It’s that time of year again. Last week, National Geographic Traveler published its “Best Trips to Take in 2020” list. A couple of weeks before that, Lonely Planet released its own popular “best” list: “Best in Travel 2020.” Fodor’s “Go List 2020” is out there too. Soon, the New York Times will drop its epic “52 Places to Go in 2020,” and we’ll be set. Even though these lists fall firmly under the click-bait category, I confess I’m a serial clicker. I love to see which destinations are getting hotter in the zeitgeist (and especially which places in my world of Central and Eastern Europe). I noticed Bucharest wiggled its way onto the list at Fodor’s as a romantic getaway (love the pick, not sure about the reason). National Geographic showered some love on tiny Telč, along the Bohemian-Moravian provincial border in the Czech Republic. There’s rarely any rhyme or reason to these things, but that’s part of the fun.

Last year, I decided to make my own list of places to go. If the big guys can do it, why not me? It was a lot of fun and helped me to organize my travel during the year. With that same hope for the coming year, here’s my selection of “10 Places To Visit in 2020 (If You Happen to Write a Blog on Central Europe).”

Top photo: The year 2019 whetted my appetite for all things Ukraine, and in 2020 I hope to visit more places, like the old seaport of Odessa (see map, below) on the Black Sea coast (looking special here even through the raindrops). Photo by Viacheslav Bida on Unsplash.
Posted in Diversions, On The Road and tagged #ten #2020 #listicle #travel #central europe, Belgrade, Mikulov, Minsk, Odessa, Sarajevo, Tbilisi, Transylvania.
Add a comment

When I published my first list a year ago, I was skeptical of my ability to honor my own commitment. As I wrote then (and this continues to be true): for a travel writer, I’m a lousy planner. I thought for sure I’d pick out ten places and only make it to three or four. I’d have to crawl back to you, my readers, and beg for forgiveness.

As I read through the 2019 list, though, I didn’t do badly. Over the course of the year, I managed to tick off Kraków, Budapest-Amsterdam, Eastern Germany (Leipzig), Lviv, Skopje, Vama Veche, Bucovina and “Some Big City Anywhere” (in this case, London). Next week, I’ll stop at the Czech town of Třeboň on assignment for Lonely Planet. The only listed place I never made it to was the Belarusian capital, Minsk. 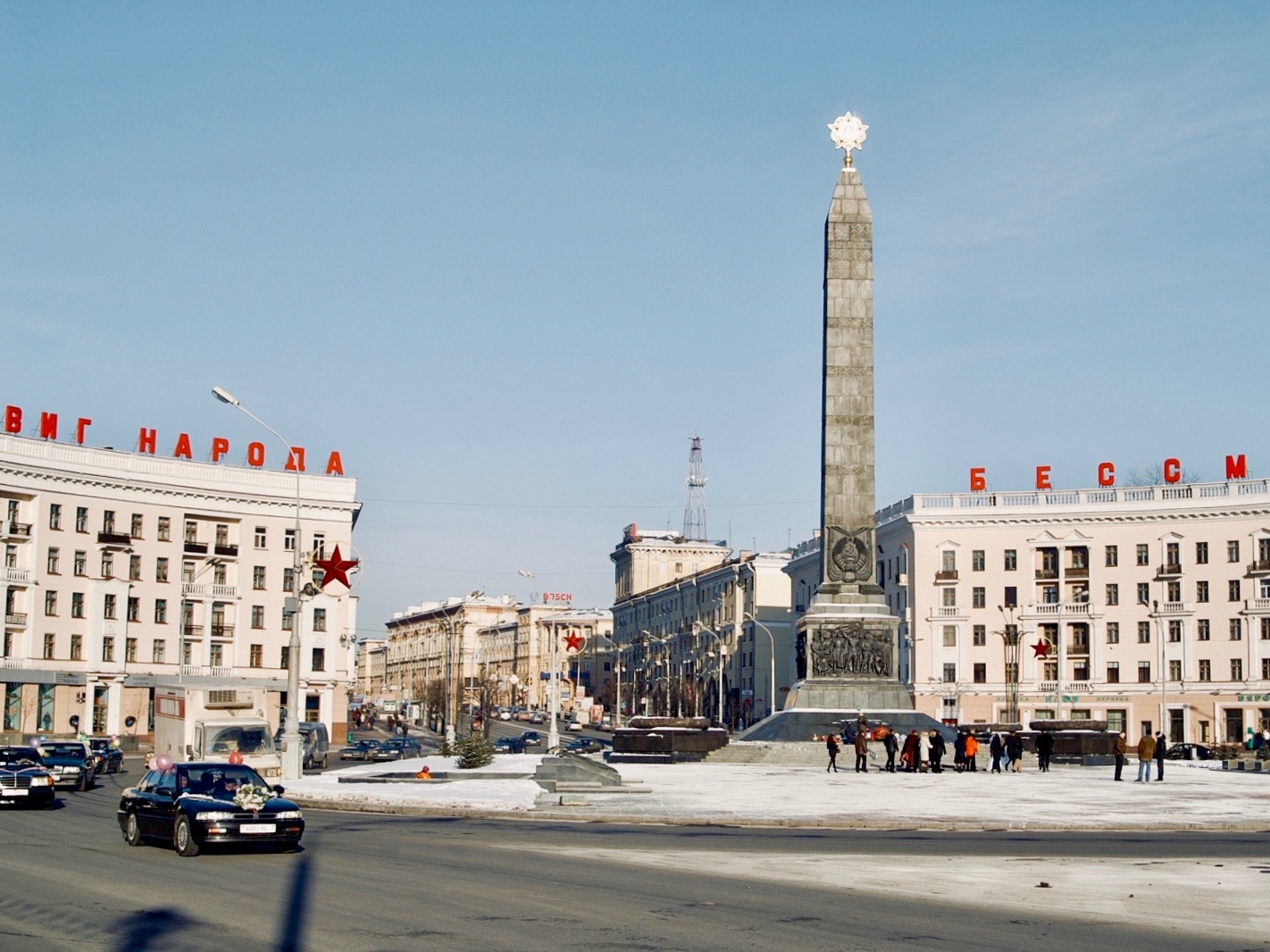 Victory Square in Minsk. The government has done their part by making travel easier, now I just have to buy the ticket. Photo: Redline (http://www.gnu.org/copyleft/fdl.html), CC-BY-SA-3.0 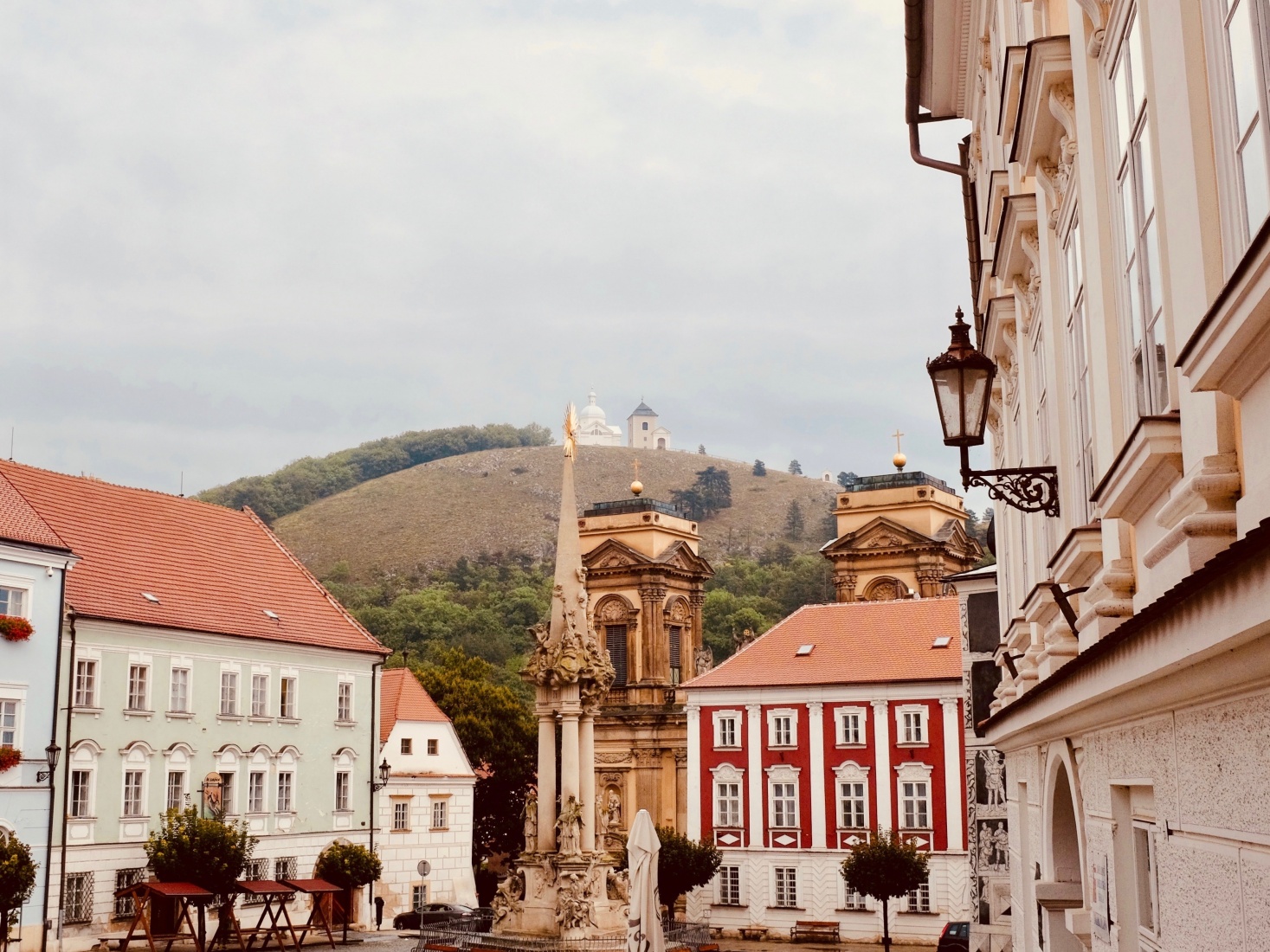 The South Moravian town of Mikulov feels like a slice of Tuscany in the Czech Republic. I've pledged to be open-minded about the wine; the countryside is perfect for hikes and bike rides. Photo by Mark Baker.

Belarusian strongman Alexander Lukashenko keeps making it easier and easier to visit “Europe’s Last Dictatorship,” which makes my failure to get here in 2019 all the more puzzling. A couple years ago, Belarus dropped the mandatory visa requirement if you arrive through Minsk airport and limit your stay to five days. That offer was later extended to a month. As I wrote last year, I’ve lived and worked in this part of Europe for three decades and never once set foot in Belarus (though I did nearly drive into it once by accident from Lithuania). One of the main themes motivating this list is to help me scratch off my travel blind spots, and this is an obvious place to start (again).

The stars are aligning to make a long-awaited serious return to Serbia’s capital city. One of my favorite editors at Lonely Planet is relocating there (sometime during the year, though she doesn't know exactly when), and a few other colleagues are rolling into town. Those are as compelling reasons as any to re-visit an energetic city that’s going through rapid changes. I passed through Belgrade this summer on a month-long trip through Central Europe, though I only put in for a couple nights and didn’t give it a real look. In 2020, I’ll fly down and stay at least a few days.

The entry for my adopted home country of Czechia in 2020 is located in the middle of wine country: southern Moravia. I’ve made a vow this year I’m going to stop reflexively slagging off the Czech Republic's wines and instead try to learn more about them. A few weeks ago, I attended a tasting of Czech wines at Prague’s Vinograf, led by house sommelier Klára Kollárová. She’s excited by the new Czech varietals, and that’s good enough reason for me to give them a second look. Besides, it’s fantastic countryside for cycling. 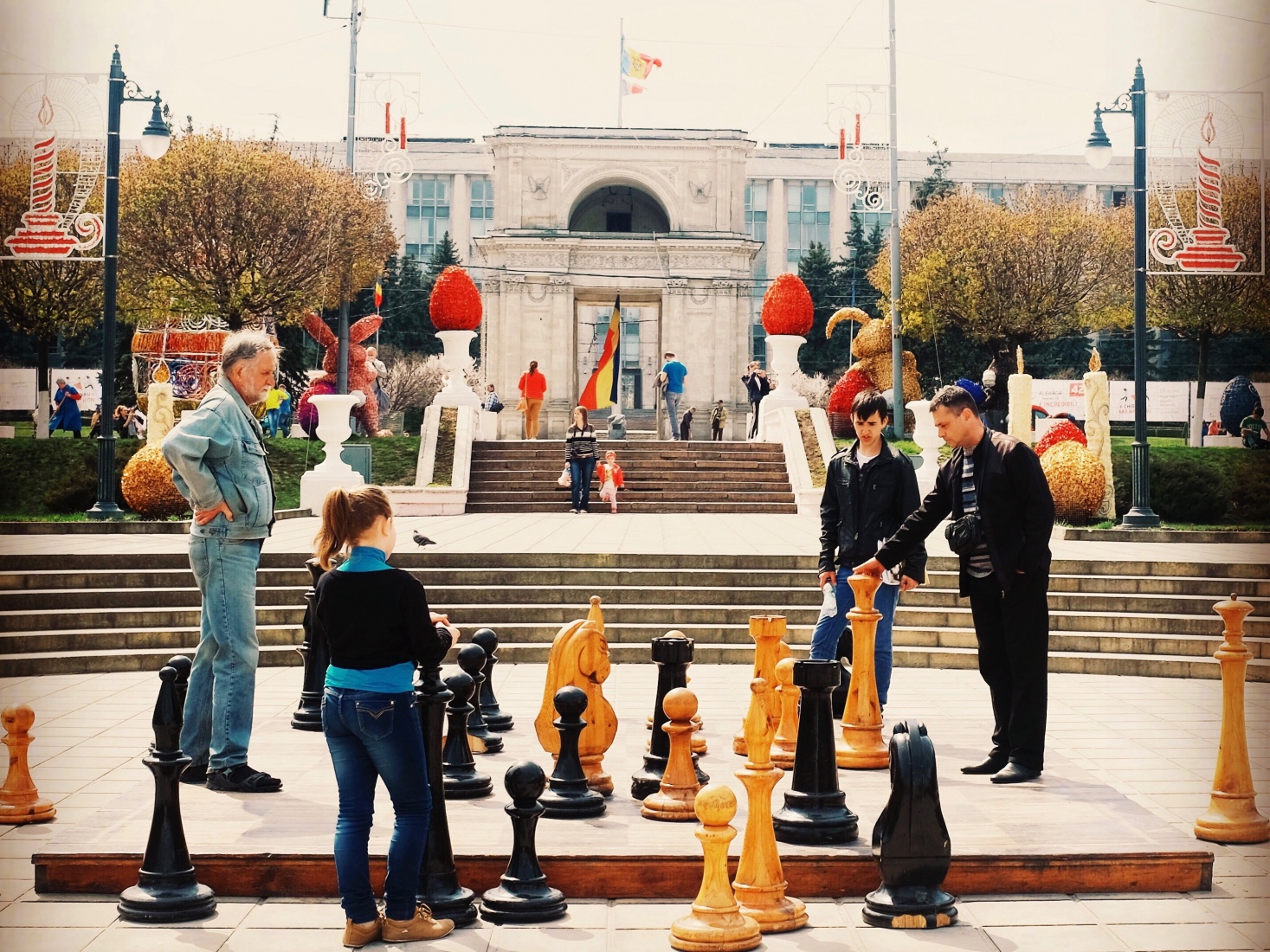 If all goes according to plan, I'll be heading back to Chișinău, Moldova in 2020. Photo by Mark Baker. 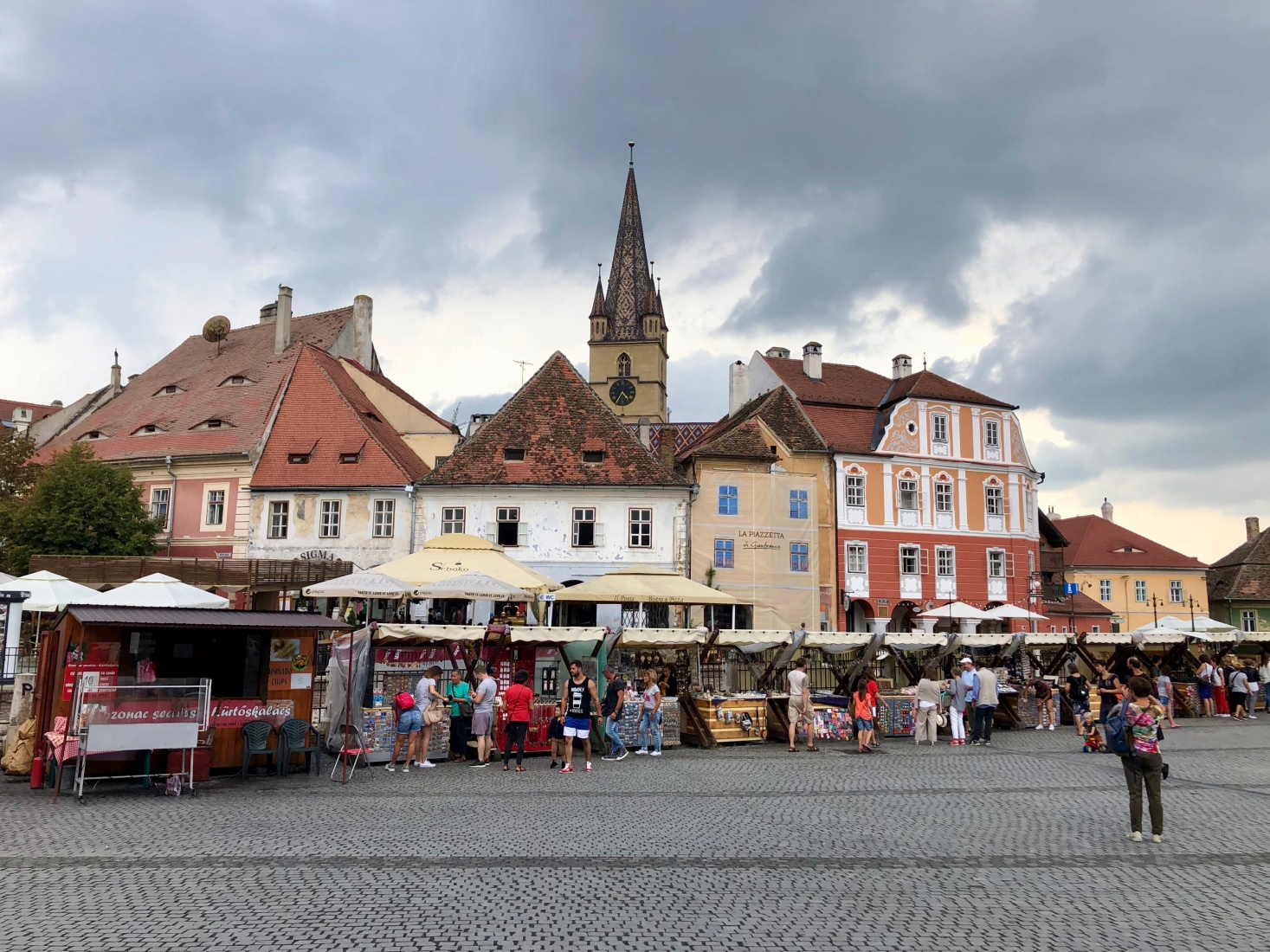 Central Sibiu, one of Transylvania's prettiest and most interesting cities. Photo by Mark Baker.

The year 2019 whetted my appetite for all things Ukraine (everything except for waiting hours in my car at the border). This summer, I scratched Lviv and Chernivtsi (Czernowitz) off the list. For 2020, it’s time to dig deeper and hit the Black Sea resort of Odessa. It ticks all the boxes: architecture, history, cheesy beach clubs. Every year, for whatever reason, I find myself at the Black Sea, and this year, I hope it’s going to be on the Ukrainian coast.

If I’m going all the way to Odessa, I might as well pair the visit to one of my favorite countries anywhere. I have some dear friends in the Moldovan capital, Chișinău, from the days I used to work at Radio Free Europe/Radio Liberty, and made some new friends a few years ago writing on Moldovan wine for Foreign Policy. Moldova is known in the business as Europe’s least-visited country, and it’s true, there aren’t many things to see and do. I love the wine and vibe, though, and a trip feels overdue.

This is the only city (suspiciously located outside of Central Europe) that I absolutely guarantee I’m going to visit (Note from the future: when I wrote this at the end of 2019, I had no idea coronavirus might spoil the party. The conference was eventually cancelled). I’ll be speaking at the TBEX Europe 2020 conference of travel bloggers and writers from March 11-13. I have no idea what my topic will be, but I’m already getting excited about hanging out with fellow bloggers and writers, and learning tips for how finally to get this blogging thing right.

Every year, I manage to find my way to Romania, and I’m sure 2020 won’t be any different. I usually hang out for a few days in Bucharest, but my favorite Romanian cities are in Transylvania. Brașov is the most attractive city in the country, and Sibiu and Cluj are good for food and going out. I’m less familiar, though, with the Transylvanian countryside, and I’d like to make that a focus for 2020. When I let my mind roam to some bucolic paradise, somewhere that might actually only exist in the mind, I conjure up a vision of a ramshackle Transylvanian village or forested footpath. In 2020, I’d like to see if that place actually exists.

I’m embarrassed to admit the last time I was in Bosnia’s capital, Sarajevo (in the 1980s), I'd barely reached the legal drinking age in the United States, and they were still talking about hosting the Winter Olympic games there. One of the regrets about my long road trip this past summer was that I didn’t leave myself enough time to explore the Balkans, especially Bosnia-Herzegovina. If I’m going to make the trek down to Belgrade, I’ll try to figure out a way to include a few more places around there too.

Reports from Tbilisi tell me I’m probably too late to the party. The Georgian capital, incredibly, is rumored to be just a year or two away from taking its spot as another overtourism poster child. That doesn’t put me off me though. Like Belarus, Georgia (and the rest of the Caucasus) is a blind spot for someone who writes a blog on Central and Eastern Europe, and there’s always Georgian food and wine. If Tbilisi gets too hot, I could sub in Yerevan, Armenia. Prague has good air connections to both cities.

My 2020 entry for a big city visit toggled between Berlin and Vienna. When people ask me about my favorite cities, both of these are on the list (though I’ve only ever spent a few days total in Berlin). In Prague, we have a full-blown Freudian case of Berlin-envy. Prague gets lots of press for being cool, though we all know in our hearts where cool really resides. What will I do in Berlin? I’m not sure. People usually spend most of their time in the former East. I’ve lived so long in a post-communist country, though, I’ve always been more attracted by the weirdness of the former West.

My hope is that this list will inspire you to think about your own lists. My best wishes in 2020 wherever you decide to go.