I normally try to avoid sharing personal, political opinions on this blog. It's not that I don’t have my own views or am afraid of expressing them, but rather because I think we’re already over-saturated in opinion. Politics tend to divide people, and besides, there are usually more-interesting things to talk about.

That said, it’s impossible to stay quiet after watching Russia’s brutal invasion of Ukraine this past week. In my view, there was no justification for the attack, no matter how hard some might try to find an excuse for it. It was an unprovoked assault on an independent country with a functioning democracy and a free press. Russia's actions have brought unnecessary suffering to millions of people and by extension endangered the security of all of us who depend on respect for international norms and laws.

There’s only so much we can do as individuals, but in my capacity as a travel writer and blogger, I wanted to use this modest platform as a place to show my support for Ukraine and to share photos from a trip I took to the west of the country in 2019. The photos demonstrate clearly that Ukraine is not some lawless state that somehow deserves its fate (as Putin would have us believe), but rather a normal country with a history and culture that will instantly feel familiar to anyone who’s spent time in Central Europe. In between the photos, I write about the unique, mind-focusing feeling of viewing this unfolding disaster from the Czech Republic, a country that (as part of Czechoslovakia) shares with Ukraine a similarly tragic history of enduring unprovoked invasions (including one by the Soviet Union in 1968). At the end of this post, I’ve listed the names (and links to donation details) of reputable aid organizations that are working to help Ukrainian refugees and people directly affected by the attack.

Top Photo: As a show of support, the Ukrainian flag hangs outside the National Museum building at the top of Wenceslas Square in central Prague. The choice of this particular building has strong historical significance. The museum was fired on by invading Warsaw Pact troops in 1968, during another period in history when Russia (then as the Soviet Union) felt that a country within its orbit might be drifting too close to the West. Photo by Mark Baker.
Posted in Diversions, On The Road and tagged 1968, Czech, Czechoslovakia, history, Putin, Russia, Ukraine.
Add a comment 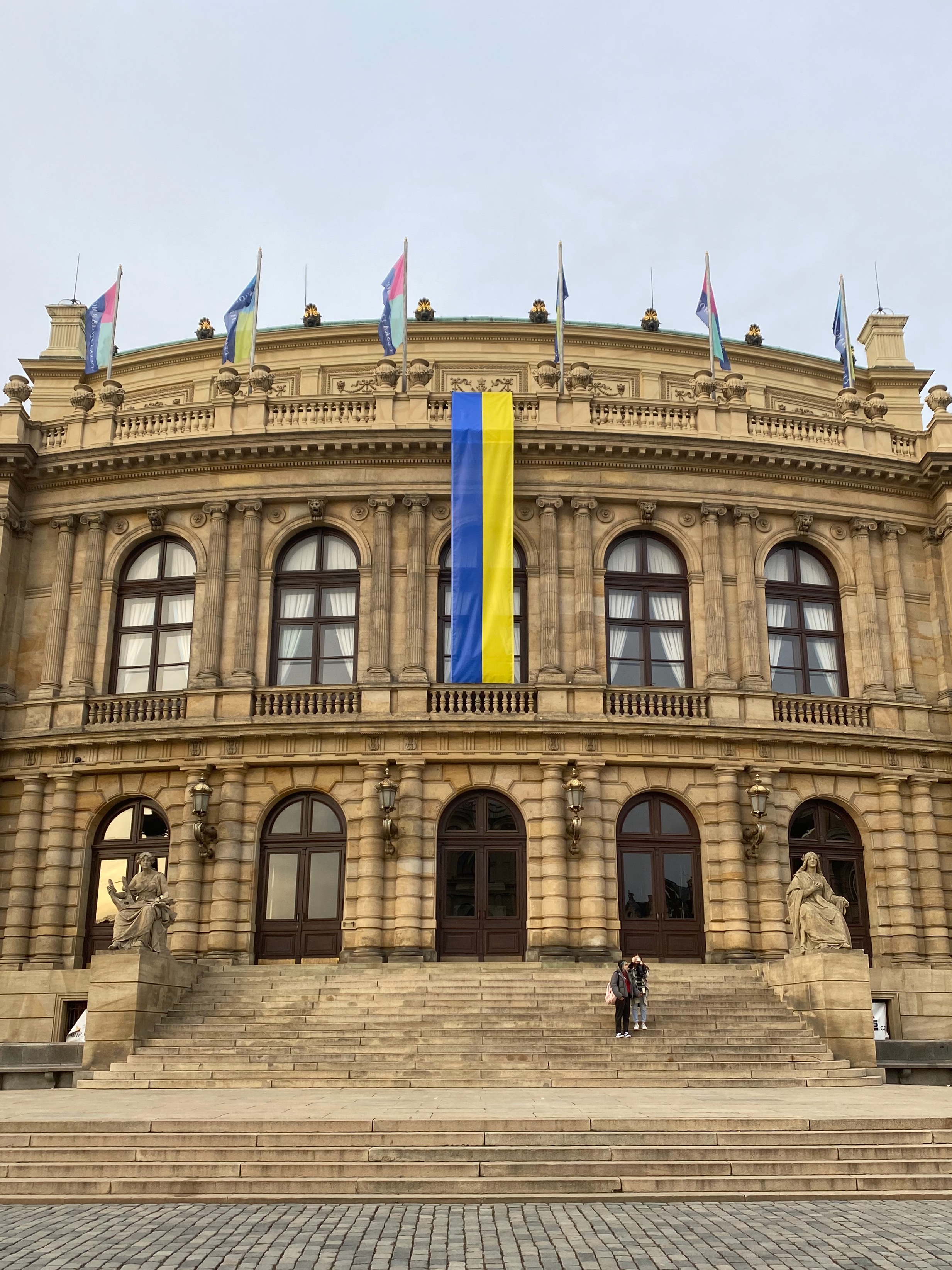 PRAGUE: The Ukrainian flag hangs from the front of the Rudolfinum concert house. The building is located on Jan Palach Square, named for the Czech student who set himself on fire in 1969 to protest the Soviet-led invasion the previous year. Photo by Mark Baker 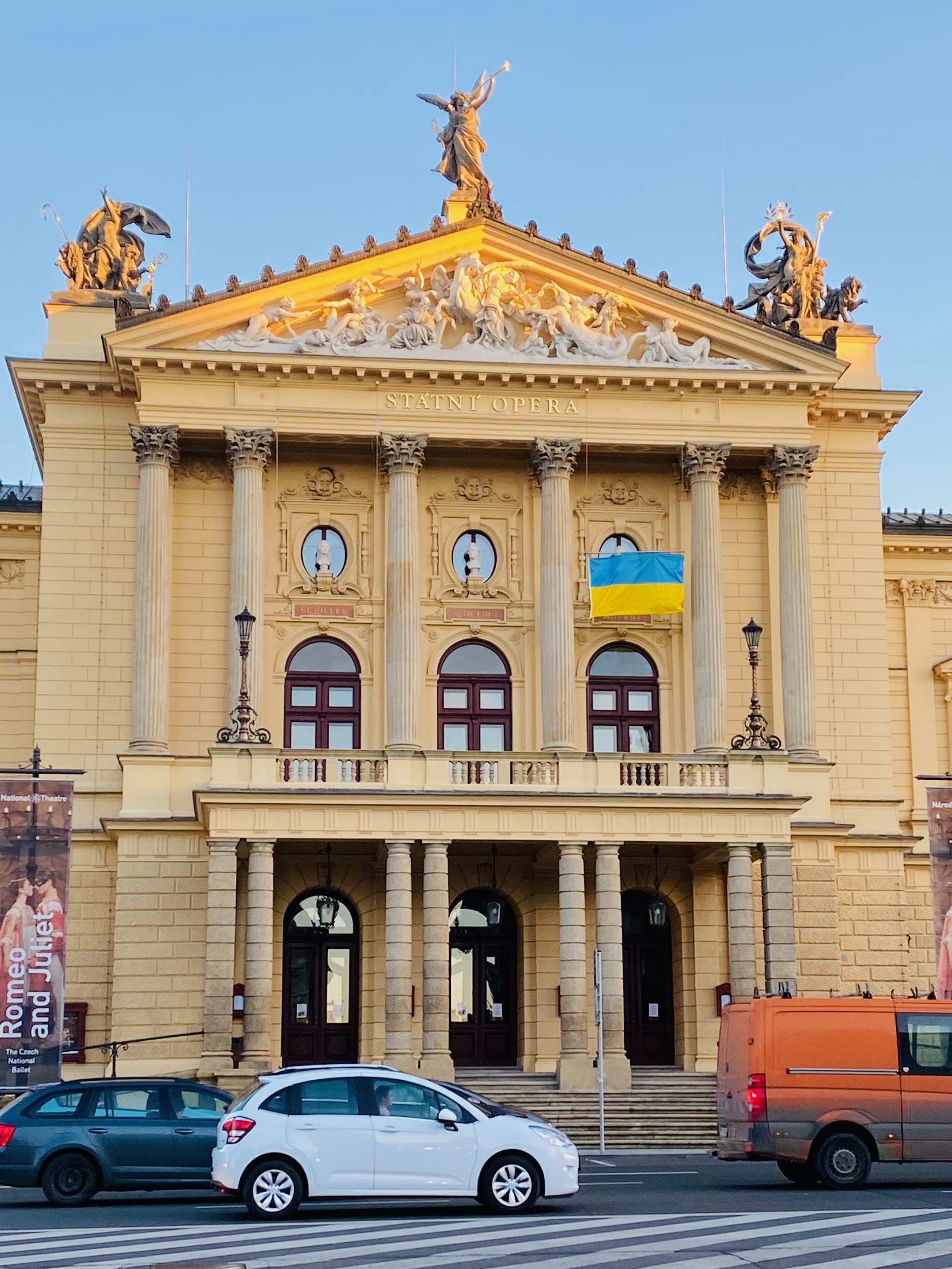 PRAGUE: Not far from the National Museum, Prague's State Opera was also prominently flying the Ukrainian flag this past week in support of Ukraine. Photo by Mark Baker

When observers reach for historical analogies to illustrate the current crisis in Ukraine, they inevitably point to disastrous events from the years 1938 and 1968. Both, as it happened, directly involved Czechoslovakia. The former is a reference to the Munich Agreement, where the leading European powers, meeting in Munich in late September that year, acquiesced to Adolf Hitler’s demands to annex the Sudetenland, a part of then-western Czechoslovakia with large numbers of German speakers. As everyone knows, Hitler didn’t stop there and within six months, he had violated the agreement and invaded the rest of Czechoslovakia. He then turned his attention to Poland and launched World War II.

The mention of "1968" refers to the Soviet-led invasion of Czechoslovakia in August that year involving several hundred thousand troops of the Warsaw Pact. Moscow justified the invasion on grounds that the political and economic reforms then underway in Czechoslovakia risked undermining the ruling Communist Party and possibly bringing the country closer to the West. The invasion put an effective end to the reforms and isolated Czechoslovakia for the next two decades. Around 140 civilians died in the attack. 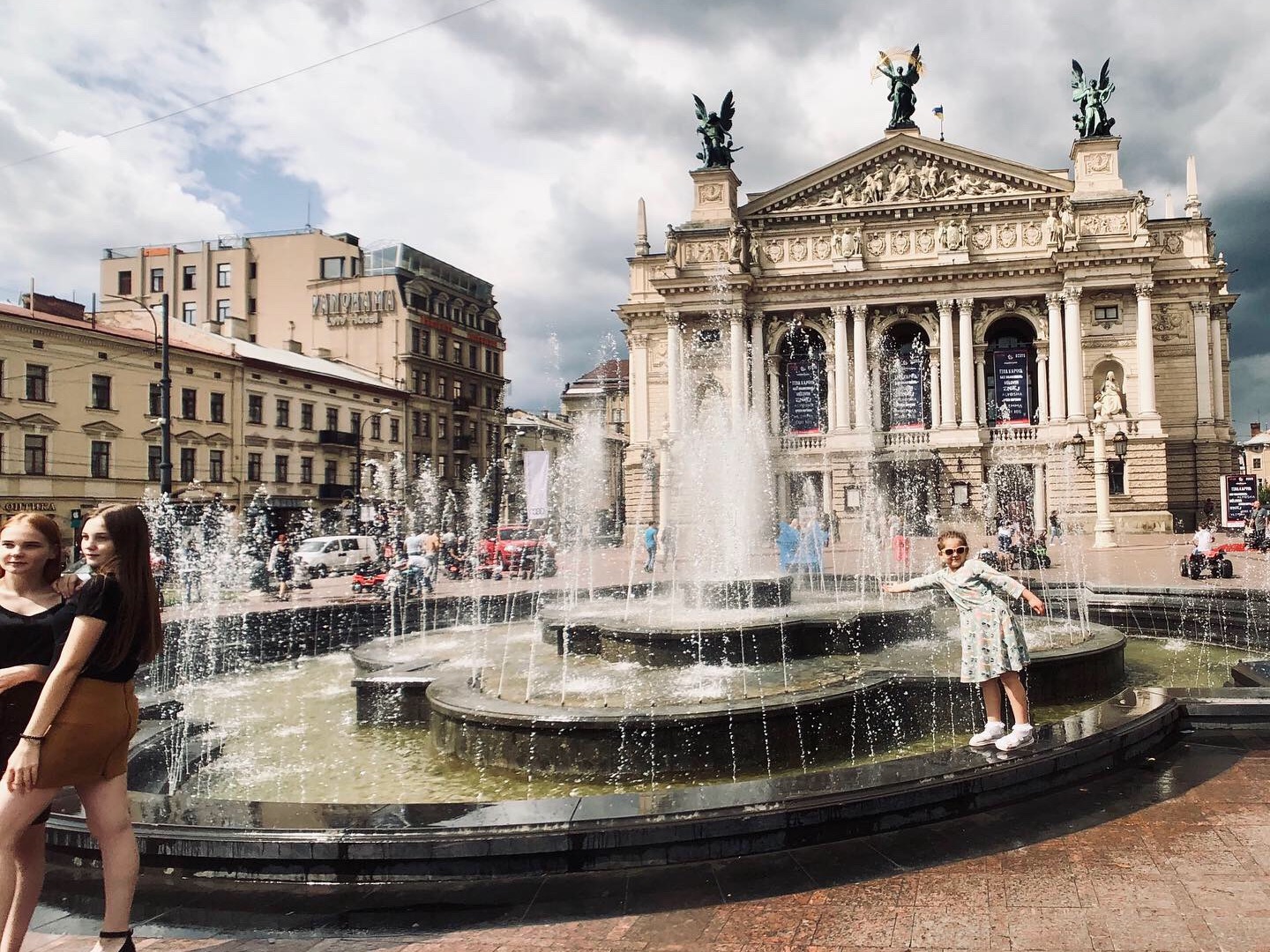 LVIV: I took this photo of the city's 'Theater of Opera and Ballet' in August 2019. The building dates from the turn of the 20th century, when Lviv was the capital of the Austro-Hungarian province of Galicia. Photo by Mark Baker 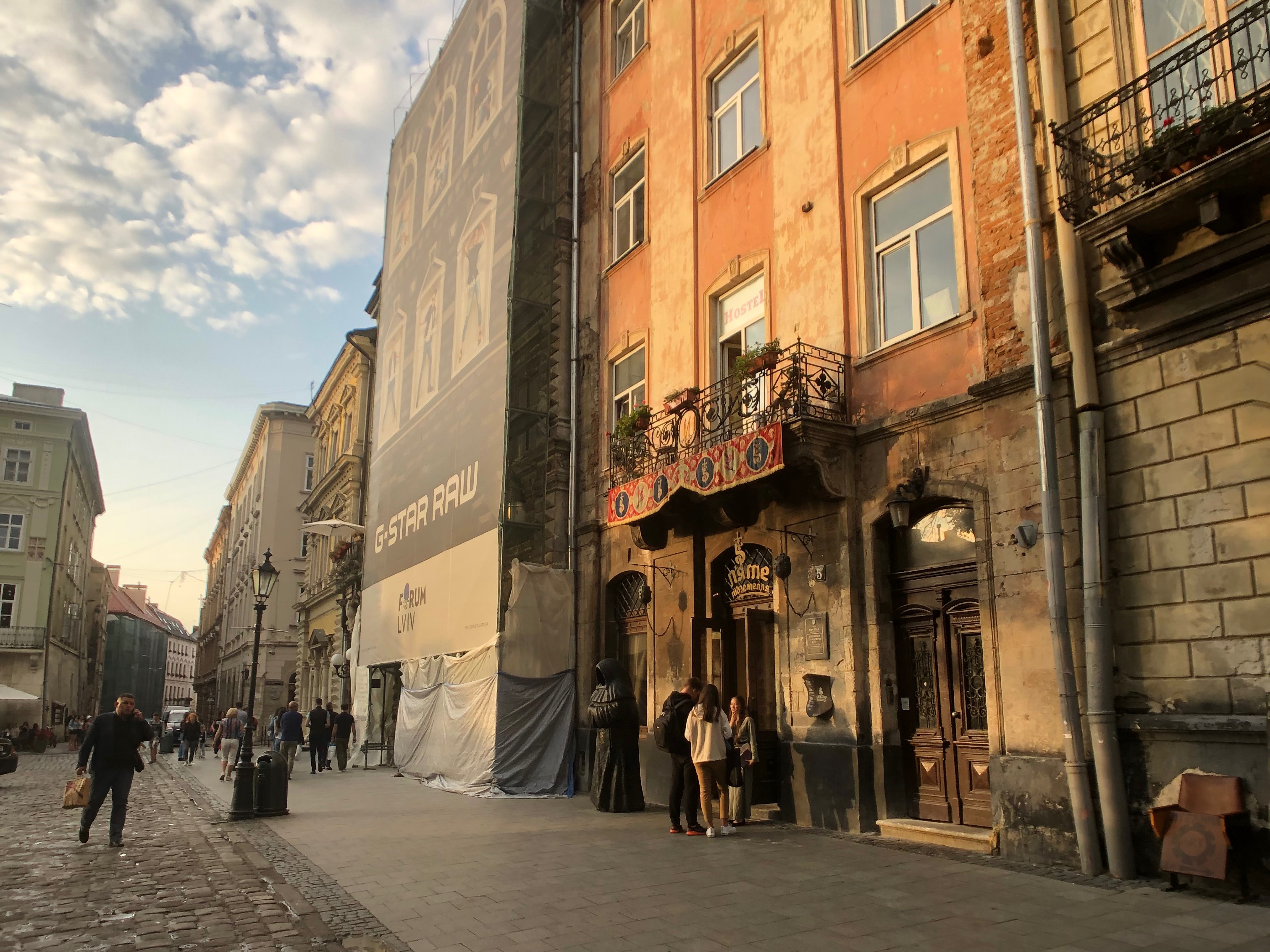 LVIV: A warm summer evening somewhere in the center of the city in August 2019. Photo by Mark Baker 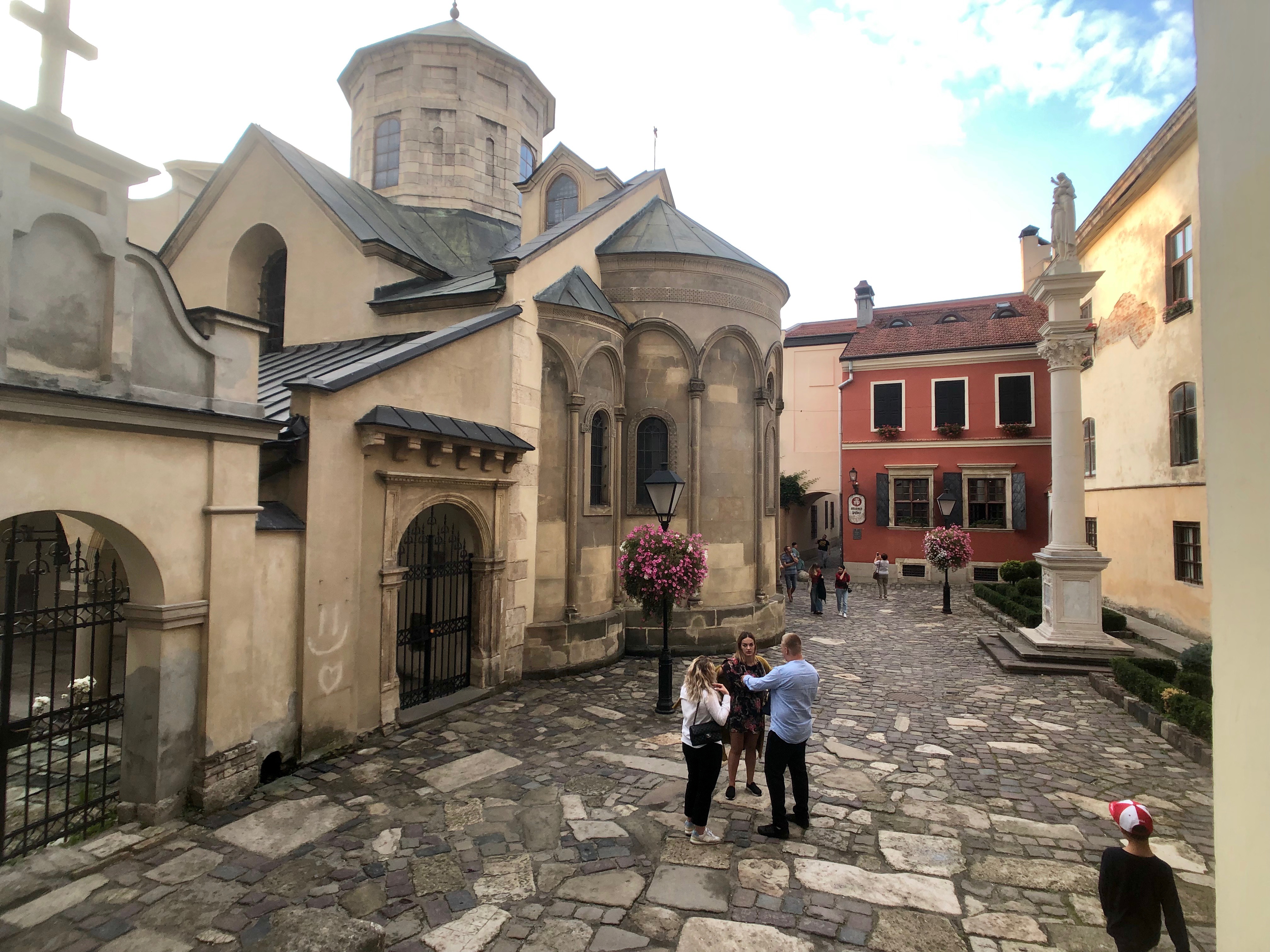 LVIV: It's a beautiful place to wander around in, with lots of hidden squares and quiet lanes. Photo by Mark Baker 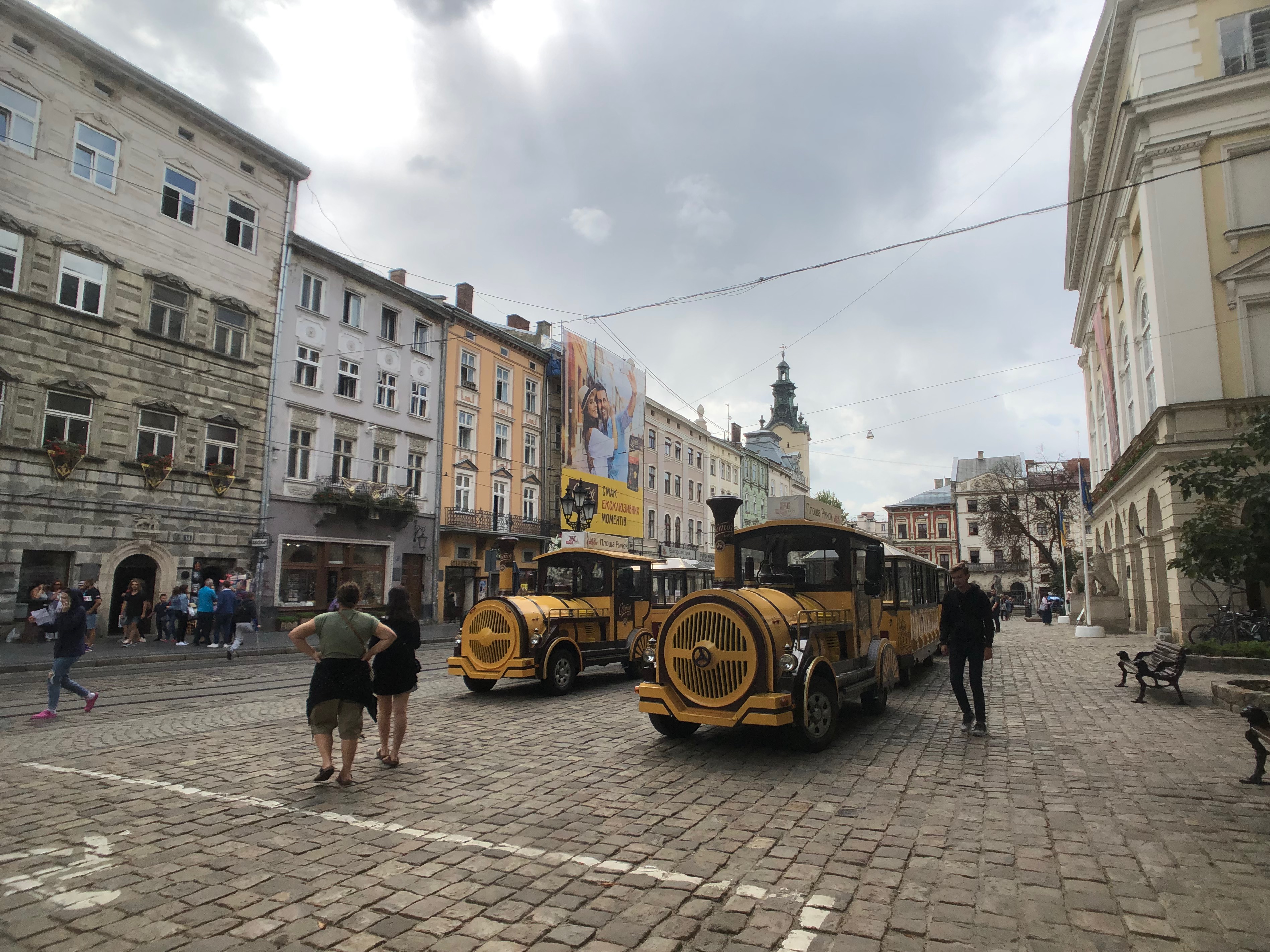 It’s usually problematic to observe current events through a historical lens, and comparing any leader or country to Hitler’s Nazi Germany or even the Soviet Union is almost always a bad idea. There are important differences between what happened then and what’s going on now. For one thing, there’s no indication (as of this writing) that Putin is actually planning to start World War III (though it’s impossible now to trust anything he says or does). In 1968, the invading Warsaw Pact armies didn't subject Czechoslovakia to a series of horrific, crippling air and missile attacks, such as what Russia has offered up in Ukraine the past few days. With the Czechoslovak army at the time mostly confined to barracks, real fire-fights were relatively isolated and sporadic.

Nevertheless, it’s not hard to see the scary, historical similarities. Echoes of the Sudetenland can clearly be heard in what Russia did in eastern Ukraine, using purported ethnic kinship as a justification for splintering off parts of the country and then attacking it. As for the notion, in 1968, that the Soviet Union was invading a country to prevent it from falling into the hands of the West – that sounds very much like a line out of one of Putin’s deranged, recent speeches about Ukraine.

It's also not hard for me, during these past few days, to share in the trauma the recent events in Ukraine have reawakened for people here in Prague. The Czech Republic and Slovakia have three decades of successful political and economic transition under their belts and have mostly healed from past historic wounds. Yet, news of Russia’s invasion has inevitably stirred up painful, long-buried memories here that I’ve somehow absorbed through osmosis from living here so long. While not everyone feels this way (the Kremlin’s disinformation campaign has succeeded in clouding some people’s judgment), my sense is that a clear majority of Czechs views Russia’s horrific actions exactly for what they are: an unjustified attack on a sovereign nation. They know this because they’ve seen this movie before from a first-row seat. This certainty has helped me to view the events in exactly the same way. 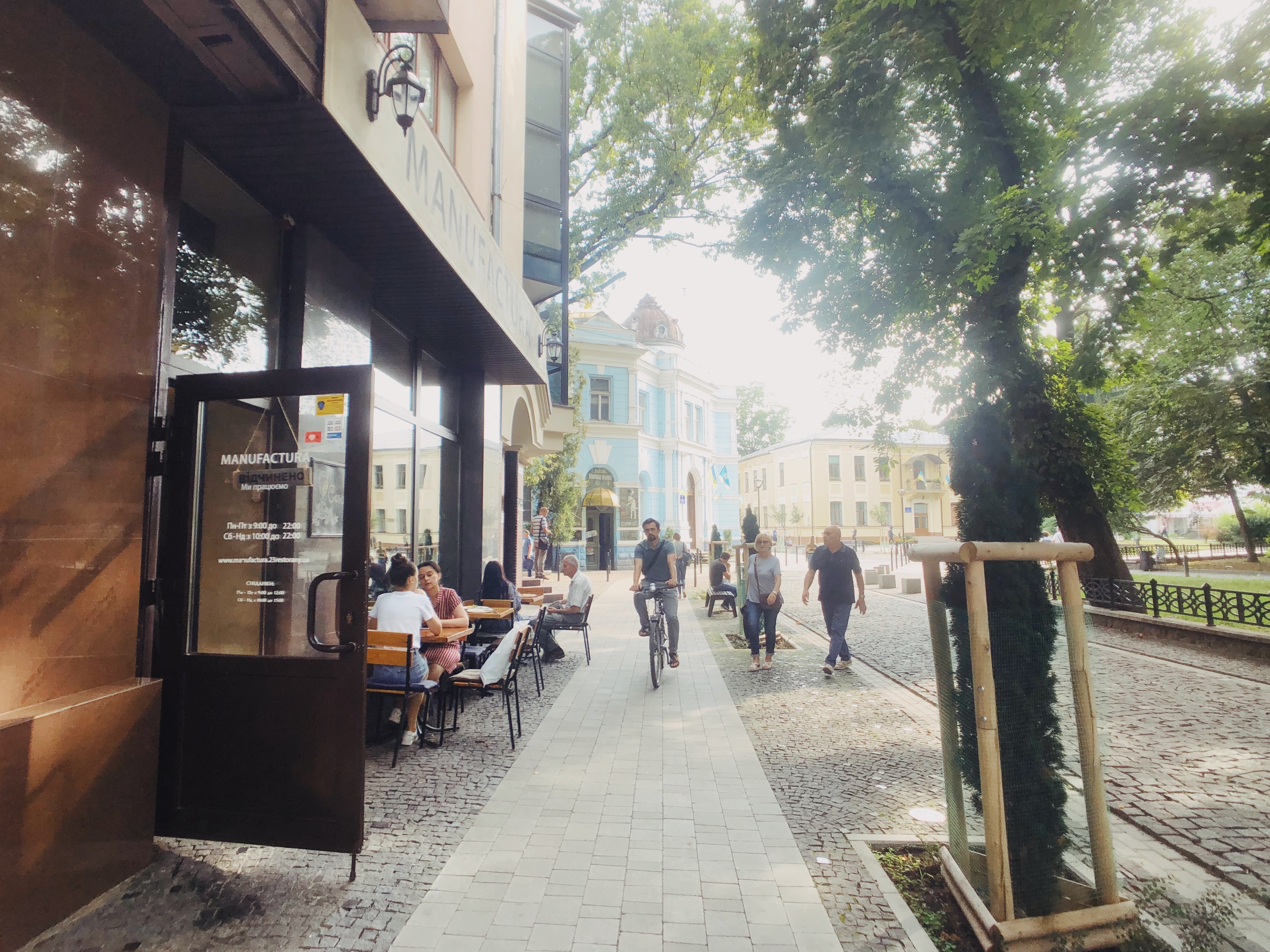 IVANO-FRANKIVSK: I didn't know what to expect from Ivano-Frankivsk. What I found was a relatively sleepy city with a green center and an optimistic tourist office that was hopeful to spread the word. Photo by Mark Baker 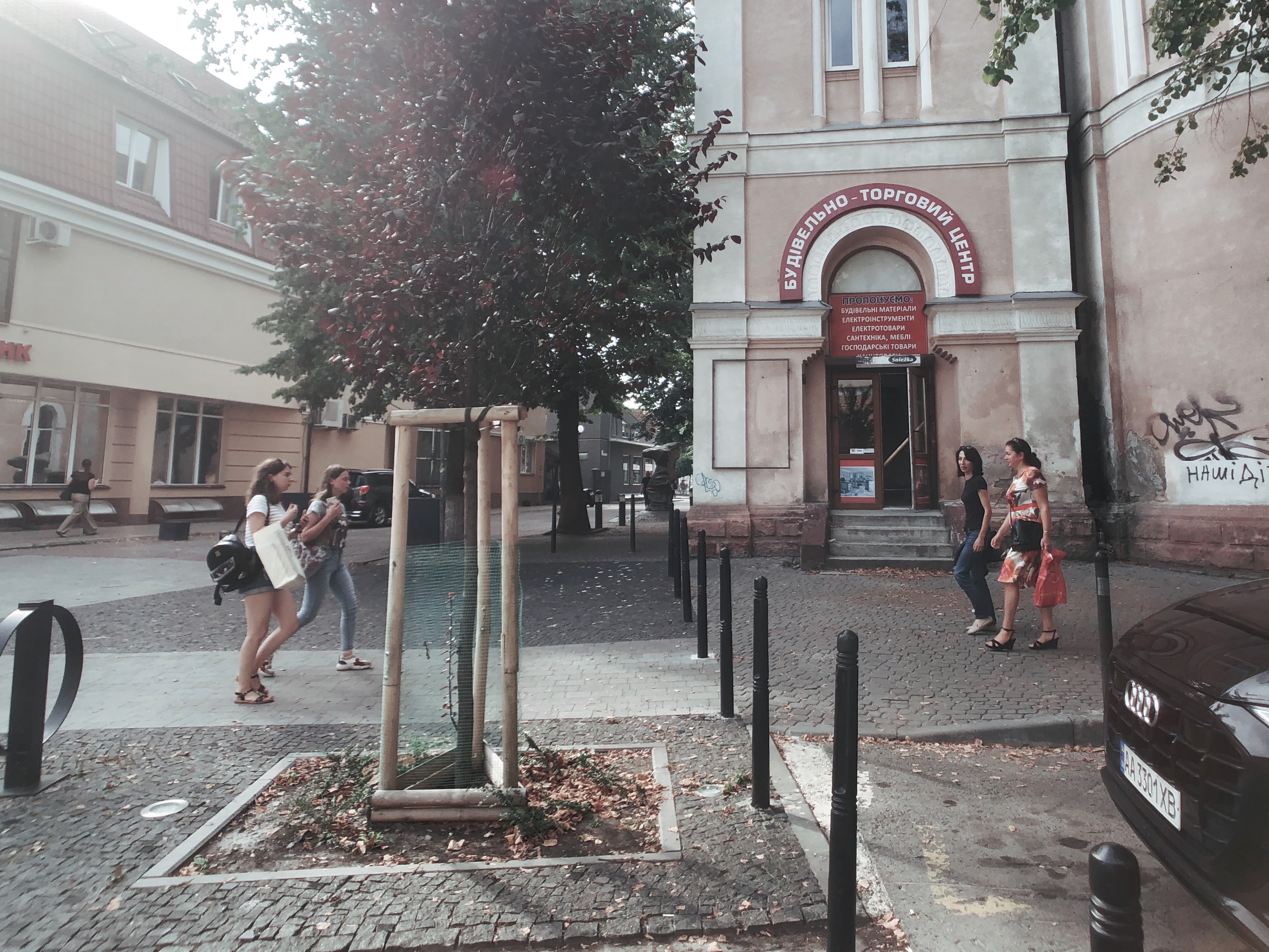 IVANO-FRANKIVSK: The building at the back is the former Tempel Synagogue, which was being renovated as a gallery or office space. The tragedy of the Nazi invasion of World War II and the destruction of Jewish lives and culture was still a visible part of the city-scape. Photo by Mark Baker 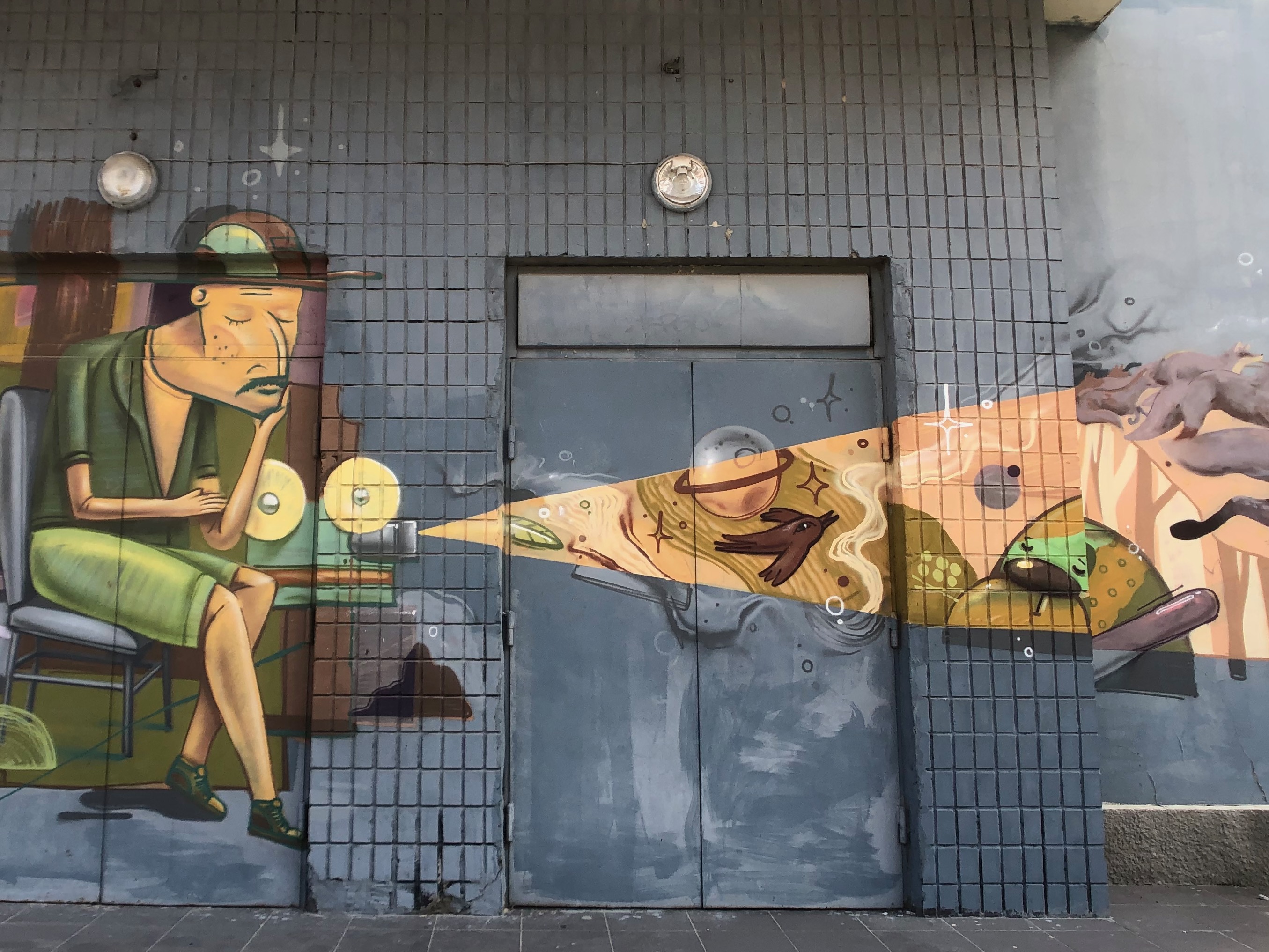 IVANO-FRANKIVSK: Some street art splashed on the back of the once-glorious 'Kosmos' cinema. The movie theater was still operating on my visit but was a shadow of its former self. Photo by Mark Baker 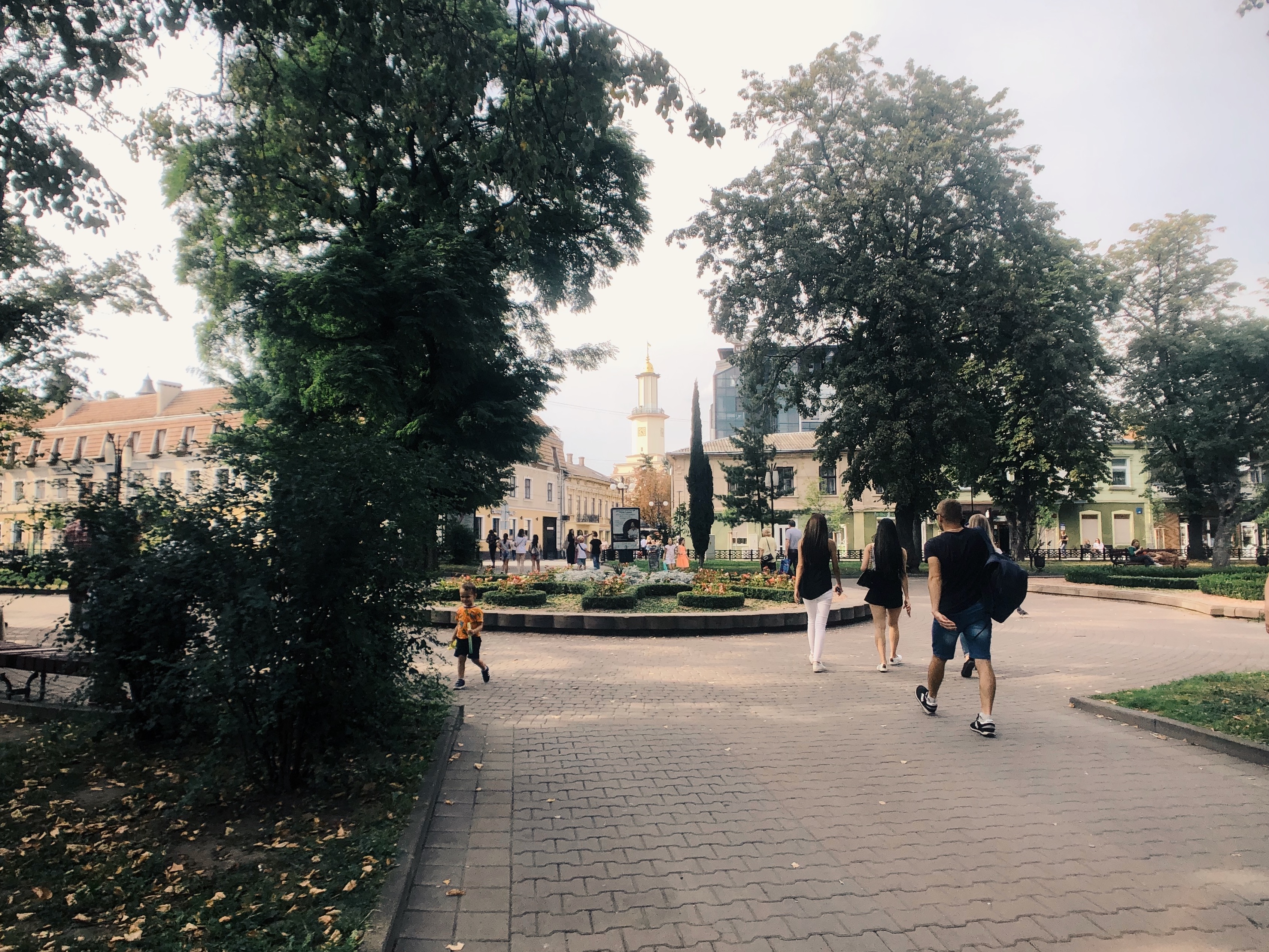 IVANO-FRANKIVSK: Another photo of the leafy park area that dominates the center of the city. Photo by Mark Baker

There’s another way, too, in which the fates of Czechs and Ukrainians now feel intertwined. I don’t see it referenced as much in writing about the current conflict, but I think it bears mentioning here. The two countries share a more-recent history of vigorous, nonviolent protest. Czechoslovakia’s 1989 Velvet Revolution, and the peaceful way that that massive, nationwide demonstration pushed the communists out of power, served as a model for “people-power” movements everywhere, including Ukraine’s own, early “Orange Revolution” in late-2004.

During the Orange Revolution, thousands of pro-democracy demonstrators occupied the main square in Kyiv and in cities around the country to protest allegations of vote-rigging in a presidential election perpetrated by the Kremlin-backed candidate, Viktor Yanukovych. In the wake of the protest, the Ukrainian Supreme Court stepped in to annul the vote, and Yanukovych’s opponent, the pro-reform Viktor Yushchenko, was eventually declared the winner.

Ukraine’s reform path since then has been anything but straightforward, and the protesters’ best intentions have regularly been thwarted by corruption, incompetence and outside interference. I still feel a kindred connection, though, between recent protests on Prague’s Wenceslas Square to oppose Russia's attack and the horrific events now unfolding in Kyiv and other cities across Ukraine. In some respects, at least, the aspiration of Ukrainians to build a pro-Western, pro-reform state began in places like Prague. Whatever happens in this current conflict, the Velvet Revolution (and the other anticommunist revolutions of 1989) will remain potent symbols that the good guys can (and do) actually win. 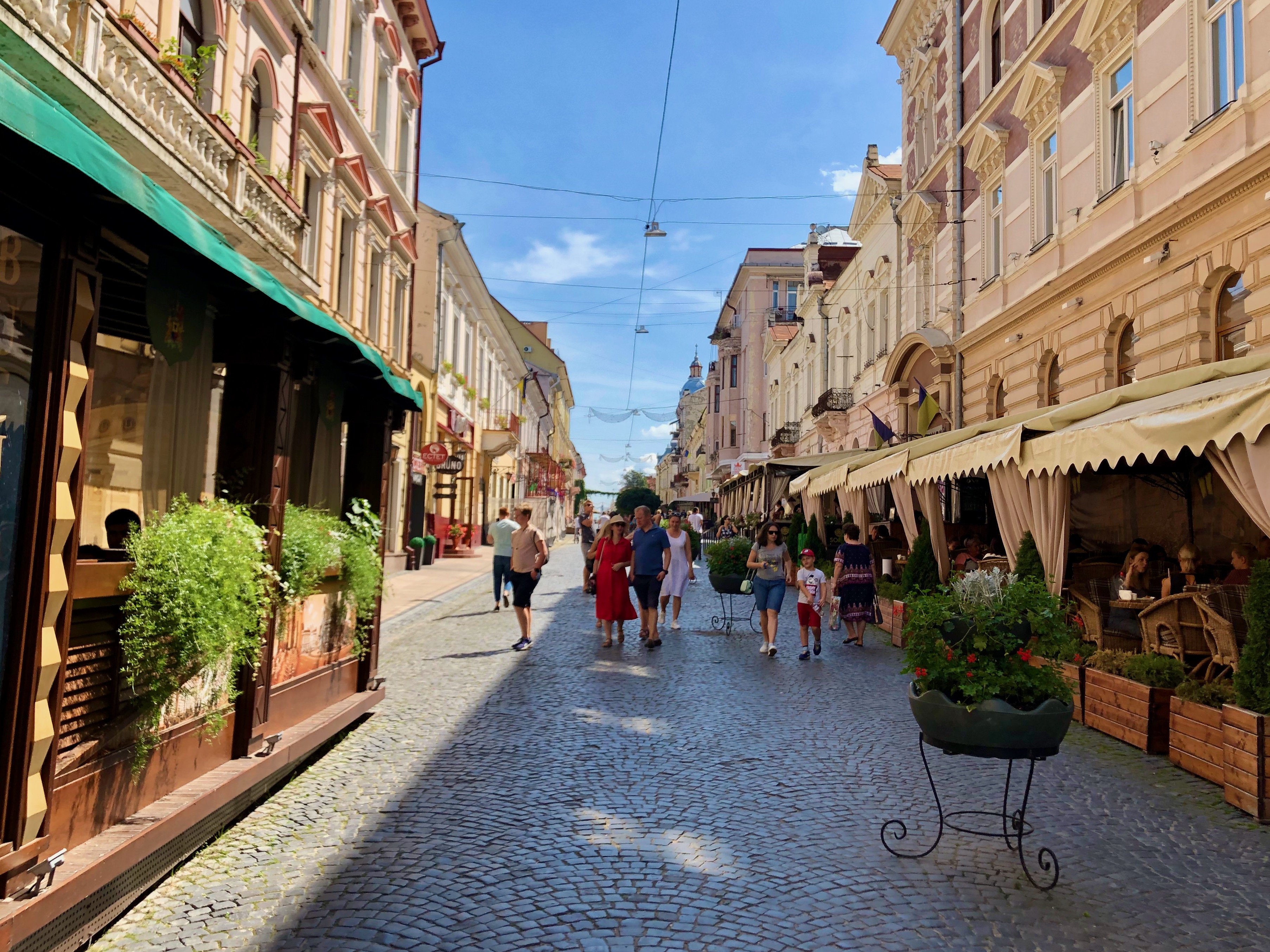 CHERNIVTSI: Elegant Kobylyans'koi street is pedestrian-only and lined on both sides by restaurants, cafes and bars. Photo by Mark Baker 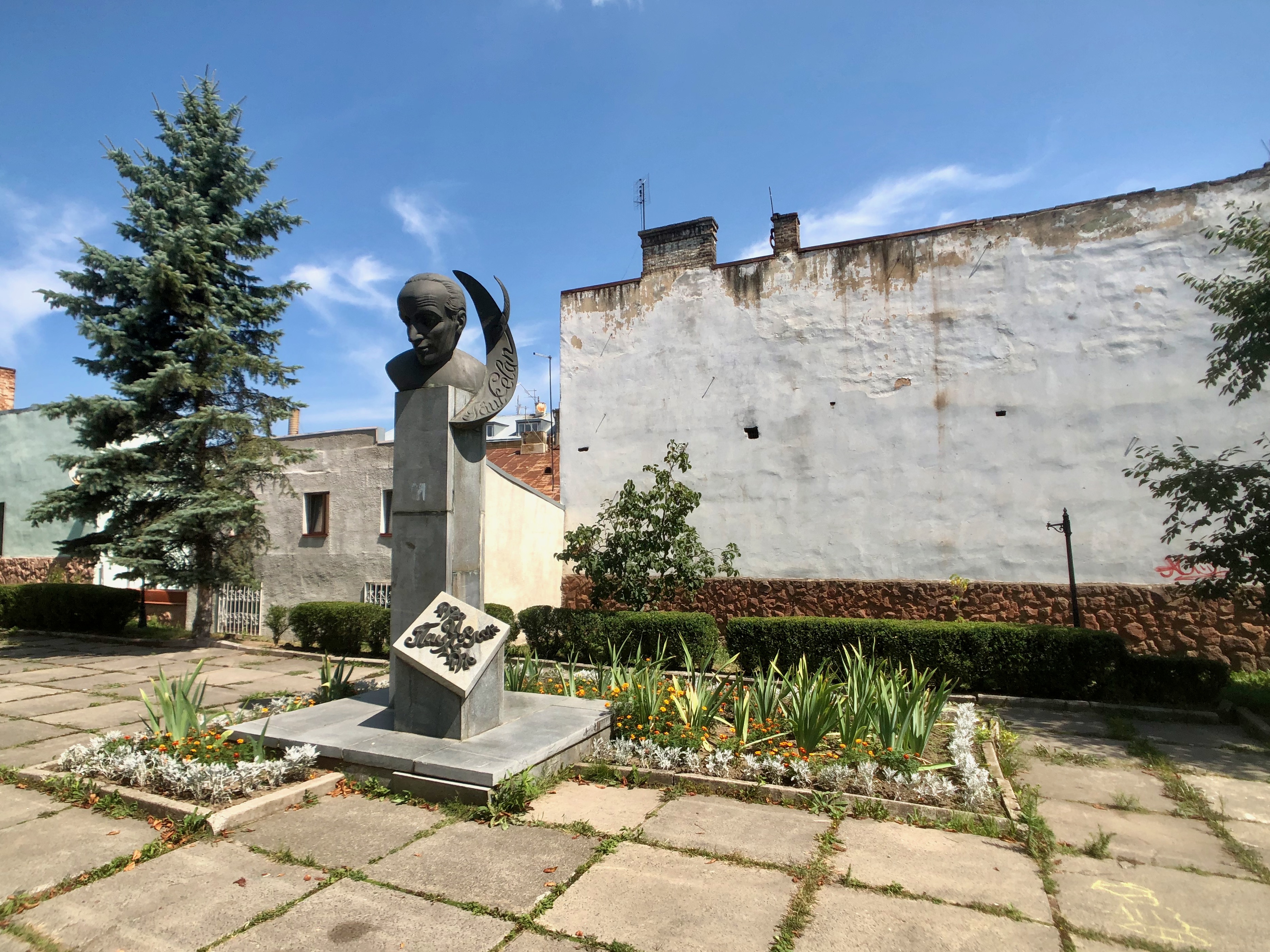 CHERNIVTSI: A memorial to local-born poet Paul Celan (1920-70). Celan lost both parents in World War II at extermination camps and went on to become one of the most influential poets of the post-war era. Photo by Mark Baker 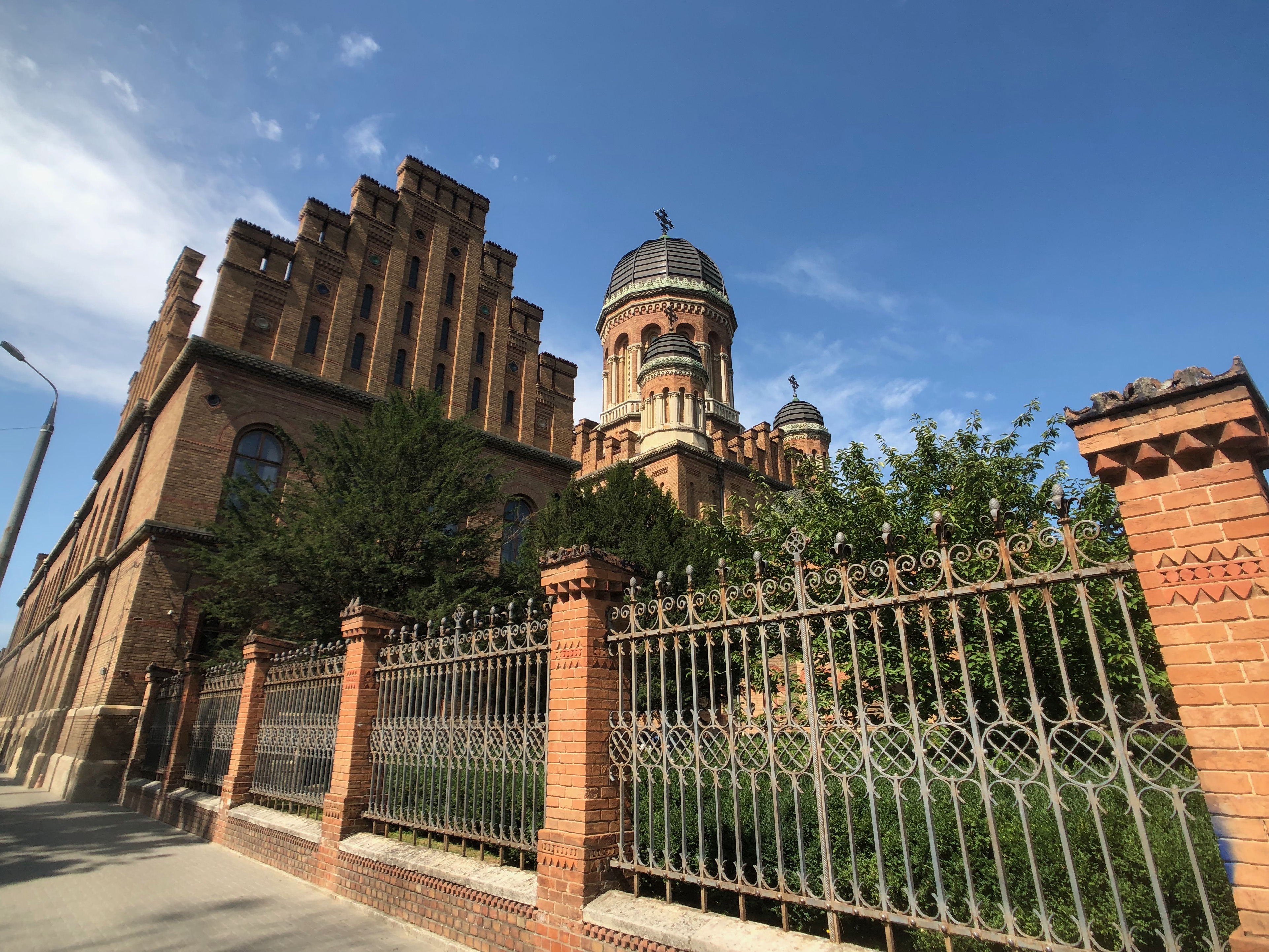 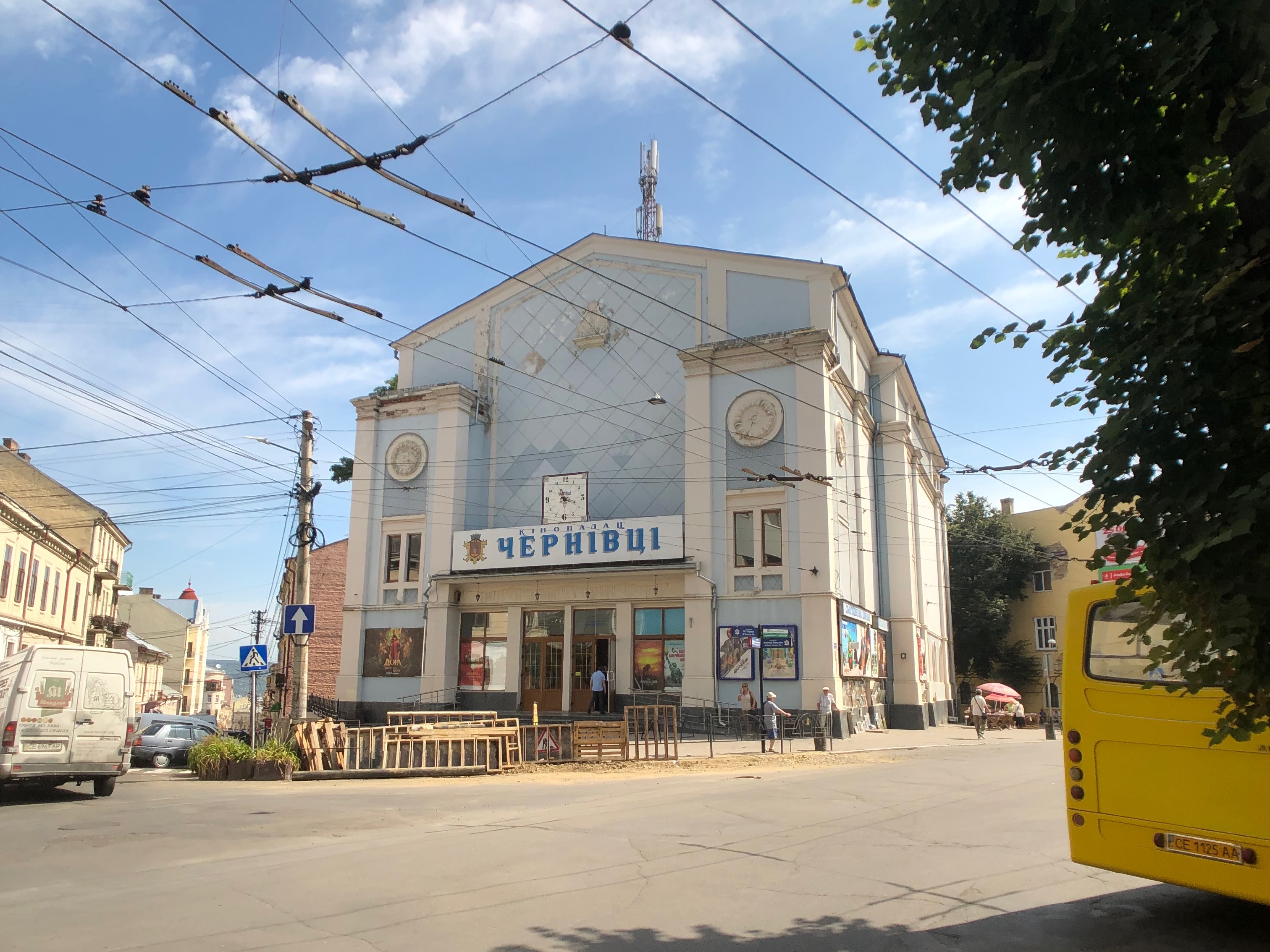 CHERNIVTSI: The former main synagogue was partially destroyed in World War II and refurbished into a movie house in the decades after the war. It's referred to here affectionately as 'Kinogoga.' Photo by Mark Baker

In the summer of 2019, I started a long road trip across Central and Eastern Europe that took me through parts of western Ukraine. I hadn't spent much time in the country before that. Ukraine was becoming so popular among travelers and backpackers that I felt I needed to see it for myself if I ever wanted to write about it for a magazine or guidebook. The trip was part of a wider journey through Romania, Bulgaria, Northern Macedonia and Greece, and I wasn’t able to spend much time in Ukraine. Nevertheless, I managed to carve out a few days each in the cities of Lviv, Ivano-Frankivsk and Chernivtsi. What I found was a charming, normal European country with some beautiful countryside and culturally rich and interesting cities. The photos I’ve posted here are from that trip.

Finally, for anyone wanting to help Ukraine and Ukrainians in their current distress, I asked friends in the know for their ideas on some of the best aid organizations working in the field. Here are some of their suggestions (click on the link to pull up donation details):

To Help Animals in Ukraine

(Please note I’m not endorsing any of these groups, but simply sharing the suggestions of people whom I trust. MB)