Fittingly for a year spent thinking about, traveling along, or sailing down the Danube, I’ve just finished another cruise along that allegedly blue river. This one was a “Christmas Markets” cruise that sailed from Nuremberg down to Budapest (see map, below). For this trip, like for the earlier cruise I wrote about here and here, I was working for the National Geographic Society as a destination expert. In those previous posts, I covered the gamut of what it's like onboard a cruise and what a destination expert is supposed to do. Rather than rehash what I wrote there, I’ll post photos from the trip and tell the story through the captions.

From Nuremberg, the cruise led to Regensburg and Passau, from where passengers could take a day trip to either Salzburg or Český Krumlov. From here, we sailed to Melk and Vienna, and finally wrapped up in Budapest on Sunday (December 9). Unlike last time, the water levels held, and we were able to finish the cruise on the same boat.

Top Photo: Santa Claus sits high atop the little Bavarian town of Abensberg, near Regensburg. Just one of the sights I'd never expected to see on an eight-day cruise down the Danube River. Photo by Mark Baker.
Posted in Diversions, On The Road and tagged Austria, Budapest, cruise, Danube, Germany, Hungary, National Geographic, Nuremberg, river cruise, Scenic, Vienna.
Add a comment 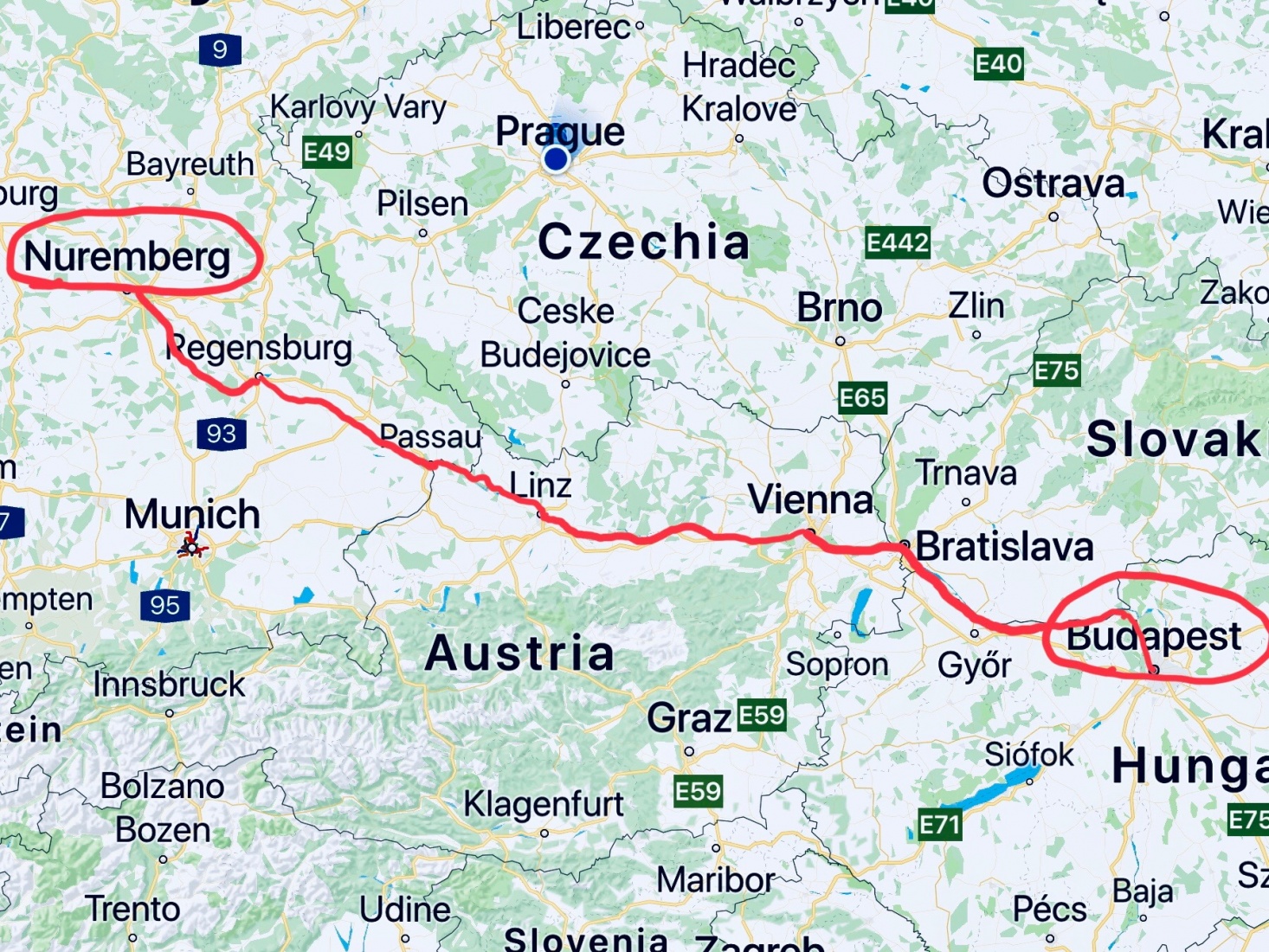 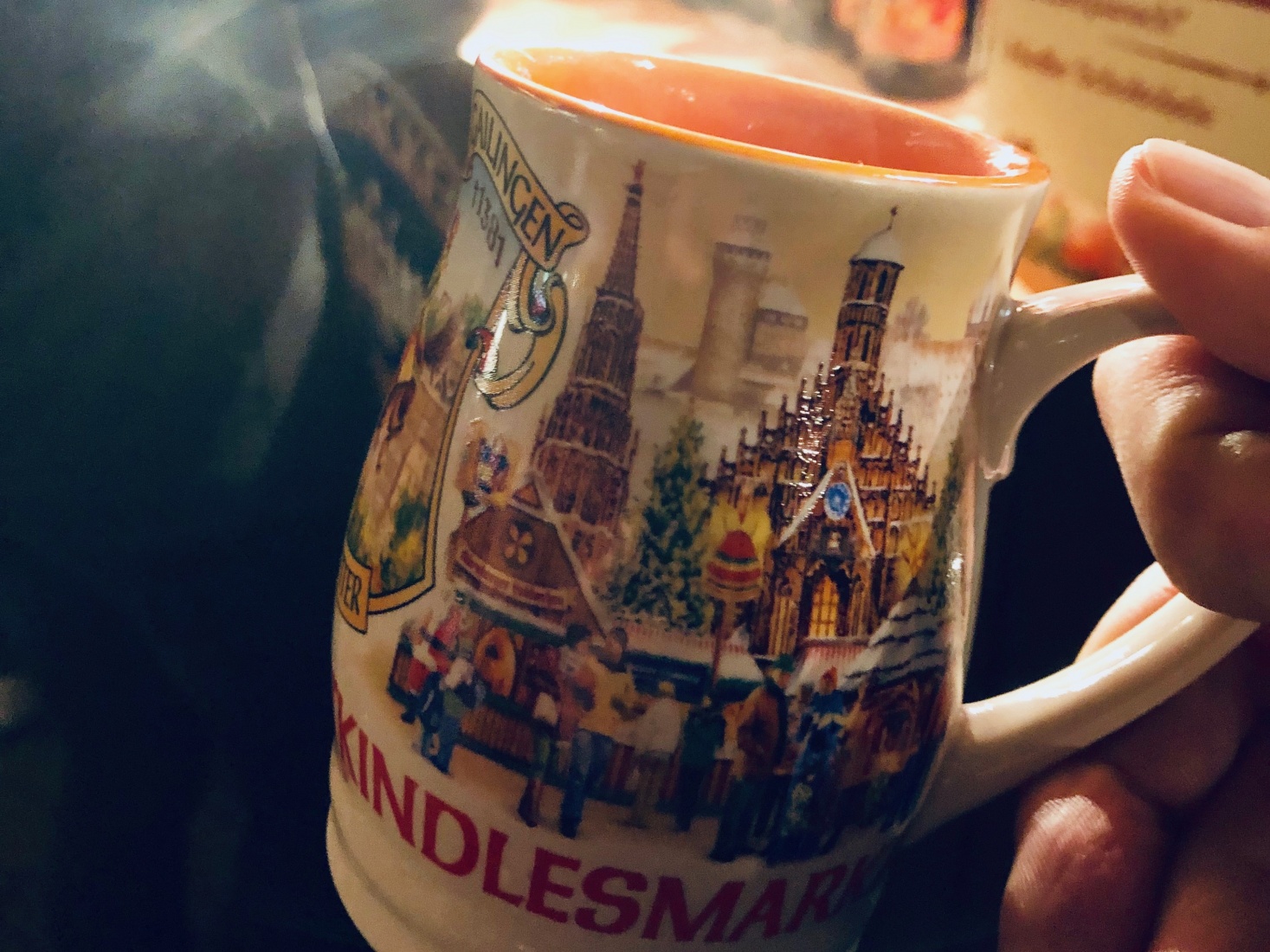 The trip began at the German port of Nuremberg. I traveled there from Prague a day early to sample a bit of the Christmas market on my own -- and to make sure that the mulled wine was "cruise ready." It turned out to be the best hot wine I drank on the entire trip. Photo by Mark Baker. 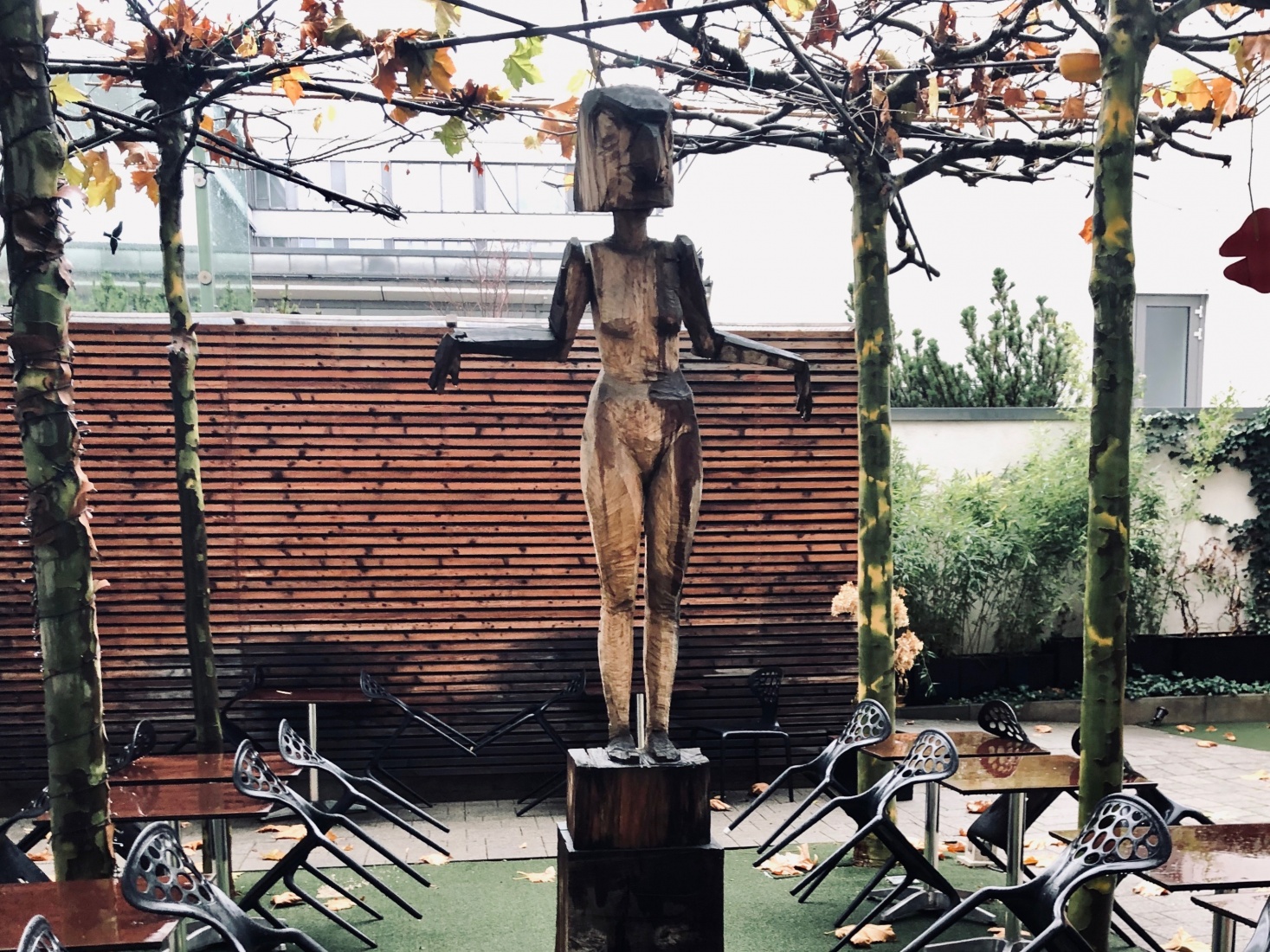 The concept of the 'art' hotel has spread through the lodging industry like a sexually transmitted disease. Some of the hotels are good, some are bad, but all are cheesy. The 'Art & Business' hotel that I stayed at in Nuremberg on the first night is on the "good" side, but has its cheesy elements too, like this statue in the garden. Photo by Mark Baker. 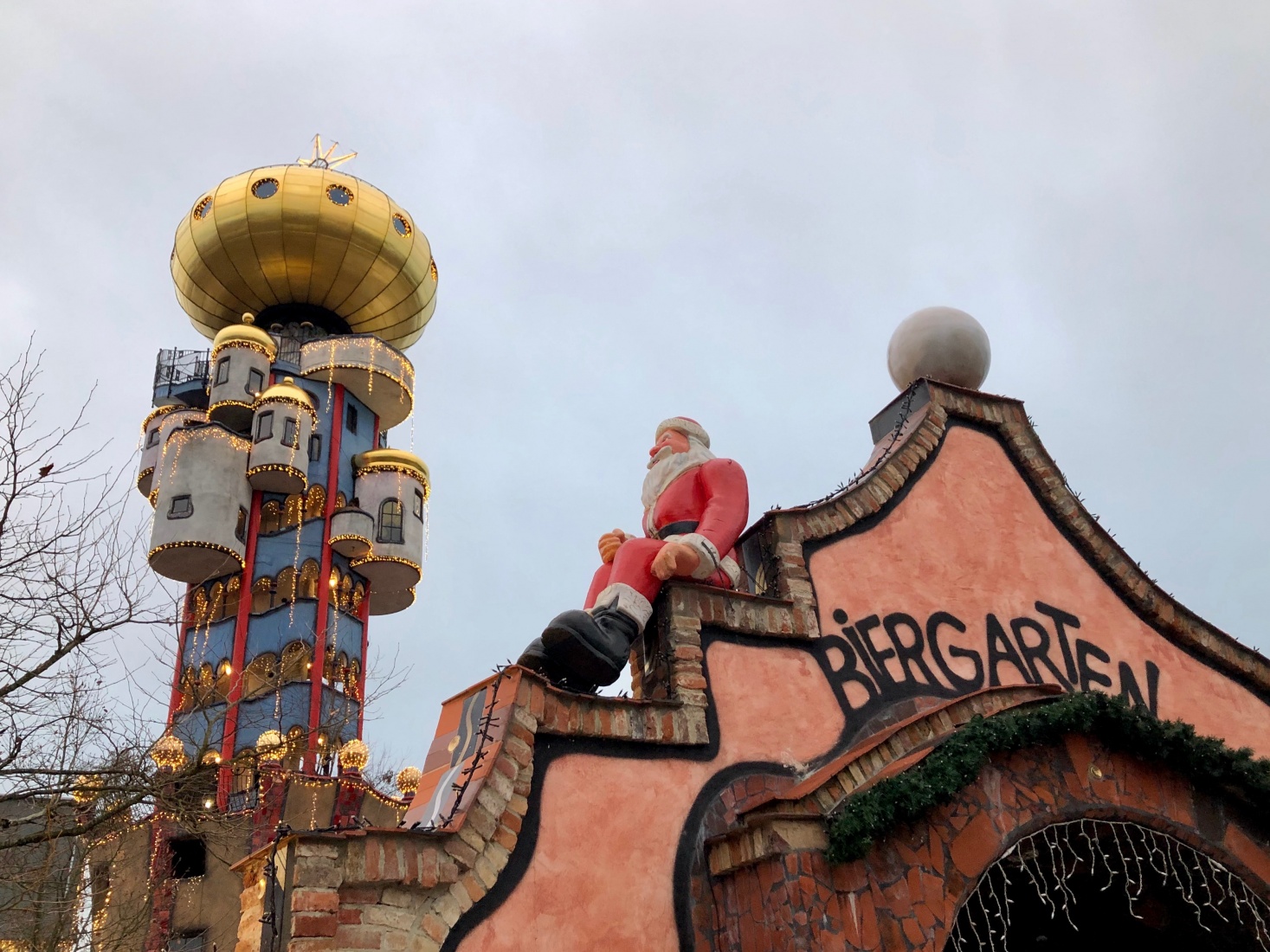 From Nuremberg, the boat sailed along the Main-Danube canal to the city of Regensburg. One of our off-boat excursions from Regensburg was to the kooky Kuchlbauer brewery. It's presented as an "Art Meets Beer" experience. The brewery tower was designed by Austrian artist Friedensreich Hundertwasser. During the tour, we learned that the brewery's owner claims to have solved the riddle of Leonardo Da Vinci's "The Last Supper." Photo by Mark Baker. 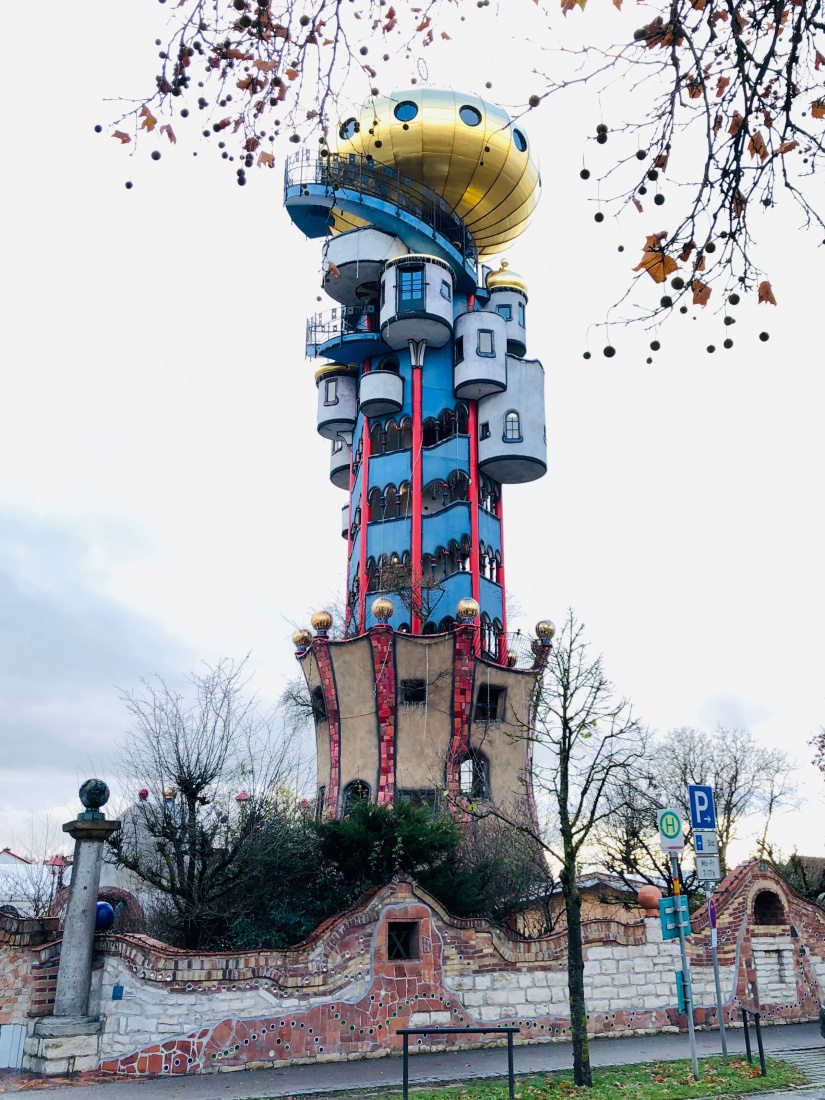 This is another shot of the Hundertwasser Tower at the Kuchlbauer Brewery near Regensburg. The brewery is famous in this part of Germany for its wheat beer and also its eye-catching visuals. The tower is visible for miles around. Photo by Mark Baker. 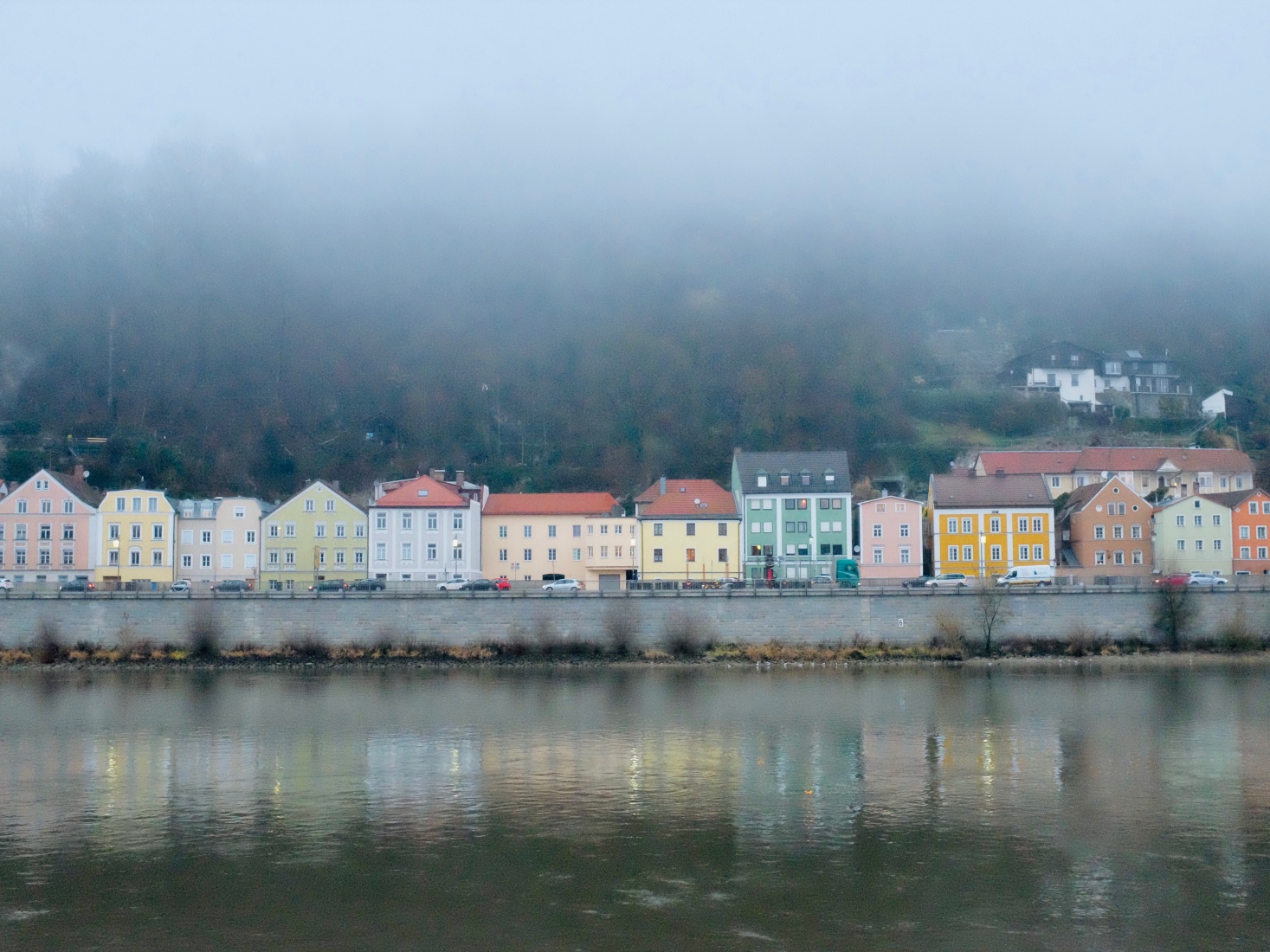 From Regensberg, we sailed on to Passau, a historic port that stands at the confluence of three rivers. This shot of the Passau waterfront on a foggy morning got something like 200 likes on Instagram in the first couple of hours (yay!). It was the first cold morning of the trip and those houses did look good with a light crown of fog. Photo by Mark Baker. 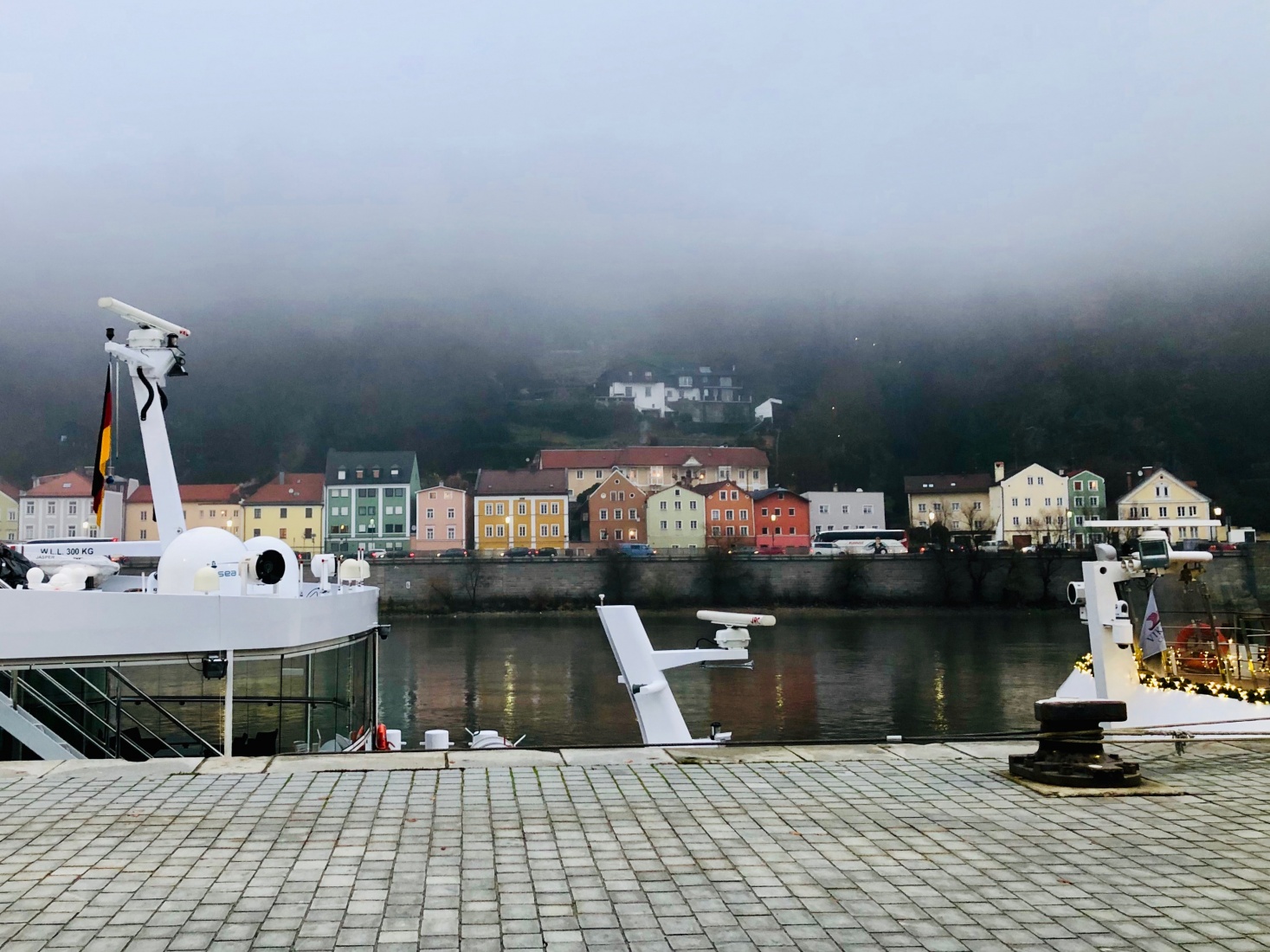 This is the nose of our boat at Passau, Germany. We didn't spend much time here, but Passau looks like the kind of place I'd like to visit on my own. It has tons of students, lots of history and some great architecture. Photo by Mark Baker. 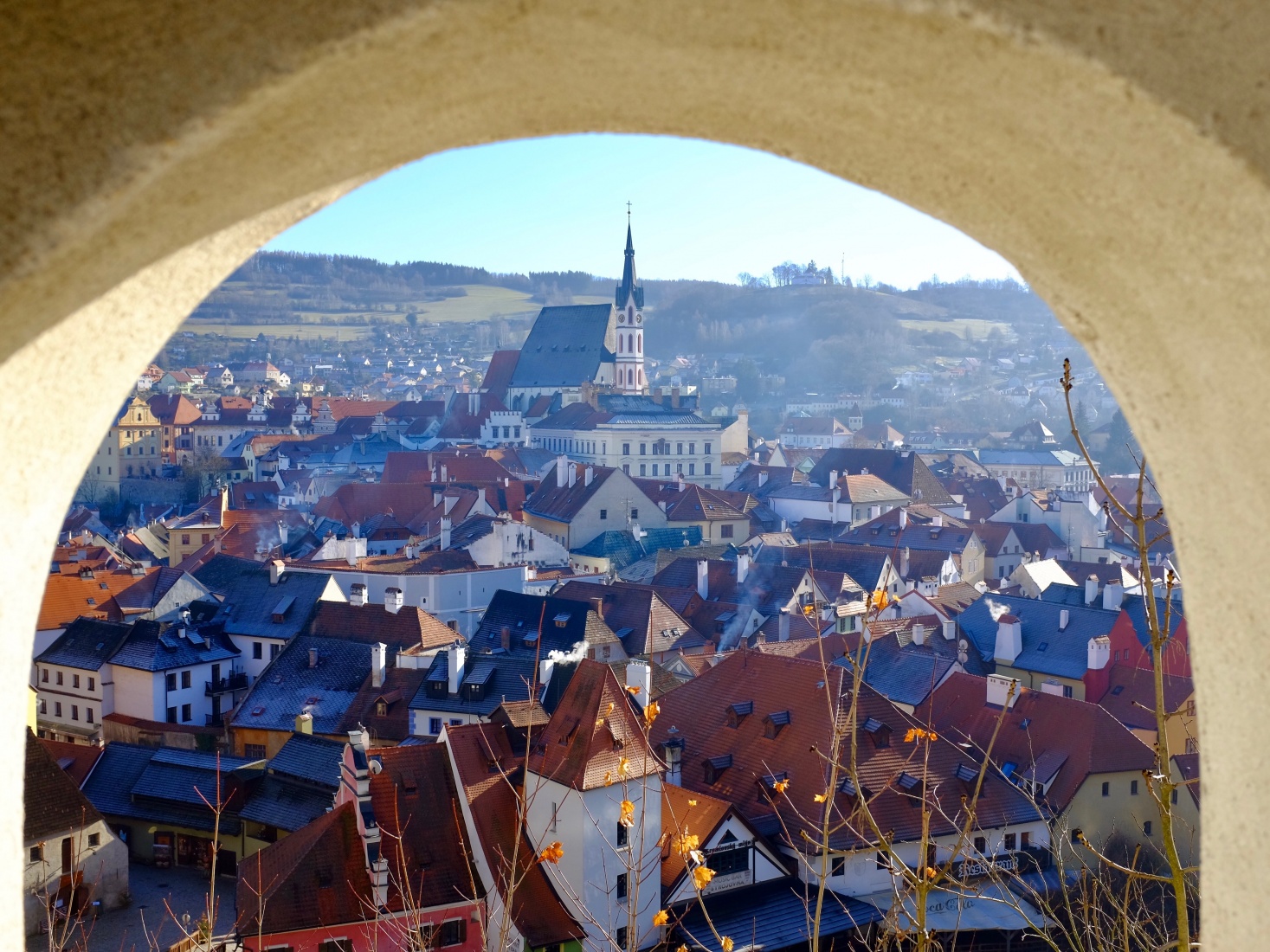 From Passau, the passengers had the choice of day excursions to either the Czech town of Český Krumlov or to Salzburg in Austria -- a tough decision. Thinking I might be a better expert in a country I actually live in, I opted for Český Krumlov. This photo is from the town castle overlooking the town's churches and roofs. Photo by Mark Baker. 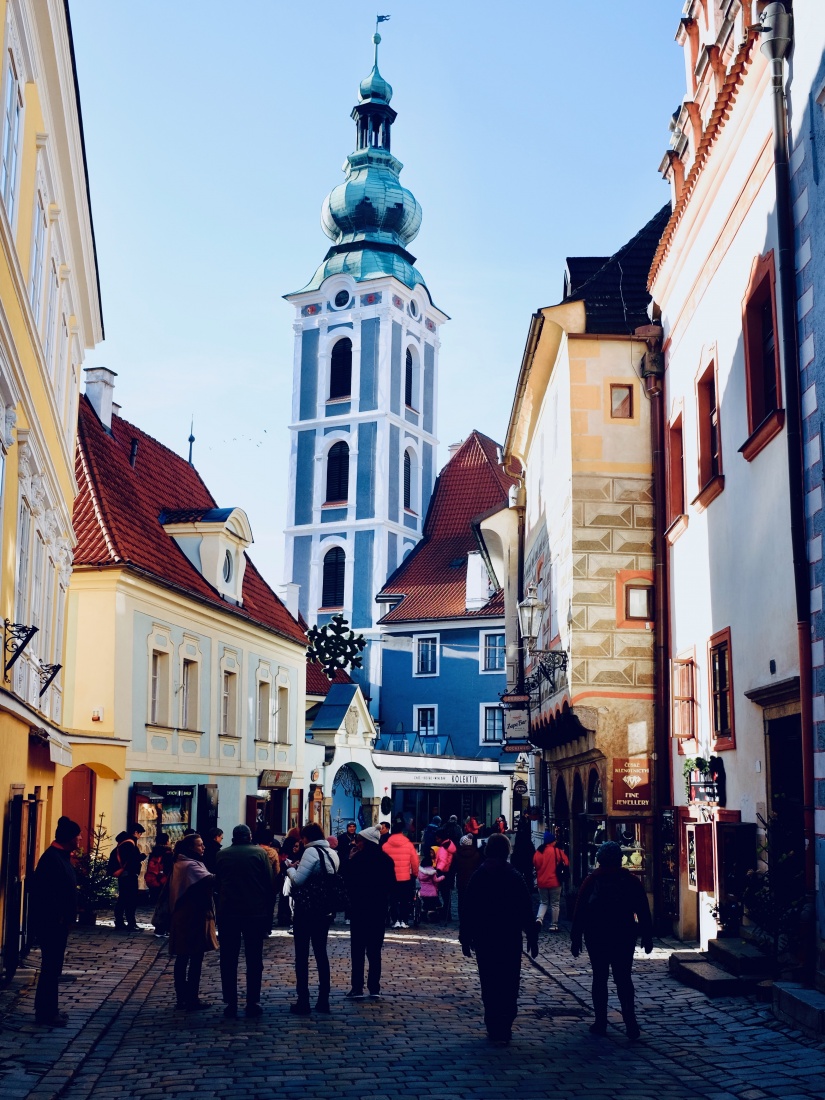 A street scene from Český Krumlov. For photographers this place is a little like Princess Di. It's impossible to take a bad photo. We managed to visit on a relatively uncrowded day, and even got a bit of sunshine. Photo by Mark Baker. 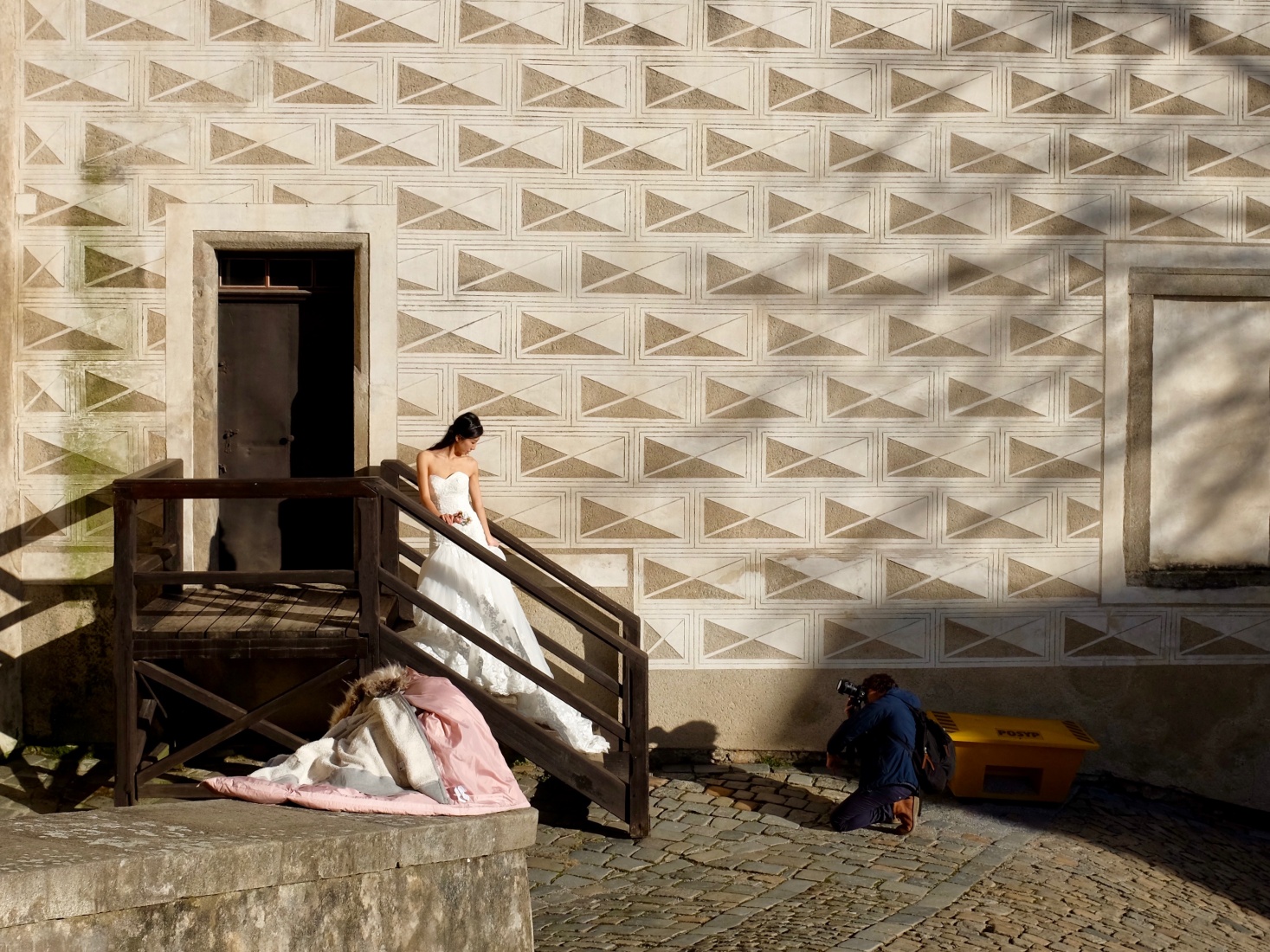 In recent years, a bizarre phenomenon has taken hold in both Prague and, apparently, Český Krumlov too. Brides from all over the world -- but mainly from Asia -- come here to have their wedding pictures taken. A great gig for wedding photographers. Photo by Mark Baker. 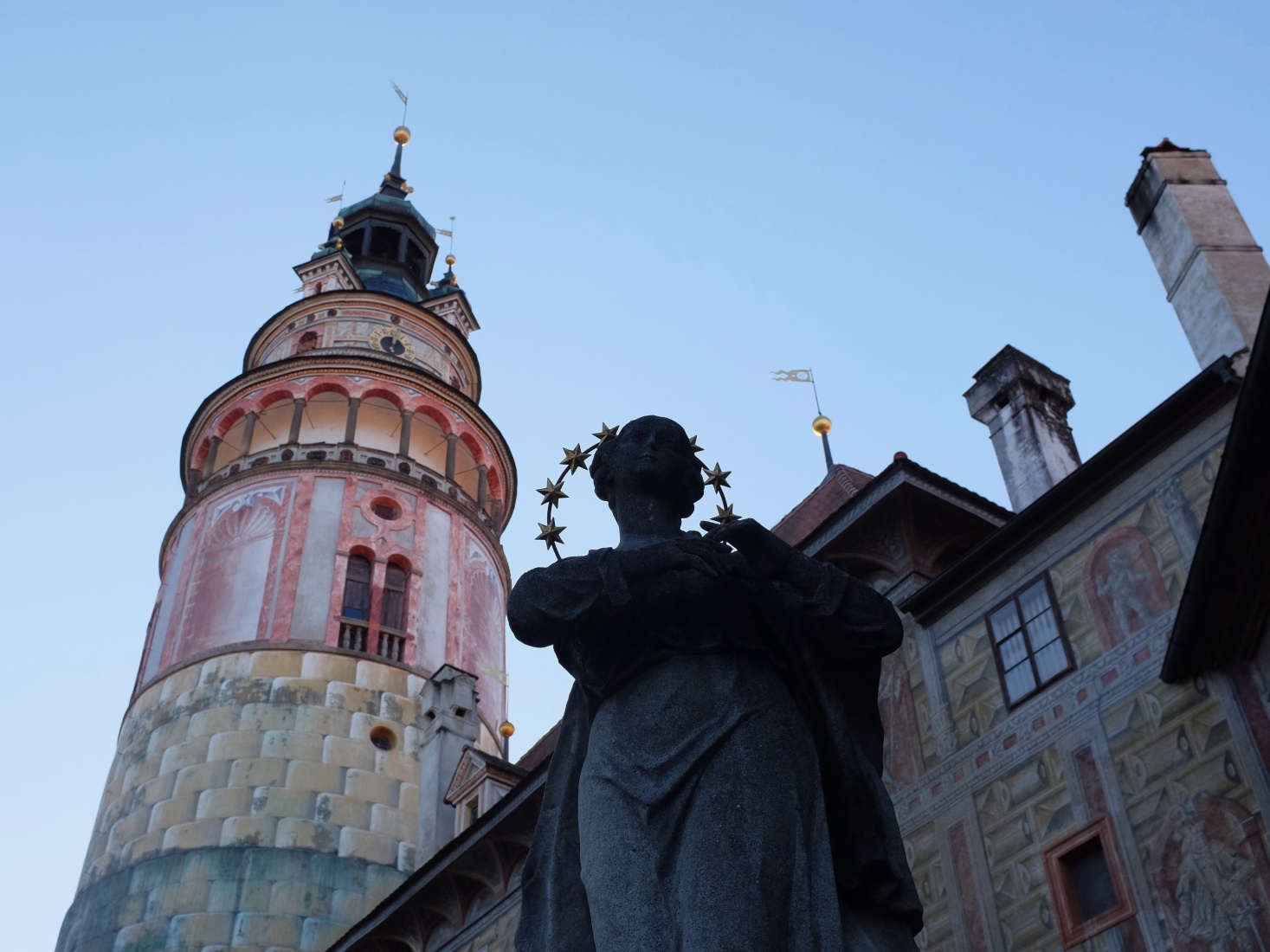 During this last cruise, I gave several presentations to the passengers, including one on European architecture. It's hard to find a good Renaissance building in Central Europe -- but Český Krumlov's tower is an obvious exception. Here it's posed next to a baroque statue. Photo by Mark Baker. 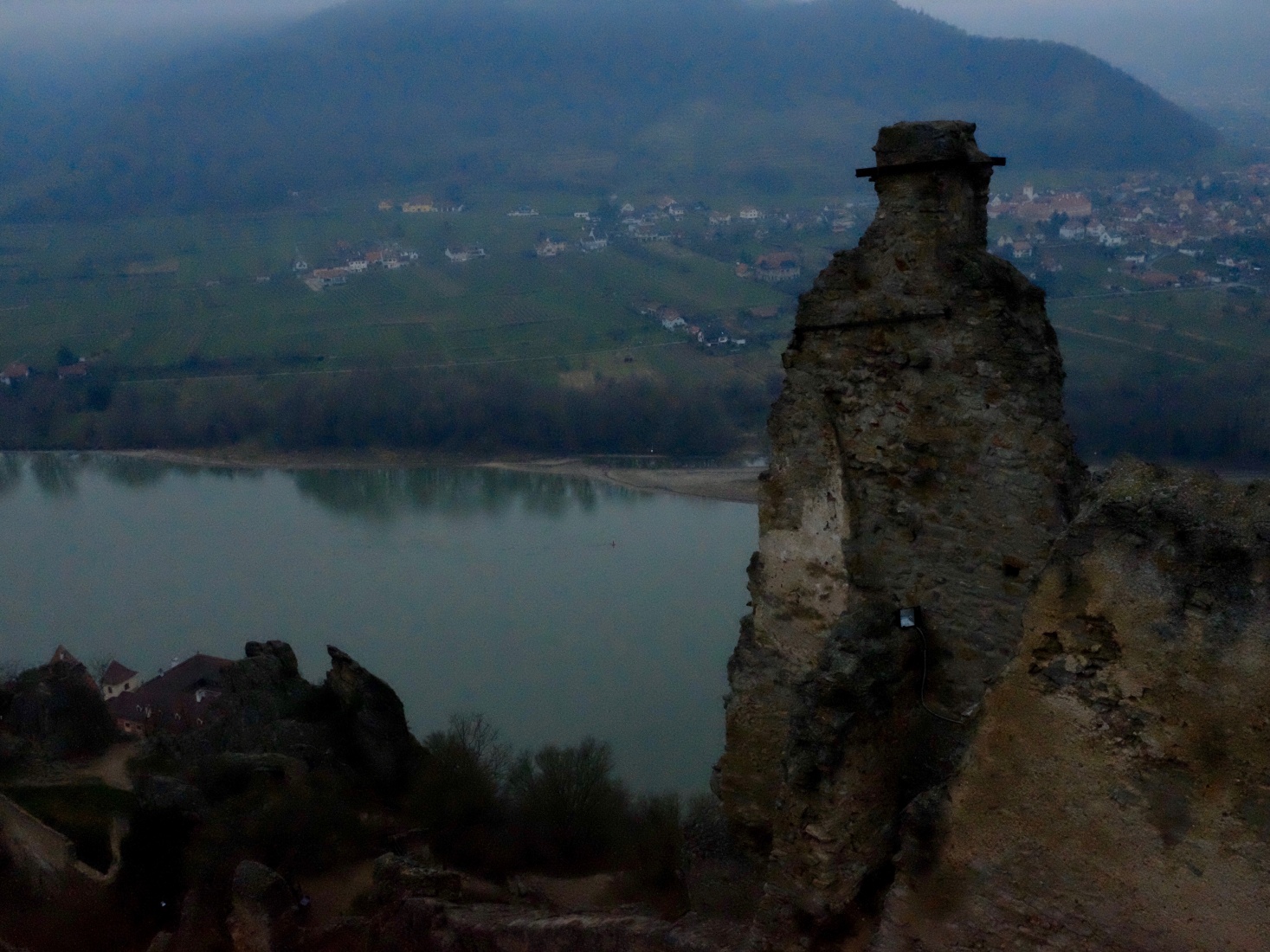 After Passau, and the side trips to Salzburg or Český Krumlov, we proceeded down the river to Austria's Wachau Valley. This photo was taken in the tiny town of Dürnstein, after a hike up to the town's ruined castle. Photo by Mark Baker. 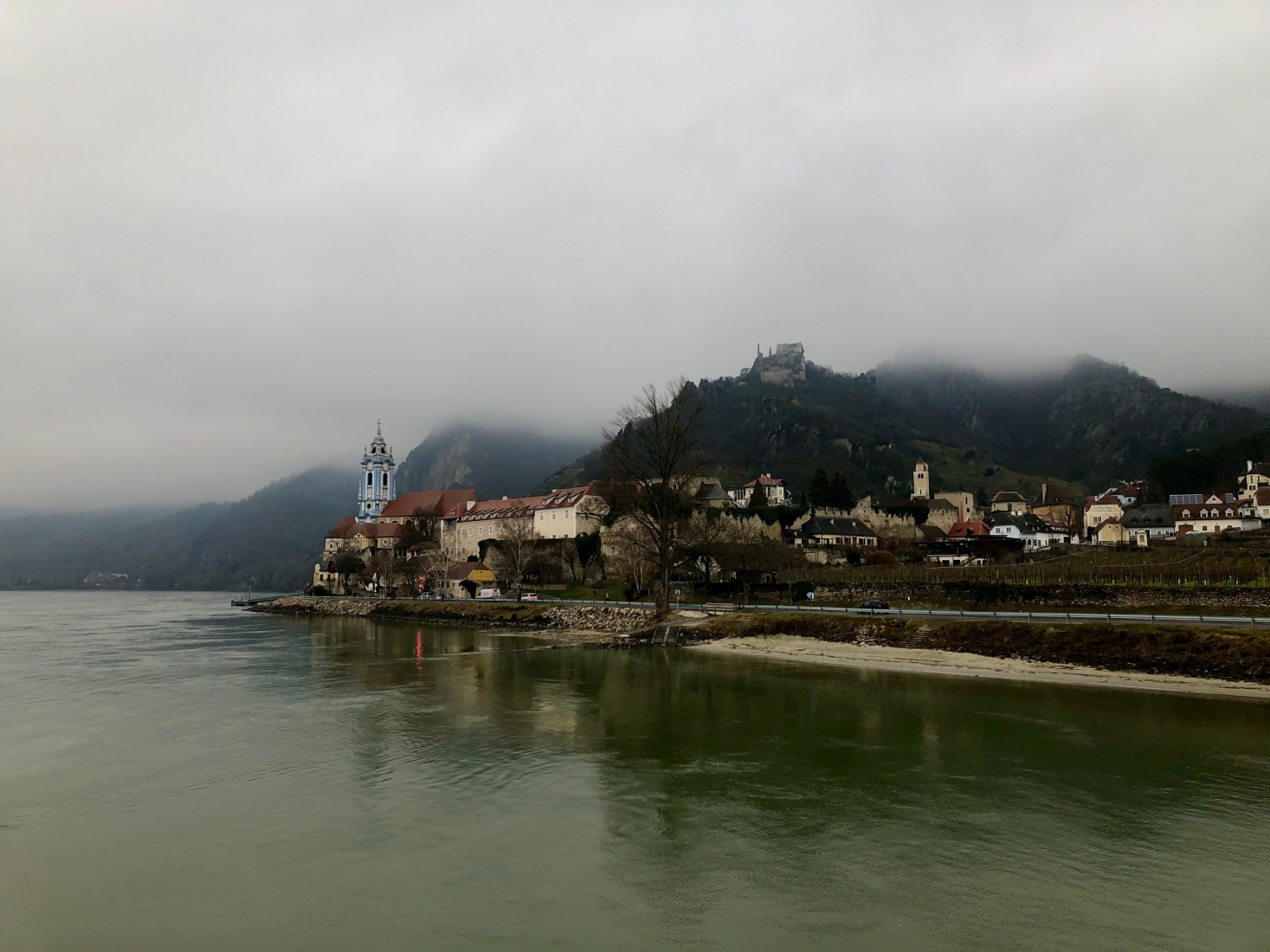 A shot of a foggy Dürnstein as we rounded the river bend and prepared to dock. The castle ruin is the stuff of legend -- Richard the Lion-Hearted was captured in modern-day Austria while returning from the crusades and possibly spent time in this castle as a prisoner (though historians have done their best to debunk this story). Photo by Mark Baker. 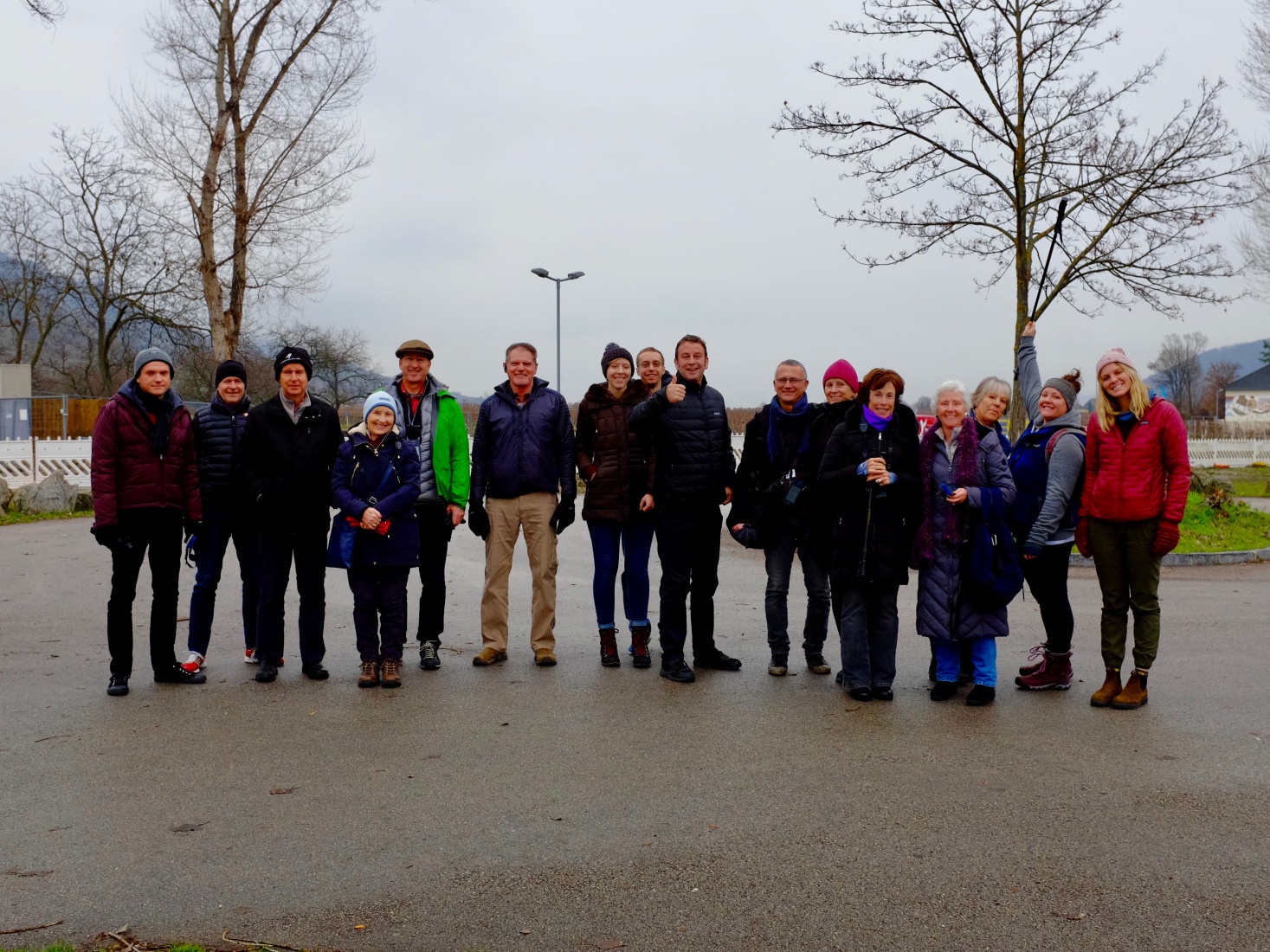 One of our excursions in town was to hike the steep 30 minutes up to Dürnstein Castle. This was part of our hiking group from the cruise. Our cruise director, Richard, is the one in the middle giving the "thumb's up" -- though I don't remember him actually doing the hike :) Photo by Mark Baker. 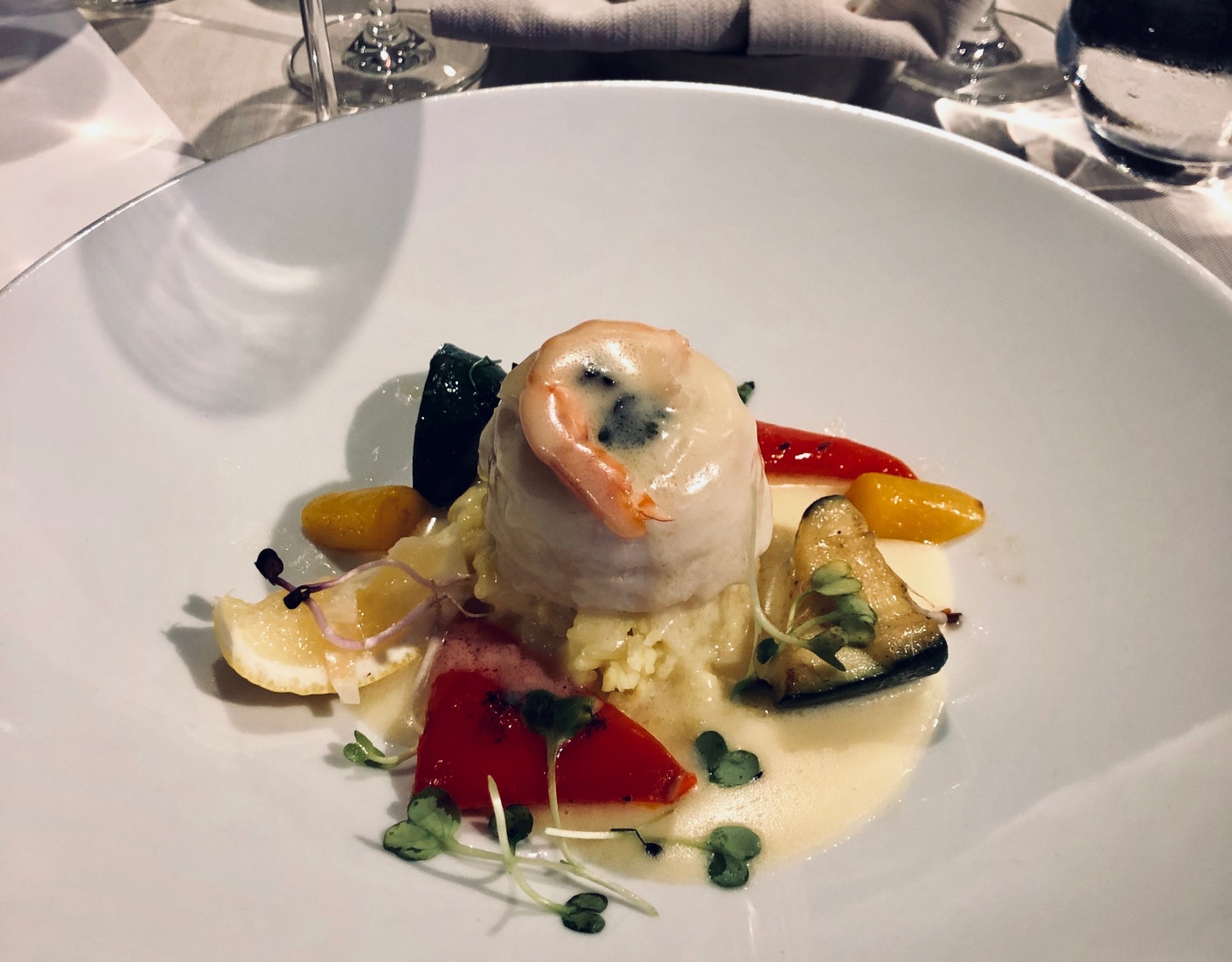 My favorite meal of the trip, by far, was this fish dish, prepared in a light cream and lemon sauce. River cruises are food overkill. Every night is something different and usually something pretty good. By the end of the trip, I found myself skipping meals just to survive the trip. Photo by Mark Baker. 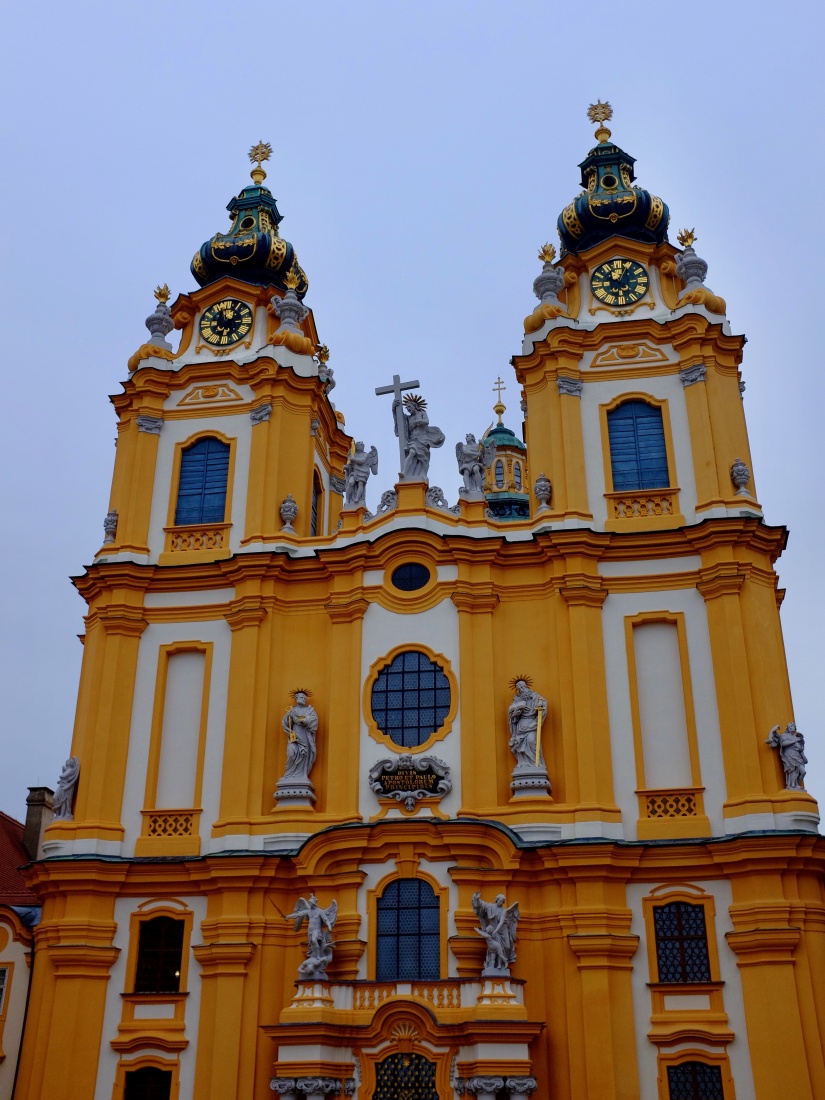 On this cruise, I tried to vary my own itinerary and to participate in excursions that I missed the first time around. This was a tour of Austria's astounding Melk Abbey. This is the front of the abbey cathedral, but the actual complex is bigger than you can possibly imagine. Photo by Mark Baker. 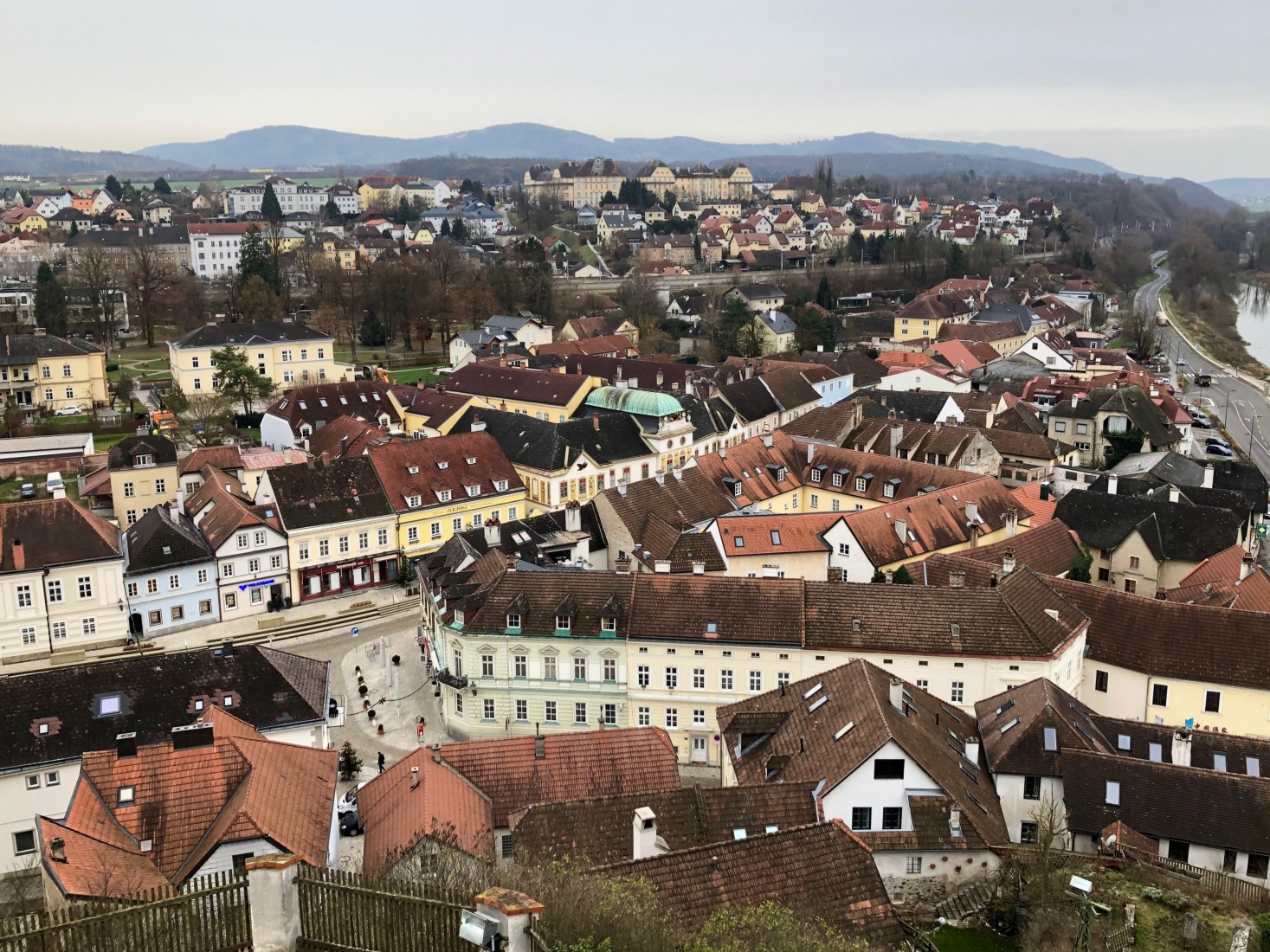 The Austrian town of Melk, viewed from atop the Melk Abbey hill. Photo by Mark Baker. 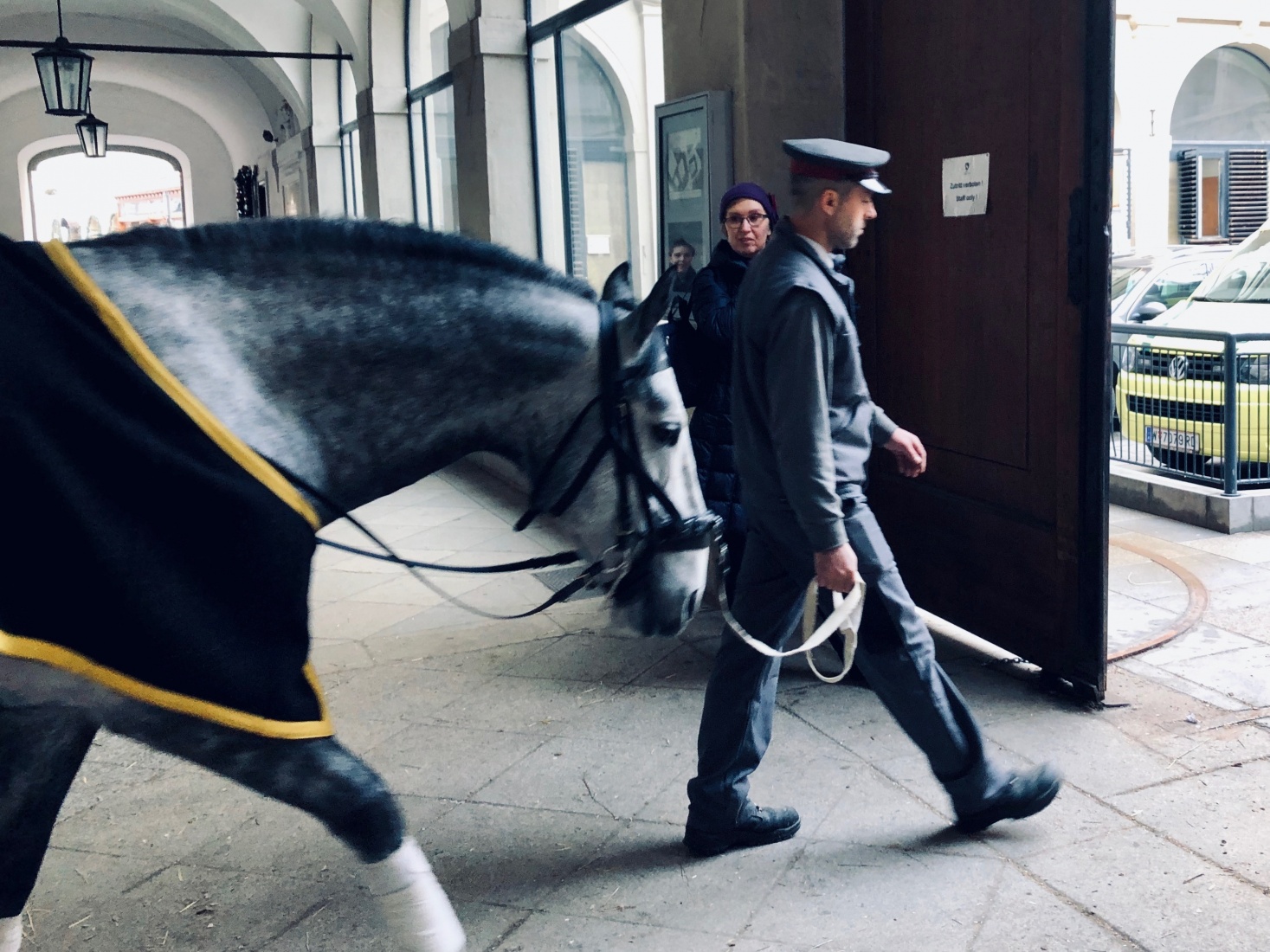 From Melk, we sailed further to Vienna. Once in Vienna, we popped over to the feeding area of the Spanish Riding School. Our timing turned out to be excellent as they were just bringing back the Lippizaner horses for lunch. Photo by Mark Baker. 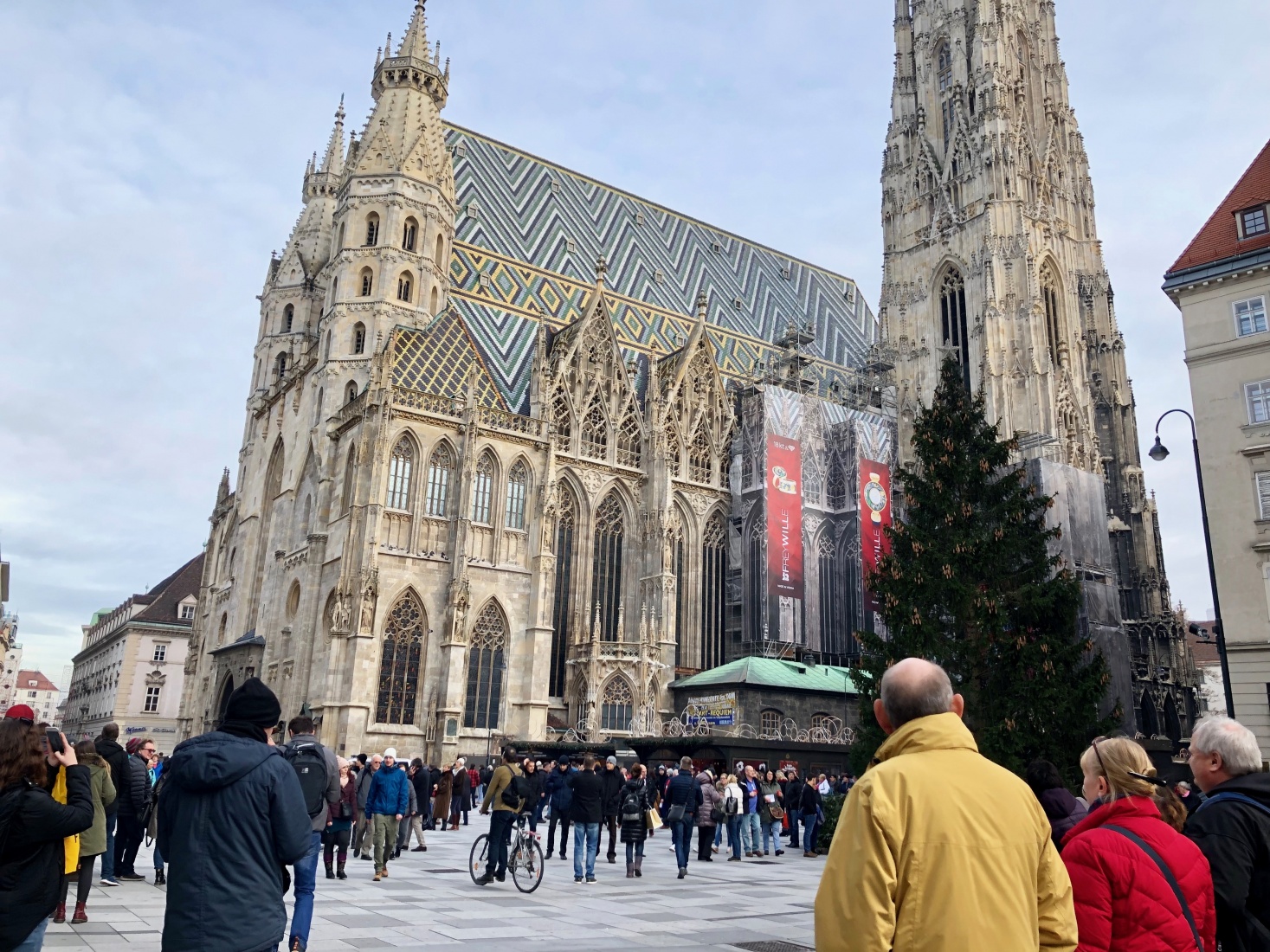 I don't travel to Vienna very often these days, but I've now been on the city's central Graben twice in the past two months. Pictured here is Vienna's most important church, St Stephan's Cathedral. Photo by Mark Baker. 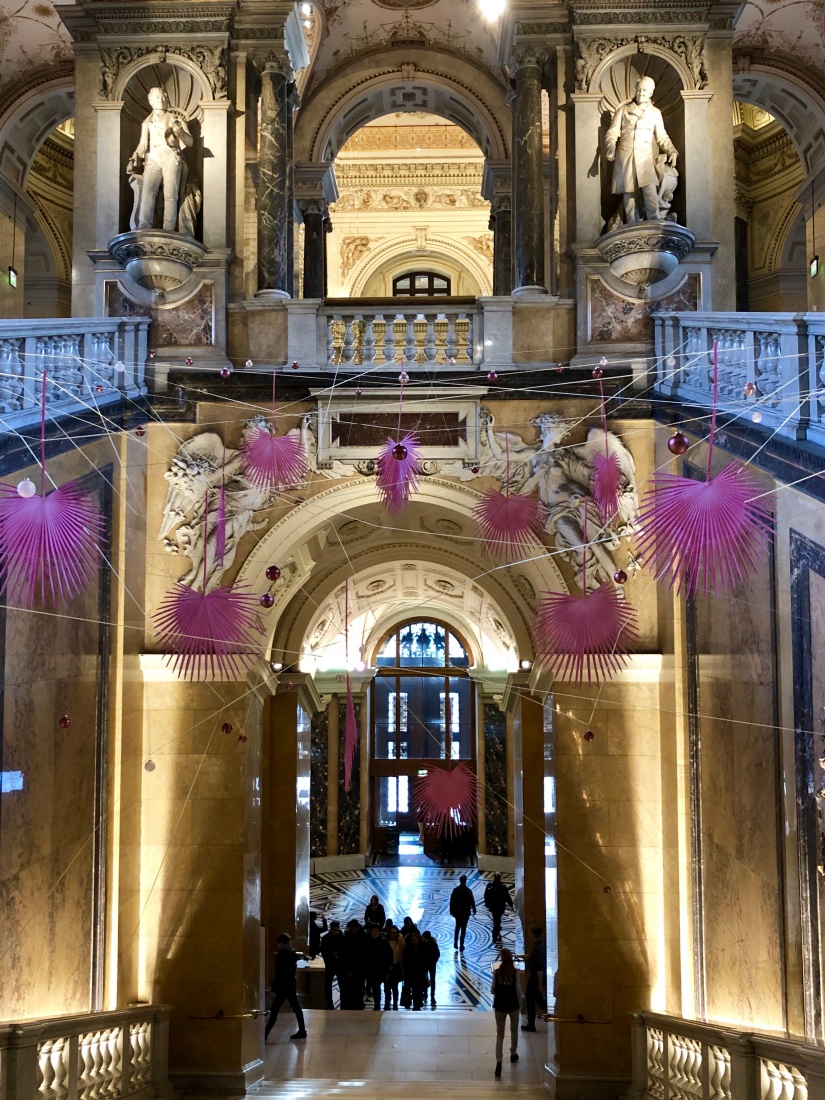 It had been years since I'd visited Vienna's Museum of Natural History. It seemed as if when I lived in Vienna, we spent much more time at the sister museum, the Art History Museum. This is the entryway to the museum, all done up for Christmas. Photo by Mark Baker. 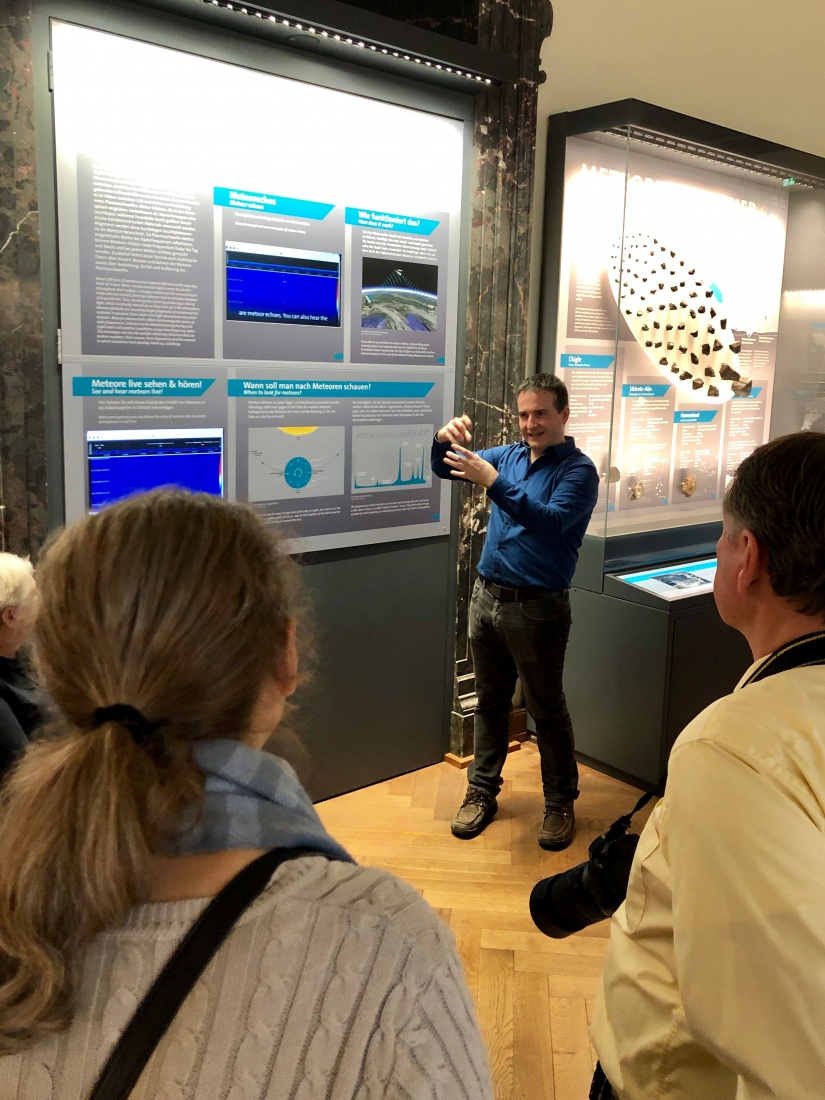 My nomination for the most interesting excursion on the cruise was a morning spent in Vienna's Natural History Museum. Here, the museum's curator for meteorites shows us debris that's fallen to the earth from Mars. Photo by Mark Baker. 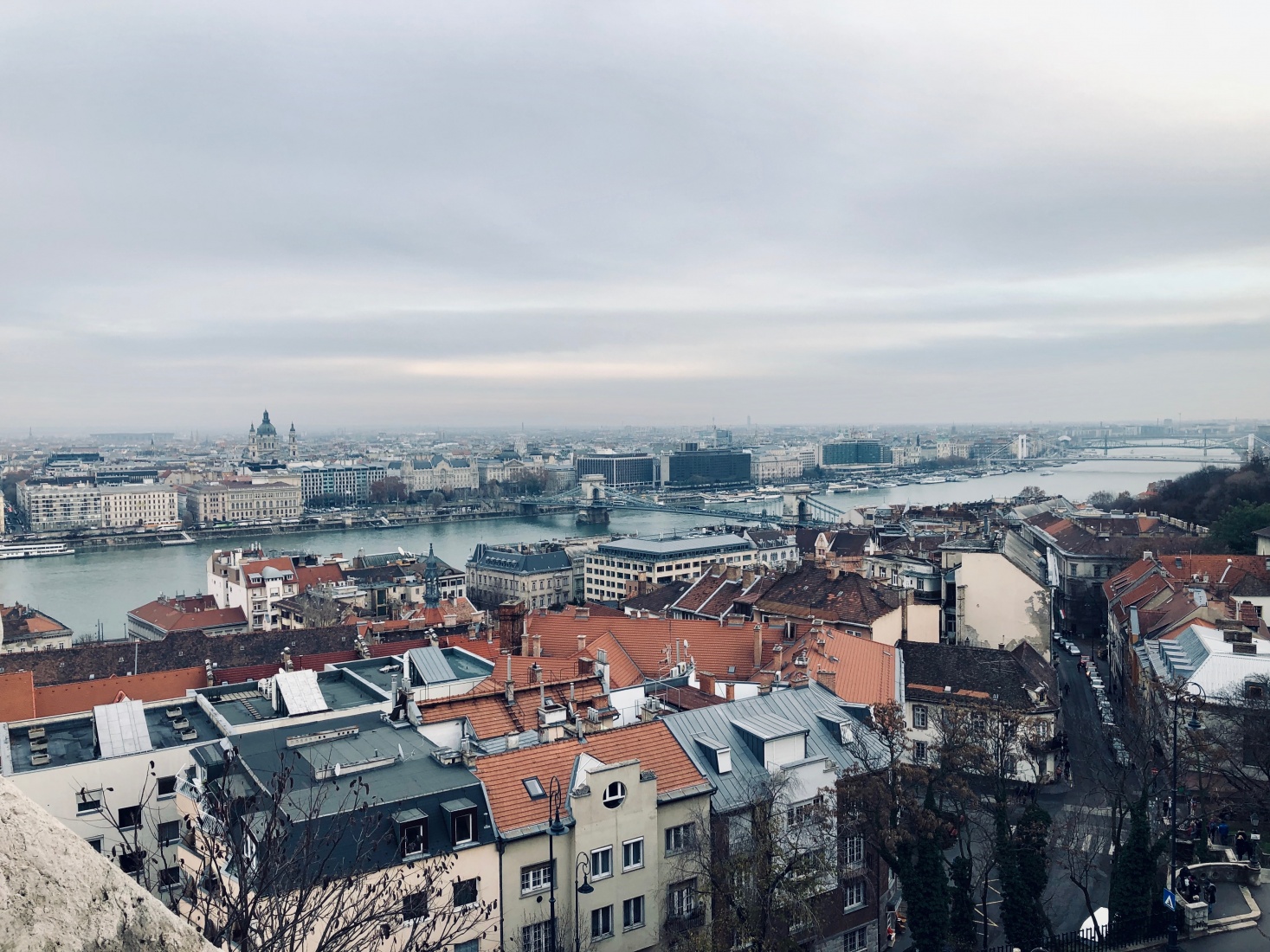 From Vienna, we made the long overnight sail all the way to Budapest. This is a view of the Pest side of the city from atop Castle Hill in Buda. We took a bus tour to get up here. On the plus side, at least we didn't have to climb the hill. Photo by Mark Baker. 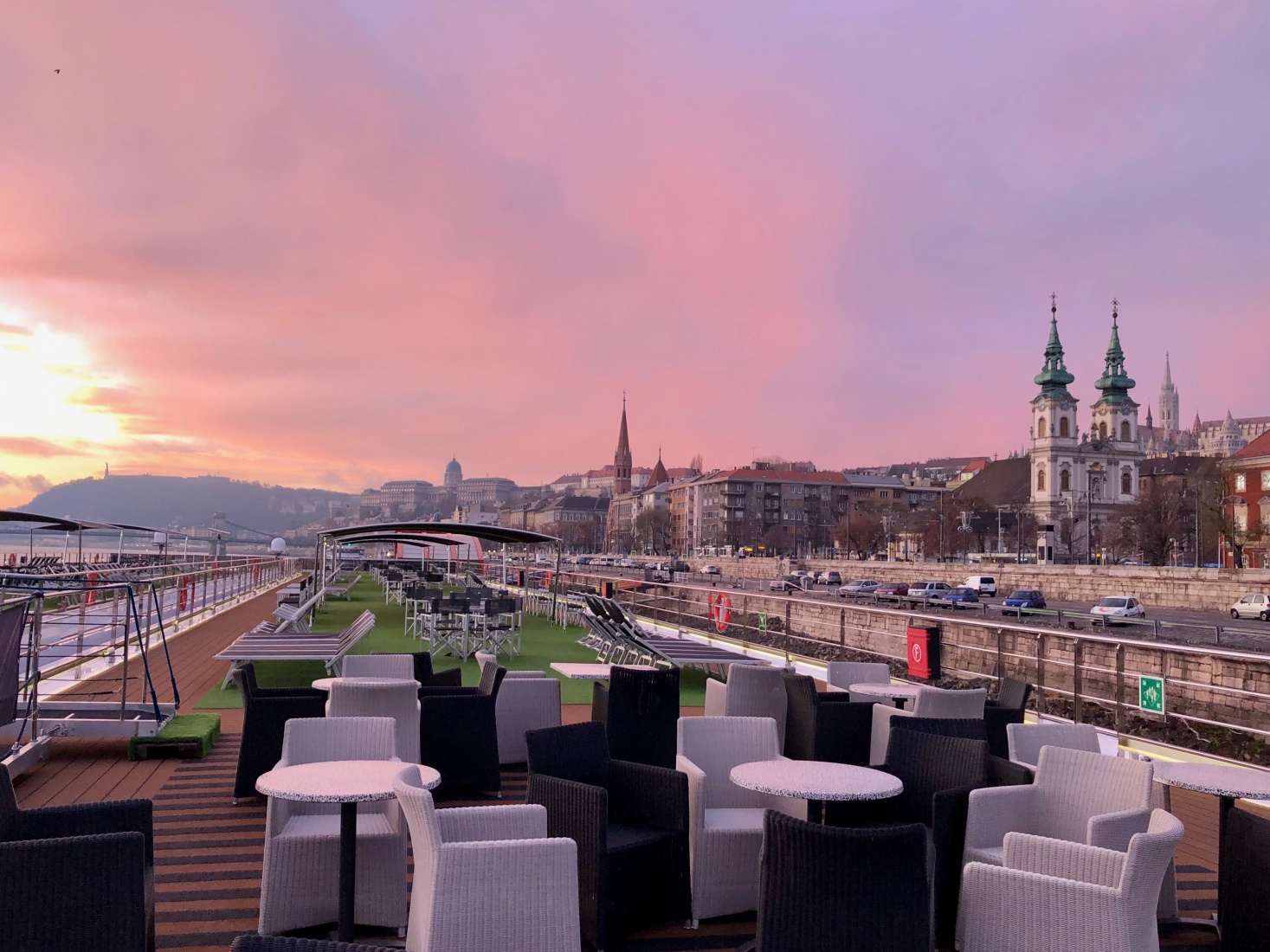 Just like in Amsterdam on the previous cruise, our last morning in Budapest brought an incredible sunrise and a sheen of yellow-pink light. Hashtag #nofilter ... I'm not sure how the folks at Scenic and National Geographic managed to pull it off, but it was the best light of the trip. Photo by Mark Baker. 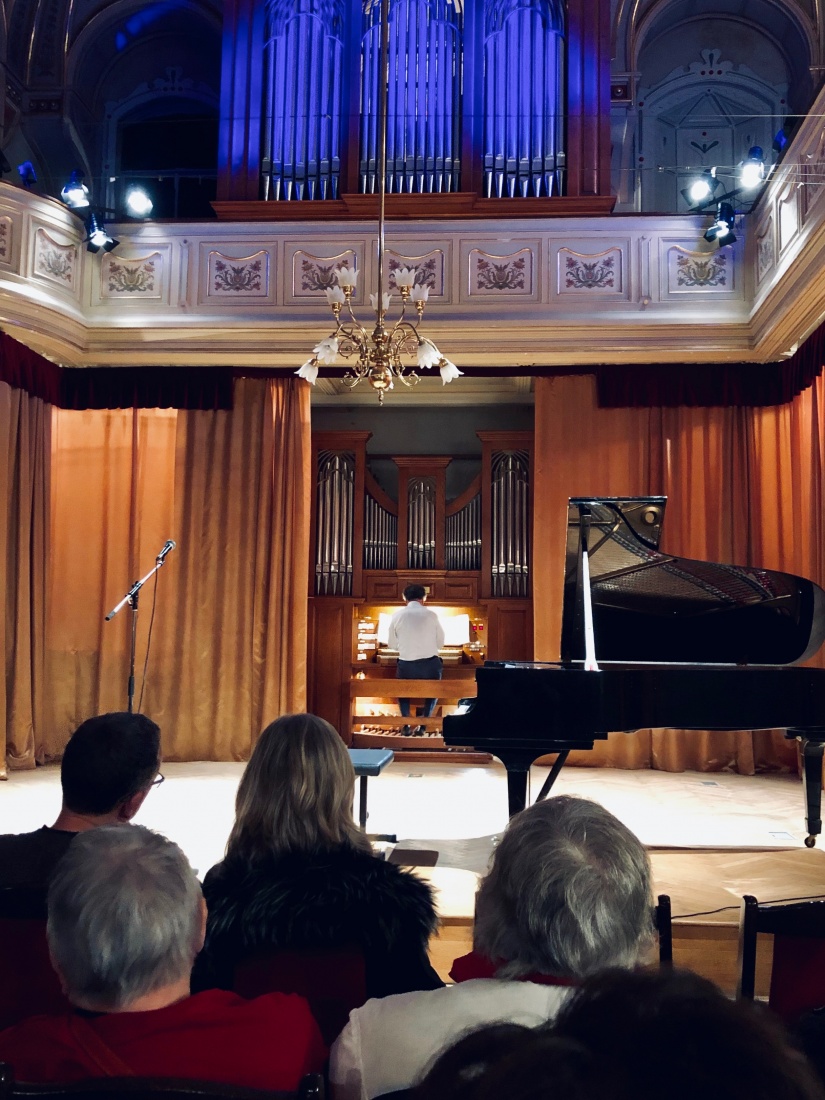 For many cruise guests, the highlight of the trip was this one-man organ and piano concert held at Budapest's Institute for the Blind. The pieces included a demanding and occasionally violent 10-minute piano piece by Hungarian composer Franz Liszt. It was mesmerizing. Photo by Mark Baker. 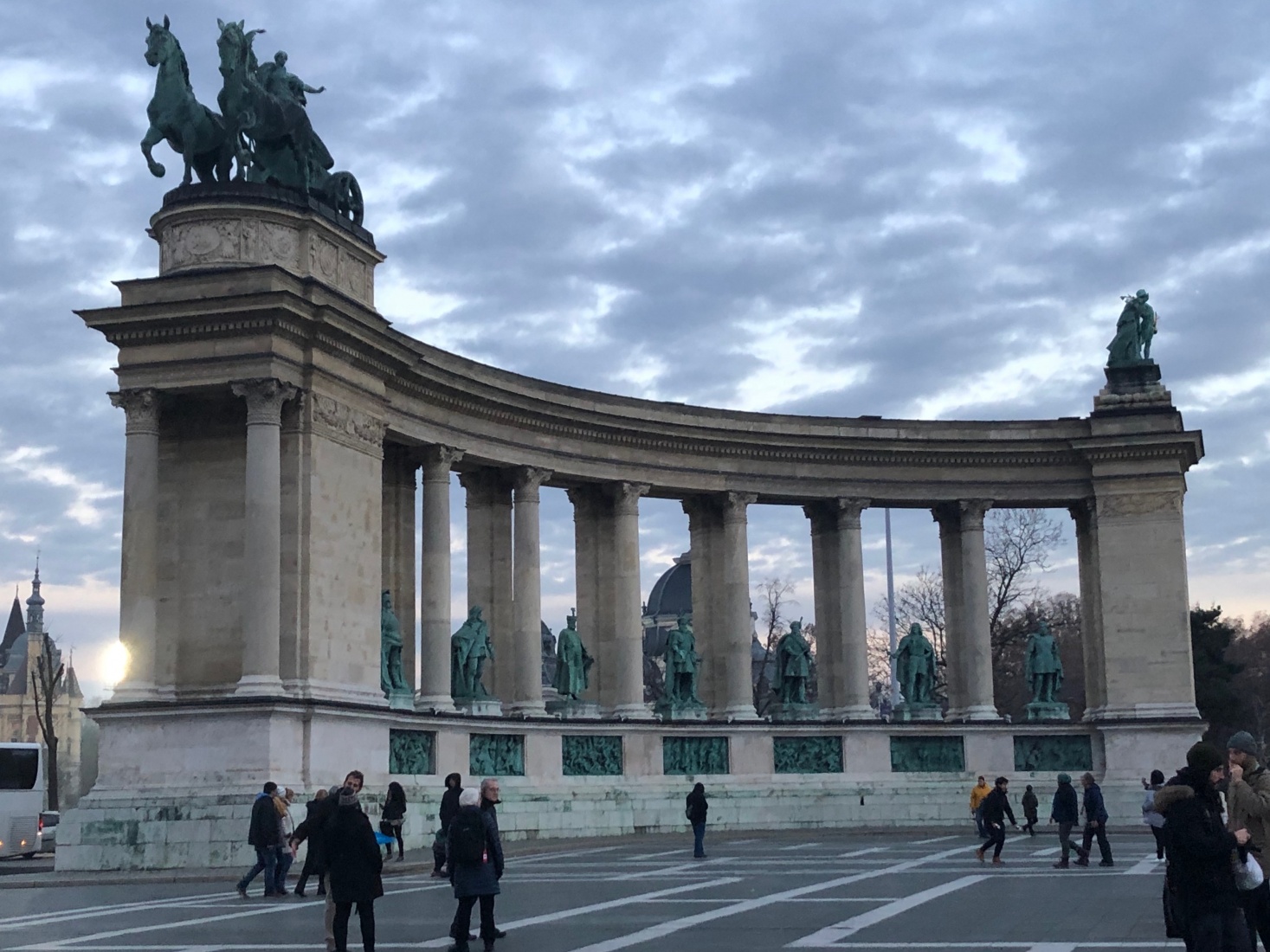 A few minutes wandering around Budapest's Heroes' Square, near the City Park on the Pest side of the river. I had never paid much attention to the statues here (of the Hungarian heroes over the ages) but they're fascinating. Photo by Mark Baker. 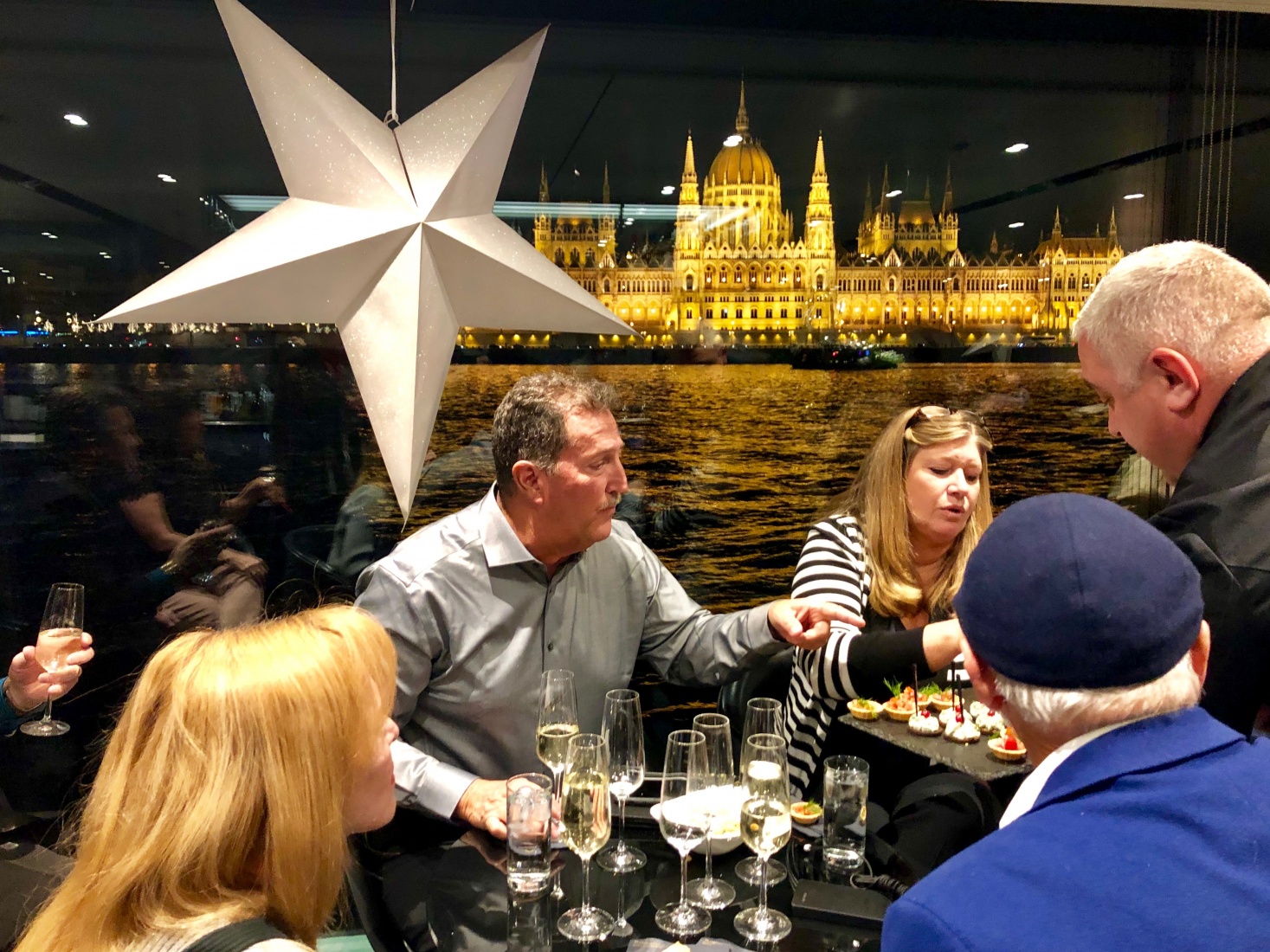 This was the view from our boat's lounge on the last evening of the cruise, in Budapest. The Hungarian Parliament building is clearly visible through the window. A great backdrop for an impromptu party. Photo by Mark Baker. 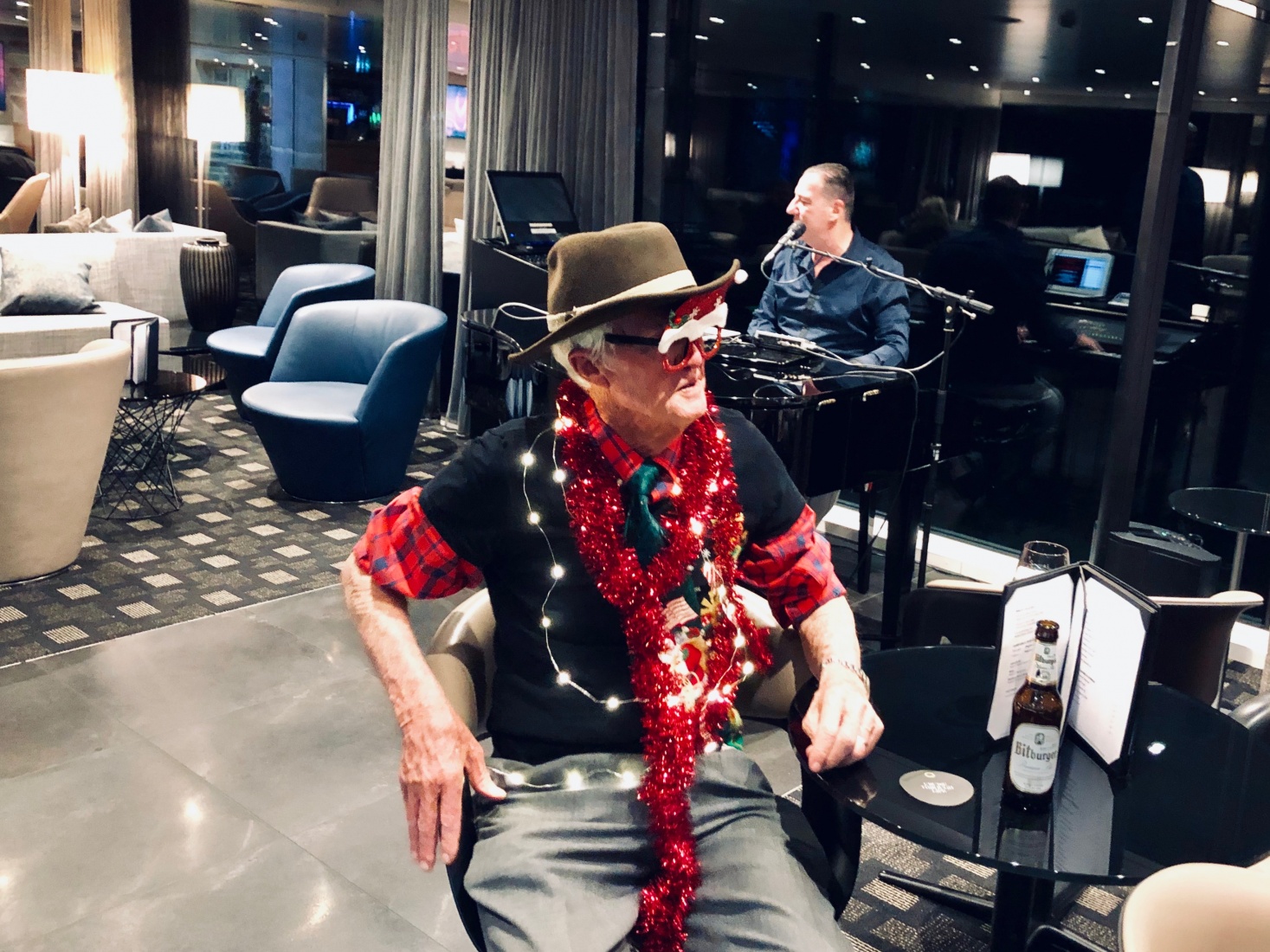 We had a big group of Texans on our cruise. On one of the evenings, they held their own "ugly-sweater" Christmas party on board. Photo by Mark Baker. 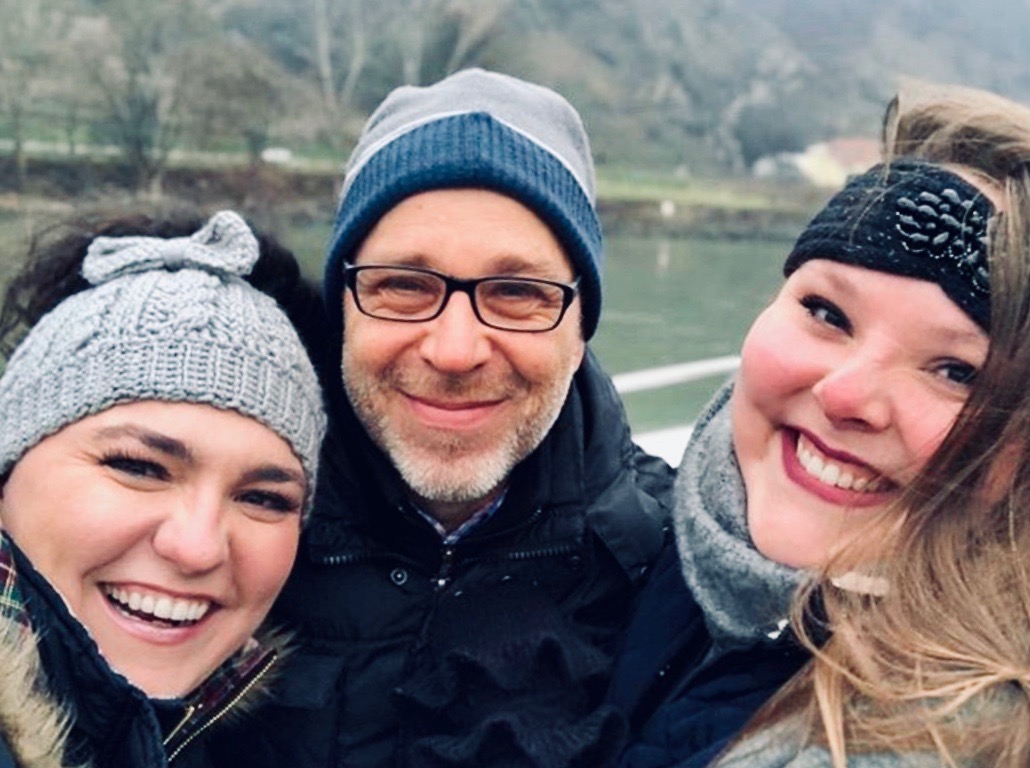 This is Ali (left) and Lauren (right) - two women from Texas who not only reduced the average age of the cruise by at least half but who were really determined to have fun. I think Ali took this selfie from her phone. 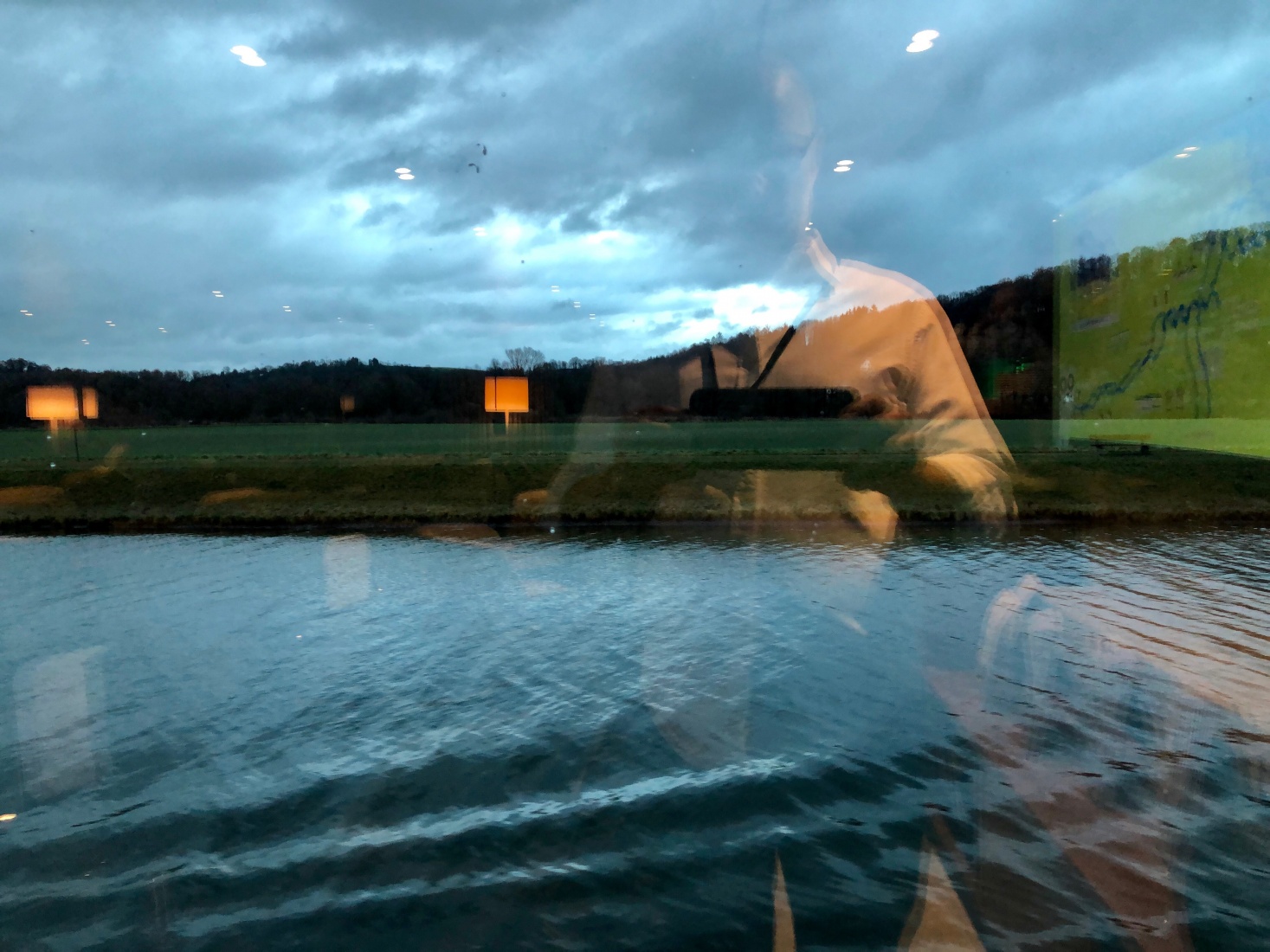 Part of the fun of a cruise is simpy waking up, getting some coffee, and watching the riverbank pass by through the window. This photo was relatively early in the cruise, sailing down the Main-Danube canal somewhere between Nuremberg and Regensburg. Photo by Mark Baker.