This week’s blog post was going to be about Russia anyway, but when I saw that the U.S. State Department had issued a (somewhat misleading) travel advisory on Russia, I knew the time had come. I had the fortune of traveling extensively in Russia in 2017 researching country content for Lonely Planet, and not only did the place appear to be safe, it was also a fascinating destination in its own right. As Russia prepares to host the FIFA World Cup 2018 football (soccer) tournament, I plan on rolling out several stories on the country (including on several cities hosting matches). Today’s post focuses on one of those host cities (and one of my favorite places in Russia): Volgograd.

Top Photo: The eternal flame of the Mamaev Kurgan complex remembers the many hundreds of thousands who fell during the epic Battle of Stalingrad during WWII. Photo by Mark Baker.
Posted in On The Road and tagged FIFA, football, history, Russia, Volgograd, war, World Cup, WWII.
Add a comment 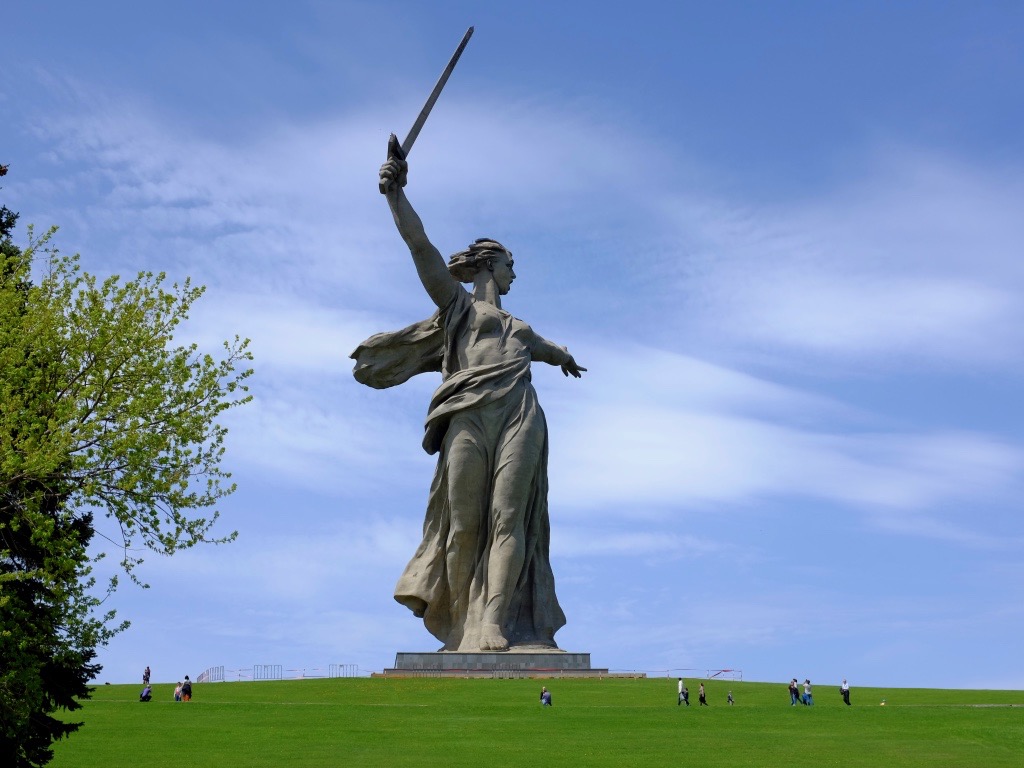 This image says it all. Gigantic ‘Mother Russia’ from atop the Mamaev Kurgan memorial complex. Note the size of the people on the ground. Photo by Mark Baker. 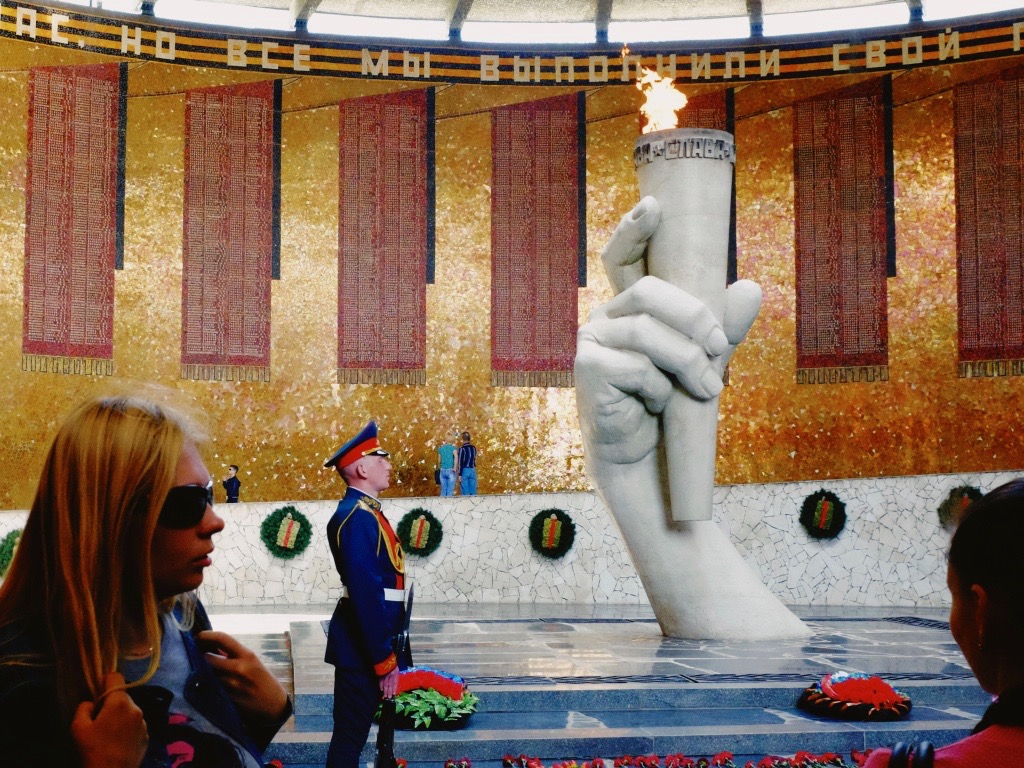 As you might expect, the changing of the guard at the eternal flame of the Mamaev Kurgan complex is a rather somber affair. Photo by Mark Baker/Lonely Planet. 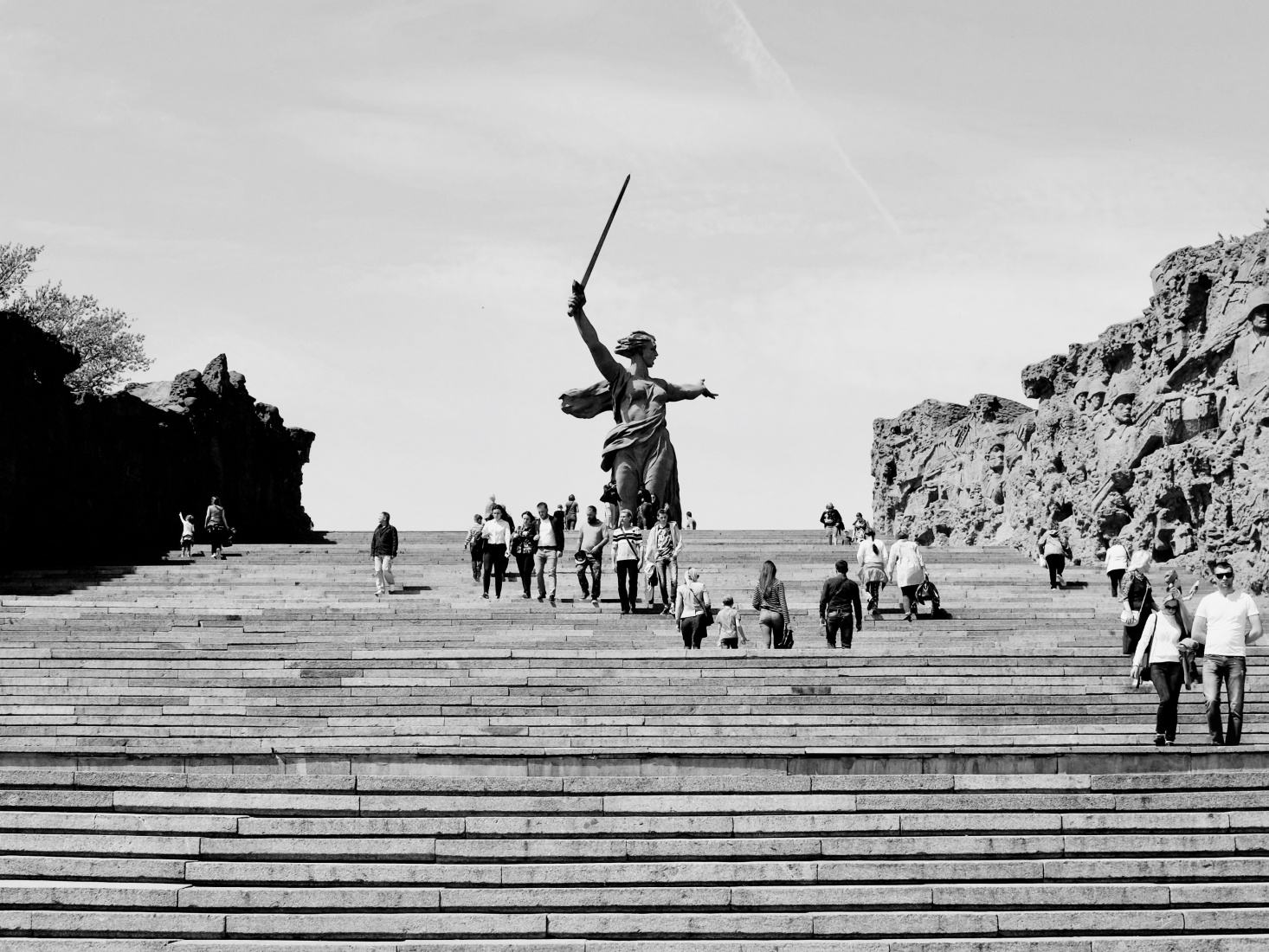 Wherever you are in Volgograd, it seems you're never far from the image of 'Mother Russia' and the Mamaev Kurgan complex. Photo by Mark Baker. 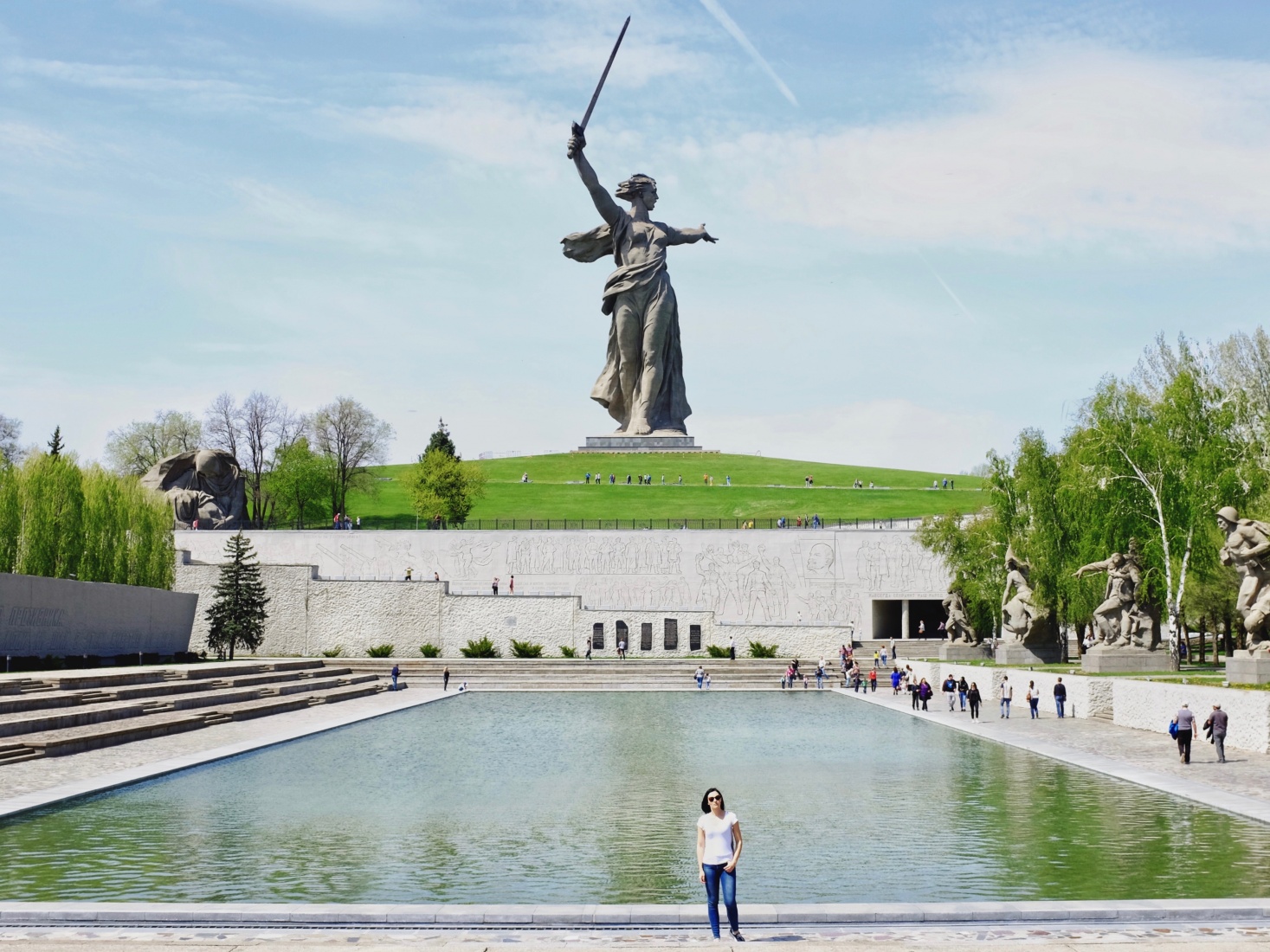 The Mamaev Kurgan complex features reflecting pools and expressive statues. The main pedestrian trail from the tram stop up the hill takes you past all of this. Photo by Mark Baker.

The Volga River metropolis of Volgograd is a city on war footing – that war being World War II, of course. Seemingly everywhere you’ll find a sign, symbol, statue or (jaw-droppingly immense) monument commemorating the Red Army victory over Nazi Germany at the Battle of Stalingrad (the city’s former name). But it’s an uncommonly handsome city as well. The grand buildings the Soviet authorities built up in the war’s aftermath exude a pleasingly retro, majestic charm. With some excellent hotels and restaurants, it’s the perfect stopover on a trip along the Volga.

For history buffs Volgograd is a must-visit, bucket-list type of place. It was here in late-1942 and early-1943 that the Soviet Red Army finally turned the tide on seemingly invincible Nazi Germany in the battle of Stalingrad. Well over a million people died in what historians regard as the bloodiest battle in human history. The dead included countless thousands of civilians as well Romanians, Hungarians, and Italians fighting alongside the Germans. Until this point in the war, the Germans had scarcely encountered defeat. After Stalingrad, they would begin their steady, inevitable retreat.

After the war, the communist government rebuilt the city from ground zero, showering it with impressive Soviet-style architecture, ornate plinths and pedestals, and a hilltop memorial complex, Mamaev Kurgan, that when finished in 1967 stood as the world’s tallest free-standing sculpture. 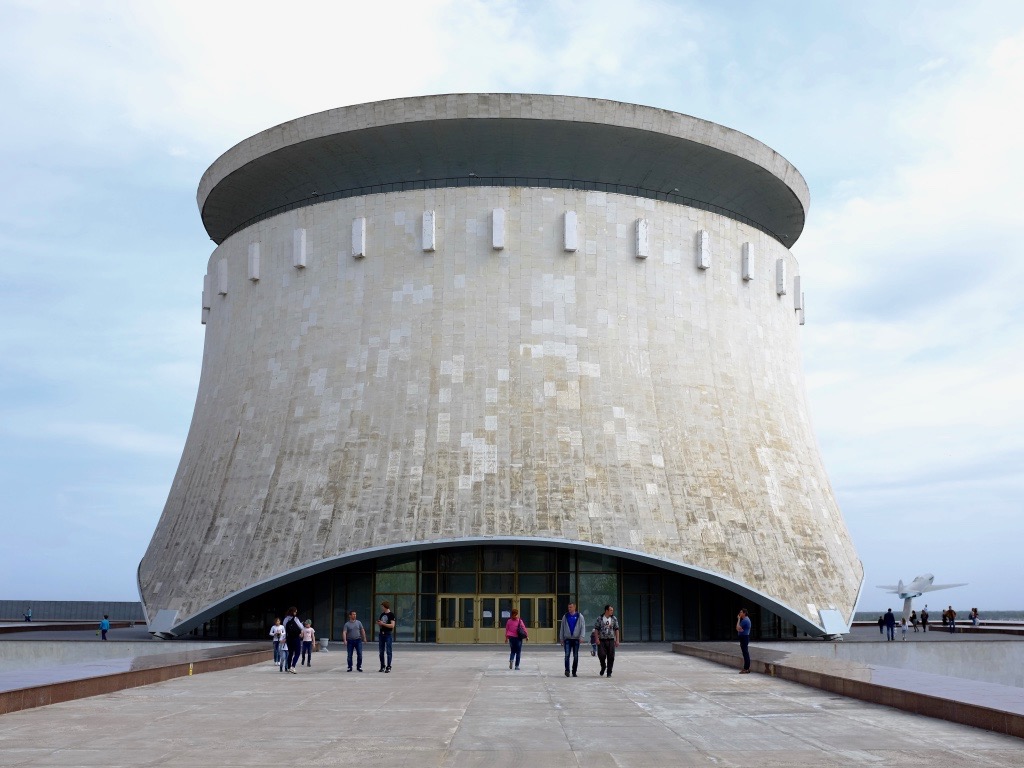 The Panorama Museum of the Battle of Stalingrad as viewed from the outside. This museum tells the story of the battle from every conceivable angle, but it's best to spring for the audioguide here. Photo by Mark Baker. 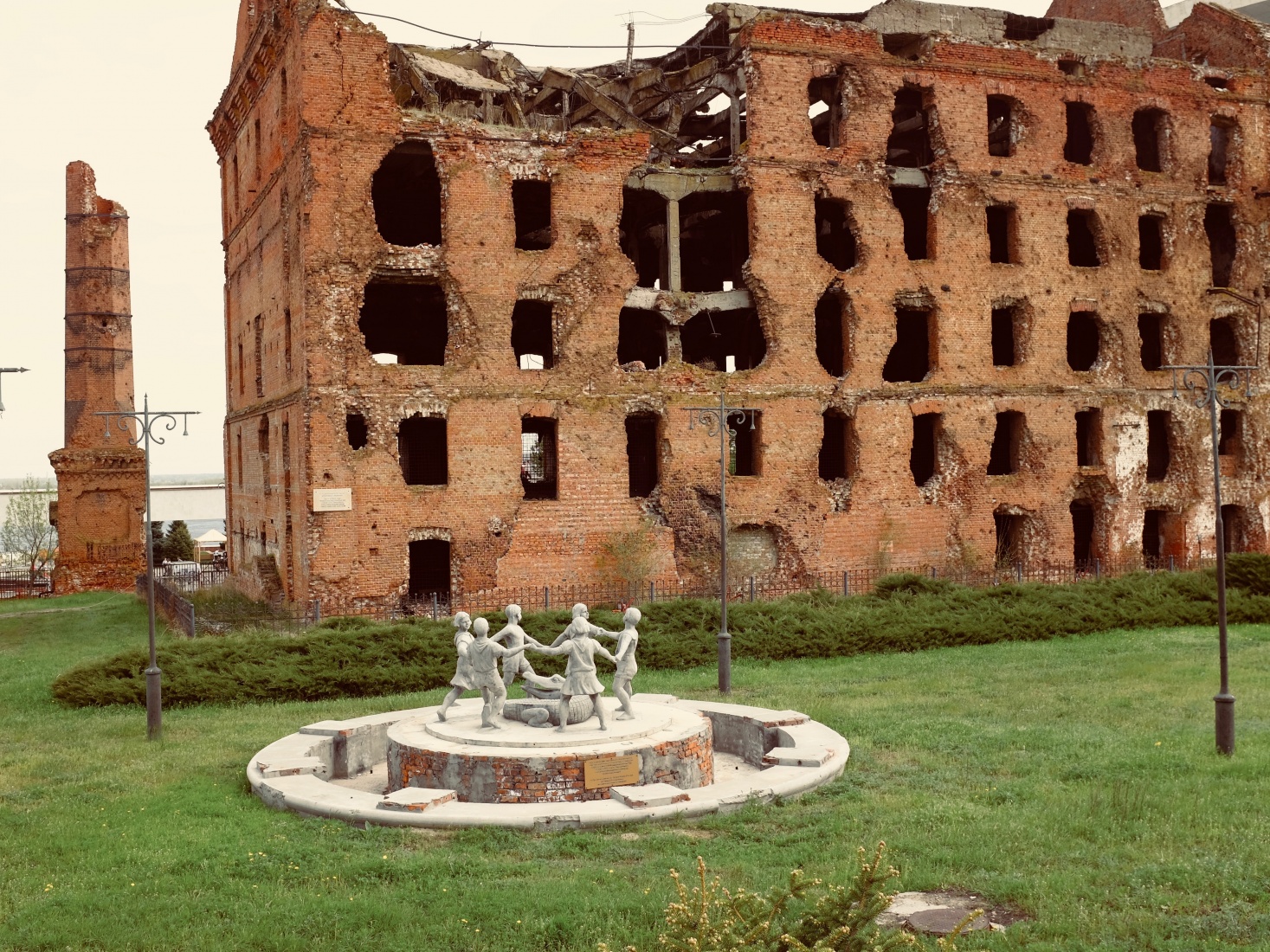 The Gergart Mill complex was destroyed in the fighting. It remains standing on the waterfront as a way of recalling the horrors of war. Photo by Mark Baker. 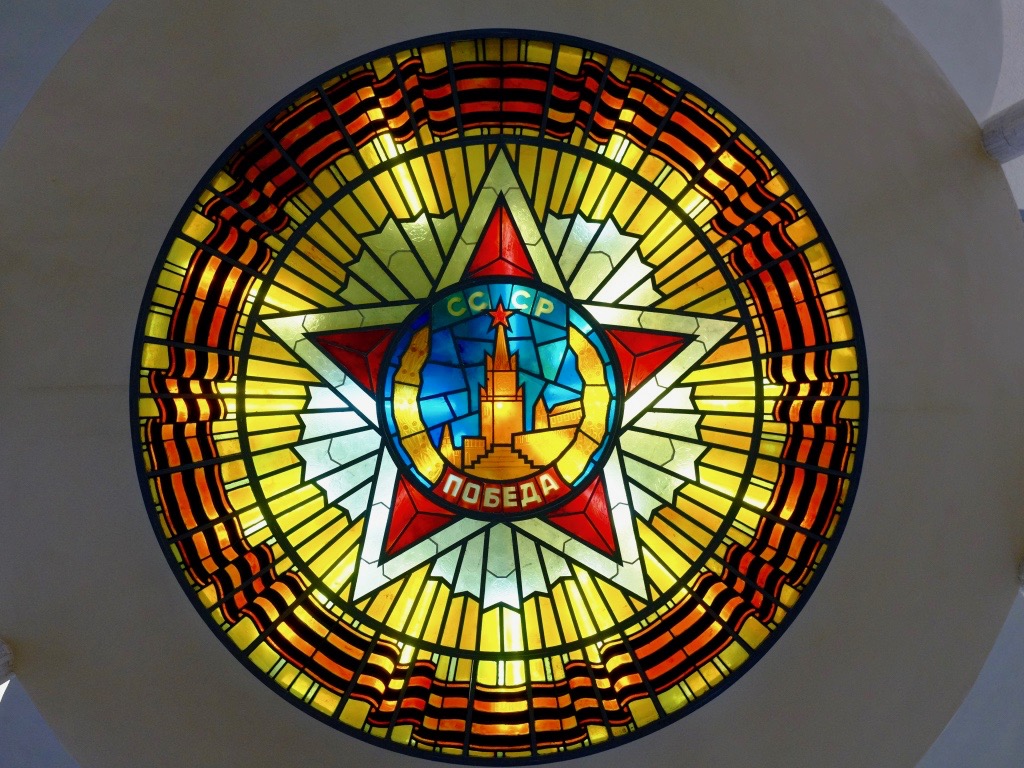 The stained-glass ceiling of the Panorama Museum of the Battle of Stalingrad. Photo by Mark Baker. 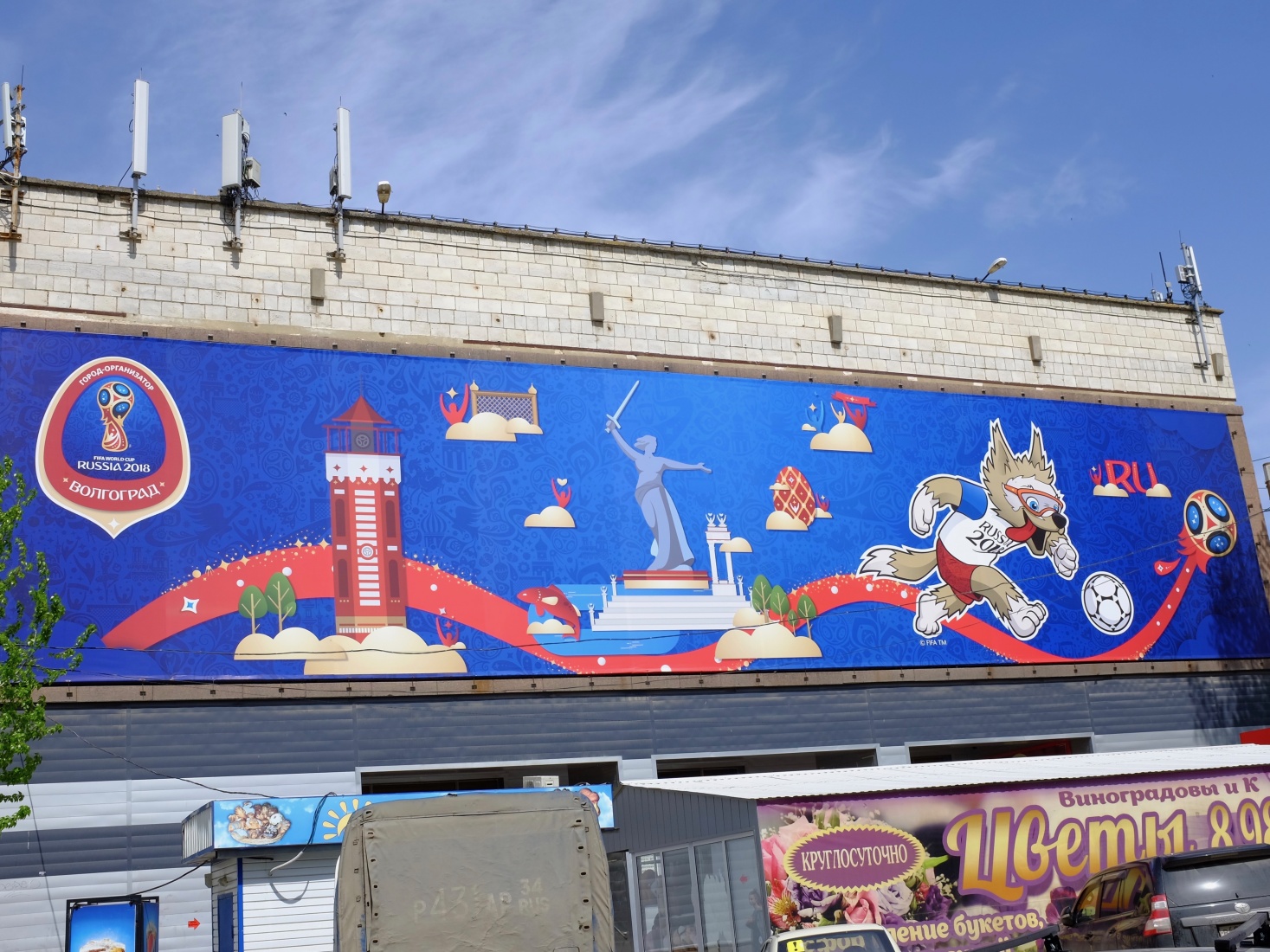 Signs around town celebrate the FIFA World Cup 2018 football tournament, at which Volgograd will (briefly) enjoy its moment in the sun. Photo by Mark Baker.

Any proper exploration of Volgograd must begin at the Mamaev Kurgan complex, 3.5km north of the city centre and accessible by high-speed tram. The complex’s centrepiece is an extraordinarily evocative 72m-high statue of Mother Russia wielding a sword that extends another 11m above her head. Visitors normally alight from the tram and approach the memorial from below, climbing a long series of stairways around reflective pools and statues, though it’s also possible to take a taxi to an upper parking lot behind the sculpture and walk down to the tram station.

The Mamaev Kurgan hilltop occupied a strategic vista over the city during the Battle of Stalingrad and was the site of some of the fiercest fighting between soldiers of the attacking German Sixth Army and the defending Russian 62nd Army. The statue and memorial complex took some eight years to complete. In addition to Mother Russia, there’s also a war cemetery, church and pantheon with an eternal flame and a don’t-miss changing-of-the-guard ceremony on the hour.

Back in the centre, the riveting Panorama Museum of the Battle of Stalingrad, on the riverfront, tells the story of the battle from every possible perspective in eight large display rooms. As there’s little signage in English, this is one museum to opt for the audio headphones. The museum’s highlight is a vivid, 360-degree battle panorama.

The Rossoshka Memorial Cemetery, 35km northwest of Volgograd near the village of Rossoshka, is another highly recommended war-related sight. This is a “reconciliation” cemetery, meaning that Russian, German, and Romanian soldiers are buried nearly side-by-side, with only a narrow road separating them. The names of thousands of fallen German soldiers are carved on big marble cubes scattered around the grounds, lending a sense of the scale of the losses. There’s no public transportation out here, but local travel outfits like Volgograd Sputnik Travel Co offer tours and day trips. 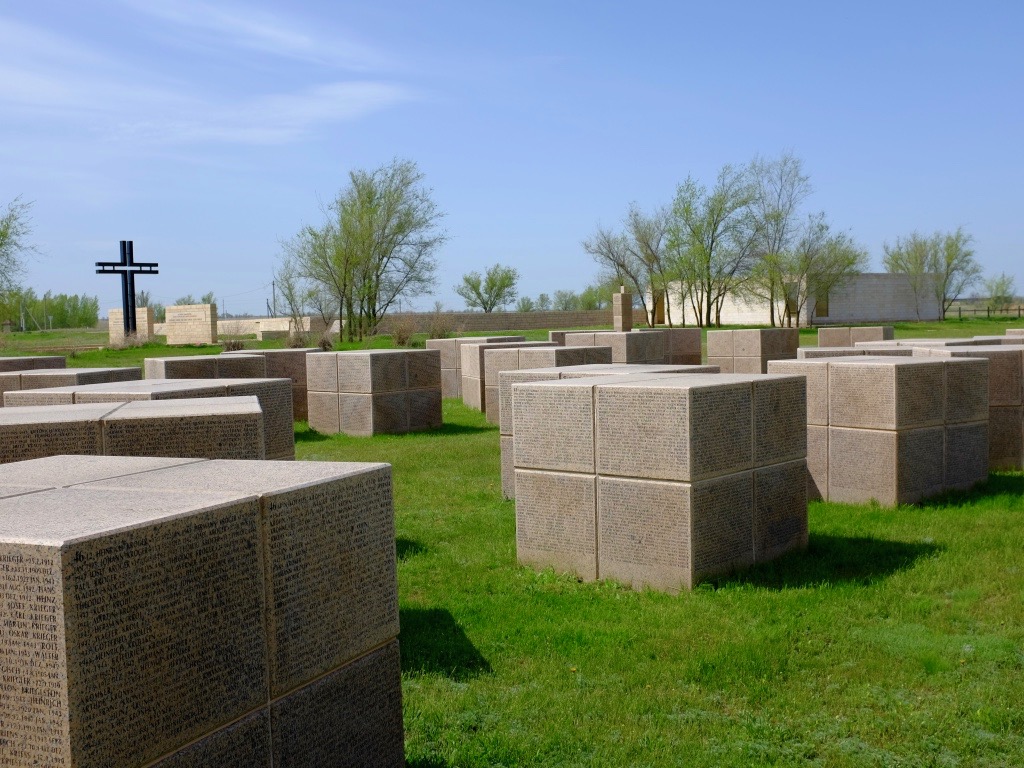 The names of German soldiers who fell in the battle of Stalingrad are inscribed on giant marble cubes at the Rossoshka Memorial Cemetery. Photo by Mark Baker. 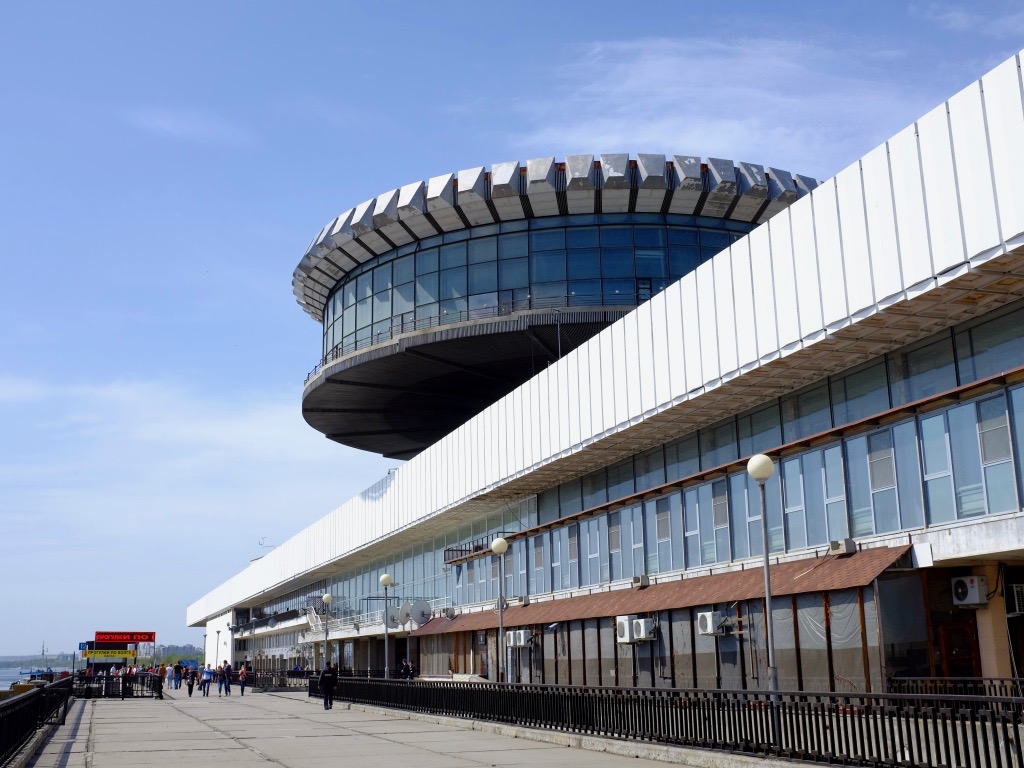 Volgograd’s Soviet-era, Brutalist river station is impressive but in need of repair. This is where you go to buy boat tickets. Photo by Mark Baker. 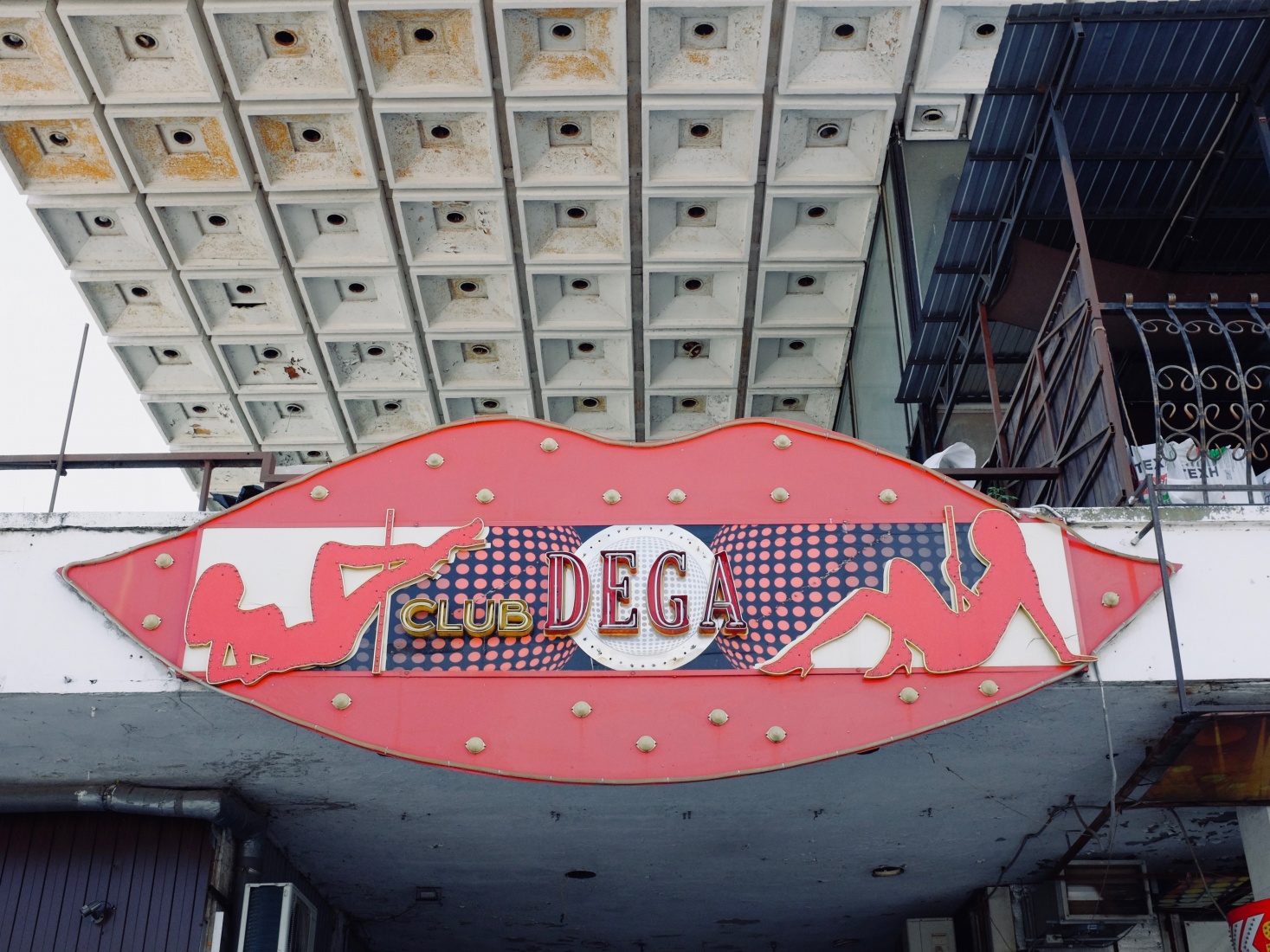 A few of the storefronts of Volgograd's sorry looking river station are occupied by racy-looking nightclubs. Photo by Mark Baker. 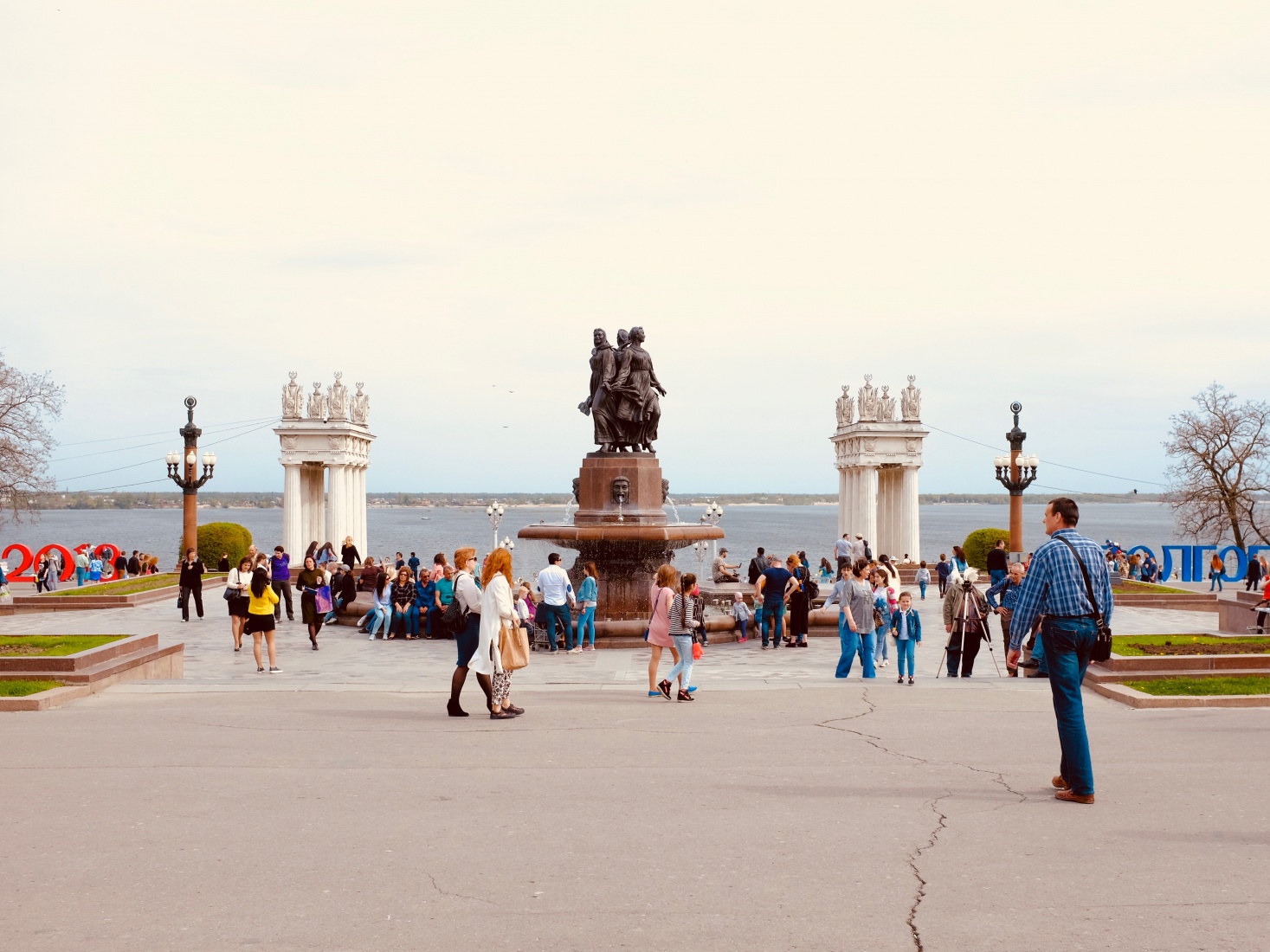 The riverfront area, away from the river station, is a pleasant place for a stroll, with pretty views out over the Volga. Photo by Mark Baker.

In addition to the WWII attractions, Volgograd’s position on the river affords ample chances to enjoy the water. Kruiz is one of several companies that offer short out-and-back pleasure cruises on the river, as well as longer floats to ports at Astrakhan and Kazan. The centre of the action is Volgograd’s dilapidated but impressively Brutalist river station – forever awaiting a long-overdue fix-up.

For a city that saw so much wartime destruction, modern Volgograd is a pleasingly peaceful place. Central Prospekt Lenina is covered in green and sports a long park, dotted with statues, along its centre. The pedestrianised Alley of Heroes leads down to the waterfront from here. A popular evening stroll begins at the bottom of ul Komsomolskaya and runs north through a park along a ridge above the Volga River to the Panorama Museum. 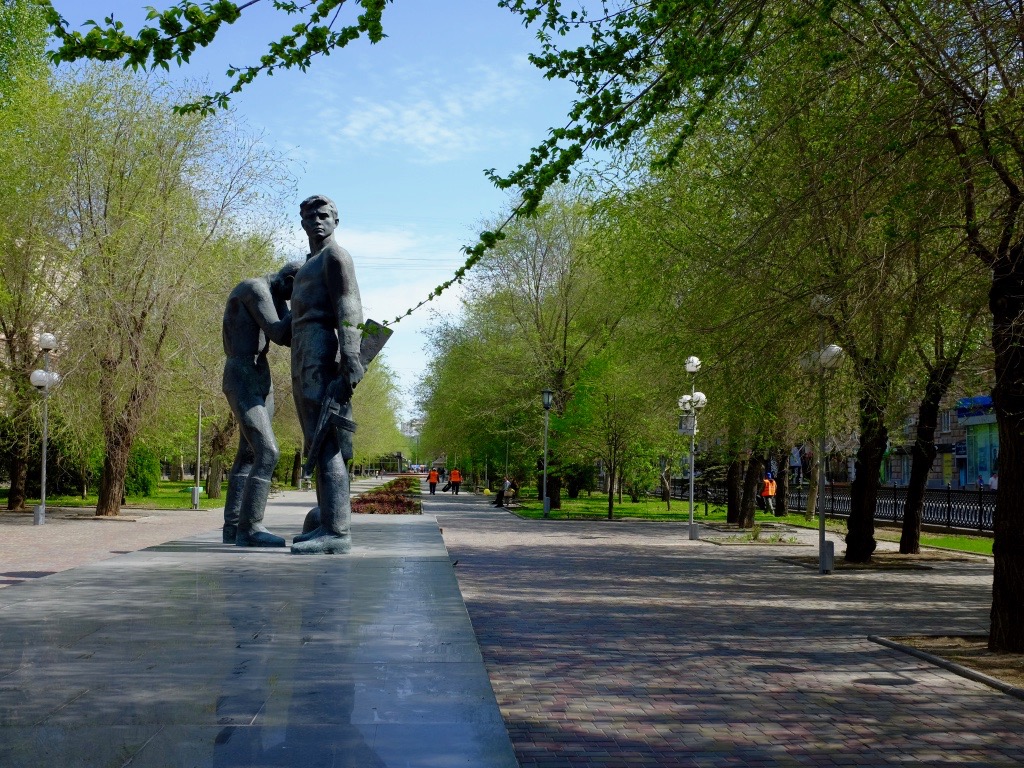 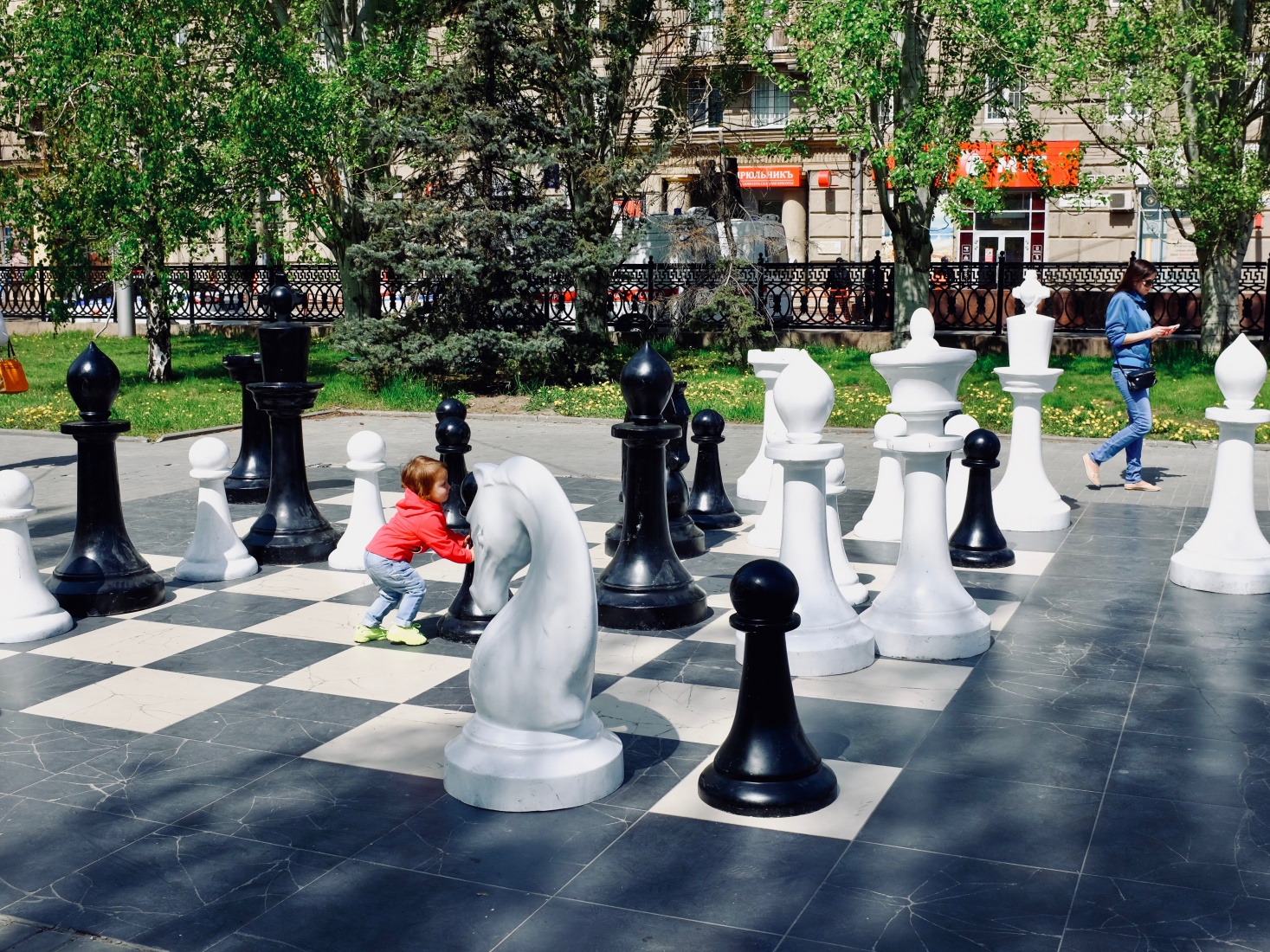 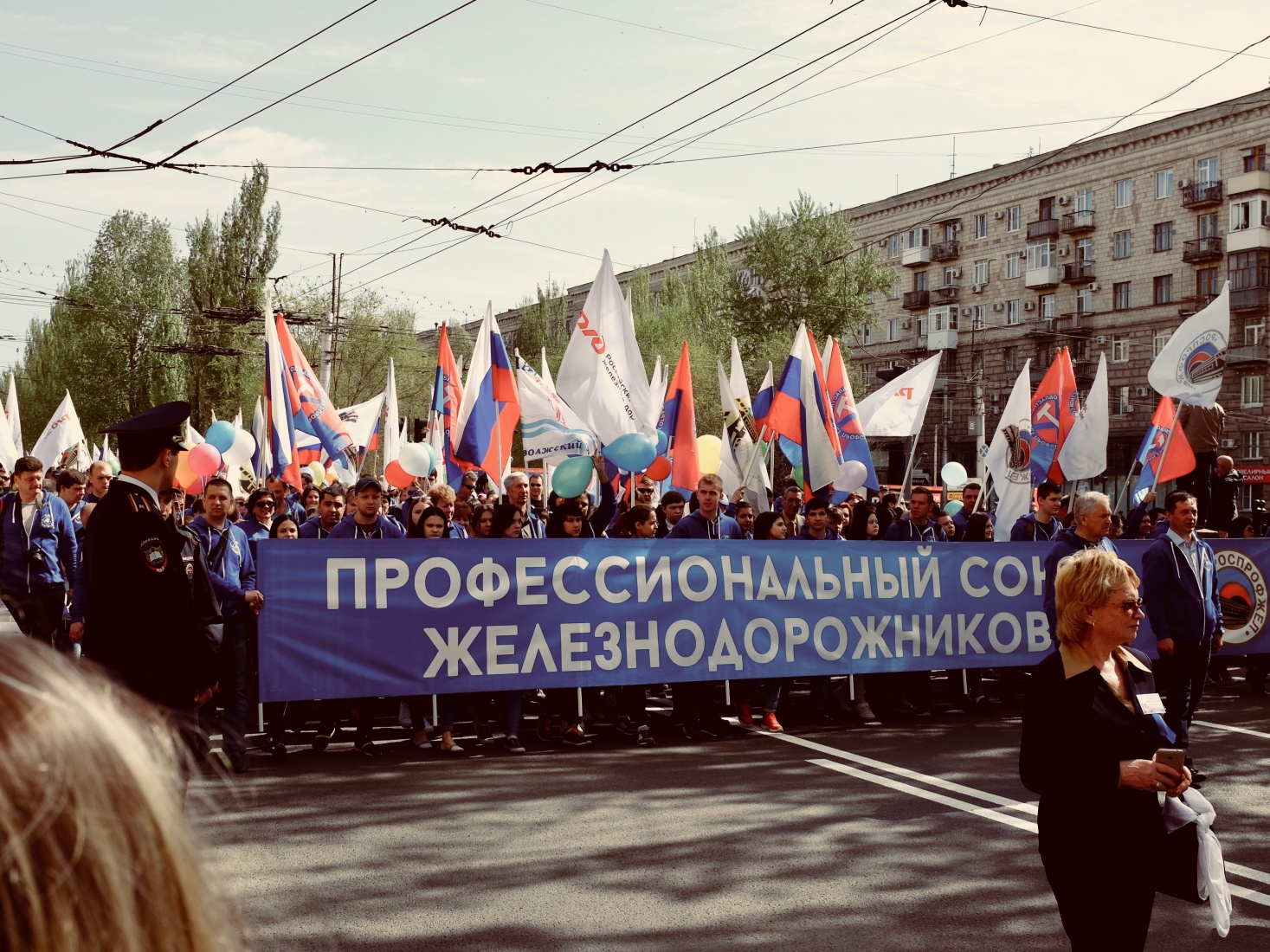 Volgograd still wears its patriotism on its sleeve. This shot is from the military parade on the May 1, 2017, holiday. Photo by Mark Baker. 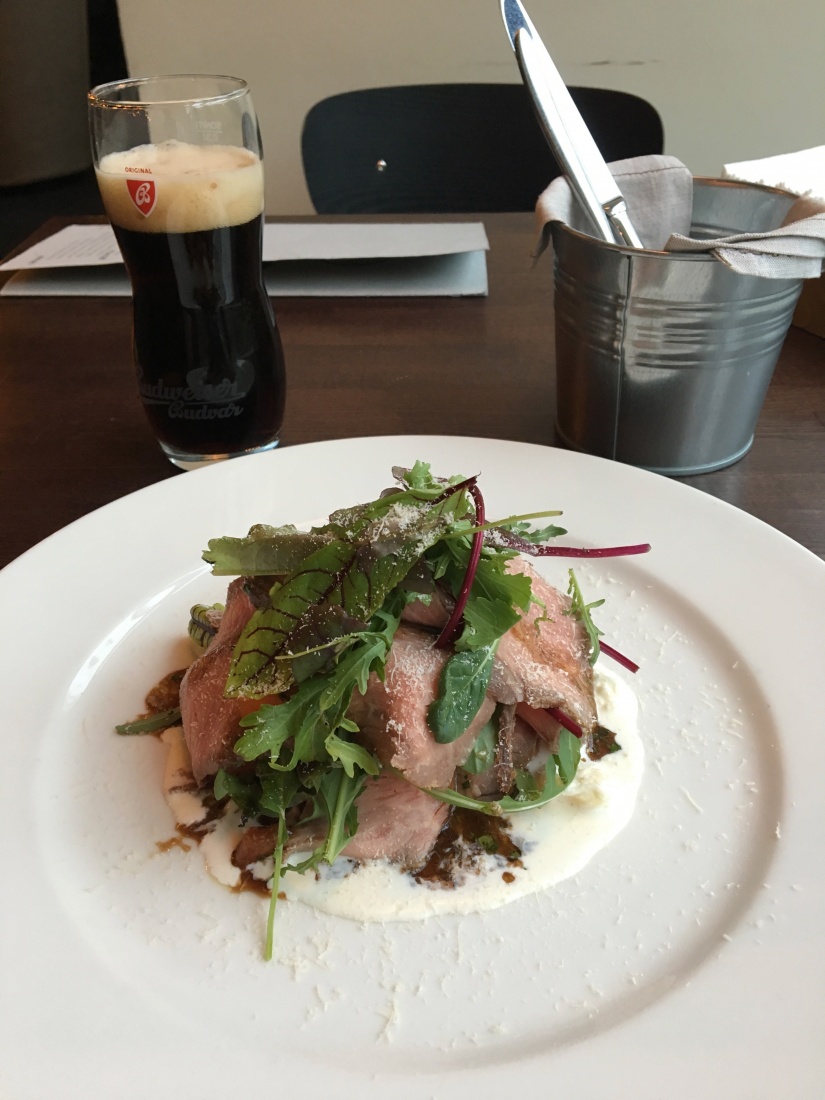 The waterfront area features some of the city’s best restaurants. For coffee and wood-fired pizzas, head for "Hungry" (alleya Geroyev 5), conveniently located on the Alley of Heroes. This upscale cafe also has great soups and salads as well as a long list of meat and fish dishes. Nearby "Na Allee" is an excellent Georgian restaurant with a family-friendly atmosphere and casks of homemade wine brought in from Georgia.

Volgograd has some of the region’s best hotels, making it the ideal spot to break up a long journey of night trains with an overnight in a real bed. "Park Inn" is a modern, moderately priced chain with a great breakfast buffet and an ideal location, just behind the train station and five minutes on foot from the bus station. The "Hotel Intourist" is all polished marble pillars and shiny chandeliers, a chance to experience Soviet-era luxury at its best. These places, of course, are likely to be booked solid for the matches. One place to turn might be the city’s helpful tourist information office.

Volgograd is one of the main stops on the rail line running north-south along the Volga. The same line connects several other FIFA World Cup host cities, including Samara, Kazan, and Nizhny Novgorod, though the distances will require at least an overnight trip. Frequent buses run to Astrakhan (10 hours) and FIFA host city Rostov-on-Don (9 hours).

The Volgograd International Airport is located 15km north of the city. There are decent daily connections to Moscow and a handful of destinations in Turkey.

This article originally appeared on Lonely Planet’s website here. Follow this link to find a handy guide to the FIFA World Cup match schedule. The most widely anticipated match pits England against Tunisia on 18 June. Poland plays Japan on 28 June.

Listen to episode #605 of the Amateur Traveler podcast, where I speak about all of the amazing sights and cities along the Volga River.