(This story was originally published in 2018.)

A trip to Slovenia's beautiful capital city, Ljubljana, is a primer in urban aesthetics, so it's perhaps not so unusual the topic was on my mind a lot as I walked around the city in March updating content for Lonely Planet. I’ve always been a fan of the multi-talented Slovenian architect and urban planner, Jože Plečnik, and particularly for the ways that he used his design talents to decorate and elevate Ljubljana. But on this trip at least, I felt drawn more toward a different side of the city, with a decidedly different aesthetic vibe. I’m still grappling with why.

Top Photo: Away from the studied beauty of Jože Plečnik's Ljubljana, I found immense pleasure staring at the derelict, gorgeous, craptastic public art of the city's two main squats. This is the older of the two: Metelkova Mesto. Photo by Mark Baker.
Posted in Diversions, On The Road and tagged aesthetics, Architecture, Brancusi, Ljubljana, metelkova mesto, Plecnik, rog, Slovenia, squat.
Add a comment 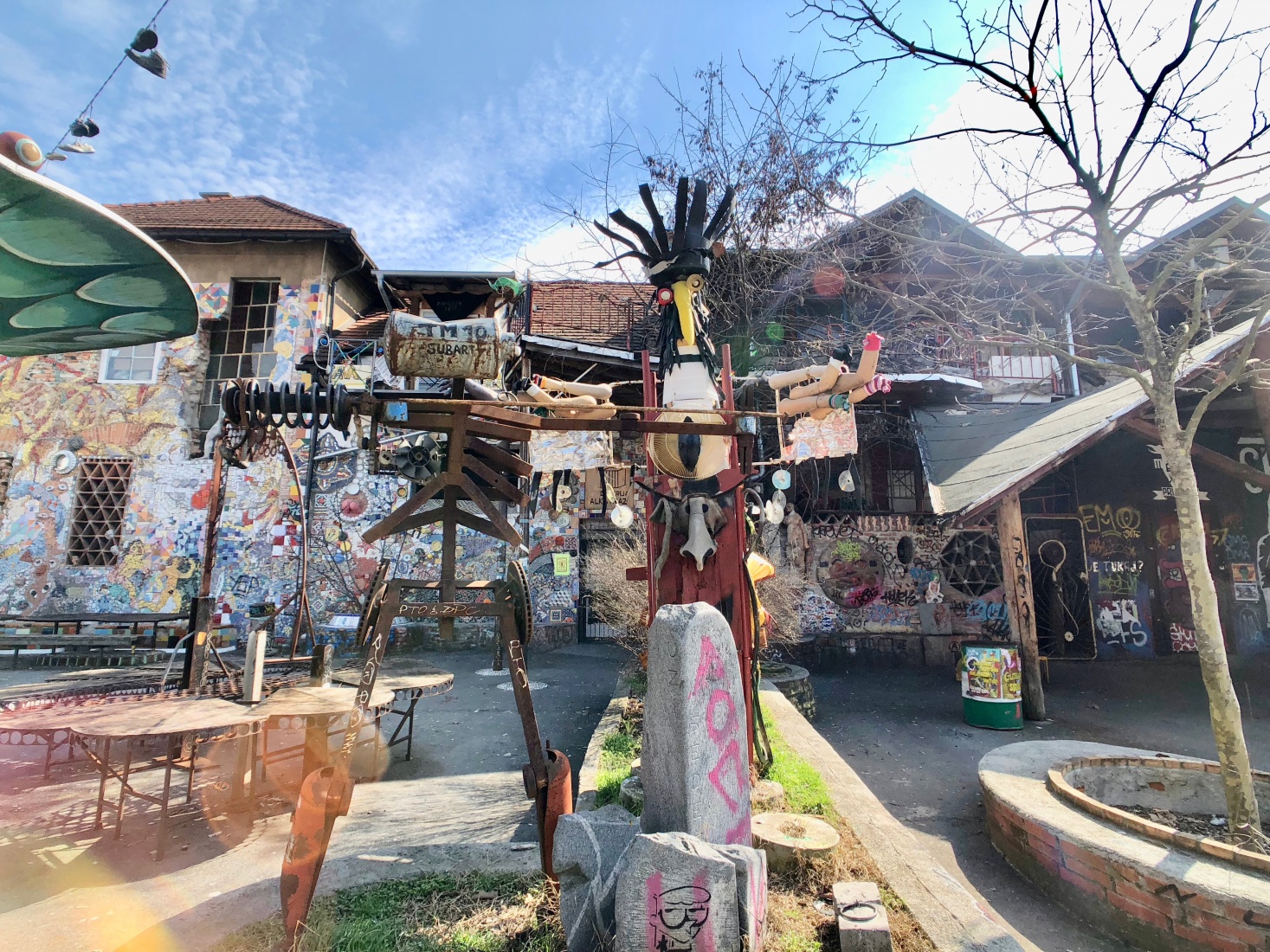 The Metelkova Mesto squat in all of its glory is certainly a feast for the eyes, and the lens of my phone. Photo by Mark Baker. 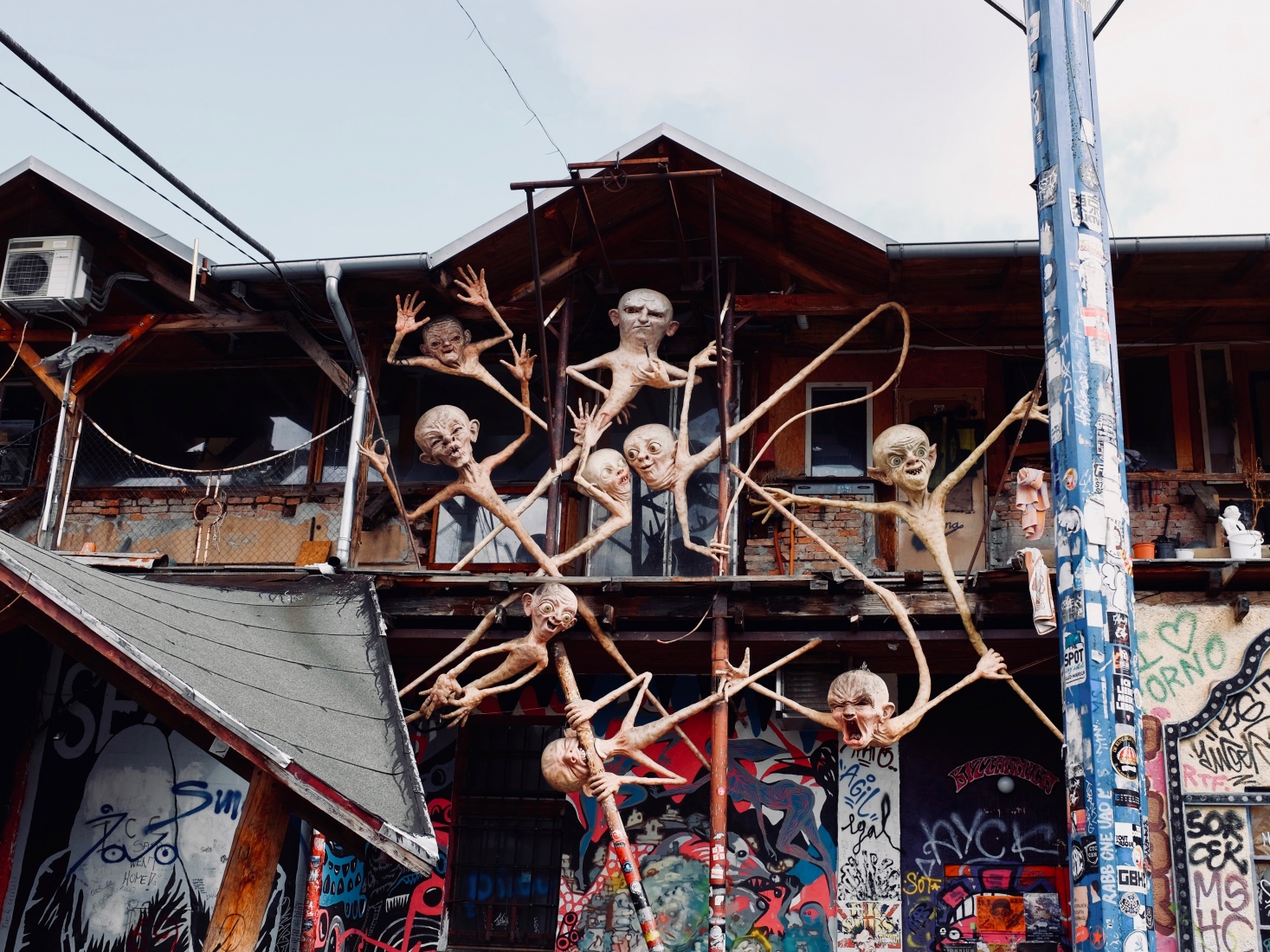 These demons are probably the most-photographed image of Metelkova Mesto, but also betray the squat's age. The images hadn't changed since my last trip here in 2012. Photo by Mark Baker. 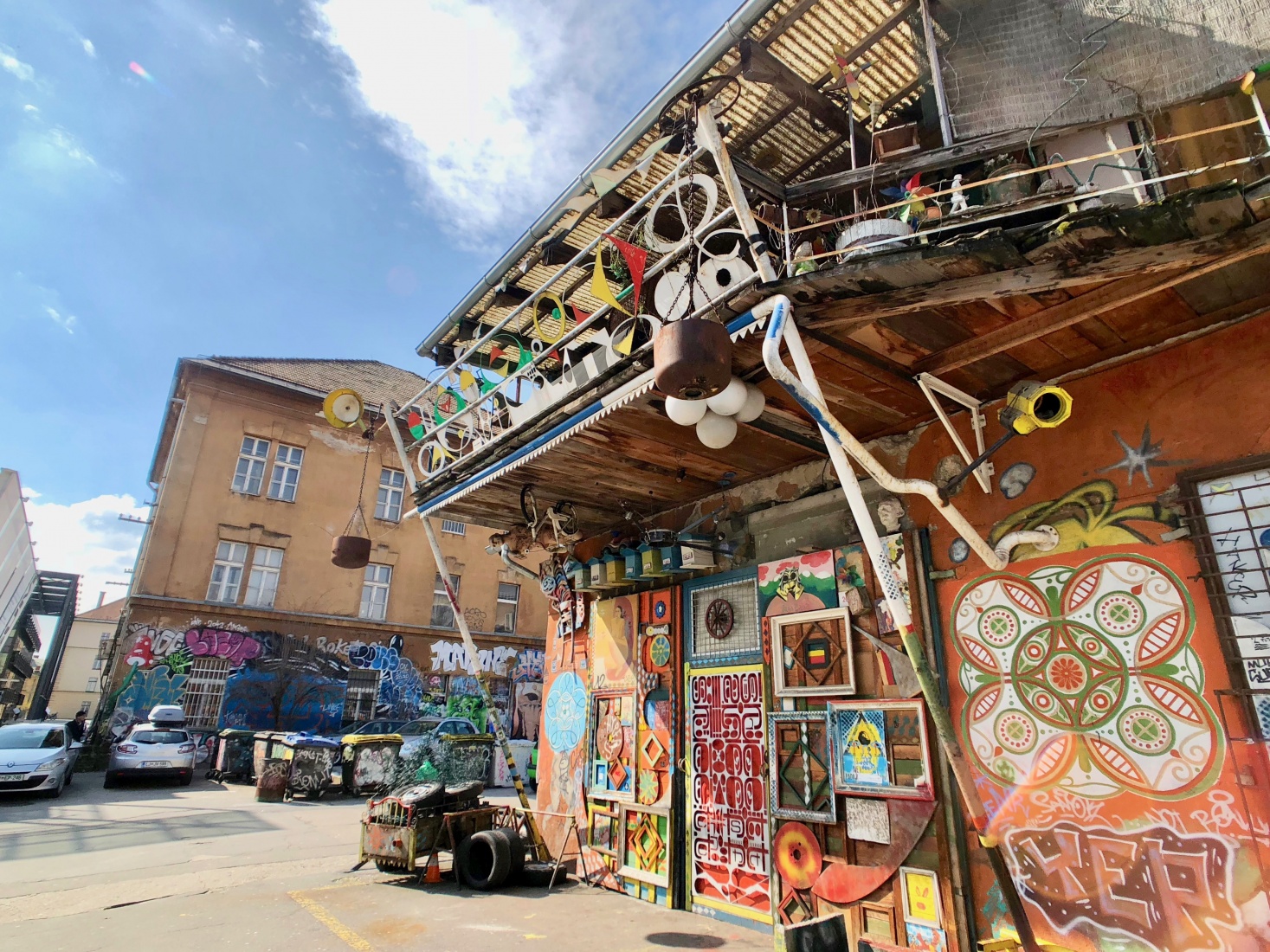 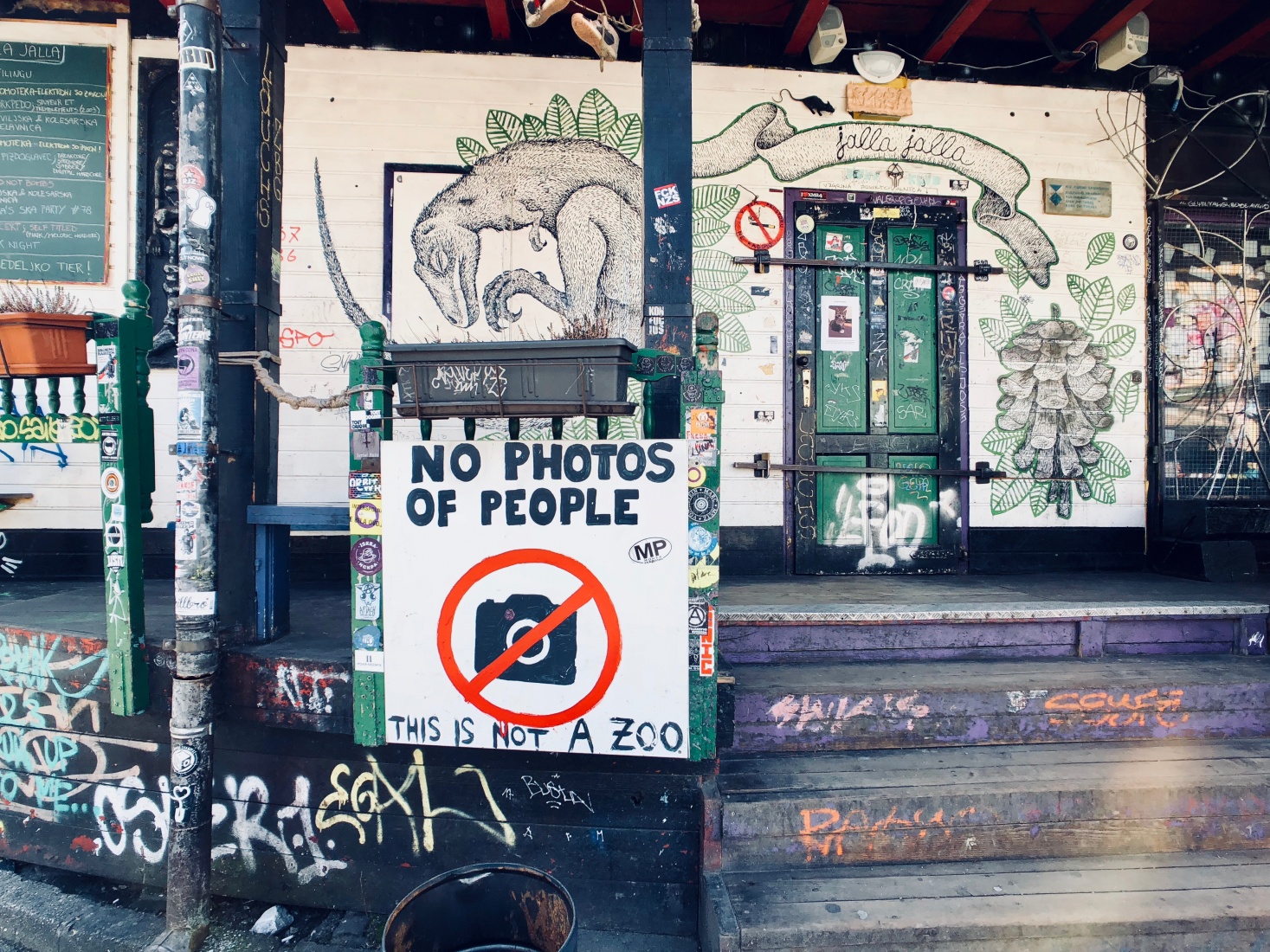 Signs like these, at Metelkova, tend to backfire. For some reason, when I first saw it, I thought of an old guy screaming at the kids: "get off my lawn." Photo by Mark Baker.

I spend a lot of my time -- probably more than is healthy -- thinking about esoteric things like aesthetics and the ways that our collective sense of beauty change over time. I guess it's what travel writers do, since we spend our days staring at and describing buildings and places.

Maybe it's the power of Instagram. These things all make for really great photos.

I have a working theory that the way aesthetic standards evolve over time may even be a kind of adaptive mechanism for our species. I mean that in a similar way it might help a species over time to develop webbed feet or something like that, it might benefit us to develop the capacity to find beauty in the detritus of our own societies: broken windows, abandoned factories, and graffiti-scrawled walls.

Anyway, all that stuff was bouncing around in my head as I ambled up and down the streets of Ljubljana last month to update information on the city's museums, restaurants, clubs, and hotels. As anyone who's ever been to Ljubljana knows, it's an uncommonly beautiful city. Many people may not realize, though, it also has a darker, more-anarchistic side: namely, a couple sprawling, student-occupied squats that strike a very different aesthetic chord from the center. I became very interested on this trip in seeing how those different sides of Ljubljana relate to each other. 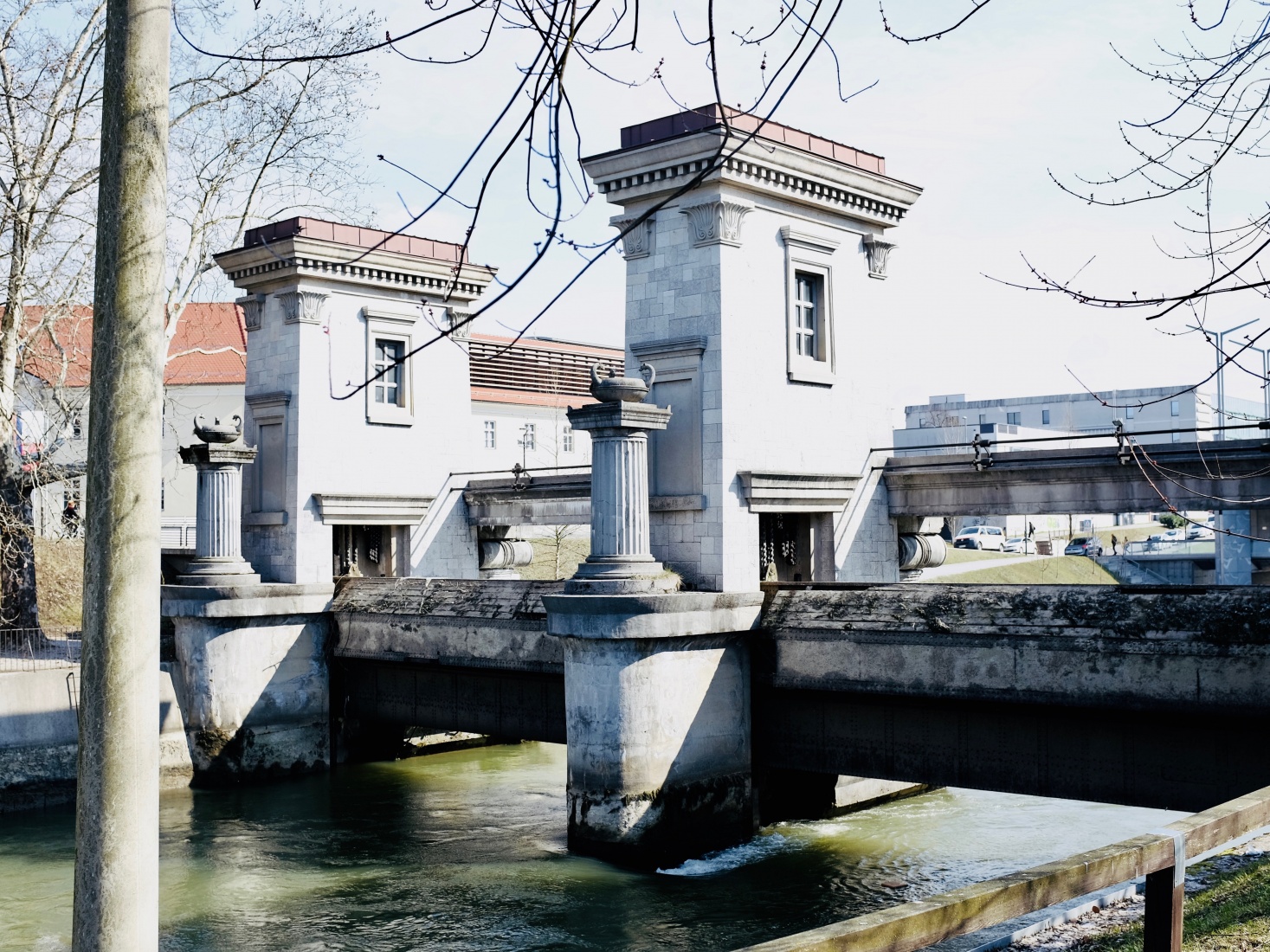 The Slovenian architect Jože Plečnik infused even mundane, every-day objects, such as this lock in the river, with a sense of stateliness and beauty. Photo by Mark Baker. 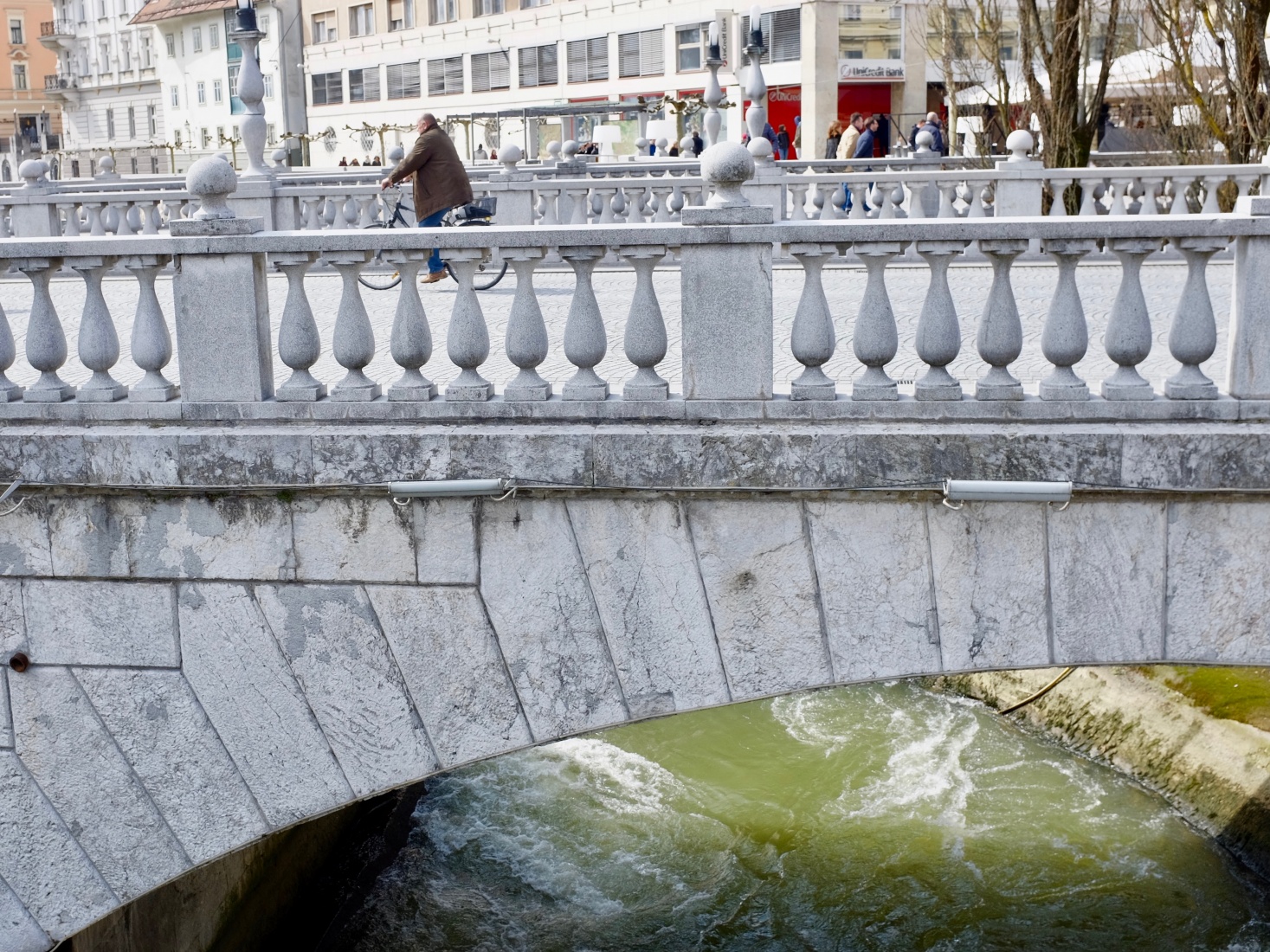 A slice-of-life scene from Jože Plečnik's Ljubljana, showing the decorative spindles of a bridge above an opulent, green river. Photo by Mark Baker. 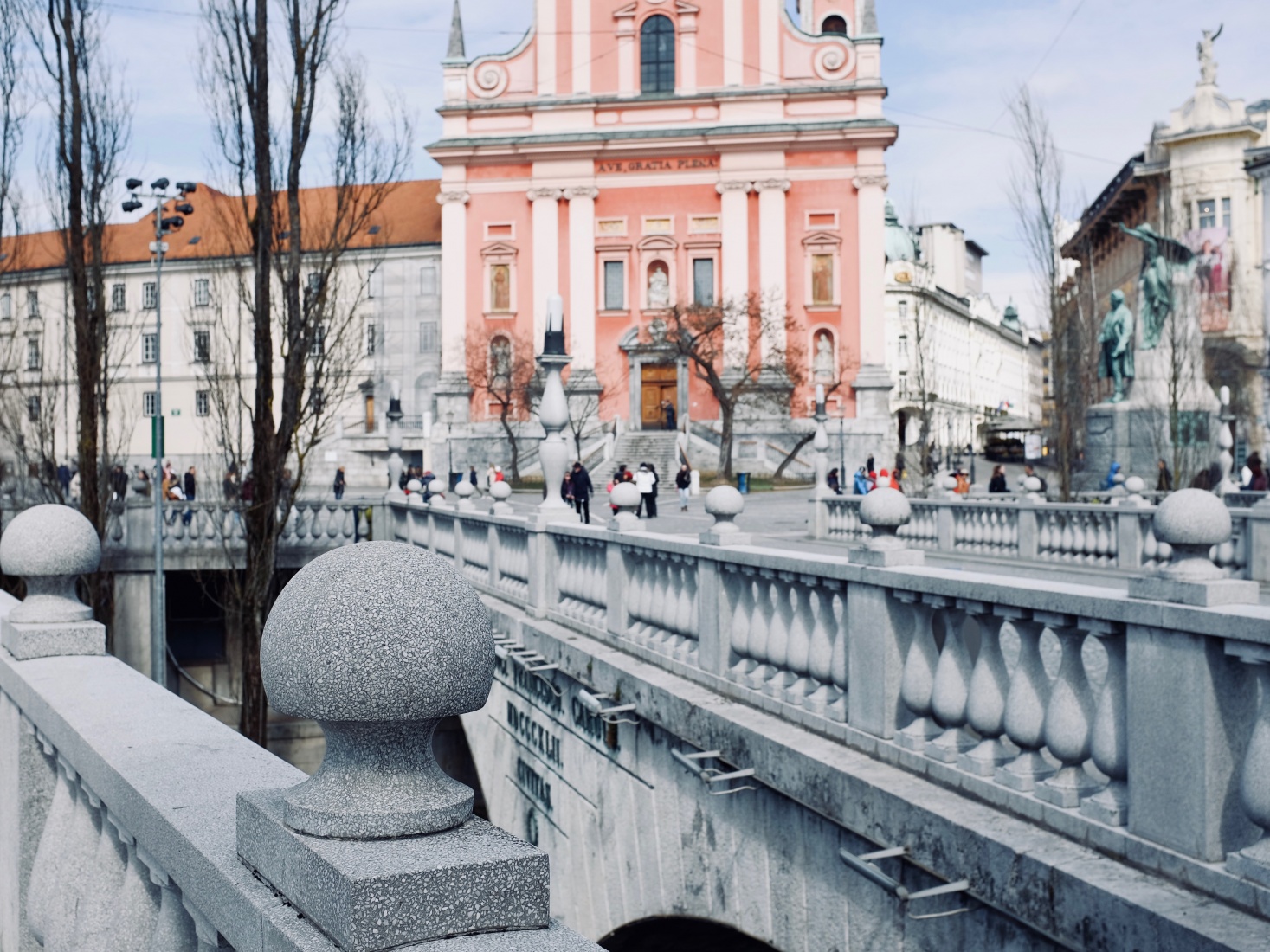 Jože Plečnik's 'Triple Bridge' is not just a handy way to cross the river; it's a study in bridging the tension between beauty and utility. Photo by Mark Baker.

Even if there had never been a Slovenian wunderkind named Jože Plečnik, Ljubljana would have been an appealing place. Consider first the city's natural landscape: a narrow, emerald-green river flowing through a rough-cut valley and around a rocky hilltop, dotted by an old castle. Then, there are those colorful 19th- and early-20th century buildings strung out along the river that have aged so gracefully; the vines and moss that cover their river-facing fronts lending a touch of gravitas.

Toss in Plečnik, though, and the city becomes that "jewel box" cliche that travel writers aren't supposed to use but which in Ljubljana's case is perfectly apt. For readers who may not be familiar with Plečnik, he was an architect and city planner who, throughout the middle of the 20th century, made it his life’s work to dress up and accessorize Ljubljana precisely as if it were a beautiful woman. How else to describe, if not as pieces of jewelry, all of those alabaster pillars and pyramids, orbs, and spindles he sprinkled all along the river, on the bridges, on the tops of the buildings, and sometimes even in the middle of residential neighborhoods?

Plečnik, for me, is something like a mash-up between the Romanian sculptor Constantin Brâncuși and New York’s urban-planner extraordinaire Robert Moses. He combined Brâncuși’s instinctive minimalism and feel for symmetry and proportion with Moses’s raw power to bend an entire metropolis (in Moses's case, the five boroughs of New York) to own his will.

Plečnik was also a consummate, obsessive aesthetician, a fact one sees clearly in his acclaimed “Triple Bridge,” which walks a tightrope of beauty and utility as it links Ljubljana’s main Prešeren Square with the city’s “Old Town” across the river. Like Ljubljana itself, it’s a masterwork on a minor scale.

Yet, and that’s a big “yet,” as much as I was taken by Plečnik’s Ljubljana, my heart kept pulling me to a different part of the city – one where a rawer, more-modern, in-your-face sensibility has taken hold. 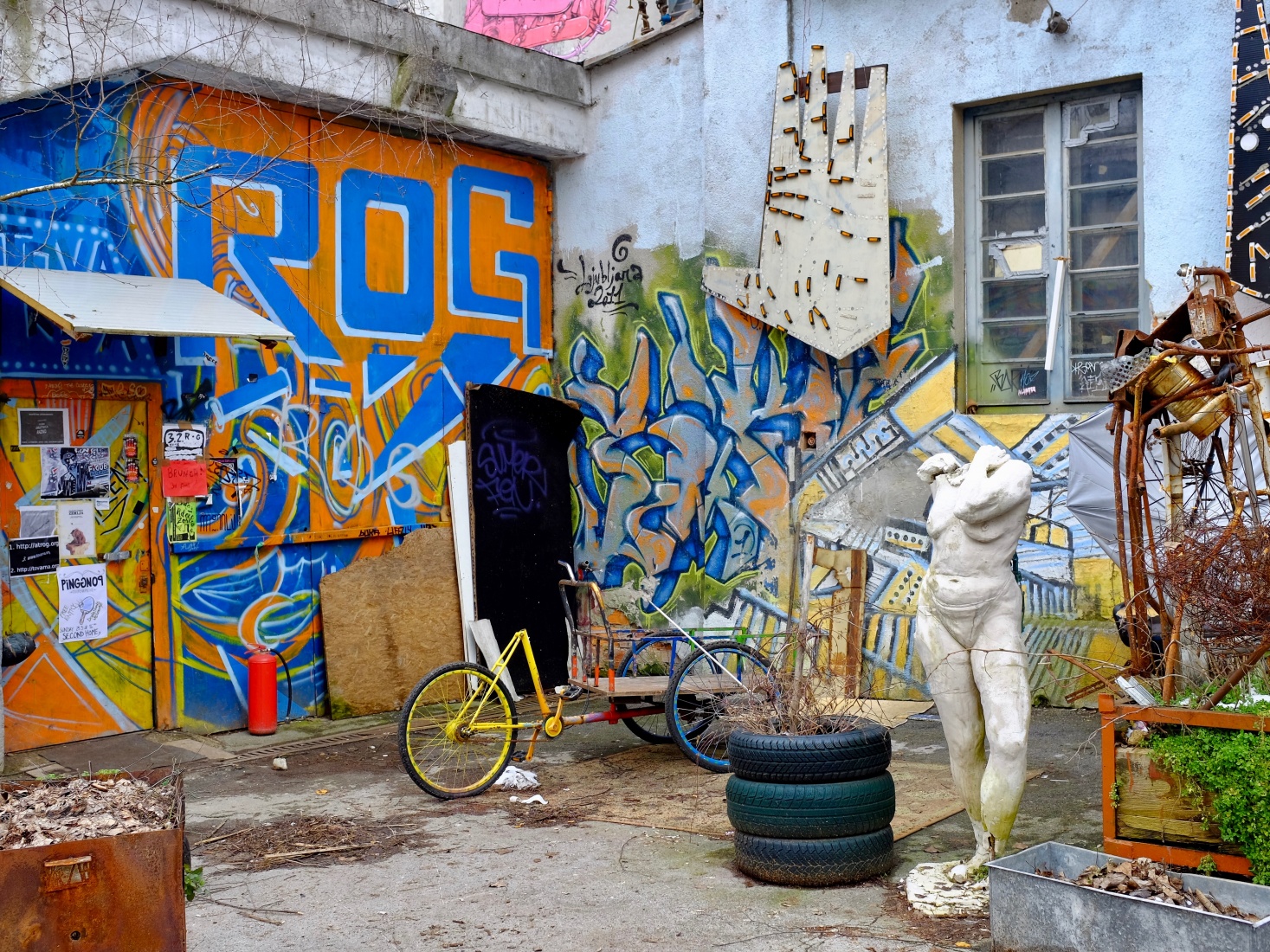 The detritus of the Rog squat, which I found to be a bit fresher than Metelkova Mesto. Photo by Mark Baker.

The Rog squat is a bit younger than Metelkova Mesto and not quite as oriented toward commercial bars and clubs. Photo by Mark Baker. 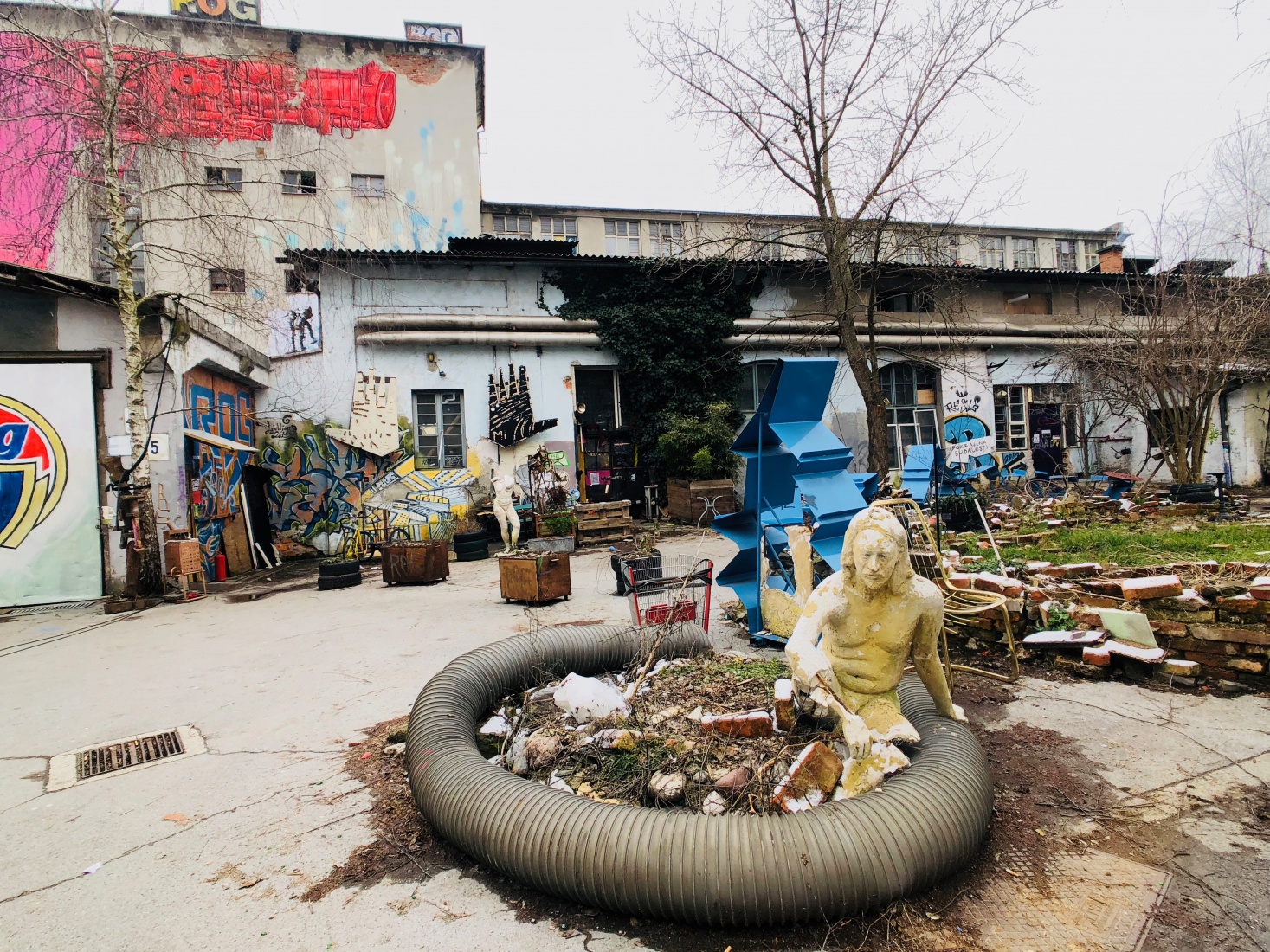 I had known about Ljubljana’s most-famous squat, Metelkova Mesto, for many years, but I was unaware until this most-recent trip that the city also has a second, even larger, squat – called “Rog” – closer to the historic center (see the map plot, below). By “squat,” I mean a former, disused public or private space -- Metelkova was an old army barracks, Rog a bicycle factory – that was abandoned and eventually occupied by students. Metelkova was first squatted in the early '90s; while Rog celebrated its 12th anniversary during my visit.

Once I had walked through Rog's big gate and into its junk-strewn front yard on the second night of my trip, I knew I had found my people.

As I write these words in 2018, the legal situation of both places remains unresolved, though Metelkova was a declared a national cultural heritage site in 2006, so it at least enjoys protected status. The squatters at Rog are currently locked in a courtroom battle with the city and potential developers, who look on with envy at the squat’s choice riverfront location, just a mile (1.6 km) east of the Triple Bridge. No one knows whether it will carry on or one day soon be forced to close down. The fact, though, that Ljubljana can apparently accommodate these two brazen acts of civil disobedience without a full-on freak-out speaks volumes about the maturity and tolerance of the society generally.

Throughout this story, I’ve posted photos of both squats so that readers can see what they look like and, possibly, glean a little of their allure. The evolution and appearance of the two are fascinating to compare.

Metelkova, the older sibling, has matured into comfortable middle age. One has the sense that this squat, at least, has stopped rebelling against the system and has found gainful employment hosting various clubs and nightspots.

Rog, the adolescent, on the other hand, still feels raw. Its “decor” (if that’s the right word to describe the abandoned chairs and sofas, rusting signs, and old tires stacked into pillars that litter the lawn) feels more honest. In talking with the guys who run the squat, I got the feeling that Rog doesn’t yet know what it wants to be – and that’s fine. For the moment, it hosts low-key musical acts as well as various discussion forums and art galleries.

Pro tip: If you want to hang out with friends over bands and beers, go to Metelkova; if you want something more chill with some arty conversation, try Rog. 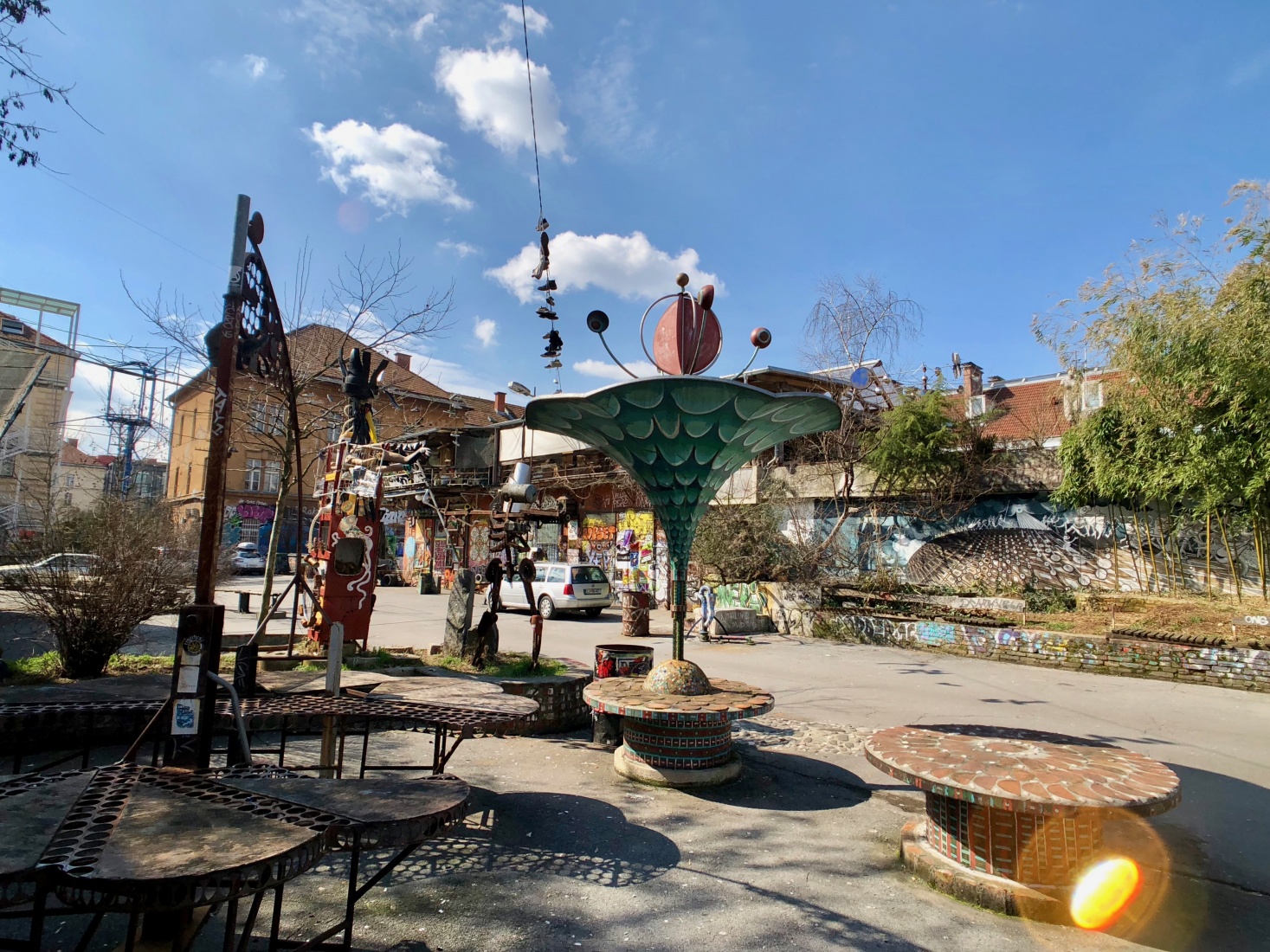 Another view of Metelkova Mesto on a sunny day in Ljubljana in March 2018. Photo by Mark Baker. 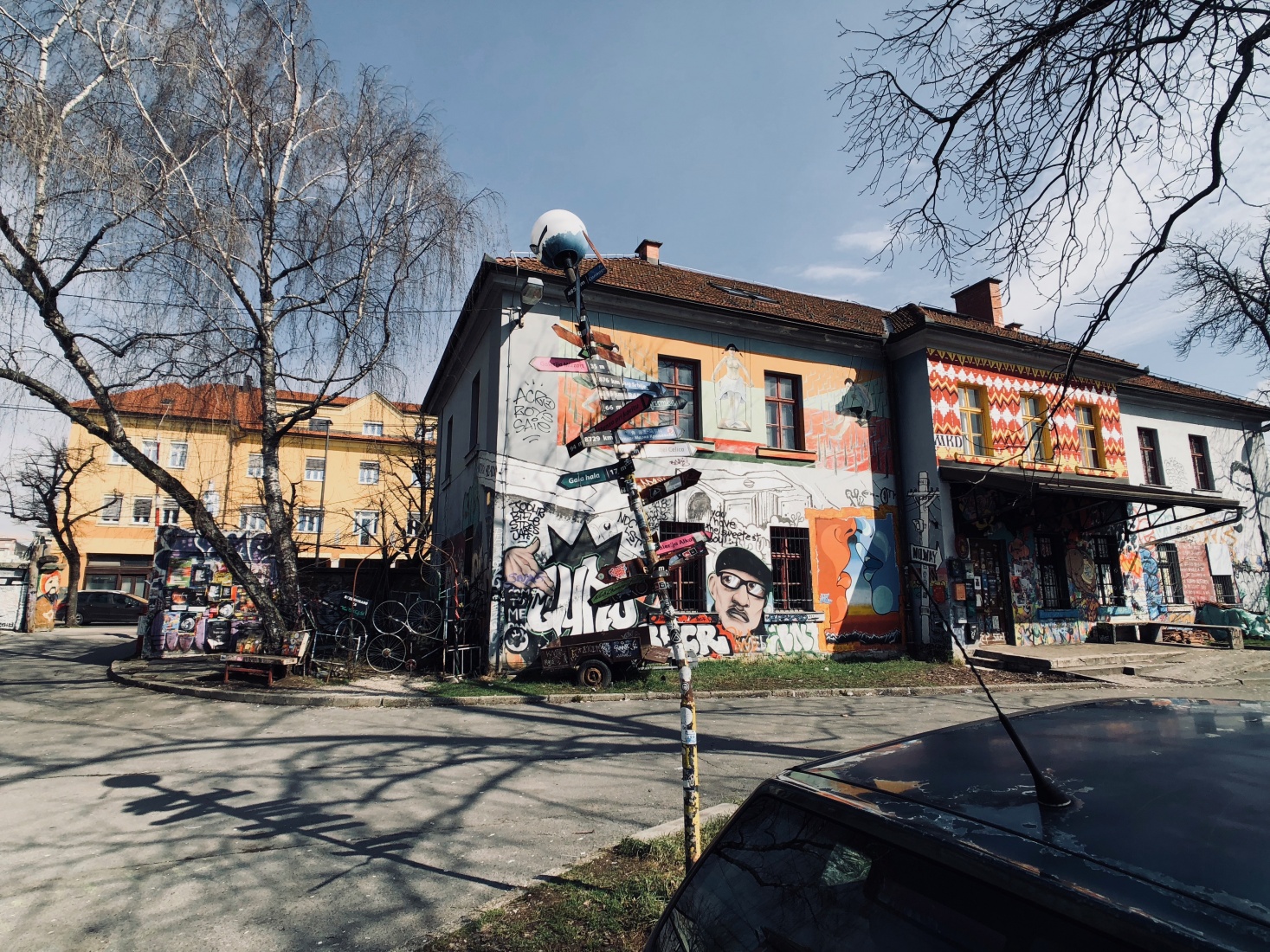 This leaning sign at Metelkova Mesto is meant to help party-goers find the right club. Photo by Mark Baker. 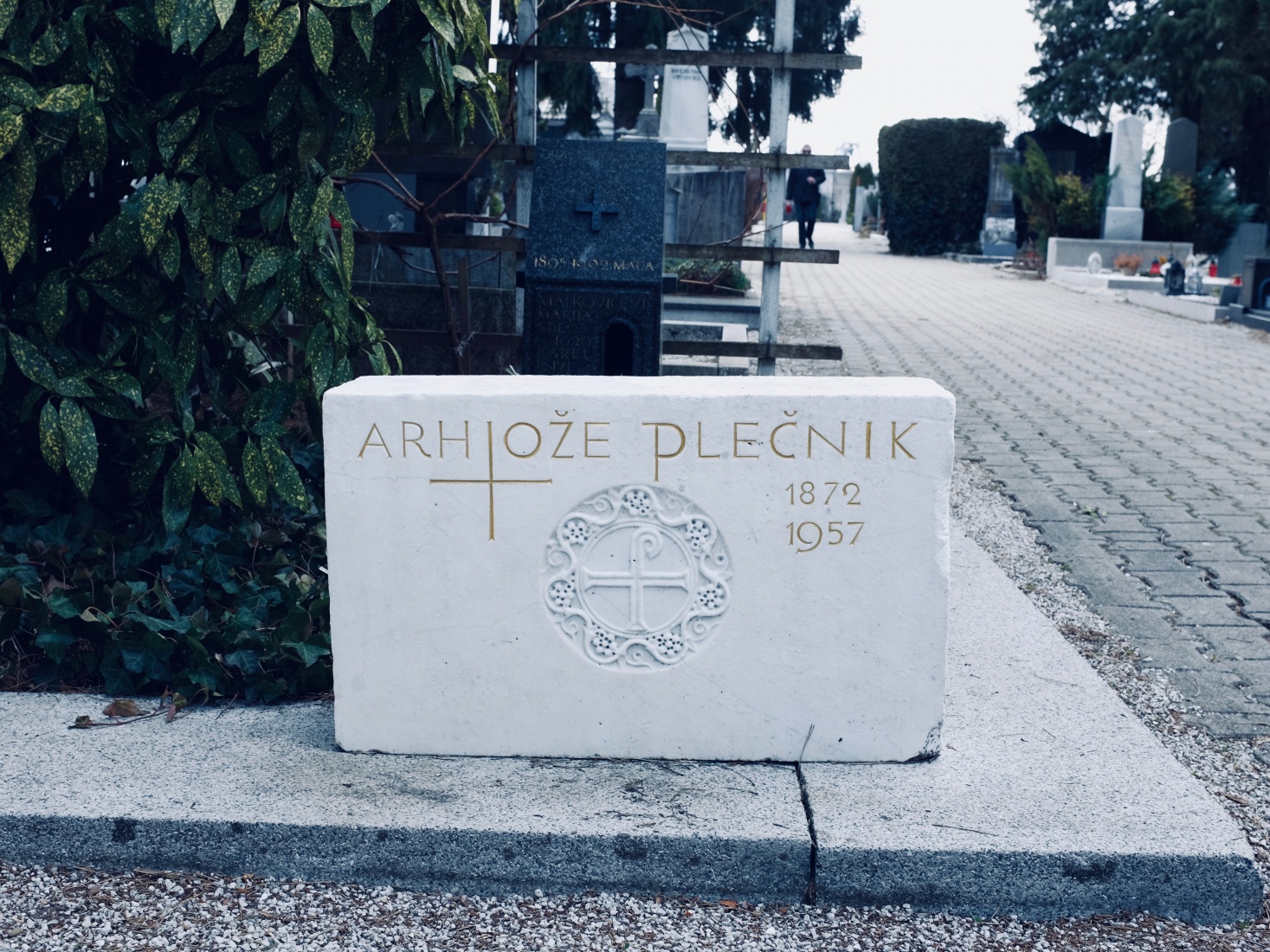 Ostentatious is life, Jože Plečnik's grave-marker is a simple block of marble. Photo by Mark Baker. 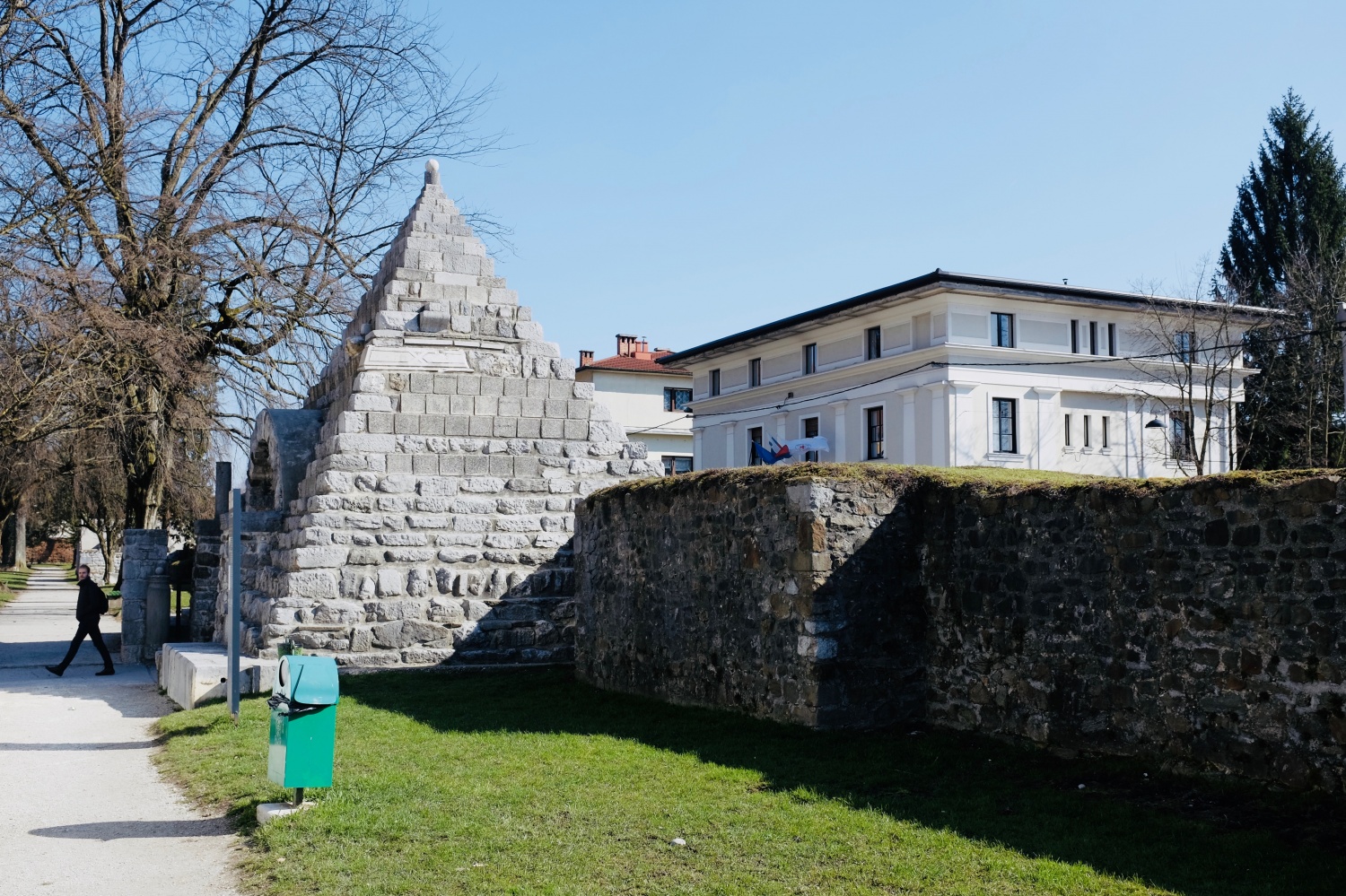 Jože Plečnik's monuments can be seen strewn all around the city. This pyramid marks where a Roman wall once stood. Why a pyramid if this is about Rome? Why not? Photo by Mark Baker.

And now to the hard part. What is it about these places -- the squats -- I find so appealing? Obviously, the brashness of the whole enterprise is cool. I love the anarchic, free-wheeling feeling (though I’m anything but an anarchist in my own politics). There’s also something pleasing about the way the makeshift decor pokes fun at mainstream art.

My contemporary eyes have now been conditioned to see these places as beautiful, and I really do.

There could be an additional explanation at work too. I'll use an example from the city I live in, Prague, to illustrate what I mean. When people first come to Prague and visit the city’s famed Charles Bridge (a stark, stone bridge topped by 30 religious statues), they’re inevitably moved by some inexplicable quality – a vibe -- the bridge exudes.

The structure is undeniably pretty, but at least part of the explanation for this, I think, is that Charles Bridge actually embodies two distinct architectural styles. The bridge section itself is in a sober Gothic style from the 14th century, while the statues are softer, showing off the kind of exaggerated exuberance you typically associate with 17th and 18th century Baroque. Instead of clashing, though, the two styles create a kind of friction you can actually feel, whether you’re an architectural historian or not.

And so it might be something of that same effect going on in Ljubljana as well: the brashness and disorder of the modern-day squats contrasting in some way with Plečnik’s precious, studied minimalism and, in the process, adding layers of complexity and tossing into the air a sort of kinetic "conversation. Whether these two sides of Ljubljana realize it or not, they seem to feed off of each other in some sense, and I was simply there to listen in. 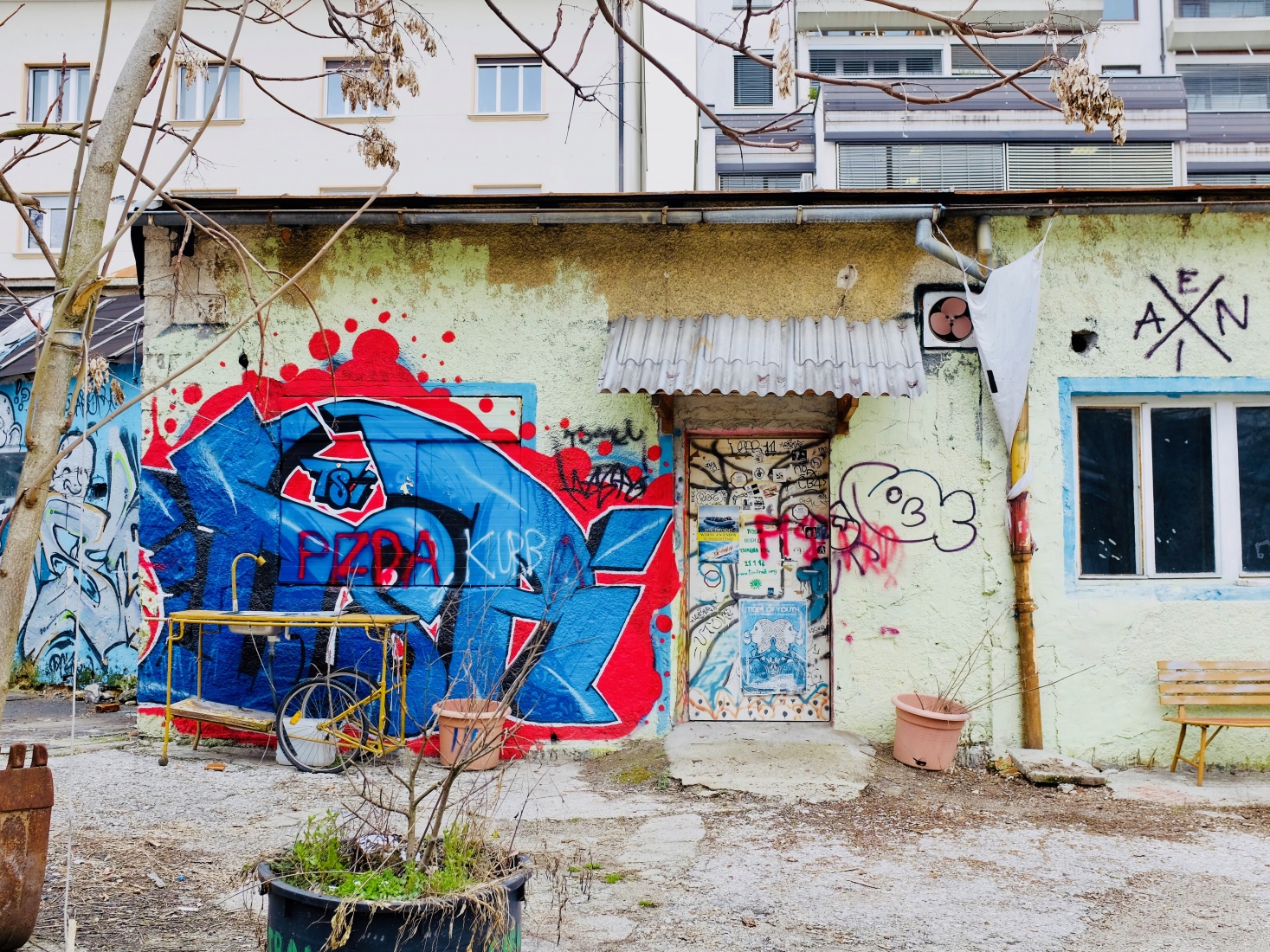 In meandering around Rog, it's hard to know from the outside what's going on on the inside. Photo by Mark Baker. 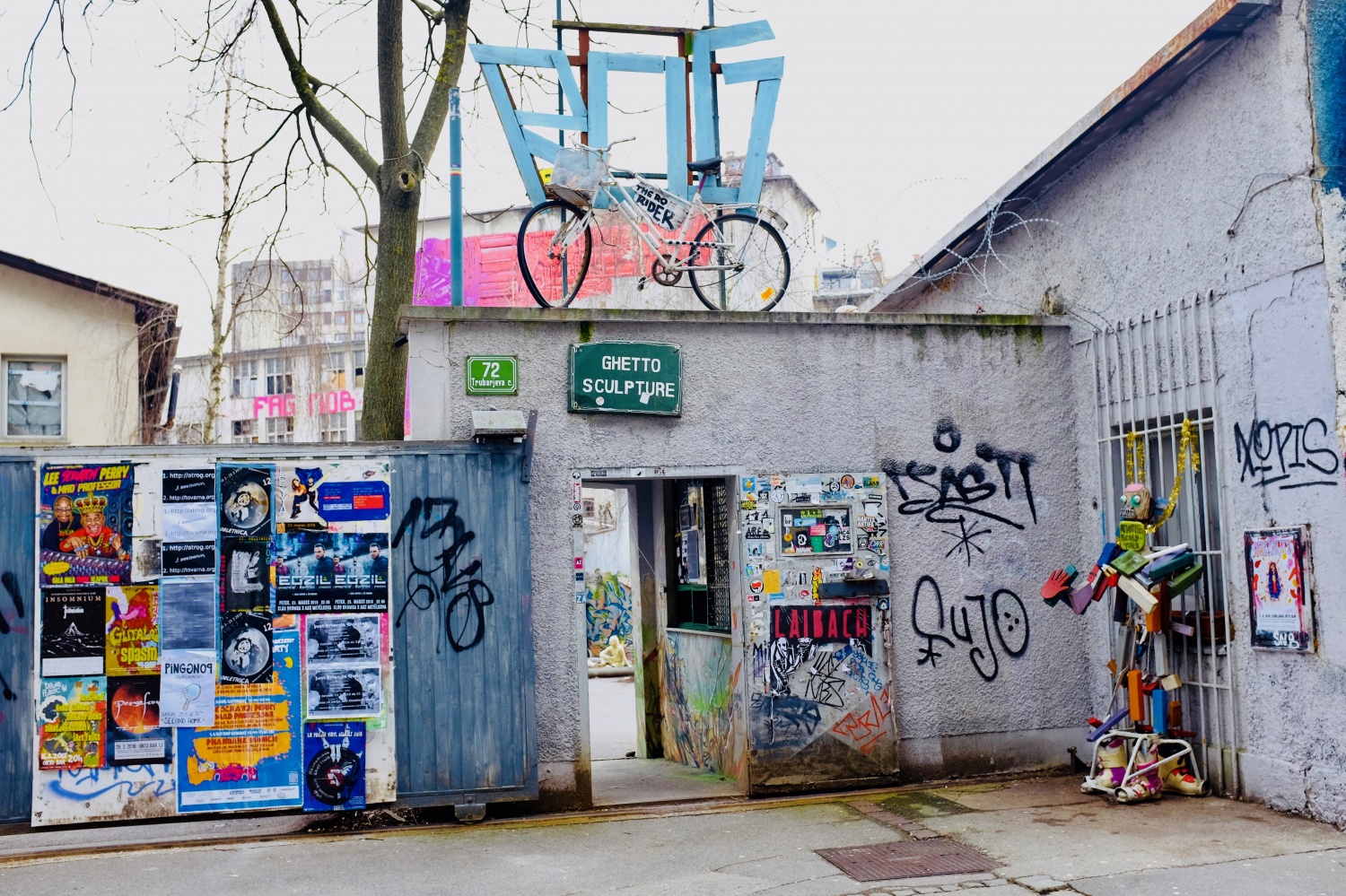 The entrance to the Rog squat, a former bicycle factory. Note the bike over door and the word 'Rog." Photo by Mark Baker. 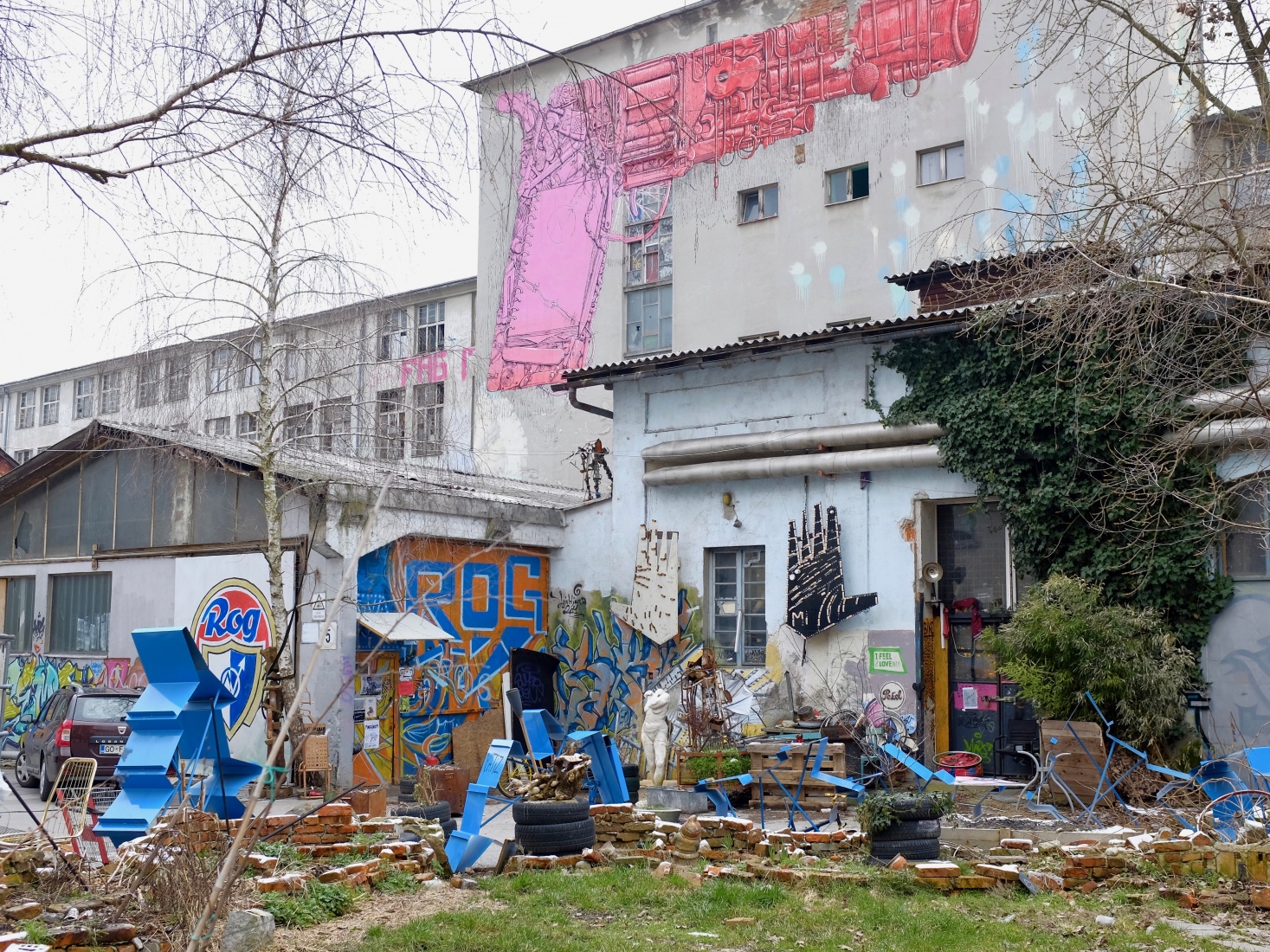 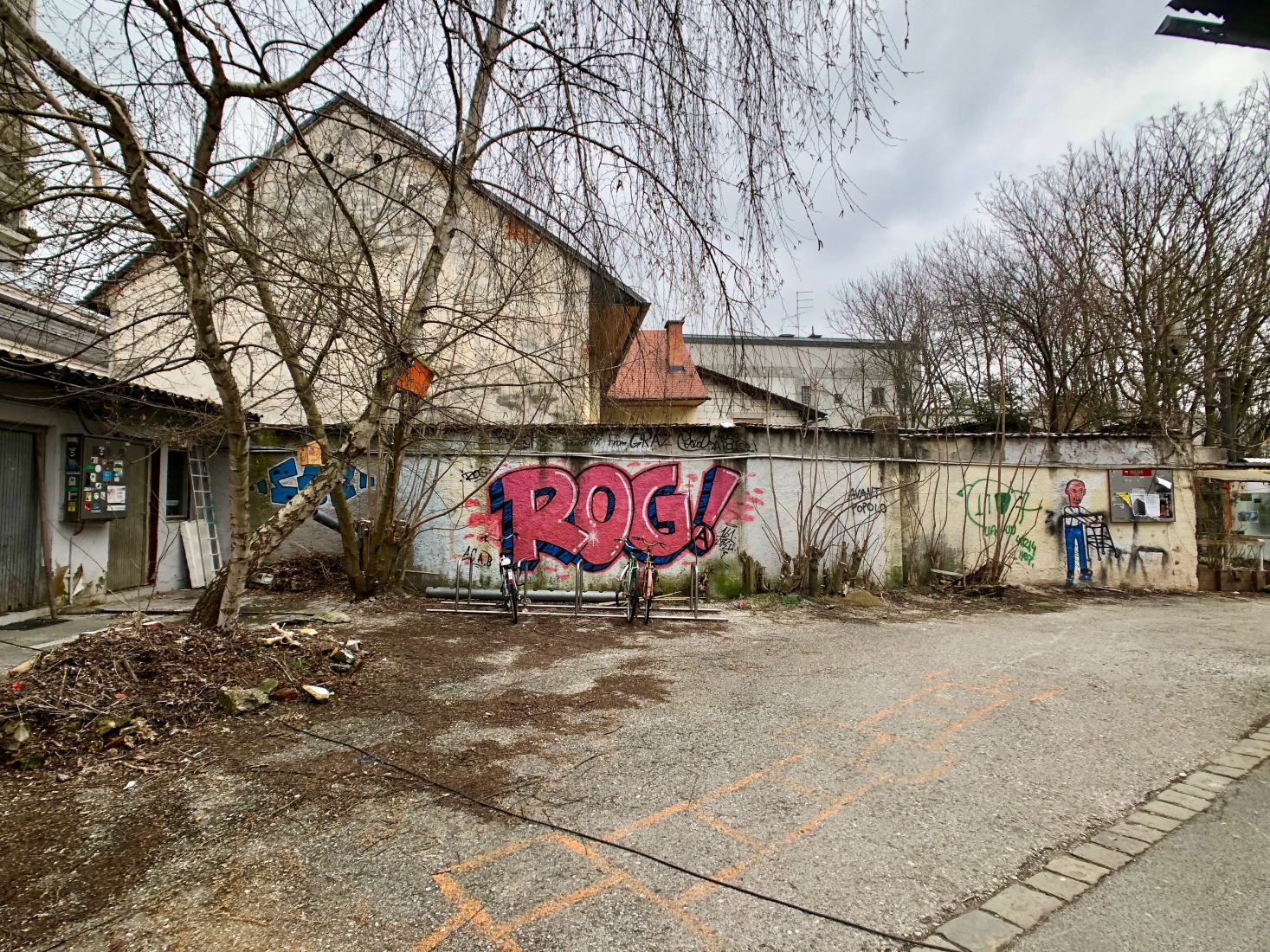 One of the dividing walls of the Rog squat. Photo by Mark Baker.