(This story was originally published in August 2018)

I'm currently on the road in Romania for Lonely Planet. Moving from city to city, carrying out research and writing up my notes, doesn’t allow much time for posting to my blog. Instead of the usual long-form stories, for this trip at least I’ll simply write up some quick hits of the places I’m visiting and share some thoughts and photos.

Don’t look for logical order in these posts. I’ve never found a straight line through Romania, and on this trip I’m jumping from place to place. I’m typing this on a (finally) cool summer evening in the Transylvanian city of Brașov, but this post deals with a place in a different part of the country, the southwest, and the derelict, historic Baths of Hercules (Băile Herculane).

Top Photo: 'Entry Prohibited.' The bridge from the main road to the grand Neptune Baths is closed as the structure is too dangerous to cross. The beauty of the building comes through in spite of the dilapidated state. Photo by Mark Baker.
Posted in On The Road and tagged Fermor, Hercules, Lonely Planet, Romania, Travel.
Add a comment 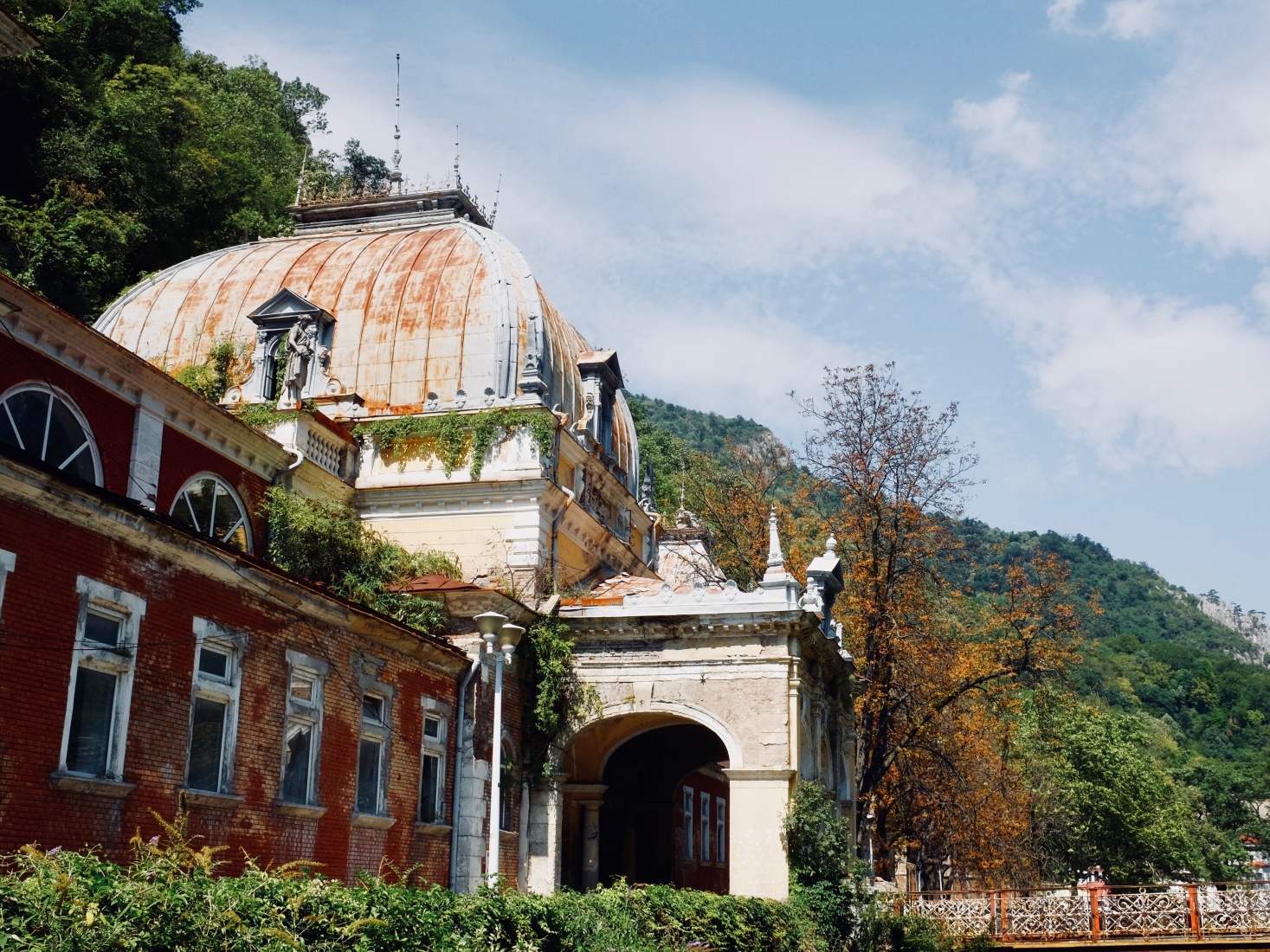 The crumbling remains of the some of those alabaster statues that so caught the eye of a young Patrick Leigh Fermor in the 1930s. Photo by Mark Baker. 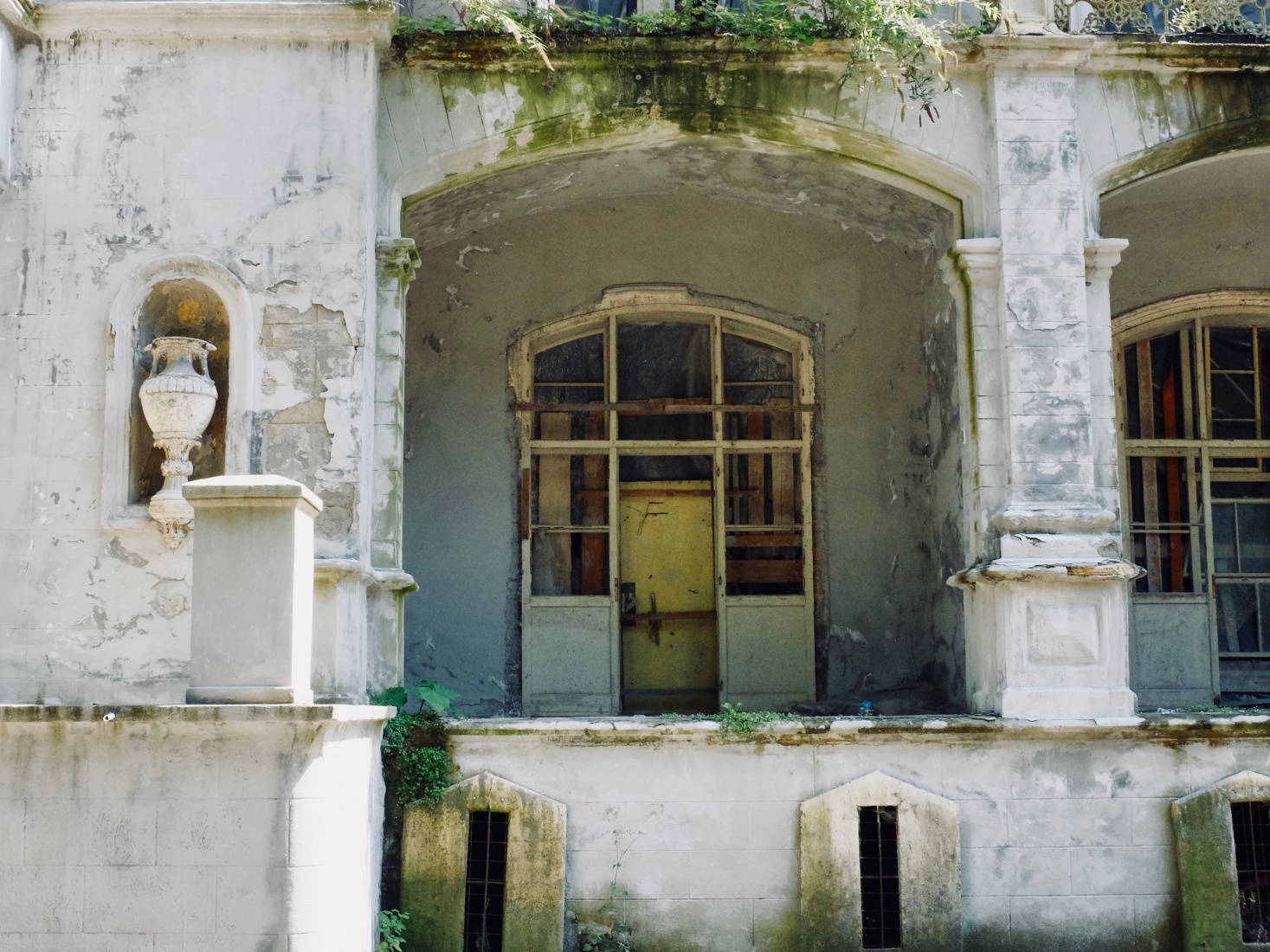 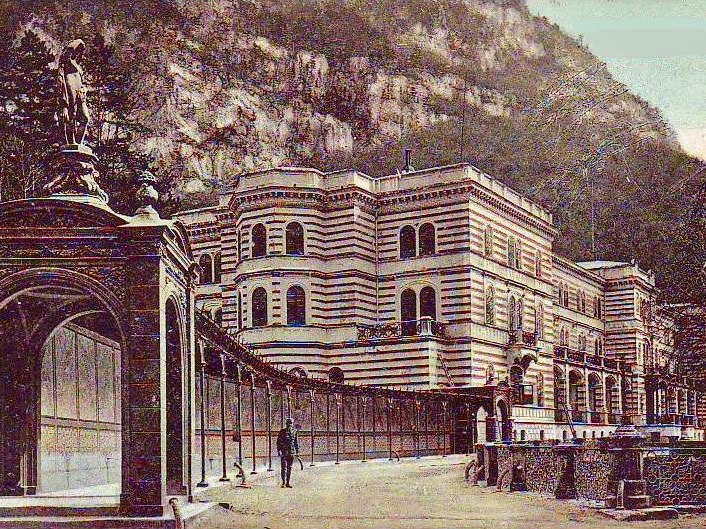 A postcard of the baths and arcadeds from the early 20th century, by unknown - Public Domain. https://commons.wikimedia.org/w/index.php?curid=28820662 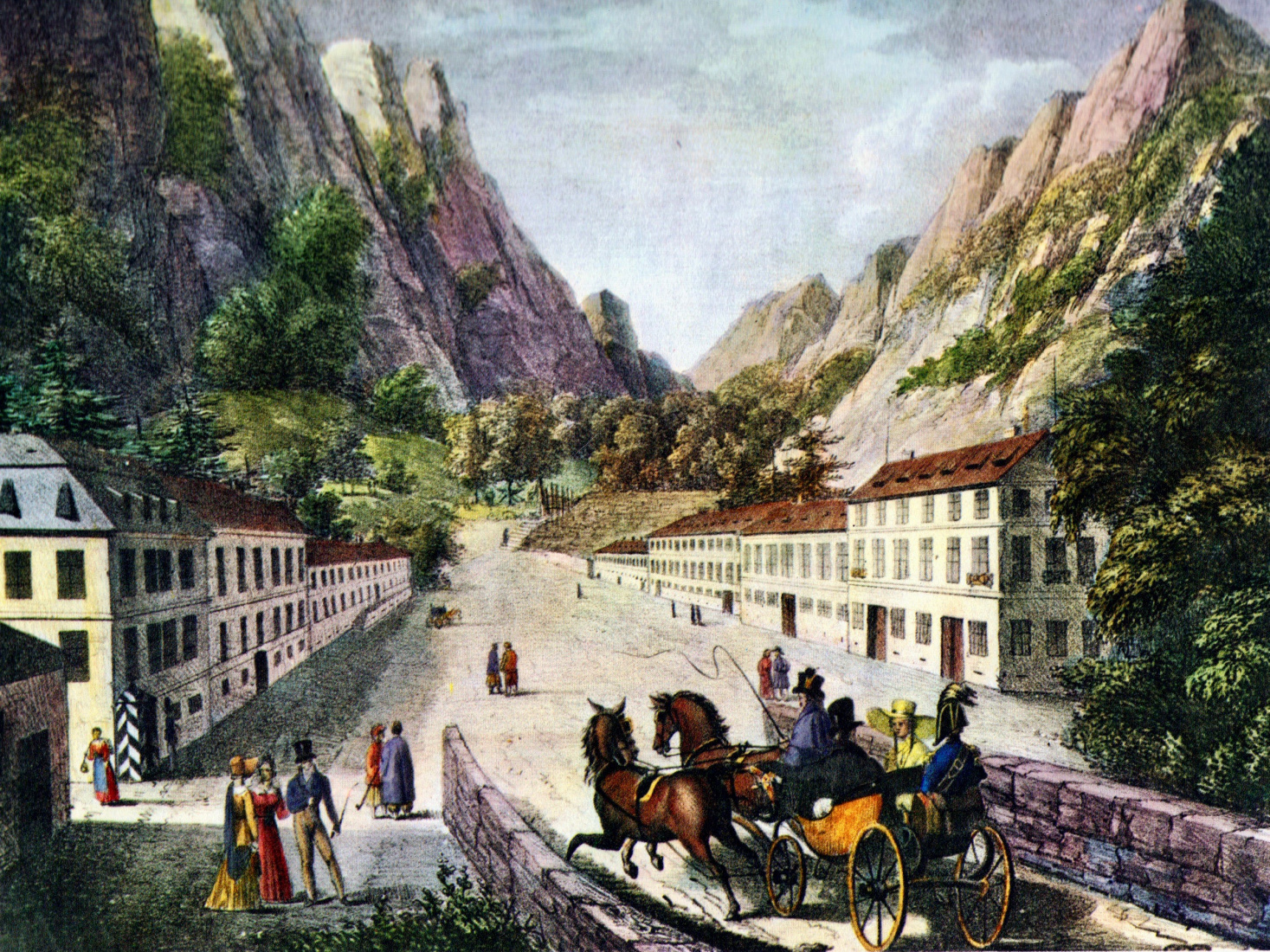 I first became acquainted with the once-illustrious Baths of Hercules not from visiting but through the writing of the late, great English travel author Patrick Leigh Fermor and his book, “Between the Woods and the Water.”

The book is the second (and best) part of a trilogy that documents a trip the author took as a young man in 1933 and ‘34, traveling on foot (and horseback) all the way from the Hook of Holland to Constantinople. The “Between the Woods and the Water” segment starts in the former Czechoslovakia and traces Fermor’s journey south and east through Hungary and Romania. The book ends near the Danube, where the river flows between Romania and Serbia.

Fermor’s book is amazing in several respects. First is the fact the author only finished the book in the 1980s, more than 50 years after he took the trip. He constructed the narrative and his copious description wholly from notes and memory. Second is the quality of the description itself: dense, poetic and hypnotic. He stretches the reader’s vocabulary in ways most modern writers wouldn’t dare. The result is a read that’s at times difficult but immensely satisfying.

Here's his description of the Baths of Hercules in 1933:

“Suddenly, and without warning, an ornate and incongruous watering place called the Baths of Hercules rose from the depths of the wild valley. The fin-de-siècle stucco might have come straight out of an icing gun; there were terracotta balustrades, egg-shaped cupolas and glimpses through glass double-doors of hydrangeas banked up on ornate staircases … an echo of the Austro-Hungarian Empire at its farthest edge.” 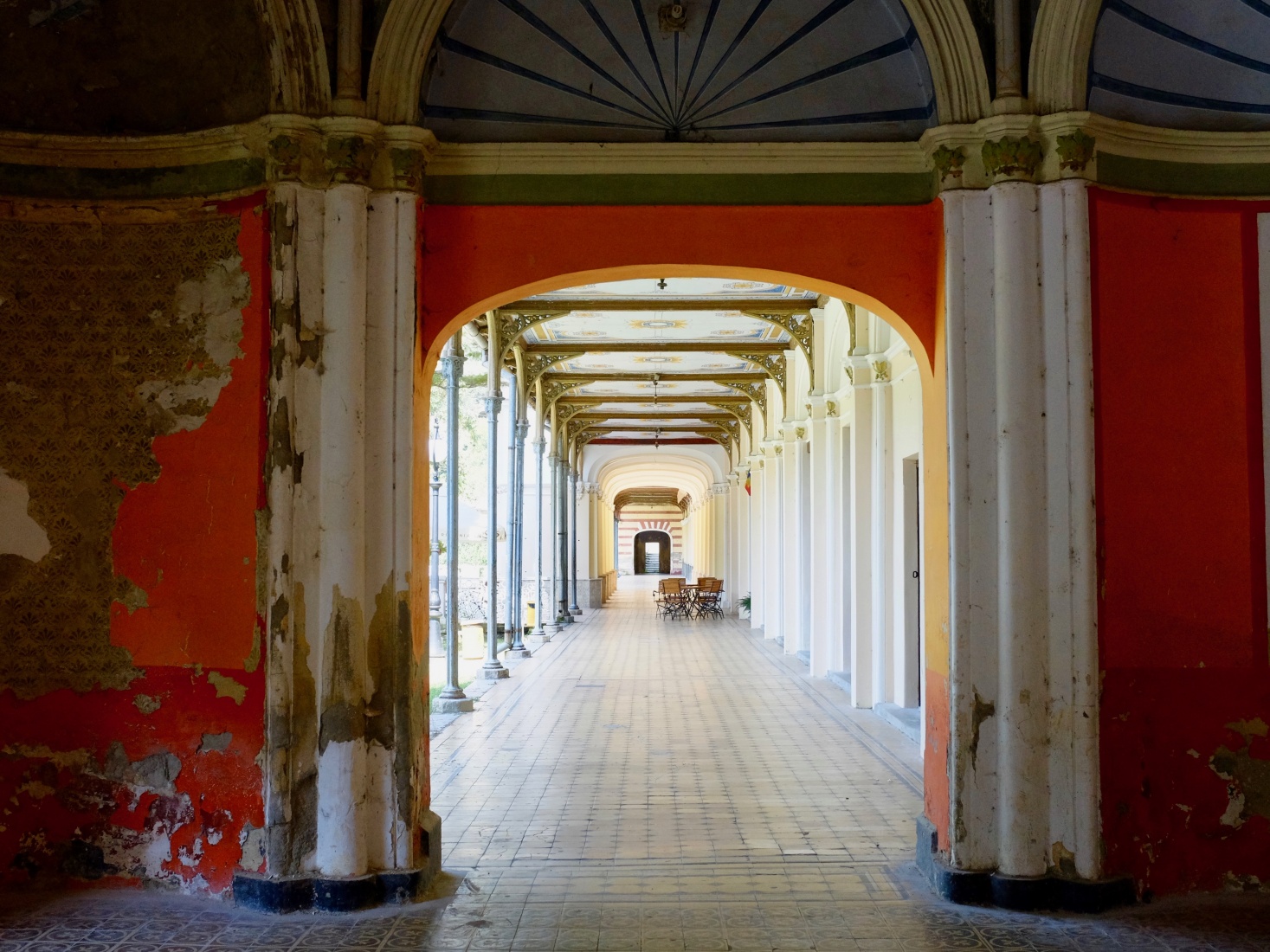 Neo-Baroque arcades lead around the exterior of the former casino. Photo by Mark Baker. 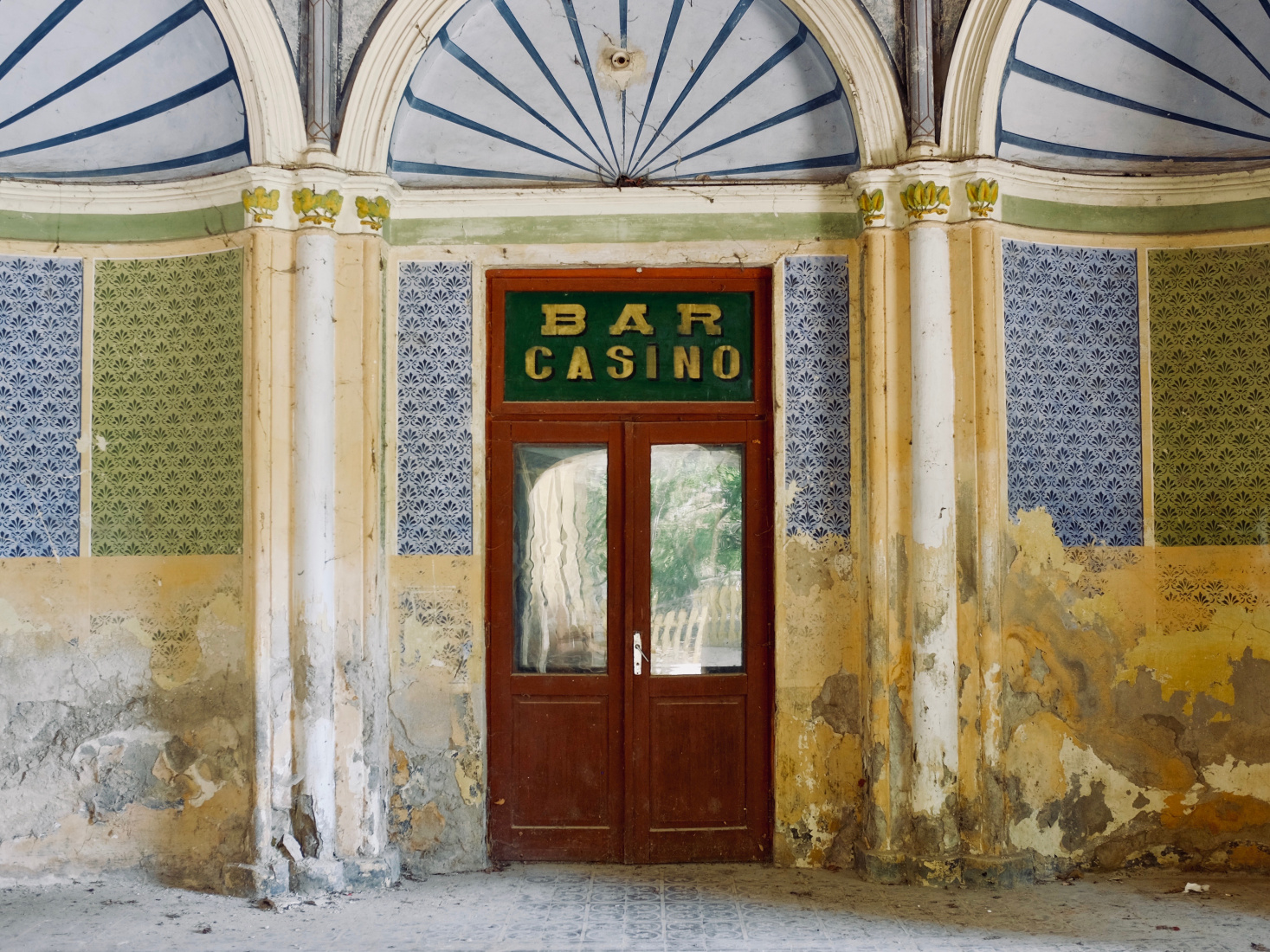 One of the crumbling doorways into the casino. The building itself is closed. Photo by Mark Baker. 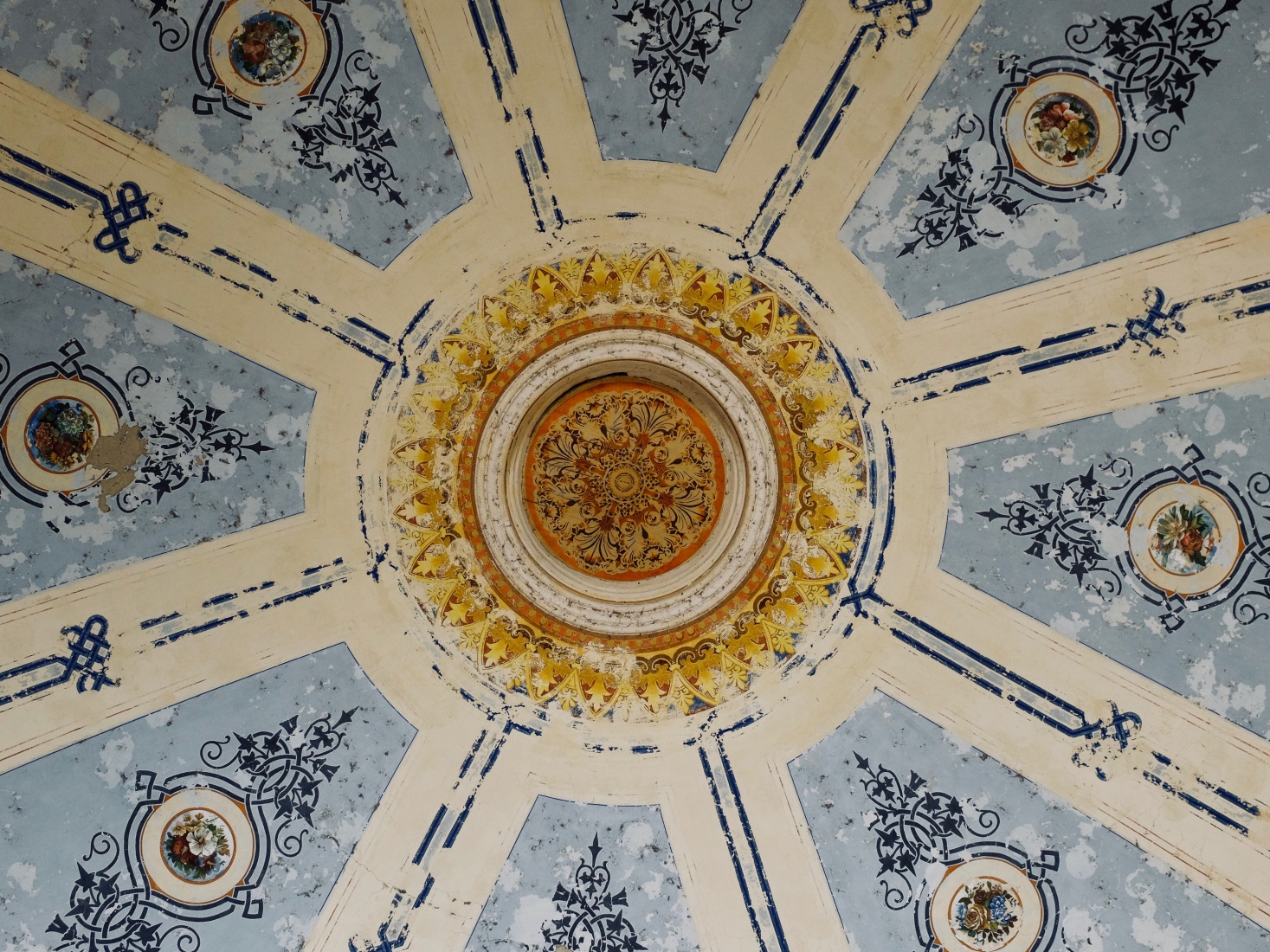 The ornate ceiling outside of the historic casino building. Photo by Mark Baker. 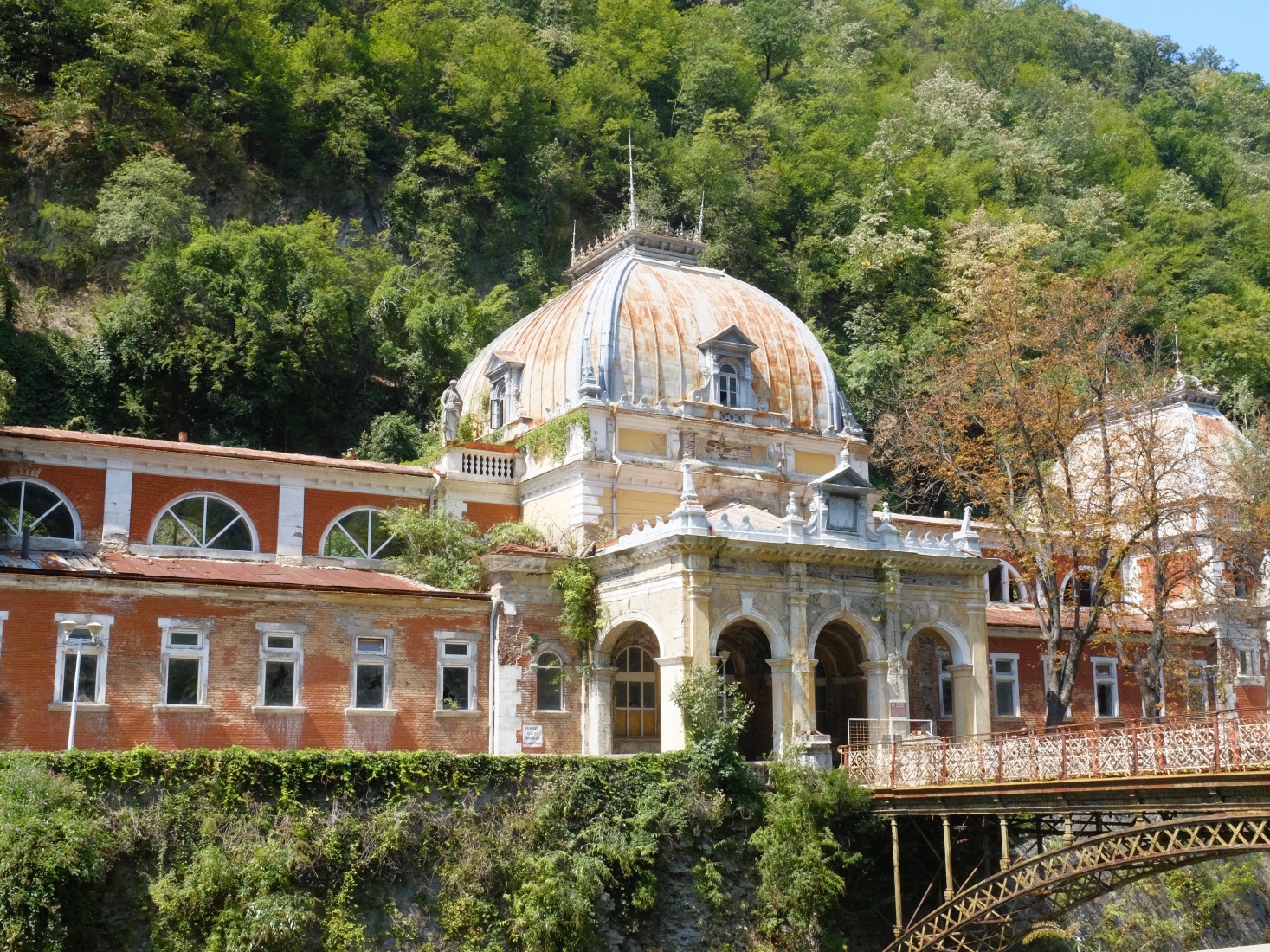 Another view of the Neptune Baths, the grandest of the old spa buildings at the Baths of Hercules. Might this be one of those vaunted cupolas? Photo by Mark Baker.

The Baths of Hercules must have been an amazing place. The hot springs trace their roots to the Romans in the second century AD, after they’d finally succeeded in bridging the Danube (in 105 AD) at the modern-day port city of Drobeta-Turnu Severin. From the river, Roman armies advanced north to conquer the indigenous Dacian tribes and rule over this part of modern-day Romania for around 170 years.

It was the Romans who first gave the baths the name of "Hercules" (Ad aquas Herculi sacras). In the intervening centuries, the baths were lost to time and only rediscovered by the Austrians in the early 1700s. The first excavations at the site uncovered six Roman statues of Hercules, and a bronze replica of one of those stands at the center of the spa even now.

The baths flourished under Austrian-Habsburg rule in the 19th century. Emperor Franz Joseph visited in 1852 and proclaimed the baths to be the most beautiful on the European continent. His wife, the Empress Elisabeth (Sisi), was a big fan and preferred this resort to the many other spas within the empire at the time.

By the time Fermor rolled into town in the 1930s, the baths were still going strong. Following the defeat of Austria-Hungary in World War I, the region had passed from Hungarian to Romanian control, though Fermor describes a still-surviving ethnic tapestry of well-to-do Hungarians, Romanians, Germans and Slavs, collectively enjoying the decadence of the casinos, the baths, the drinks and the dance.

During the Ceaușescu years, after World War II, the baths endured but the decadence did not. Communists tended to be ideologically uncomfortable with the notion of wealthy people “taking the waters.” The Baths of Hercules were opened up to mass tourism and given a kind of working-class, medicinal cast. Big hotels and recreational cooperatives were built up around the central spa, but the historic core remained intact.

It was only after 1989 and the fall of Communism that the whole thing began to unravel. 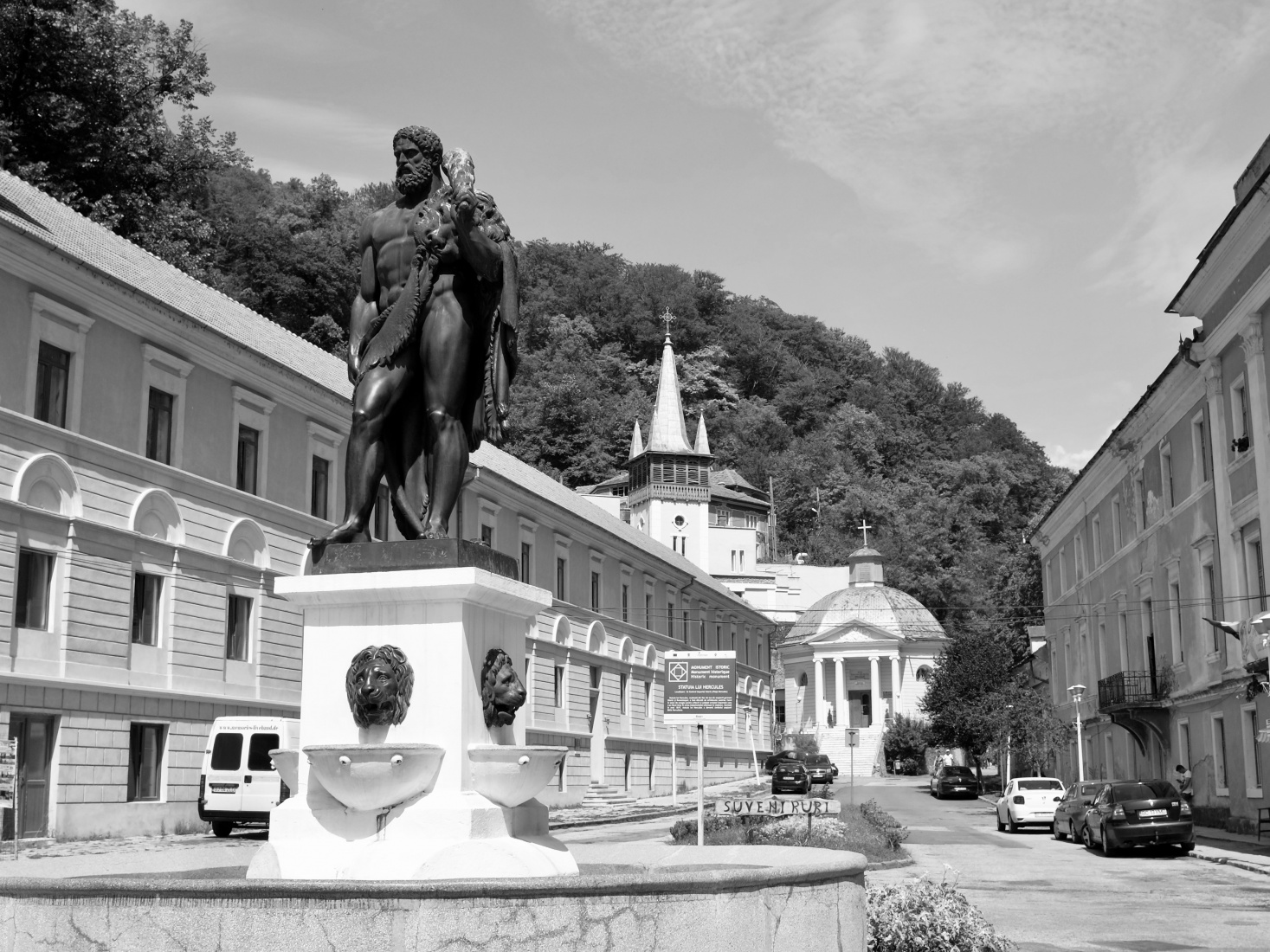 This bronze statue of Hercules dates from the 19th century and is based on one of the original six statues from the Romans that were found on the site in the 18th century. Photo by Mark Baker. 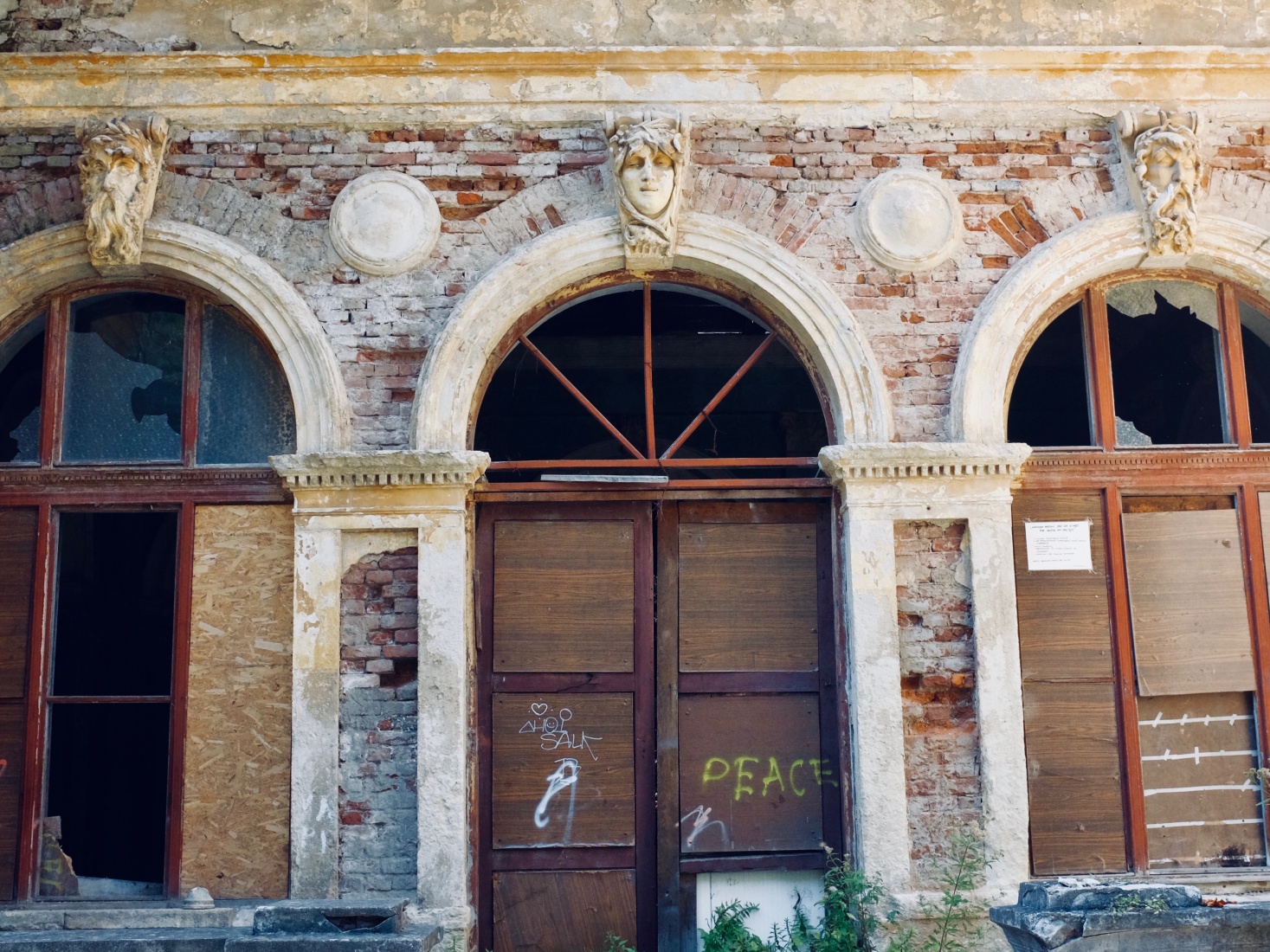 The entryway to one of the once-grand historic buildings along the main road in the Baths of Hercules. Photo by Mark Baker. 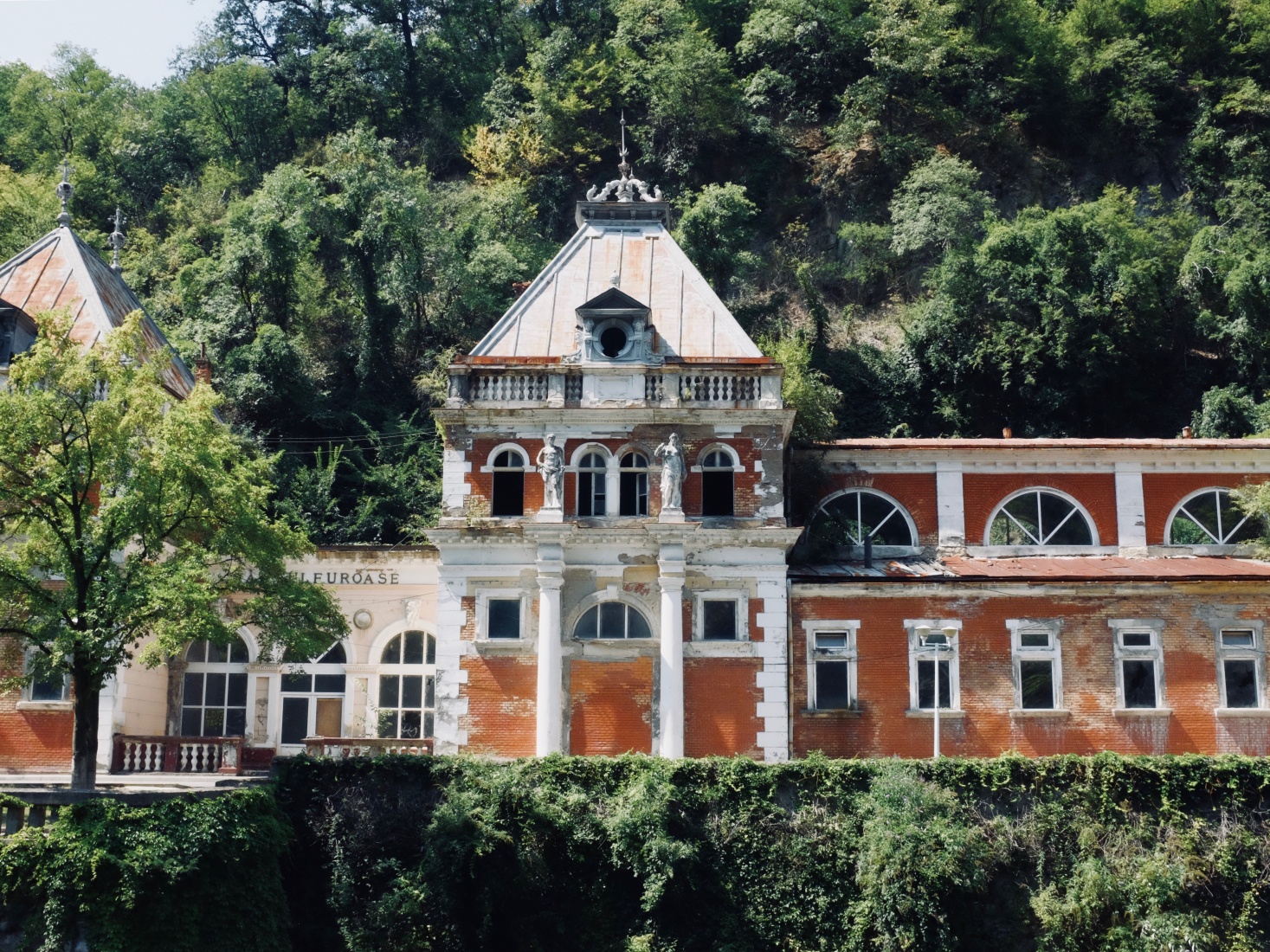 Statues look down on the Neptune Bath complex. Photo by Mark Baker. 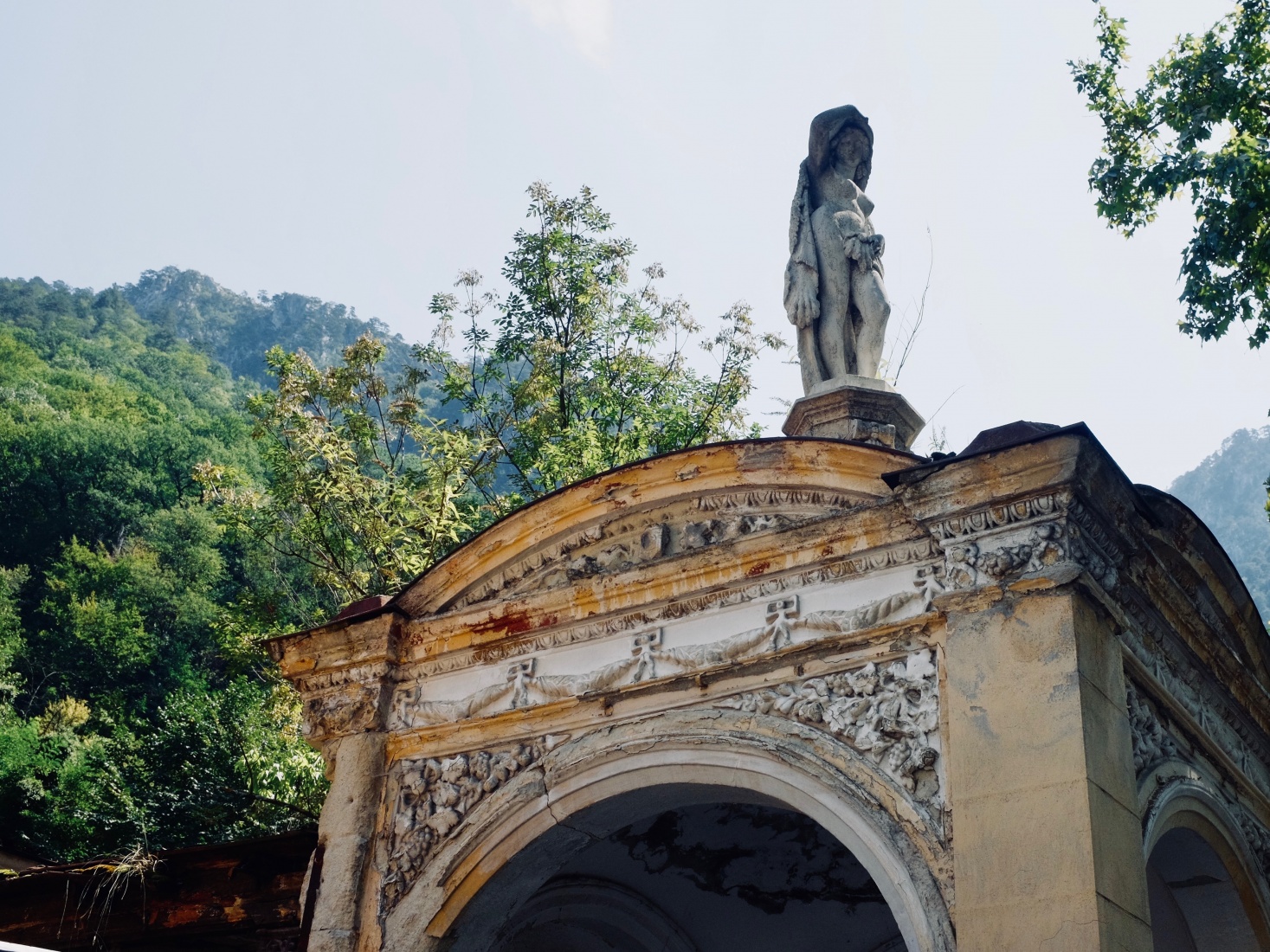 It broke my heart to see the condition that some of the buildings are in. Photo by Mark Baker.

I first visited the Baths of Hercules in 2012 on assignment for Lonely Planet. Armed with Fermor’s book, I was expecting to find illustrious terracotta balustrades and egg-shaped cupolas, but instead what I saw were broken windows, chipped statues, rusting pipes, and formerly magnificent neo-baroque buildings sliding into the Cerna River that runs through the resort. My strongest memory from that trip is of flies and stench. I was witnessing the decomposition first-hand.

The story of what happened to the Baths of Hercules is too long and complicated to tell here, and I’m not sure I fully understand it myself. From what I gather reading the local news reports, it involves the usual suspects of corrupt local officials willing to make deals and take payoffs from unscrupulous businessmen whose only interest, it appears, is to loot and extort.

The result is a protracted courtroom battle over the rights to the spa -- and the obvious irony to anyone visiting that under Romania’s twisted system of gangster capitalism, it somehow makes more sense to let history rot than to restore the buildings to their former splendor.

On this most recent trip in 2018, I found some hopeful signs. The air of despair had dissipated somewhat and some of the older buildings had received a fresh coat of paint. Here and there, I saw scaffolding (but no workers). It looks as if, slowly, the long process of renovation has begun.

(After I posted this story, a Romanian friend sent me a link to another story by a Romanian architectural student, Oana Chirila, whose own writing and photography have already spurred some tentative efforts, so far, toward renovating the baths. Find her story here.)

Work has apparently not yet started on restoring the spa’s most glorious building, the old Neptune Baths (also called the Austrian Empire Baths), which stand across the river from the main road. The historic iron bridge that links the baths to the road remains closed as it’s too dangerous to cross. 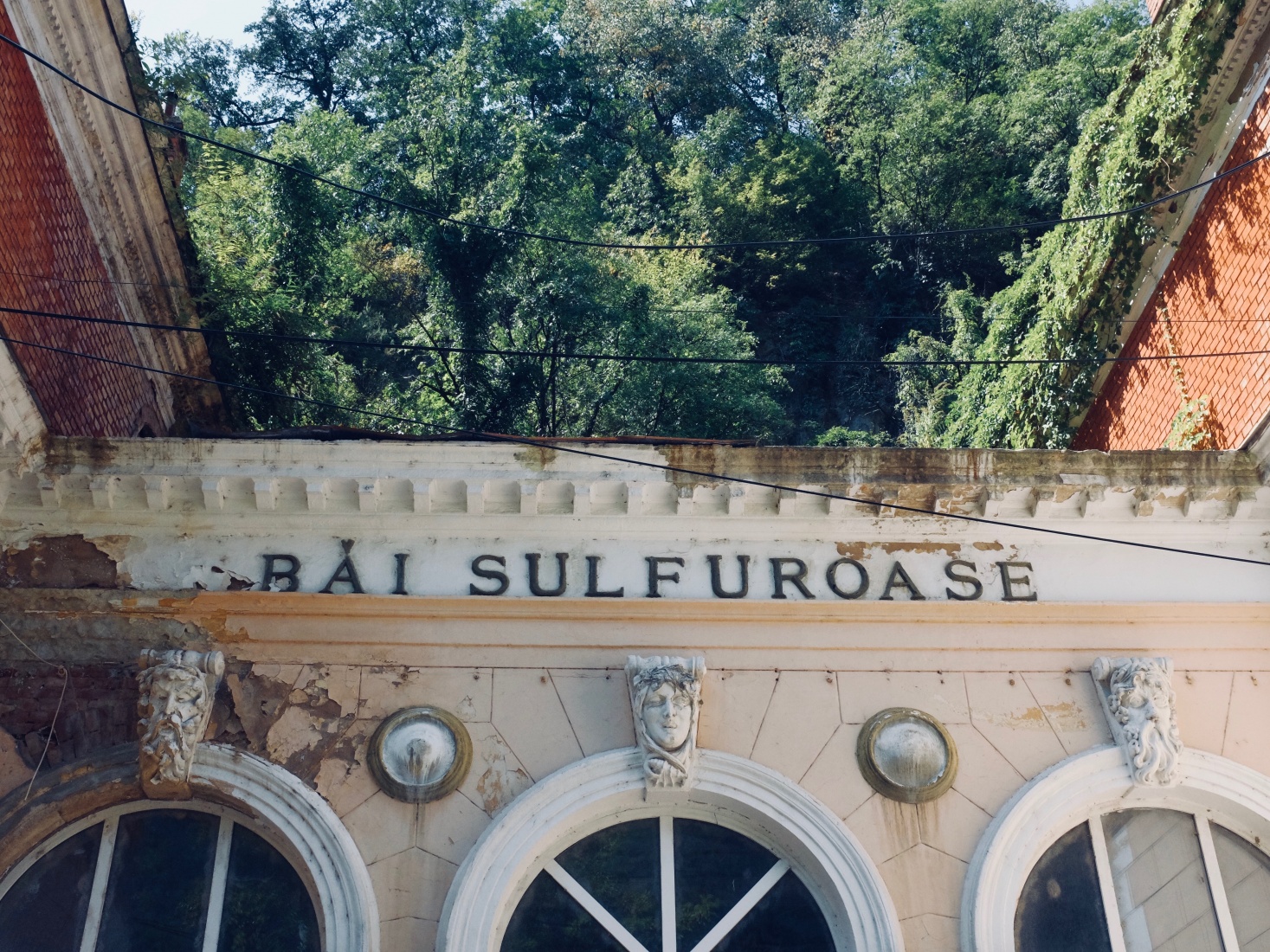 The aging entry into the Sulphurous Baths at the Baths of Hercules. Photo by Mark Baker. 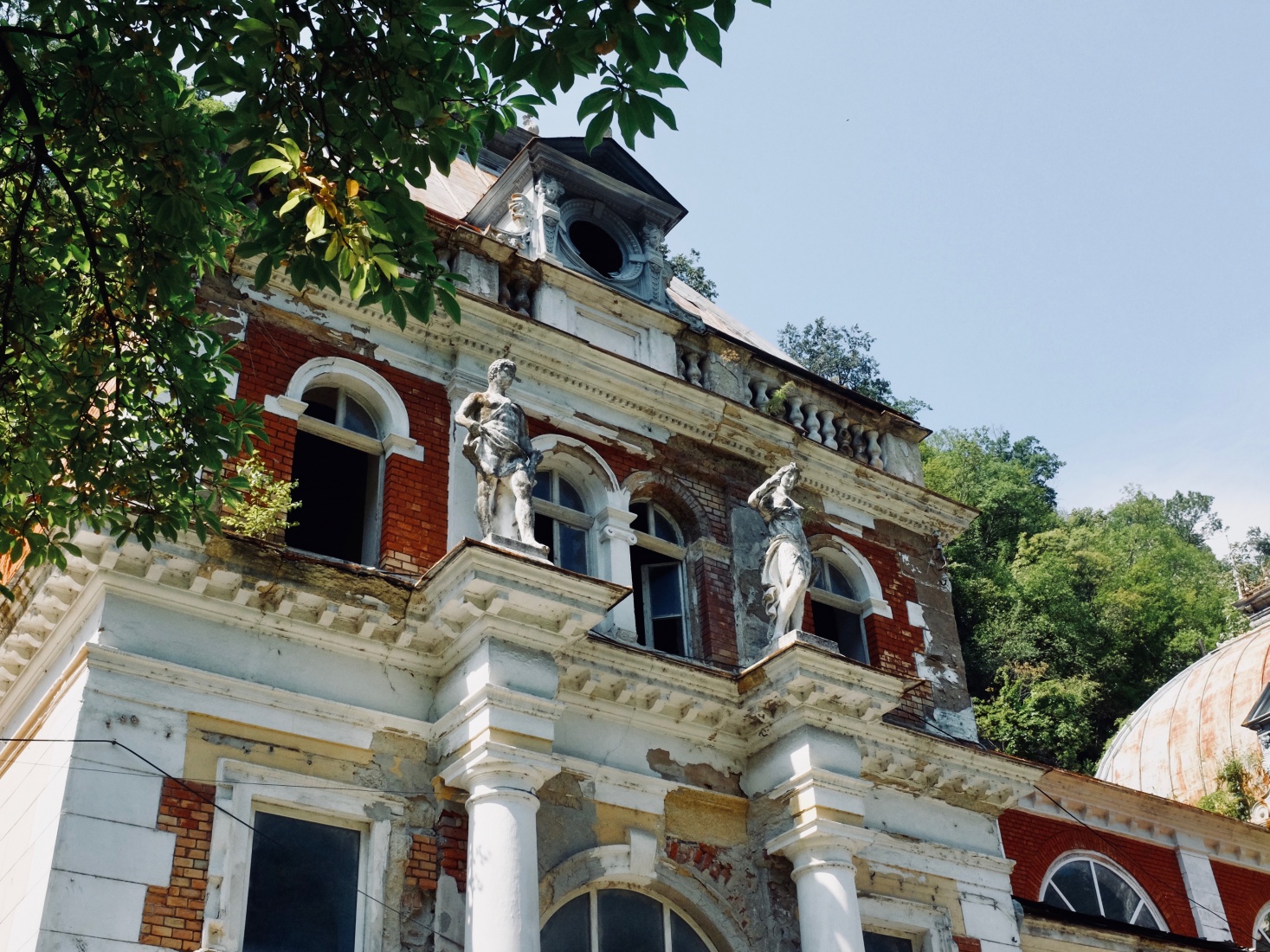 It's easy to picture these statues looking down as Emperor Franz Joseph's carriage came rolling into town in 1852. Photo by Mark Baker. 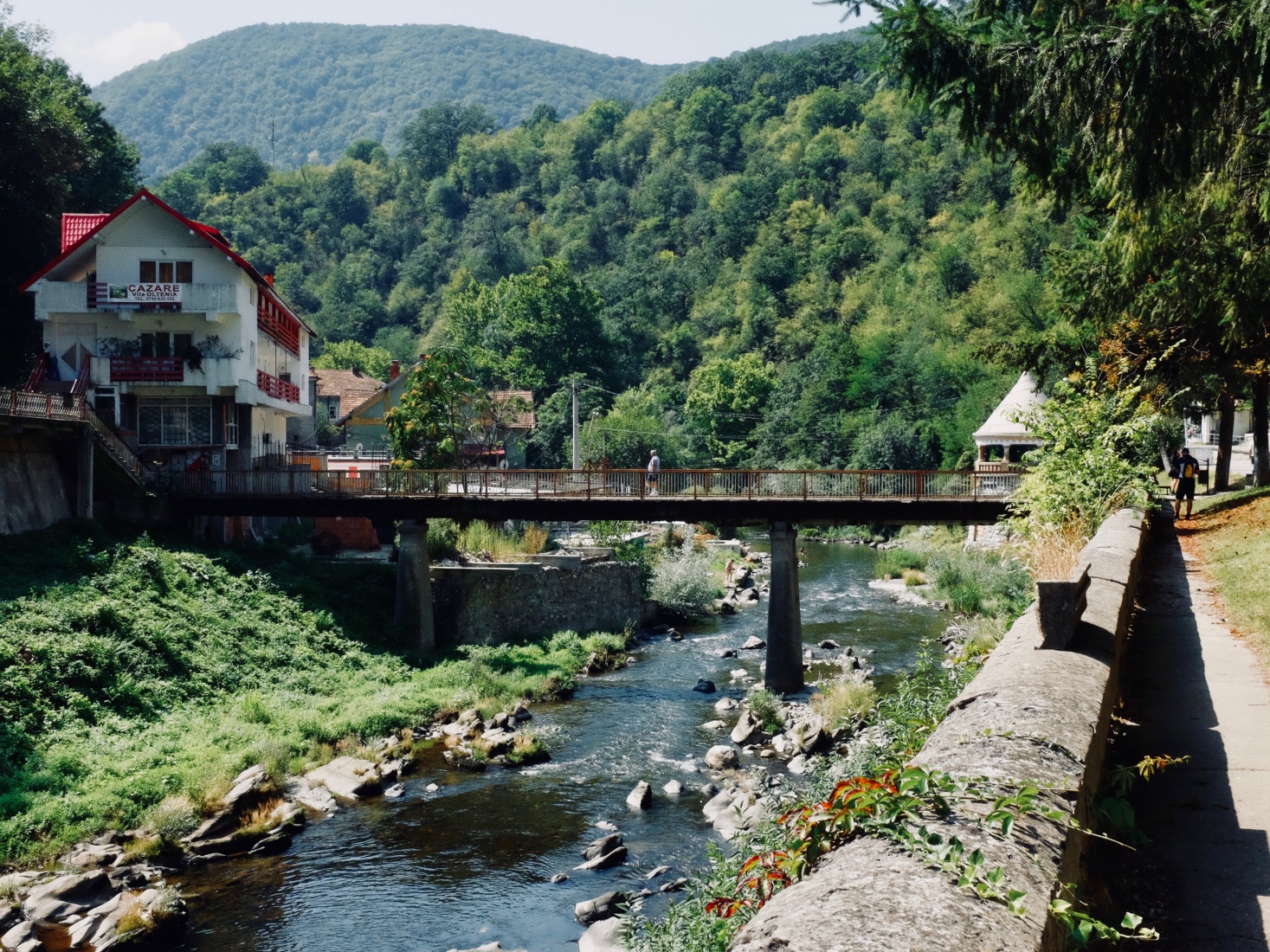 A view toward the Cerna River as it flows through the historic center of the Hercules Baths. Photo by Mark Baker. 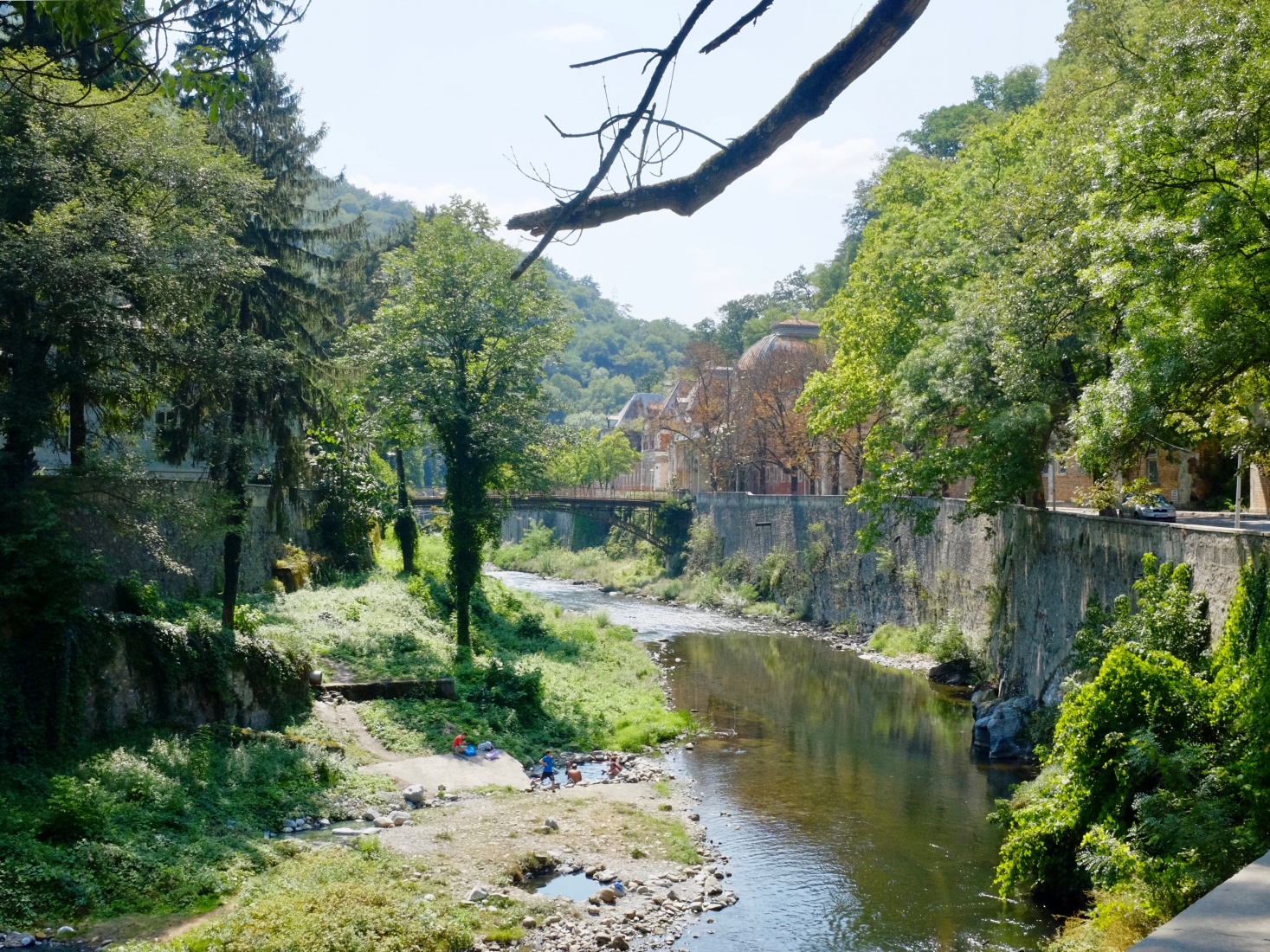 The baths lie in the valley of the beautiful Cerna River, a tributary of the Danube. Photo by Mark Baker.

As I travel around Romania on this trip, the country finds itself once again in the throes of political upheaval. Mass anti-government protests in Bucharest earlier this month ended in tear gas and anger, and it’s not clear what will happen next.

Romanians are mad at their rulers for many reasons, including the fact their country has not made more significant economic progress since 1989 and that people continue to leave the country in droves for better opportunities abroad in Italy, Spain, and the UK. But if there’s one issue that unites the protesters above all others it would be the continued widespread corruption at all levels of business and government.

It’s possible the story of the Baths of Hercules doesn’t quite fit this corruption narrative perfectly. As I wrote above, I don’t know all the details behind why the baths have been allowed to fall into ruin. It would be hard, though, to find a more potent symbol for what ails this country. At the risk of ending on a bad pun, the task of rebuilding the baths will be one, well, befitting of a guy like Hercules.

Posted in On The Road and tagged Fermor, Hercules, Lonely Planet, Romania, Travel.