Ever since moving to Prague in the early 1990s, I've been entranced by the city's trams. You can learn a lot about a city from how residents move from place to place. New York’s aging subways, for example, say that New Yorkers are a resilient bunch willing to tolerate nearly any indignity to live there. London’s tubes tell much the same story about Londoners. LA’s freeways are all about personal freedom and the individual. By contrast, Tokyo’s overcrowded trains can be depersonalizing, in keeping with the notion that it’s the society, not the individual, that matters. Here's my own take on trams and what they mean to Prague. 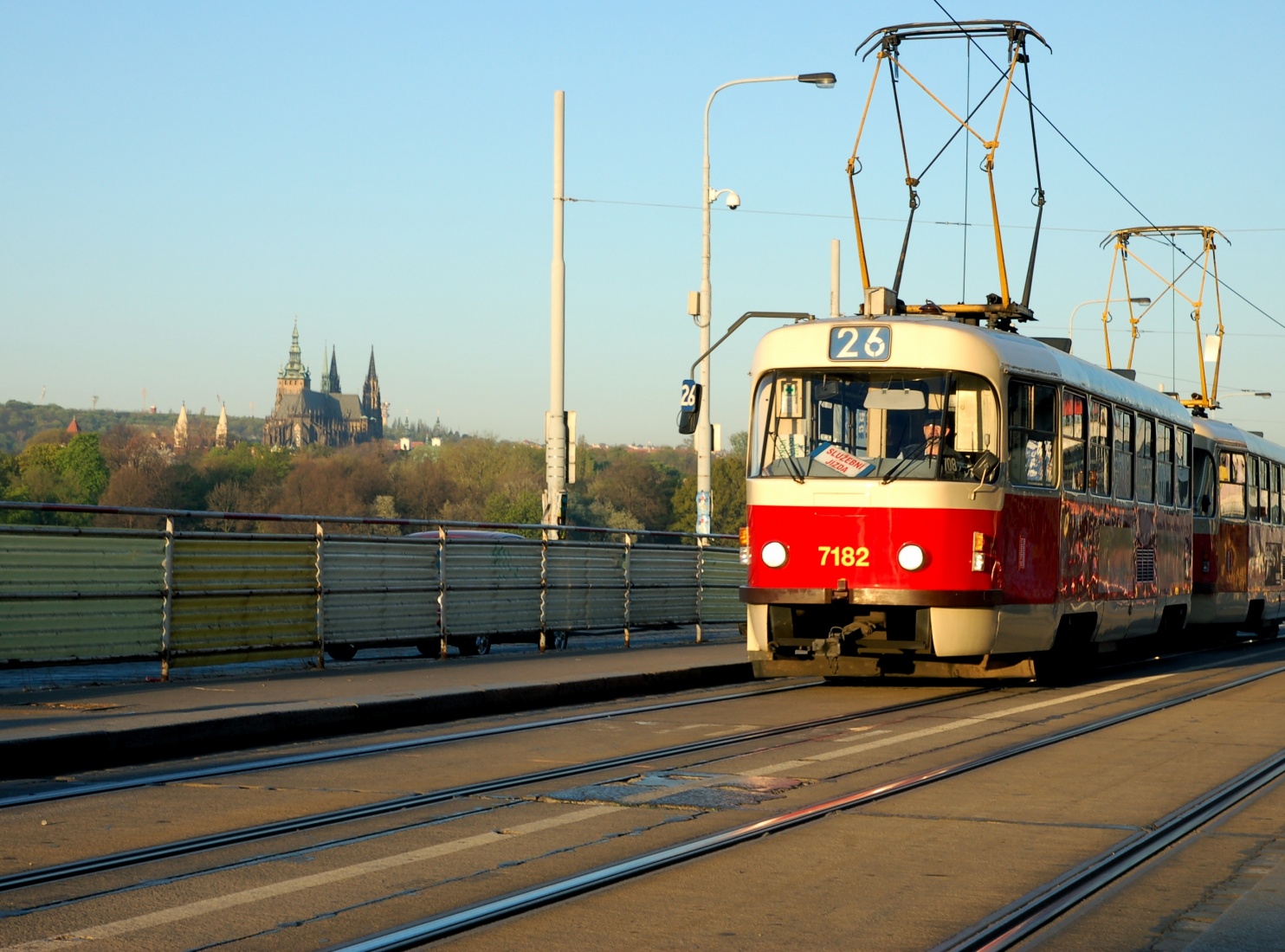 The trusty, long-haul no. 26 chugs along the fringe of Letná Park, with Prague Castle in the background. Photo by Mark Baker. 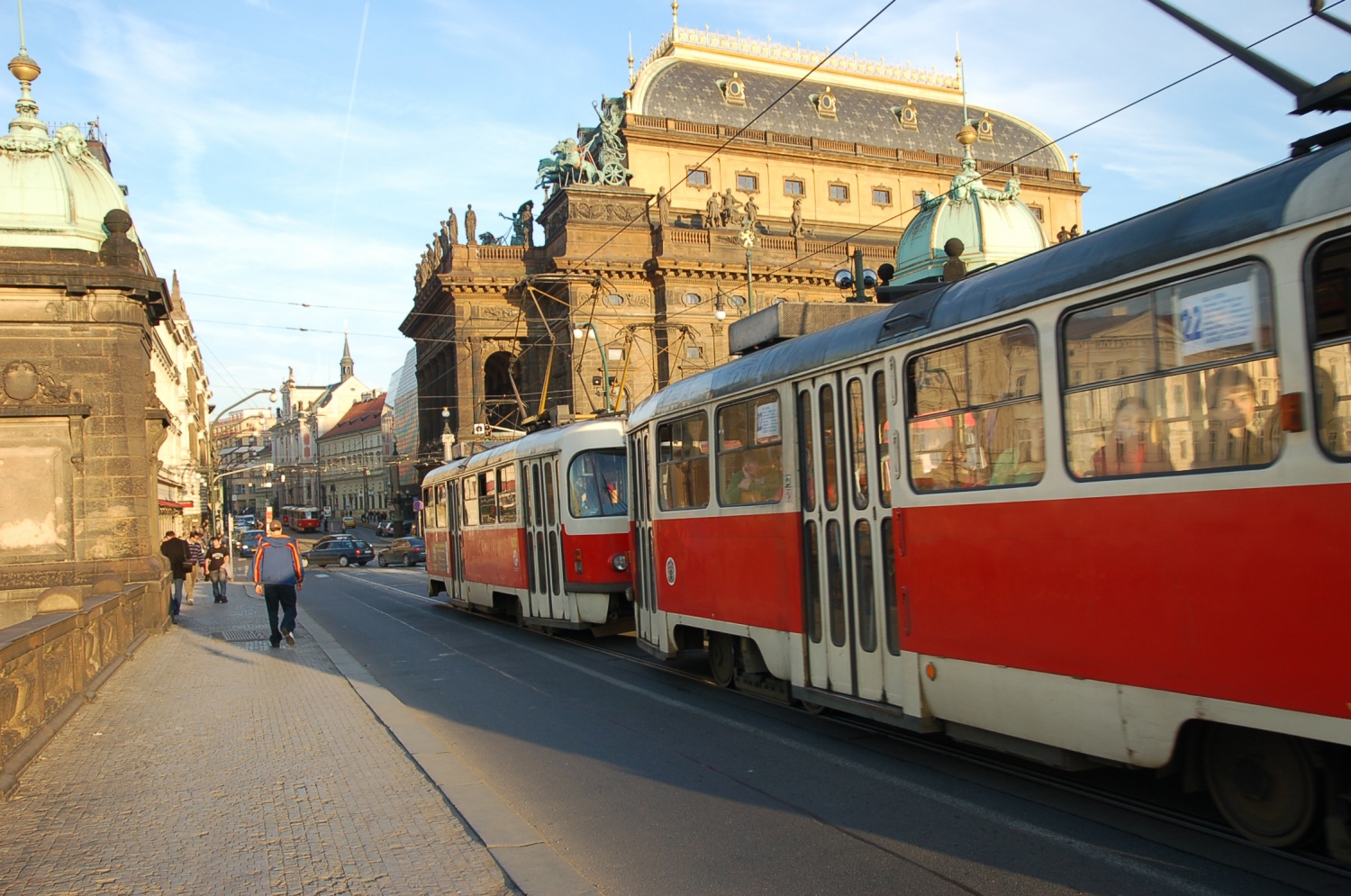 While Prague has a fine metro and an extensive bus network, it’s the tram – or tramvaj in Czech – that sets the transportation tone. Any visitor to the city will be familiar with the sight of these mainly (though not always) red- and cream-colored “whales on rails,” gliding smoothly over the cobblestones and pushing their girth through impossibly narrow streets that were originally built to accommodate horses, but are now packed with cars, trucks, buses, and an endless stream of streetcars.

Tram no. 22 is even a guidebook staple. For the price of a 90-minute ticket, 32 Czech crowns (a little more than a euro and change), you can ride all the way from Prague Castle, down through the picturesque Lesser Quarter, across the Vltava River (with stunning views of Charles Bridge), and practically to where the gates of the Old Town once stood. Stay on the line and you’re transported in minutes through the prosperous suburb of Vinohrady, and out to the Communist-era, high-rise housing projects at the end of the line. You may even have some time left on your ticket to return to the center free of charge.

But what do the trams say about Prague and Praguers?

That’s a tricky question, especially for me, a resident expat, but one I set out to try to answer a while back by spending the entire day on the tram. My goal was to navigate all 22 or so of the daytime lines and 142 kms (more than 500km in total length) of track from sun-up to sundown. In the end I didn’t finish (there were too many line spurs to cover), but I did gain some valuable insight into the city and the people who live here. 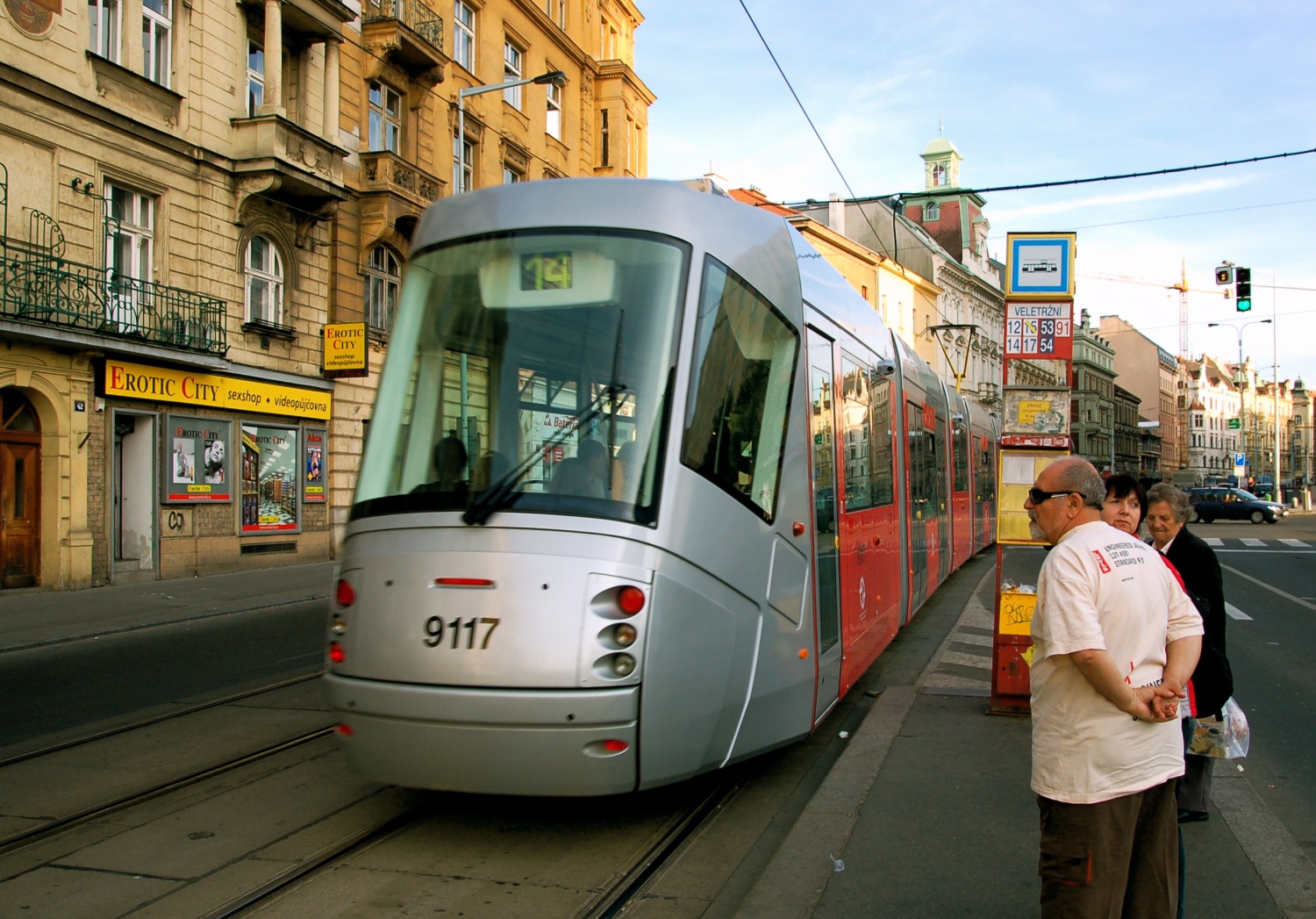 The Porsche-designed newer trams still look out of place in some older Prague neighborhoods. Photo by Mark Baker. 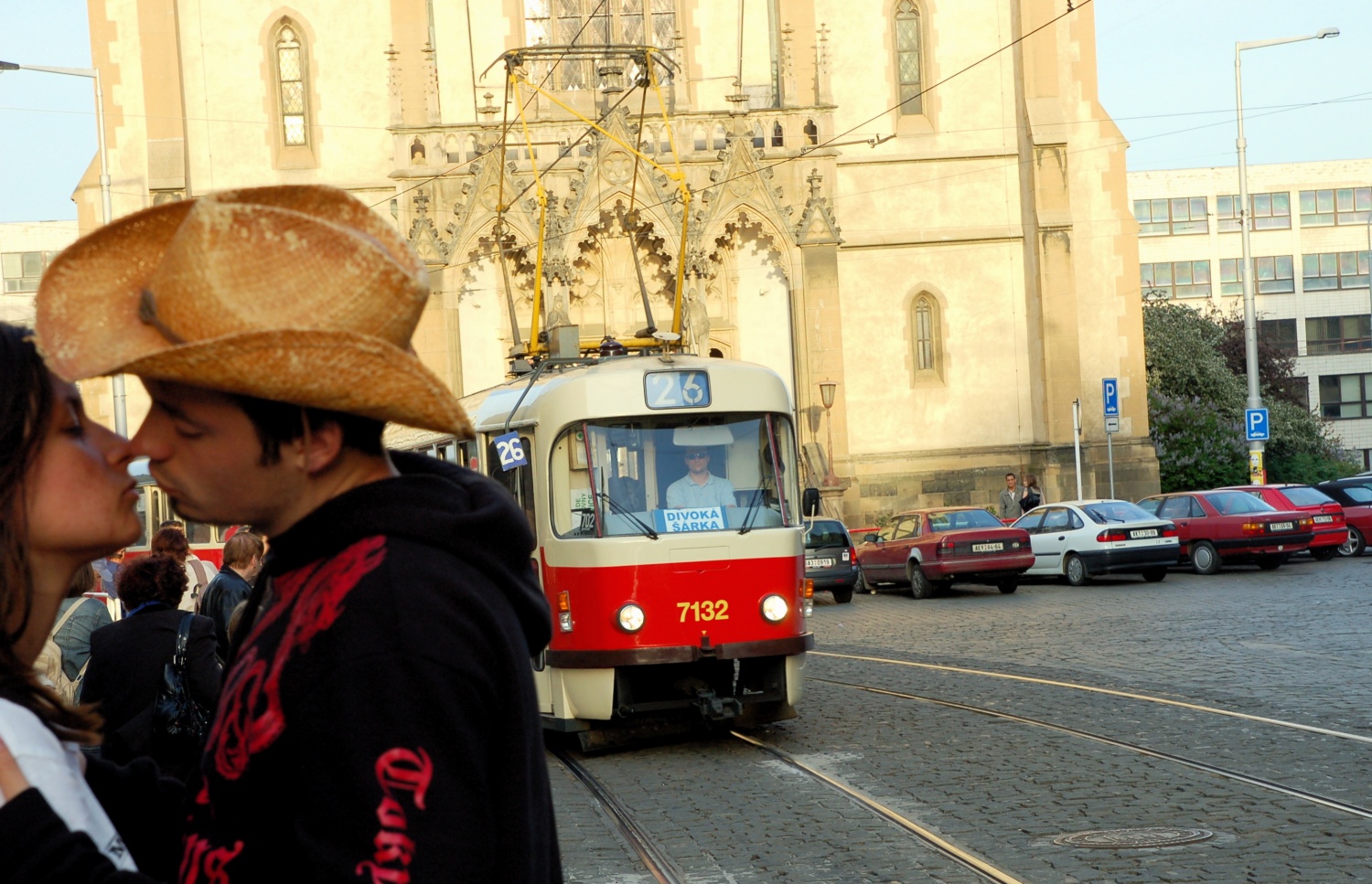 I’m apparently not the only one who sees a bit of romance on Prague’s trams. Photo by Mark Baker. 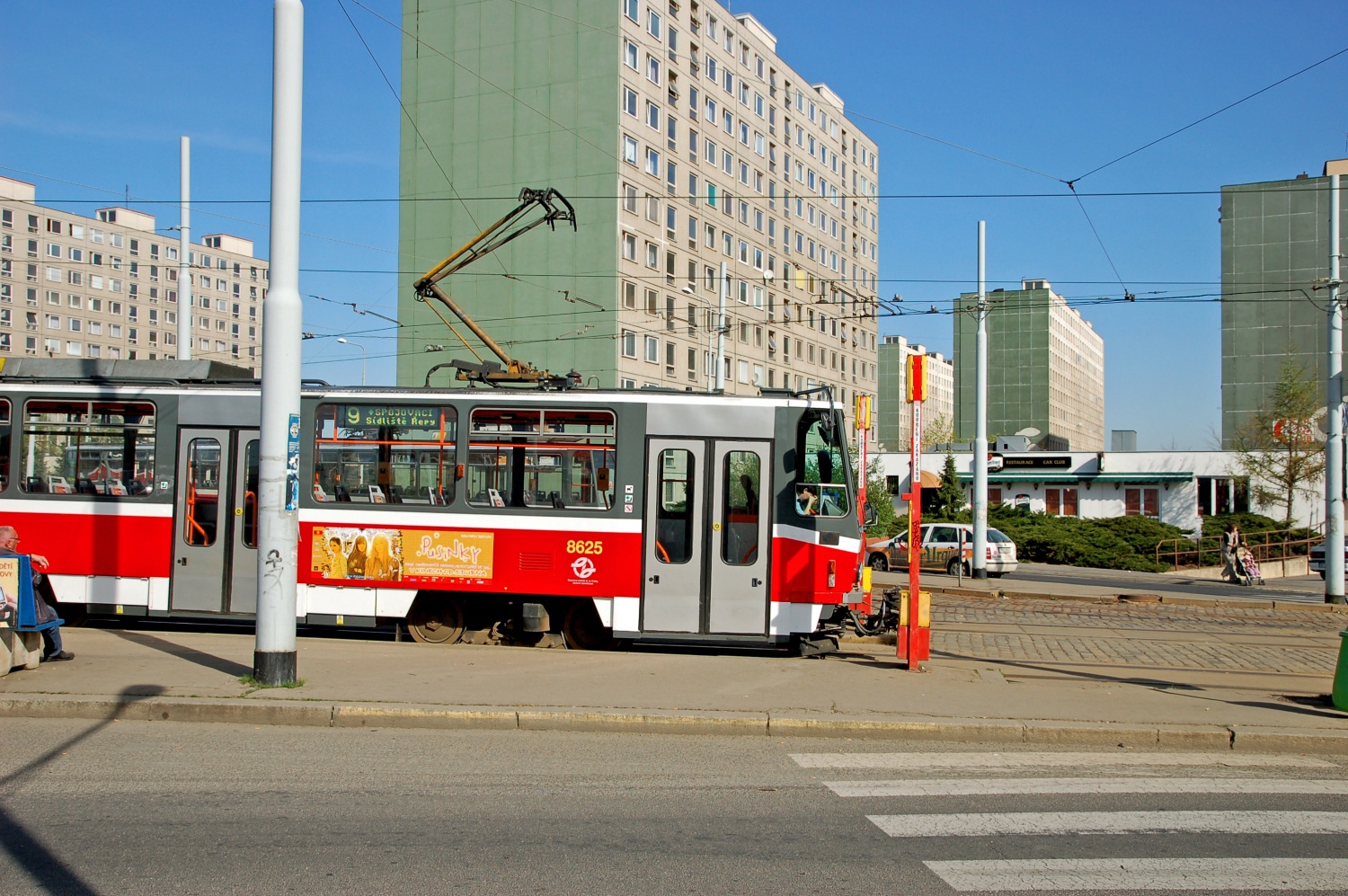 A futuristic streetscape in the outlying Prague suburb of Řepy. Photo by Mark Baker.

Trams remain a repository of civility that long ago vanished from many other aspects of everyday life. Visitors to Prague, who normally interact mostly with waiters and shop-clerks, sometimes come away with an impression of Czechs as gruff or even rude. Maybe that’s a legacy of 40 years of Communist rule or a reaction to the enormous influx of tourists since the 1989 Velvet Revolution. But step onto a tram and it’s like going back 50 years in time.

It’s still considered, for example, the height of ill manners on a crowded tramcar for a man to fail to offer his seat to women of a certain age. This societal nicety curiously doesn’t apply as strictly to the city’s newer and far-less-mannered metro. The calculation of when and whether to offer a seat is not always easy in practice. It’s clear if a woman is elderly, enfeebled, or with child in arms, but what if she’s simply older and otherwise able-bodied? Too rapid a rise risks handing her a backhanded compliment; too slow and you risk eliciting the wrath of the rest of the car.

Young women, too, are expected to yield their seats to older men, but an added dose of sensitivity is required. Male egos, after all, are notoriously fragile. A former work colleague of mine here – a man of about 60 and in pretty good shape – once told me how depressed he became after an attractive young woman, on seeing him standing there, quickly leapt out of her seat and offered it to him. He told me he’d originally interpreted her smile as flirtatious interest – certainly not unknown on Prague’s trams – and then quickly realized she was probably thinking of her father or grandfather.

Men are also expected to learn the delicate art of assisting young mothers with babies in on- and off-loading their baby carriages. Though some of the newer trams stand fairly low to the ground, the older models are a good three steep steps up and in (or down and out). Once a mother has locked eyes on you as the honorary carriage-lifter, there’s no polite way of refusing the request. To properly offload a pram, wait for the tram to come to a stop, precede the carriage down the steps, take firm hold of the front axle, and deliver the baby gently to the ground. Such is the responsibility demanded of strangers on a tram.

Prague’s trams are generally quiet and there’s not much banter among the riders. This changes, of course, after 11 p.m. when the city’s day fleet retires to the garages and special night trams are brought into service to ferry revelers from pubs in the center to housing projects on the outskirts. The mood at 3 or 4 a.m. can get raucous, and night trams are often little more than pubs on wheels. There are few laws against carrying open containers of alcohol (although some restrictions apply to the city center). Unlike in New York, there’s no need to swill from a paper bag. 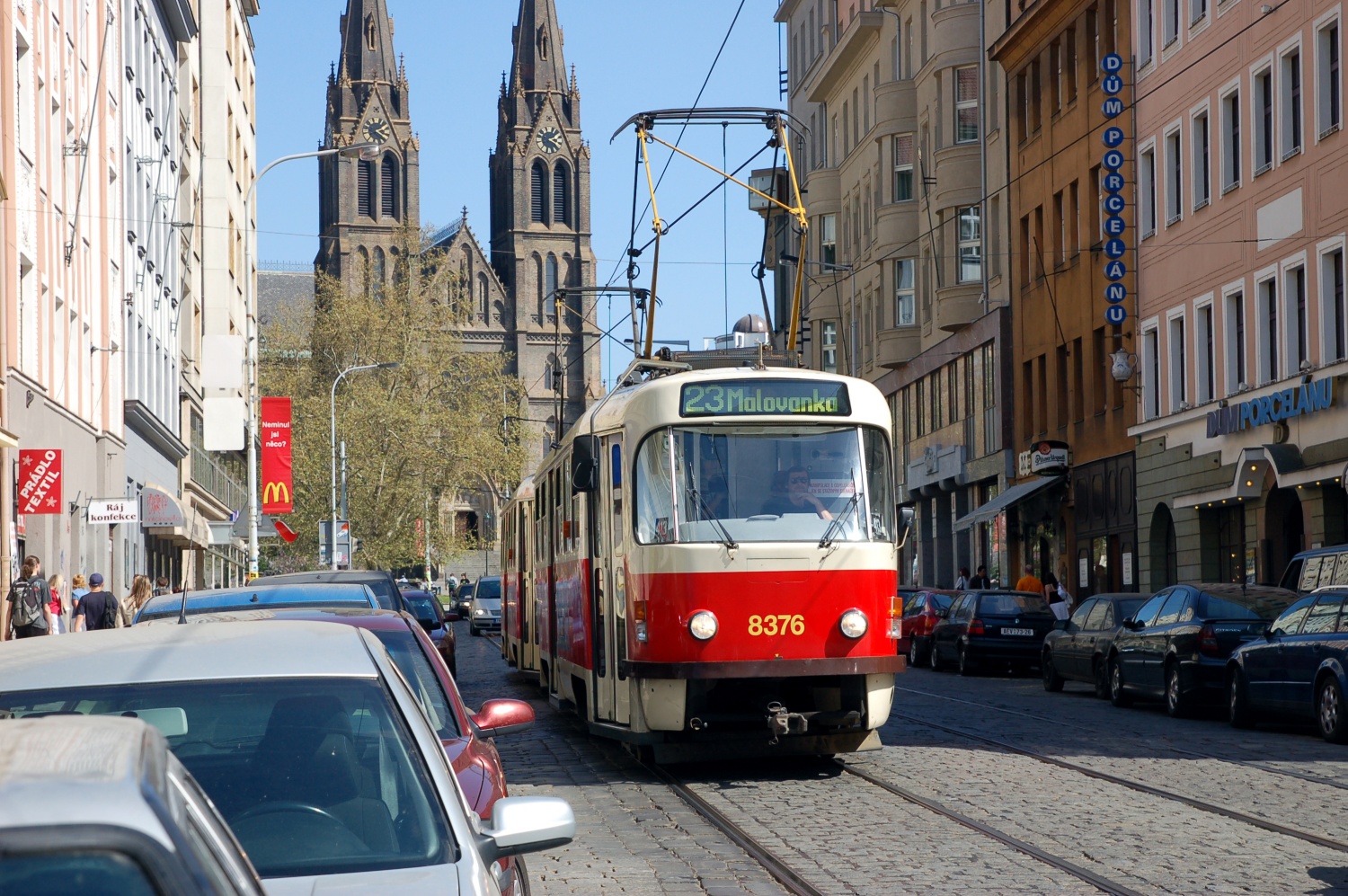 The tourist-friendly no. 23 trams plies the rails in upscale Vinohrady. Photo by Mark Baker. 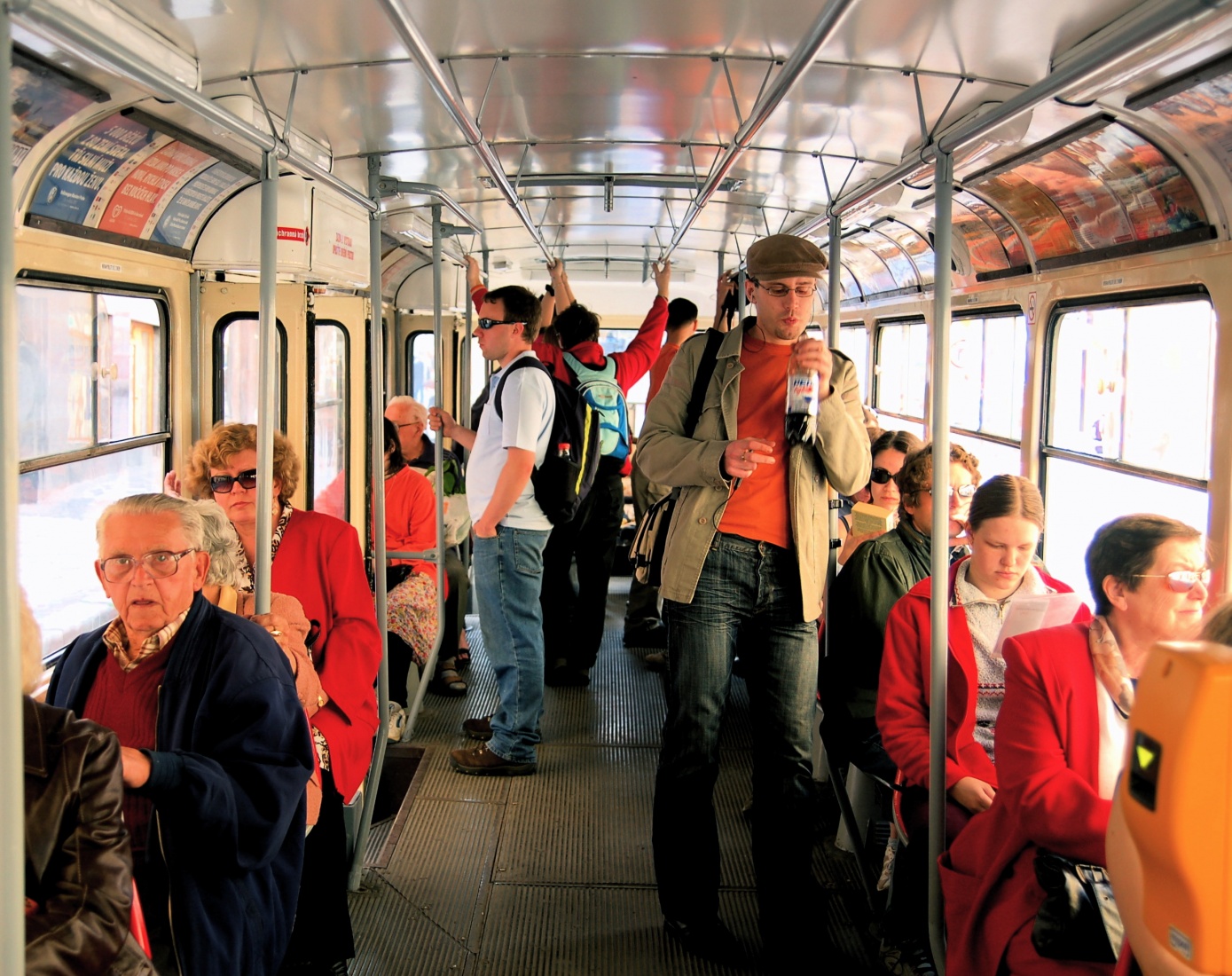 A journey on the tram is a slice of daily Prague life. Photo by Mark Baker. 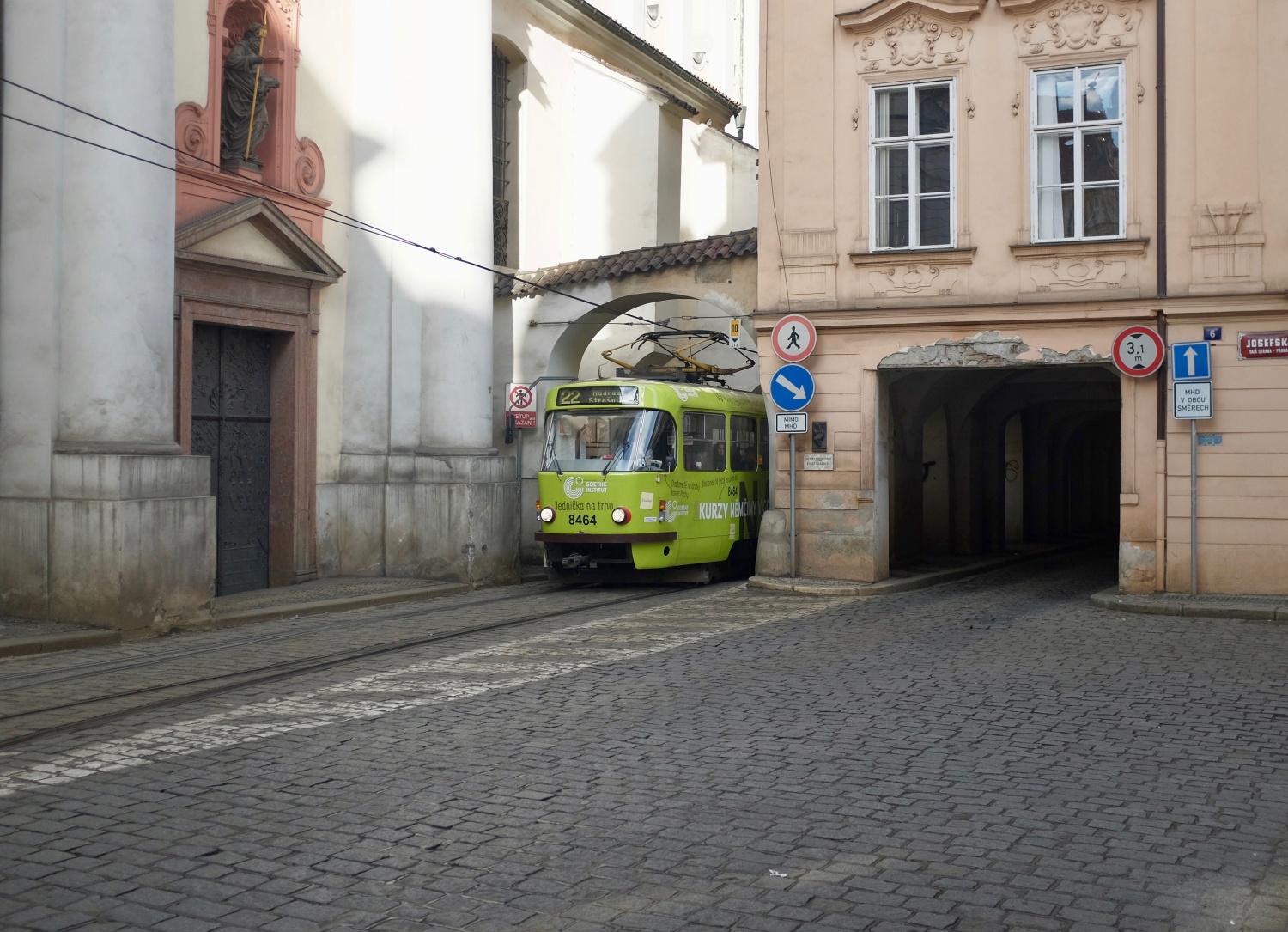 A rare green tram (covered by an ad) emerges from a tunnel in Malá Strana. Photo by Mark Baker. 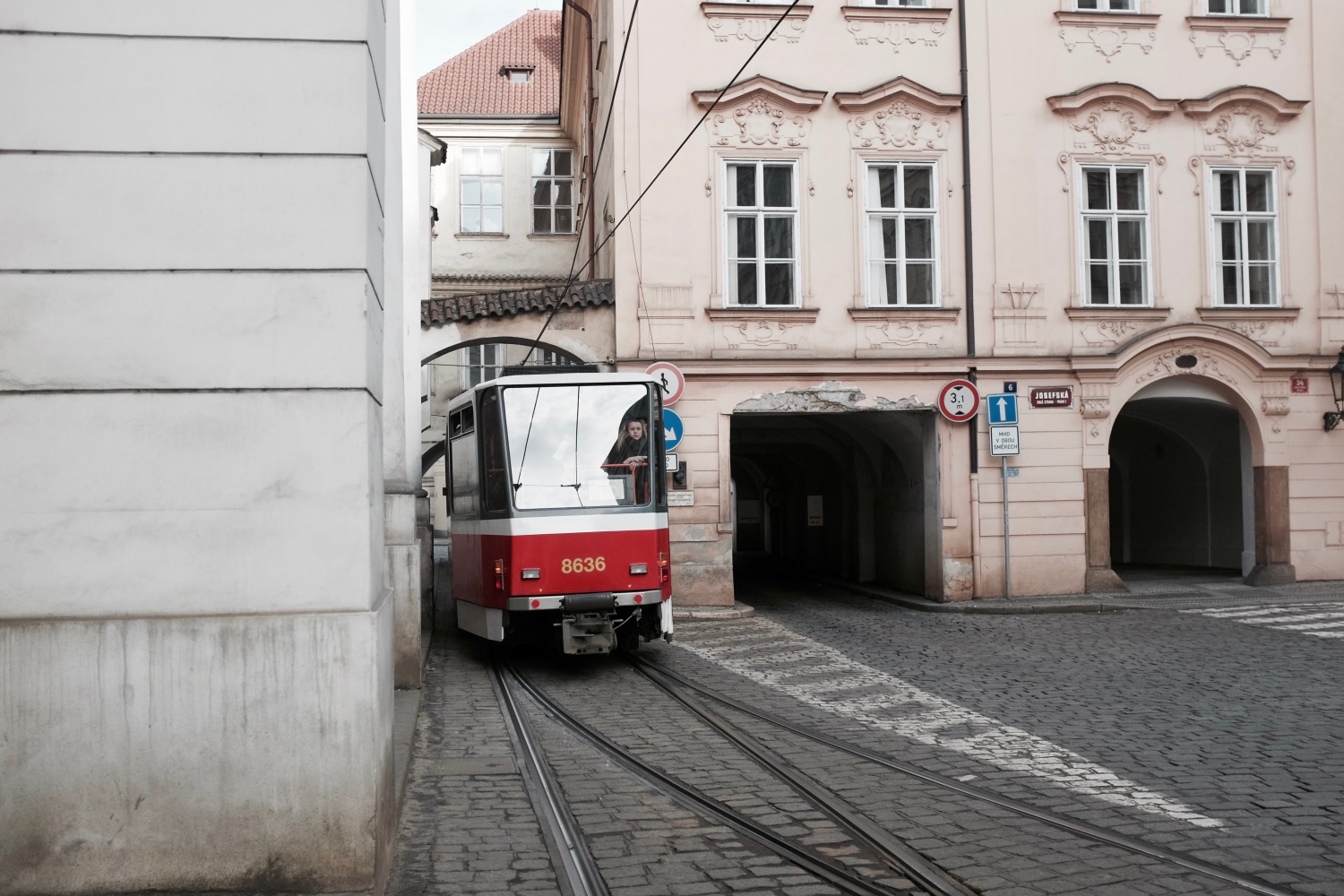 Tram drivers are notoriously tough -- equally so the growing number of women “behind the wheel” (though there are no steering wheels to speak of, just a series of buttons that control the speed and brakes). The drivers take no guff from surly passengers and have been known to eject undesirables in the middle of night in the middle of nowhere. In the winter, when some trams become, in effect, rolling shelters for the city’s growing homeless population, the drivers have the unenviable task of clearing the seats for paying customers. During the coldest days, drivers sometimes relent and allow the homeless to stay put, often sprawled out and snoring over half the car.

The drivers also brook no dissent from cars, bikes, or even pedestrians as they maneuver their mechanical beasts along the city’s narrow streets. Cars caught inadvertently crossing over the tracks at rush hour inevitably hear the tram driver’s rage in the form of a jarring, hyperactive bicycle bell, an aural cattle prod that speaks directly to the basest survival instinct to get out of the way.

Prague’s extensive tram network sprang up in the early years of the 20th century, more or less concurrent with the country’s independence from the Austro-Hungarian Empire at the end of World War I. One of the original electronic geniuses behind the system was a Czech, František Křižík, though it must be admitted that tram culture here borrows heavily from Vienna. Anyone who’s spent much time in the Austrian capital will feel at home in Prague.

As in Vienna, the basic tram color is red, with Prague sometimes adding an incongruous cream-yellow or gray to the mix (or other colors if the tram is carrying an ad). In both cities, the stops are usually spaced at comfortable 200- to 300-meter intervals, and each stop has a timetable showing the exact arrival time (down to the minute) and the distance (in minutes) to each stop along the way. In Prague these are surprisingly accurate. In a city where plumbers, electricians, and even real estate agents routinely turn up for appointments an hour or even a day late, it’s rare that a tram is even a couple of minutes behind its appointed round.

If there’s a difference between the two cities, it’s that in Vienna the trams feel, well, quaint, as if the city fathers keep them running to reinforce the image of a truncated but still grand imperial capital. That’s especially true of those highly evocative, older trams that until recently plied Vienna’s Ringstrasse. The cars were filled with that pleasing odor of wood scent and grease, like a roller-coaster car in an old-time amusement park.

In Prague, the trams are anything but quaint. I often think of them as the transportation equivalent of the city’s panelaky – the utilitarian pre-fab housing projects that surround the city and were highly popular from the 1960s to the ‘80s. Like the panelaks, Prague’s trams can be drafty, boxy, and spare, complete in some cases with cracked veneer and a kind of institutional drabness that permeates inside and out. On the other hand, as with public housing, the trams are remarkably efficient and democratic. Each day, they effortlessly haul carloads of doctors, lawyers, housewives, students, and vagrants, all primly seated next to each other, enjoying a lovely view out the window.

In a city that’s now in the midst of remarkable change, the trams add a welcome sense of permanence. Looking at old tram maps from the 1920s and ‘30s at the city’s Public Transport Museum (Muzeum městské hromadné dopravy) in the Střešovice district, it’s shocking to see how little the basic layout has changed. Even with the modifications to the system the city made in 2016, the no. 12 tram still wends its way northward from the suburb of Smichov in the southwest across town to the neighborhood of Holešovice and beyond -- just as it did 70 years ago. The no. 17 tram still hugs the eastern bank of the Vltava for much of its run, as it always has. It’s no stretch to say that an old man, a Czech Rip Van Winkel, coming back to the city from the 1930s might be, in turns, horrified and amazed to hear about the Nazis and Communists, the Velvet Revolution, and the European Union, but would have no trouble at all making his way home that night on the tram. 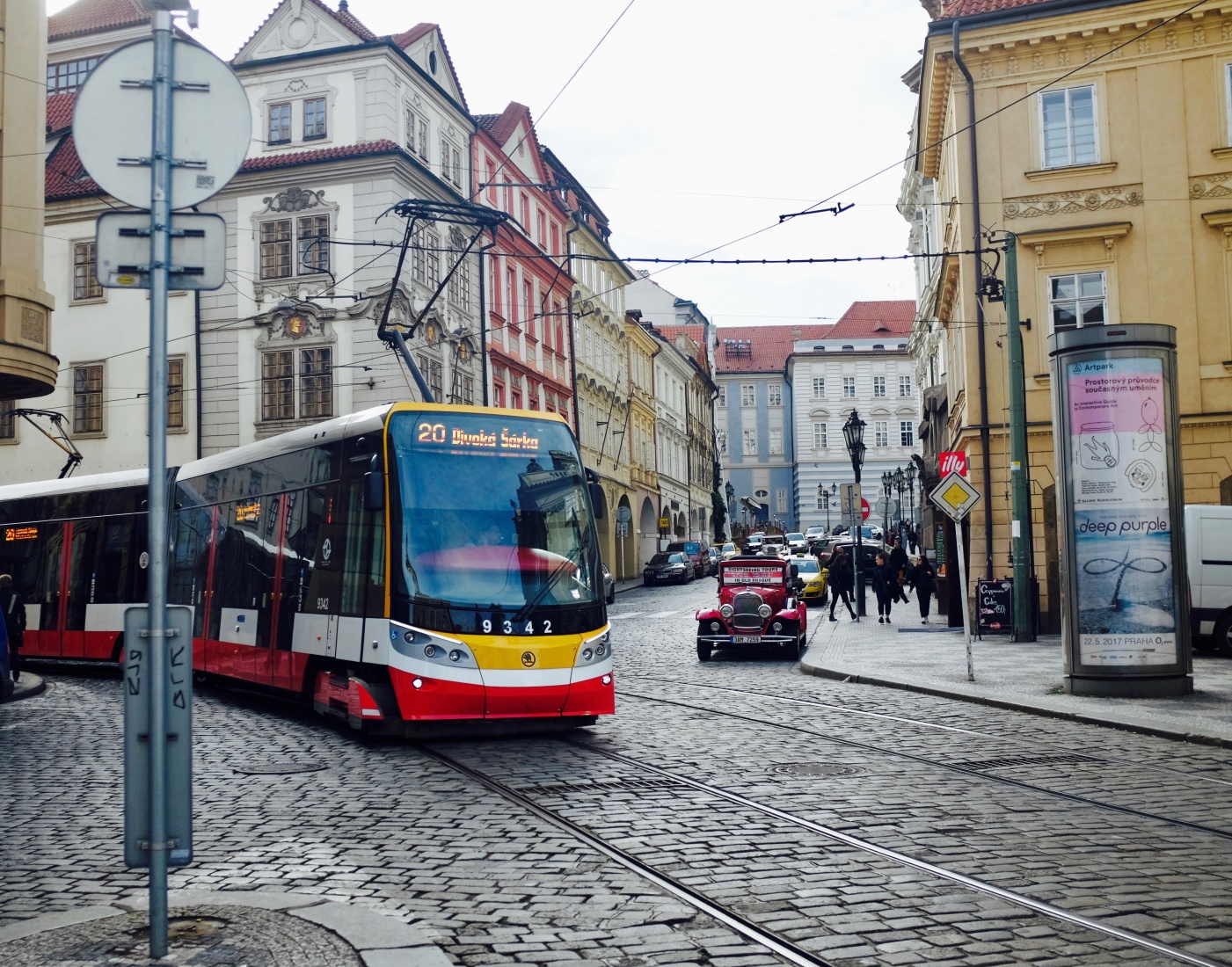 Prague’s cobblestones are crammed with all kinds of vehicles, including whale-sized trams and old-timer jalopies. Photo by Mark Baker. 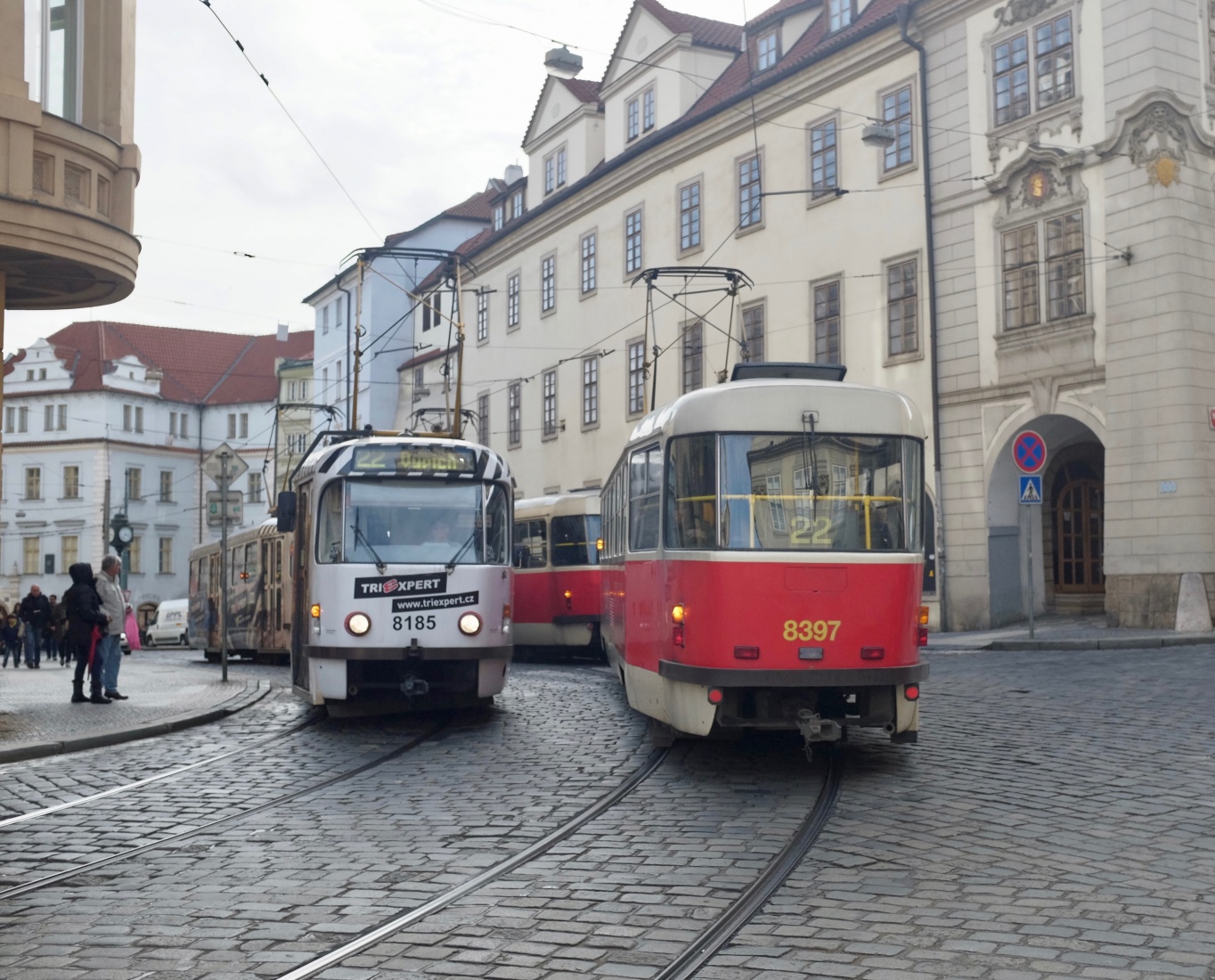 A tourist favorite, the no. 22, negotiates a narrow curve in Malá Strana. Photo by Mark Baker.