In any normal year, March would mark the start of Prague’s long tourist season. Just as the weather begins to warm -- as perennial as those early buds on the trees -- the first big groups of Italians would start arriving in advance of the Easter holiday. Over the next six or seven months, more than 10 million people from around the world would follow. With those first dollars or euros they exchanged at the rip-off currency booths at the airport, their expenditures, for hotel overnights, restaurant meals, souvenirs, concert tickets and a thousand other things, would provide the city with a huge chunk of income and jobs for one in every 10 of its residents.

The year 2021 is shaping up to be anything but normal. Since the start of the year, as the number of coronavirus cases has continued to climb, the city has been in near-total lockdown. Most non-essential businesses remain closed and visitors are largely barred from entering the country. This follows a year, 2020, when -- judging from stats like the number of hotel overnights or passenger arrivals at Prague Airport -- the city's tourist economy shrank by something like 80-90%.

I’ve been in Prague long enough now to remember the disastrous flood of 2002, when the Vltava River crested its banks and flooded the Gothic cellars of the Old Town. This current calamity, if anything, feels on that scale, if not perhaps even worse. An odd feature of that earlier disaster was that while the damage it caused to outlying areas, like Smíchov and Karlín, was clearly visible to the naked eye, the damage to more central areas, like the Old Town, was harder to see. The buildings were still standing, but rotting from within. As I walked around the center of Prague last week, in mid-March, to survey and record the present-day damage, I felt a distinct sense of déjà vu. The empty storefronts and neglected, graffiti-covered buildings looked eerily familiar. All that was missing was a sharp stench of mildew hanging in the air.

I have no doubt that Prague, as it did after the 2002 flood, will recover when this is all over. The city’s beauty is still intact (and the beer will always be cheap and good). The question remains, though, what will have changed that we can’t yet see? What will the tourism landscape here look like once the world finally gets the all-clear? I take encouragement from the fact that two decades ago, Prague came back stronger and better than ever.

Here are some photos from that walk (scroll past the map for more images).

Top photo: Prague's Old Town Square on a quiet afternoon in March 2021. Aside from the lack of people, everything looks relatively normal (even the new Marian column doesn't mar the image). Below the surface, though, the lockdown's impact on the economy is harder to see. Photo credit: Mark Baker
Posted in Life In Prague and tagged 2021, covid, lockdown, Prague, Praha, tourism.
Add a comment 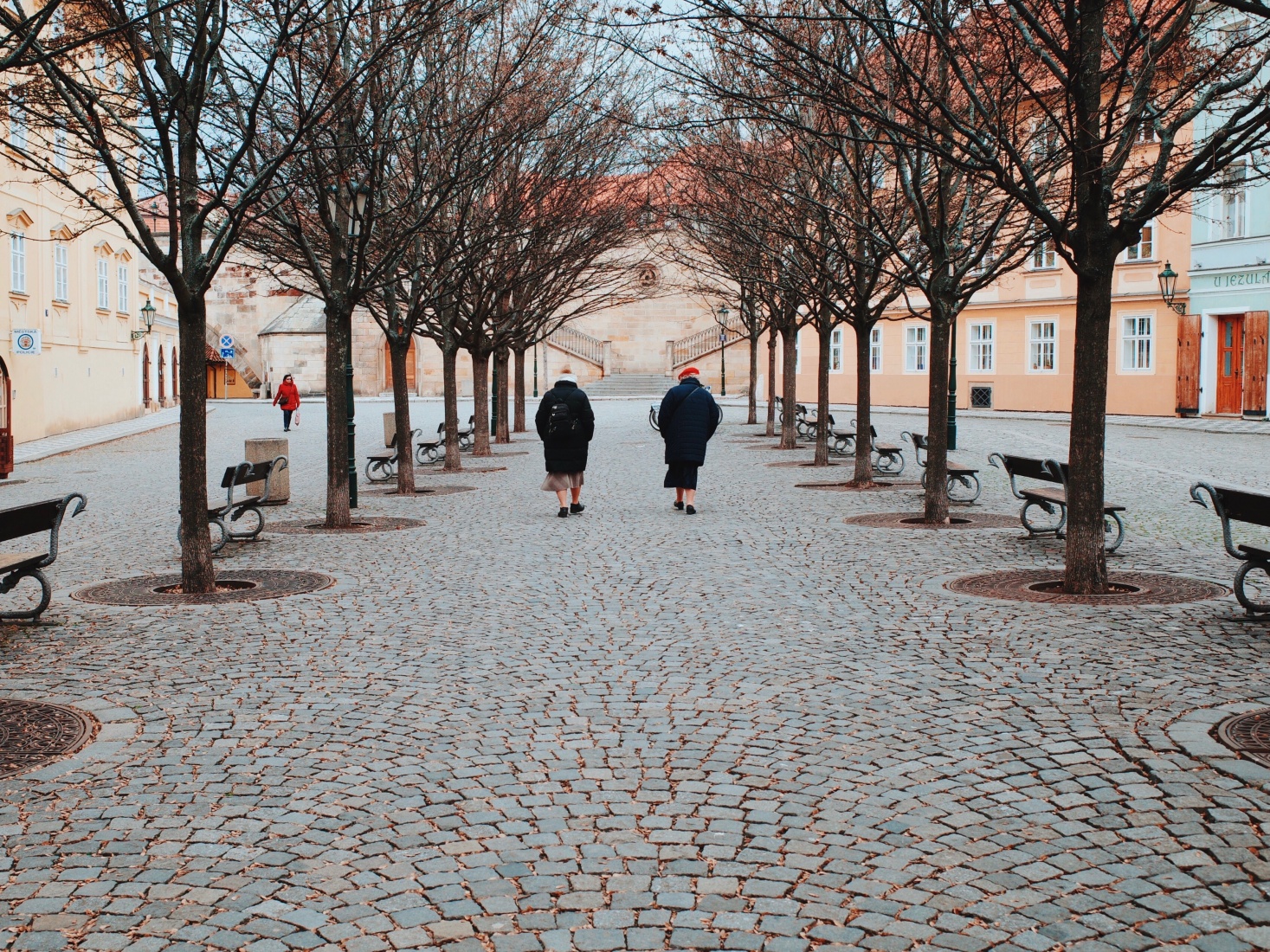 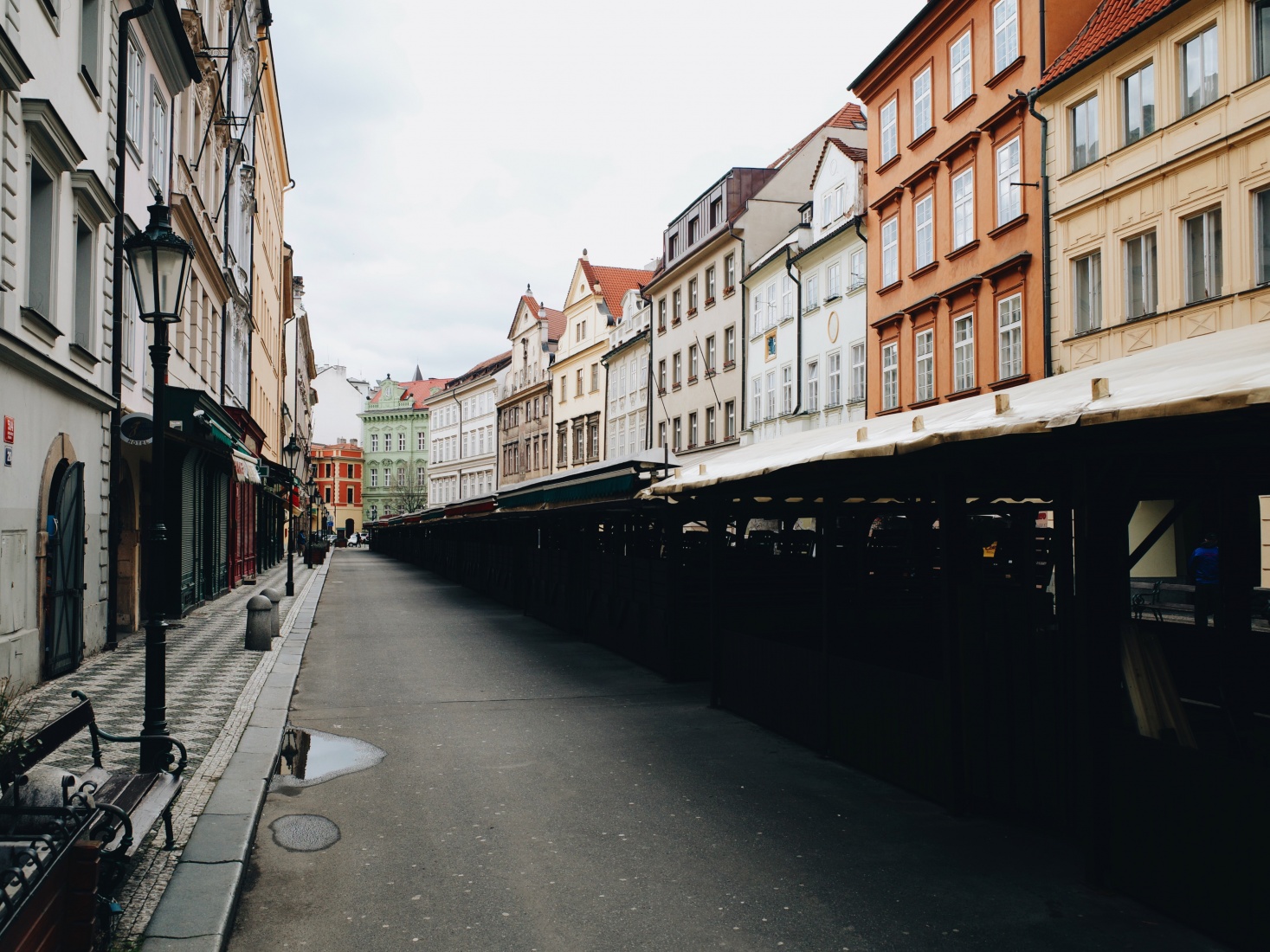 One side of the normally packed Havel market. A friend told me that before the current lockdown, the market had never closed (and even operated through the 1918 pandemic). Photo credit: Mark Baker 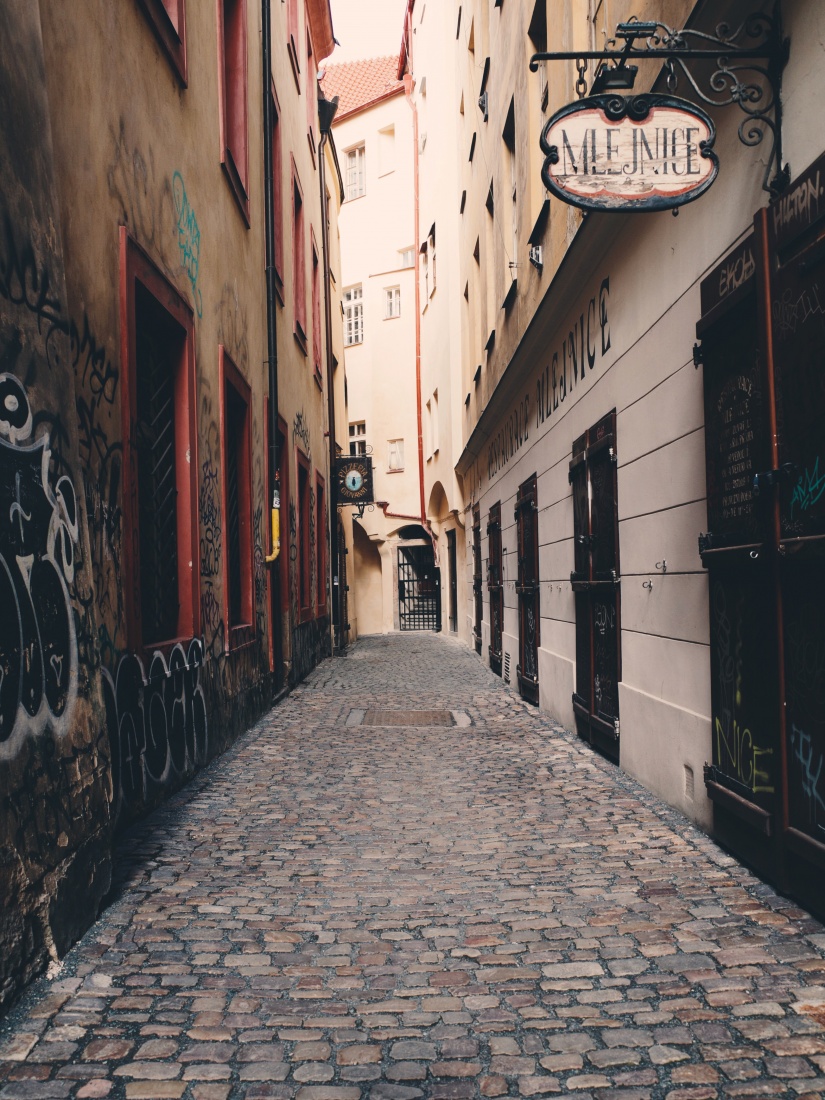 This back alley leading away from Havel market is often quiet, even during the height of the tourist season, but feels lonelier than normal these days. Photo credit: Mark Baker 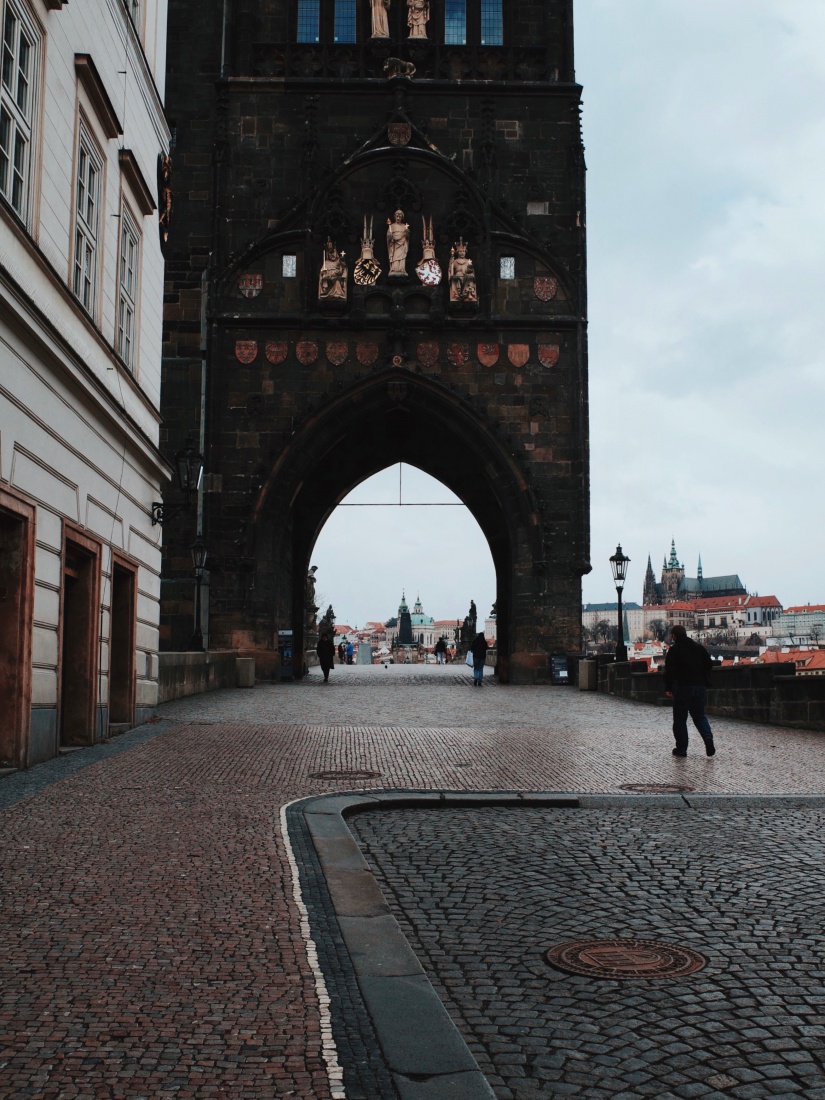 The entrance to Charles Bridge, looking over to the Malá Strana side of the river from the Old Town. Photo credit: Mark Baker 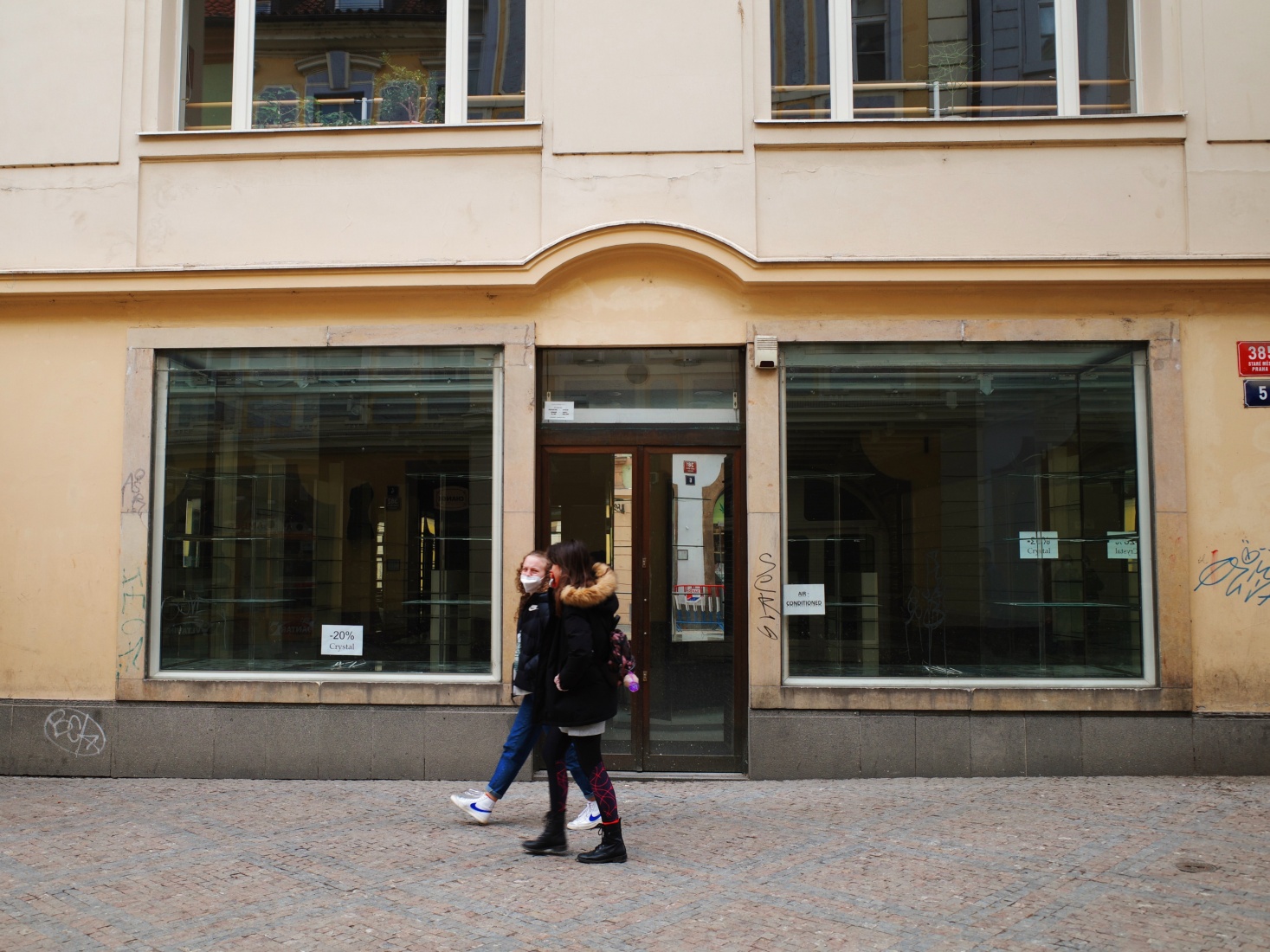 Two girls walk past what was once a tacky souvenir shop near the Mustek metro station that's apparently now gone belly up. Photo credit: Mark Baker 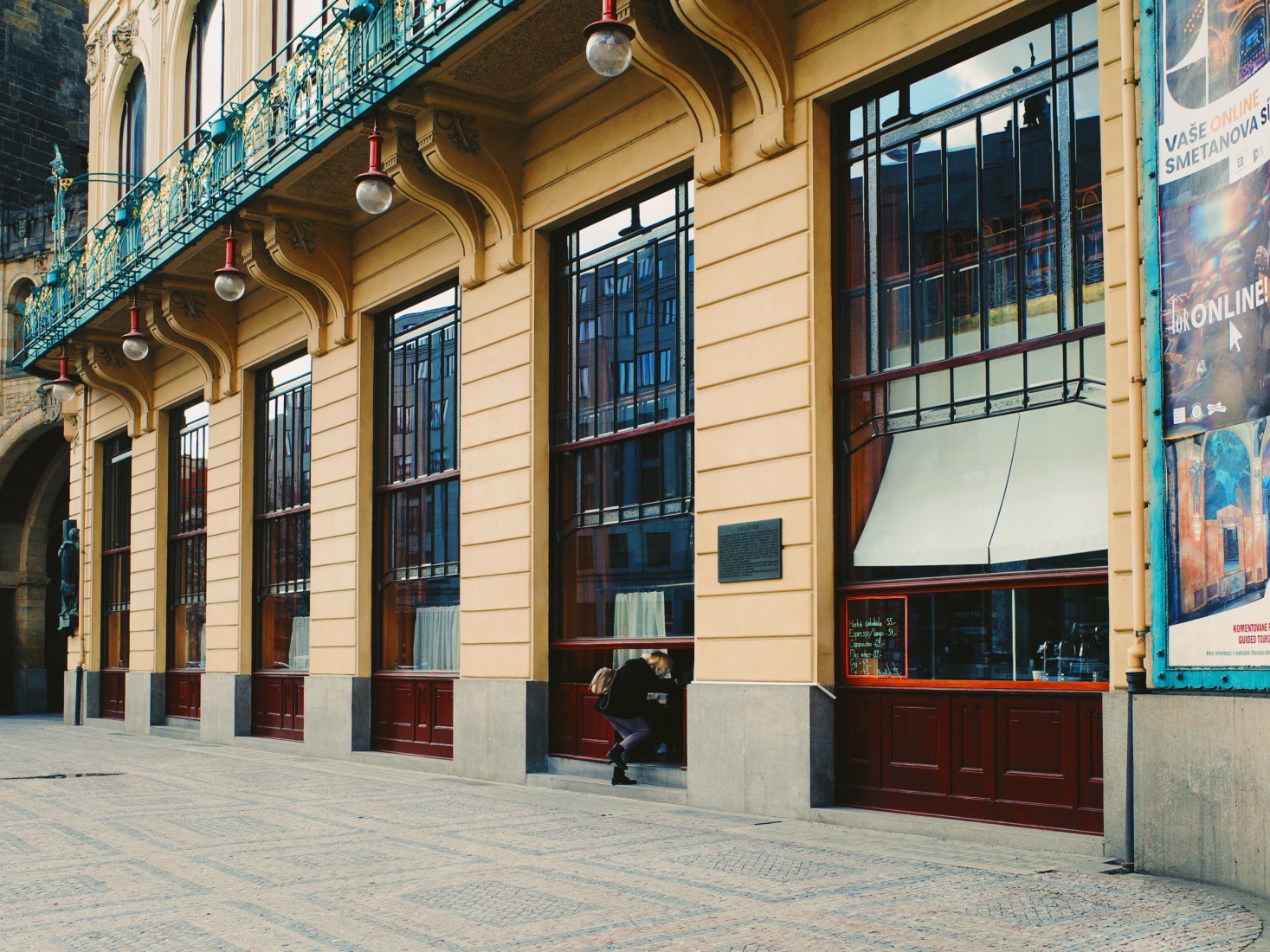 Even in the cold early-spring weather, the crowds from the Municipal House cafe would normally spill out onto Republic Square. These days, you can apparently only enter the building through the window(?) Photo credit: Mark Baker 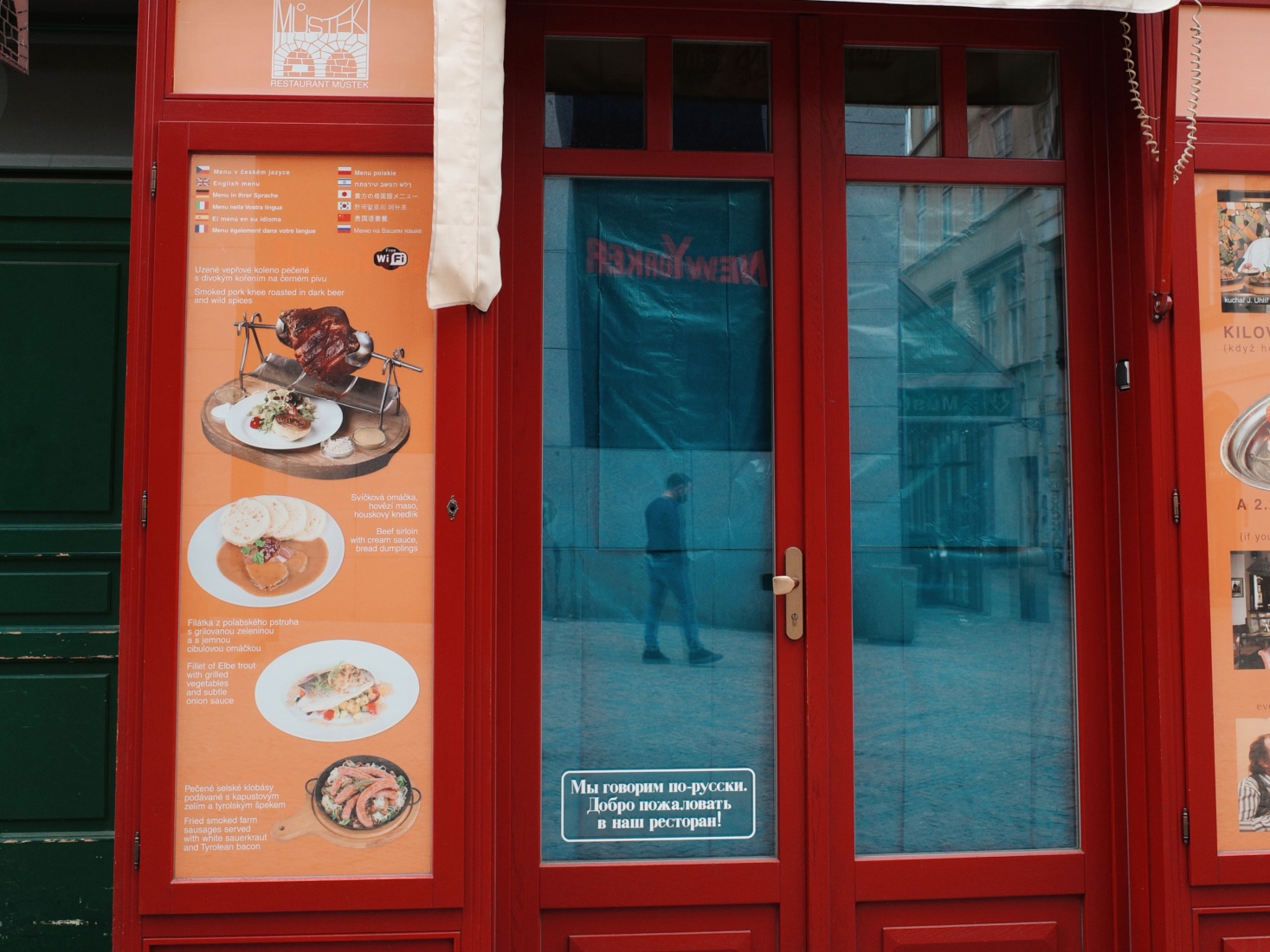 A tourist-trap restaurant, located on a pedestrian throughway just beside the Mustek metro station. No one will shed a tear if these kinds of places don't come back. Photo credit: Mark Baker 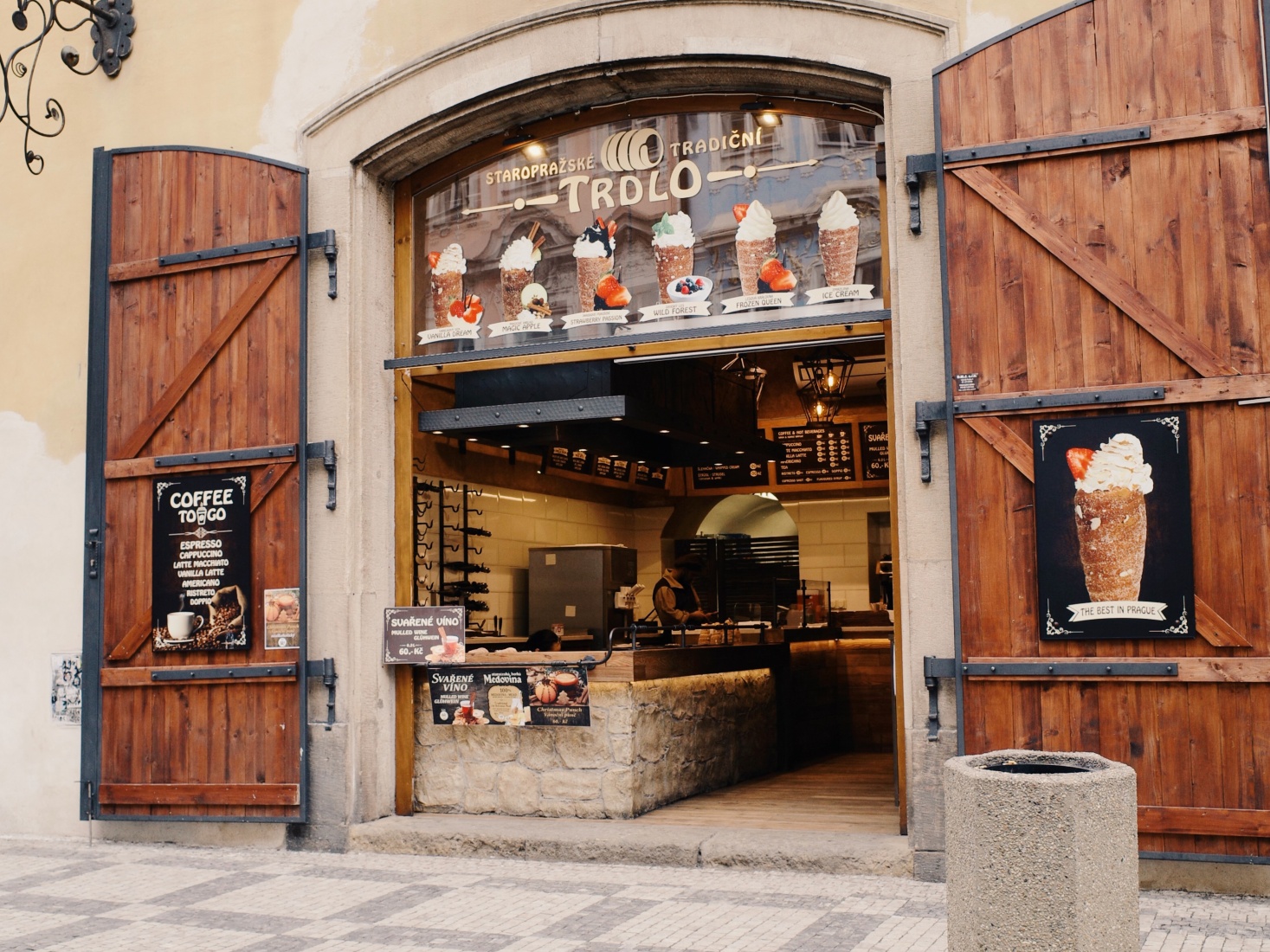 Oddly, 'chimney cake' shops are still operating. The 'trdelník' was one strangest inventions to emerge from mass tourism. Said to be a traditional Czech dessert, I have yet to see a local person ever eat one. Photo credit: Mark Baker 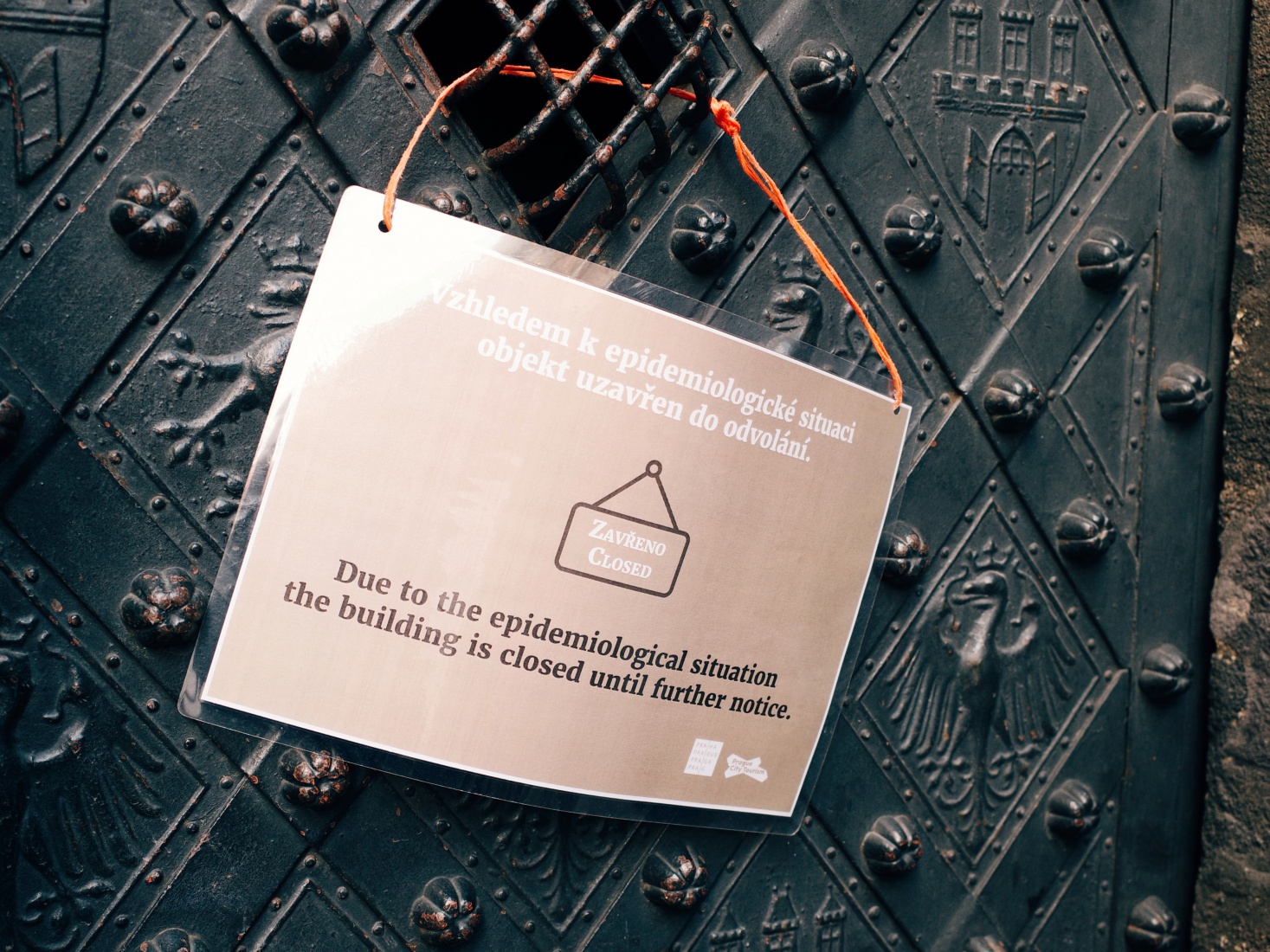 A sign of the times on the door of the Powder Tower, where you can climb to the top for a view out over the Old Town. Photo credit: Mark Baker 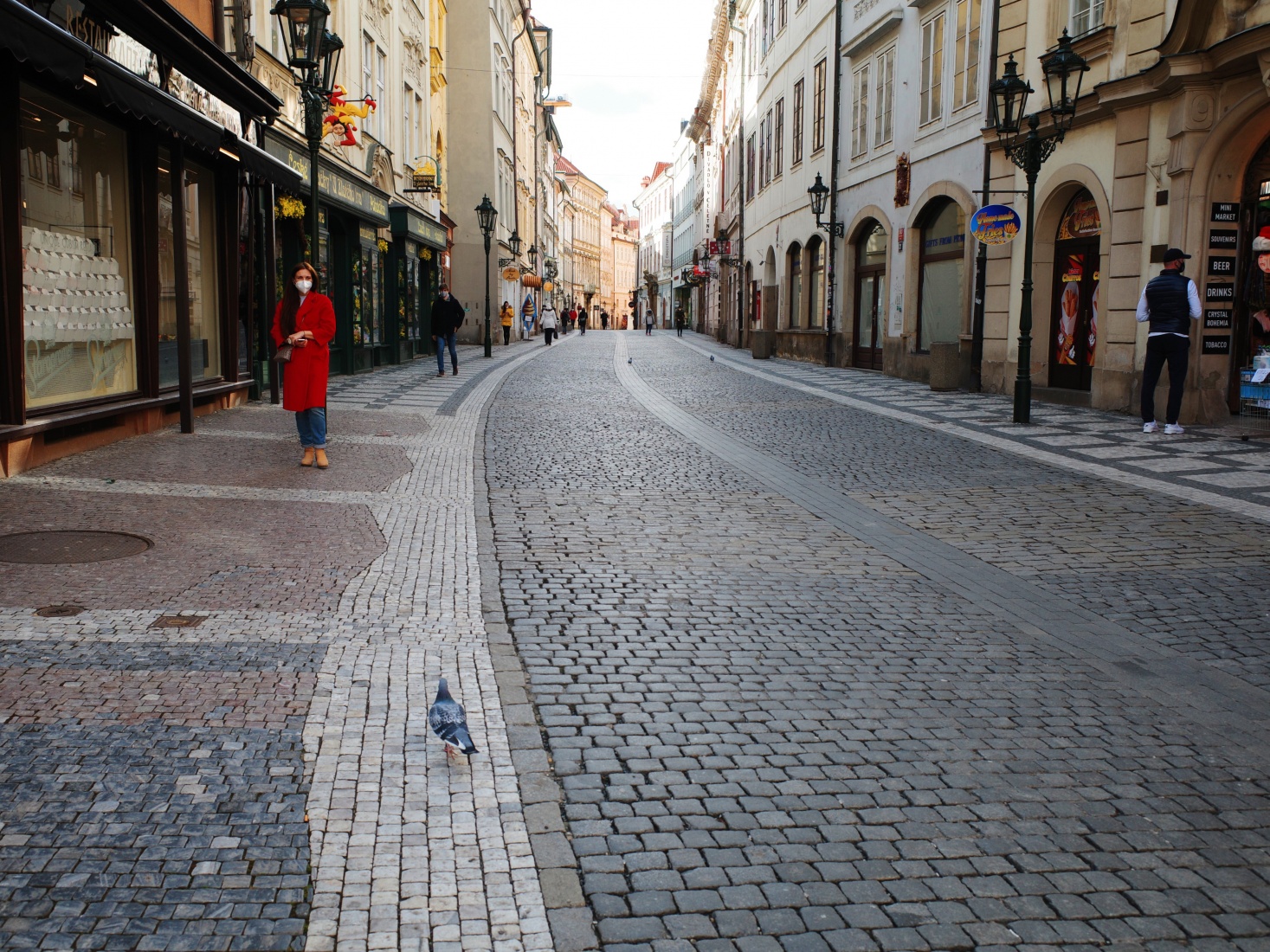 A quiet Celetná in mid-March 2021. This street runs from the Powder Tower to Old Town Square and would normally be filled with visitors in the run-up to Easter. Photo credit: Mark Baker 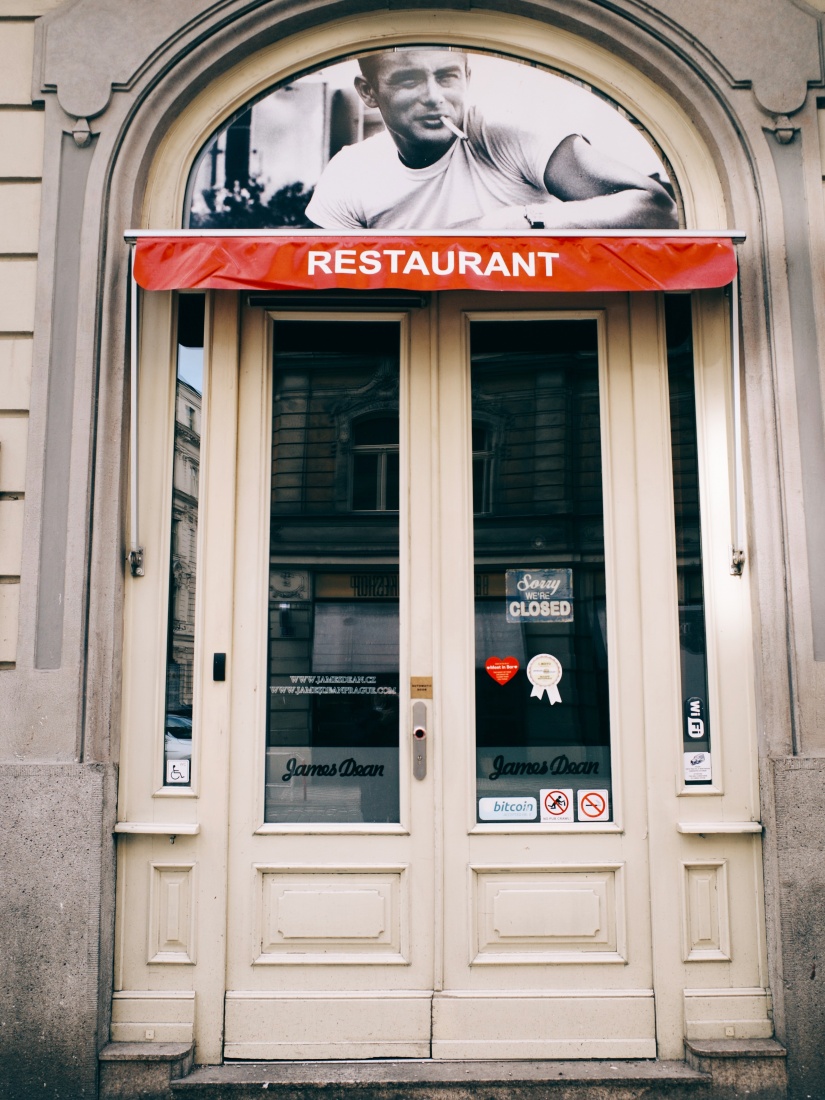 The "James Dean" restaurant and club, a block off Old Town Square, was closed during my walk. I typically avoid this place "like the plague," an expression that's taken on new meaning. Photo credit: Mark Baker 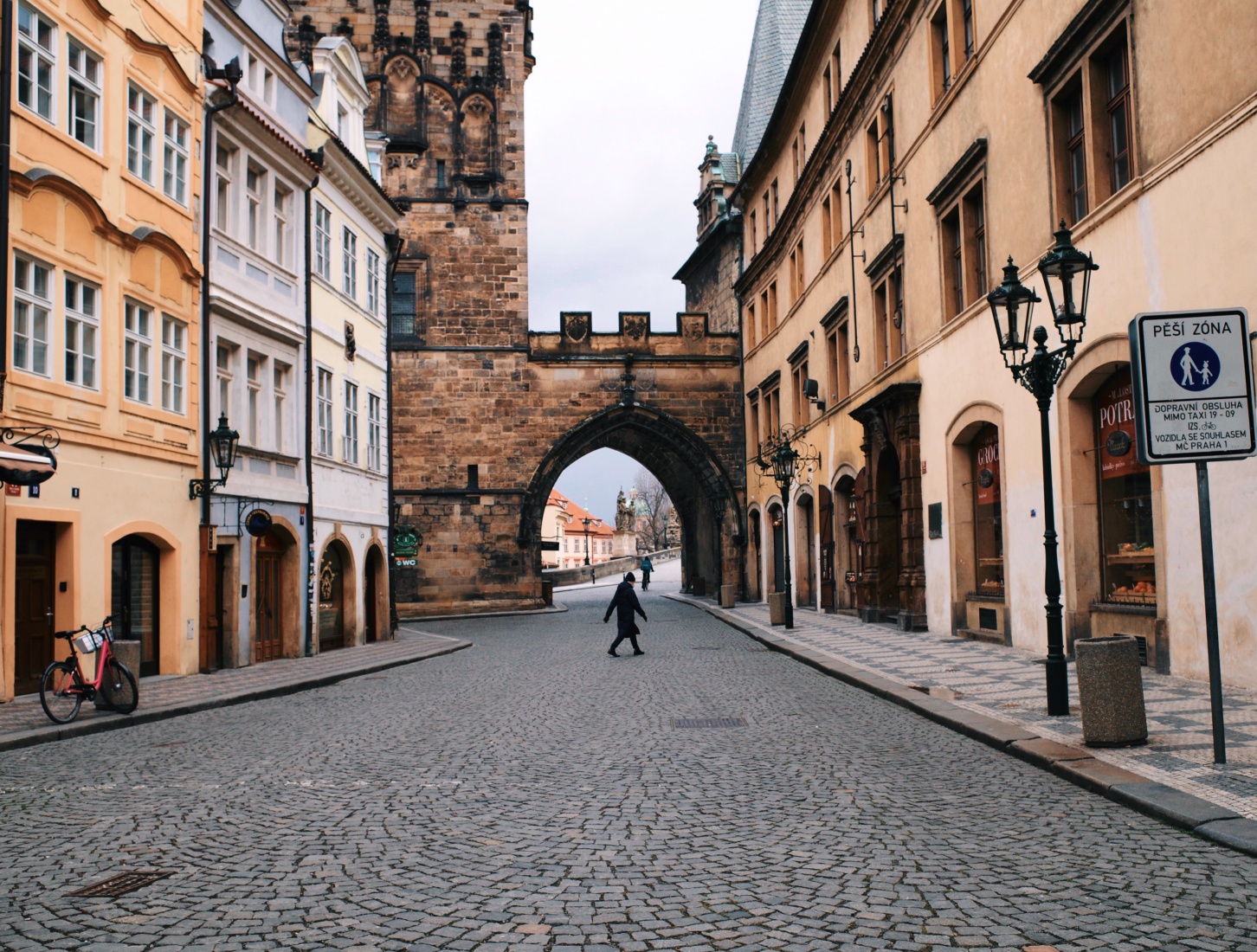 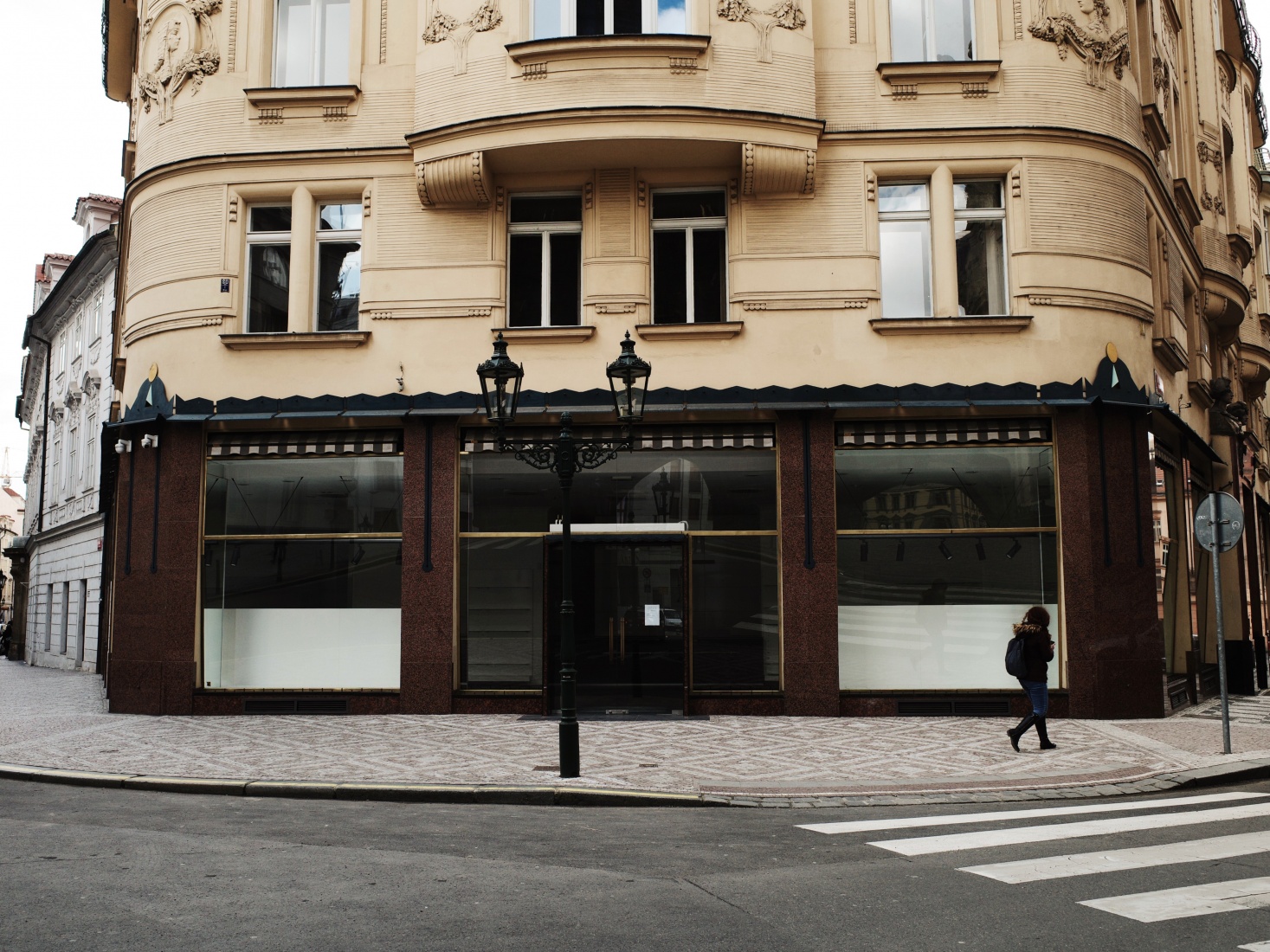 Before the pandemic, this was a popular shoe shop along the street that leads into the heart of the Old Town. Photo credit: Mark Baker 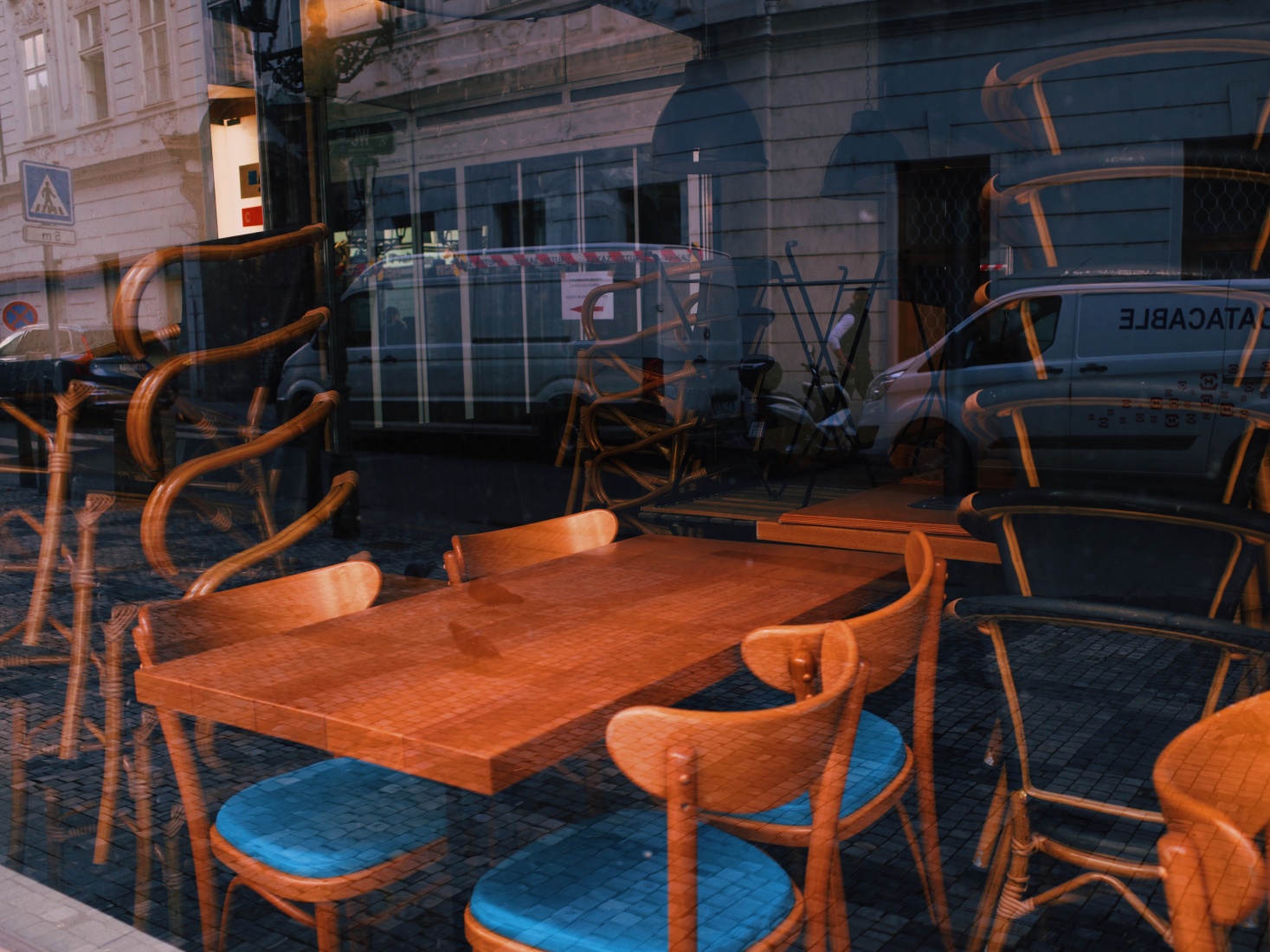 A common sight through the window: unused chairs stacked up in a shuttered restaurant. This is "Joy Burger," not far from Celetná street in the Old Town. Photo credit: Mark Baker 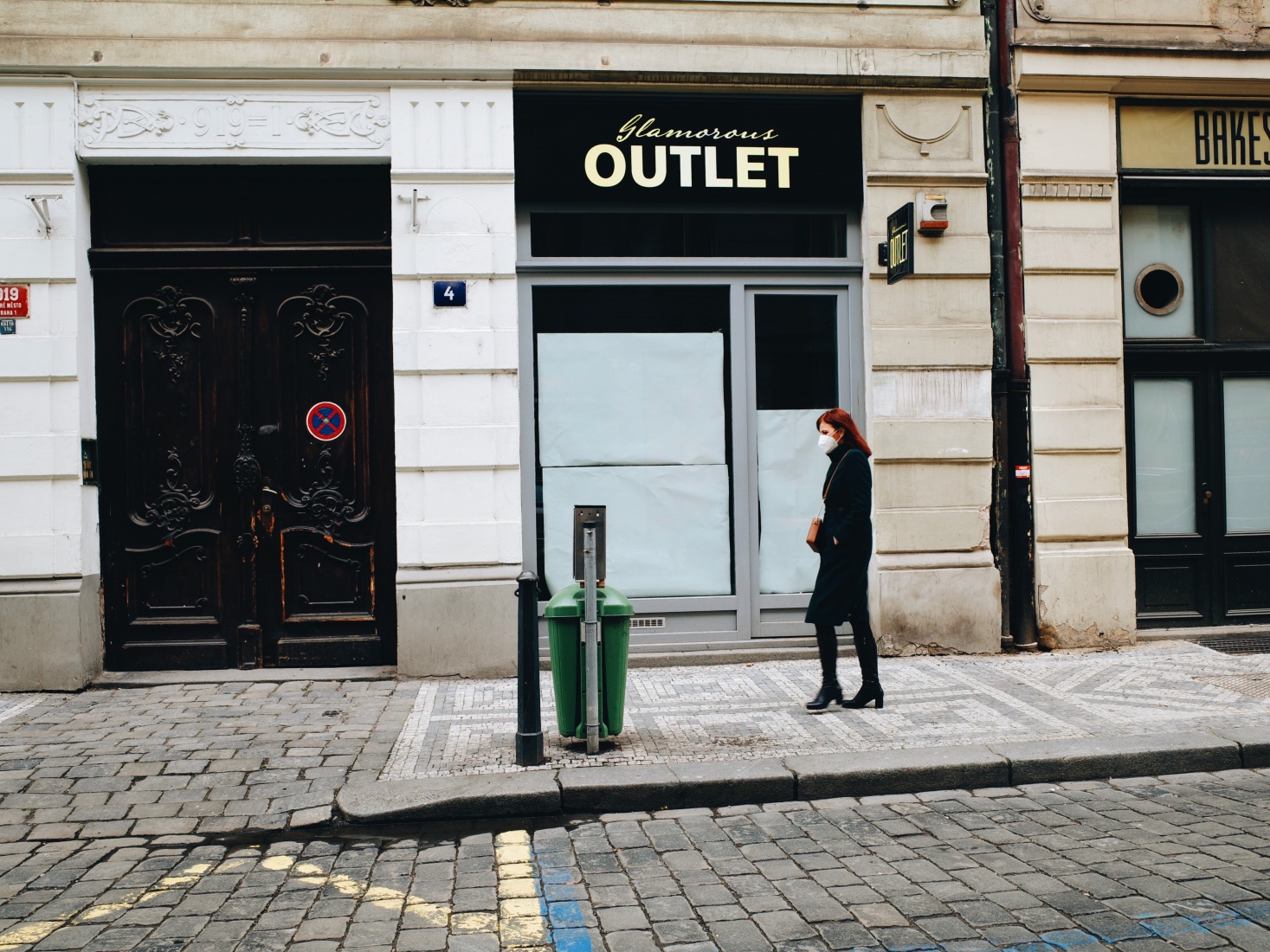 A closed-up storefront somewhere along the back streets of the city's Old Town. Who knows if this business will re-open once the lockdown is lifted. Photo credit: Mark Baker 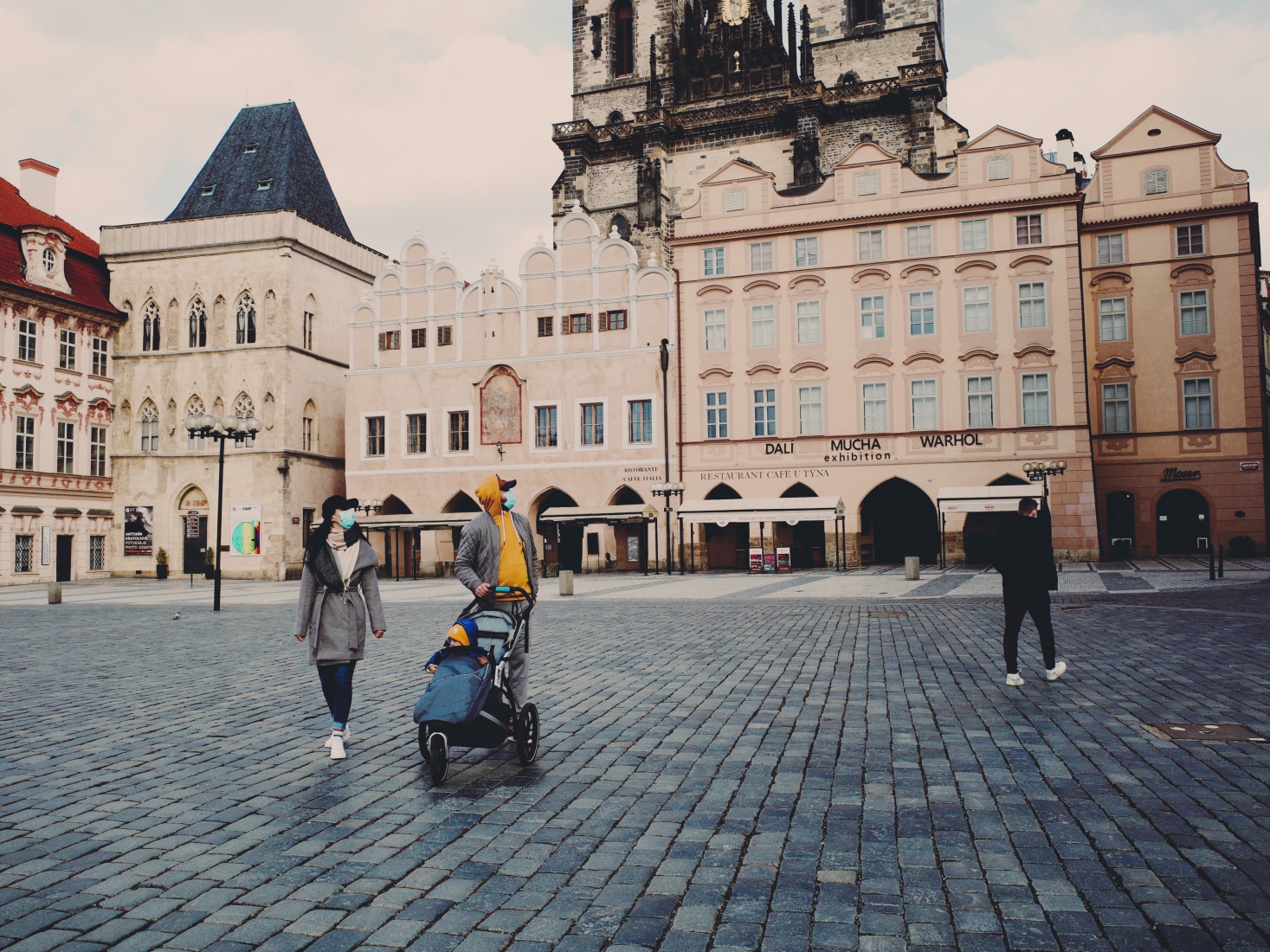 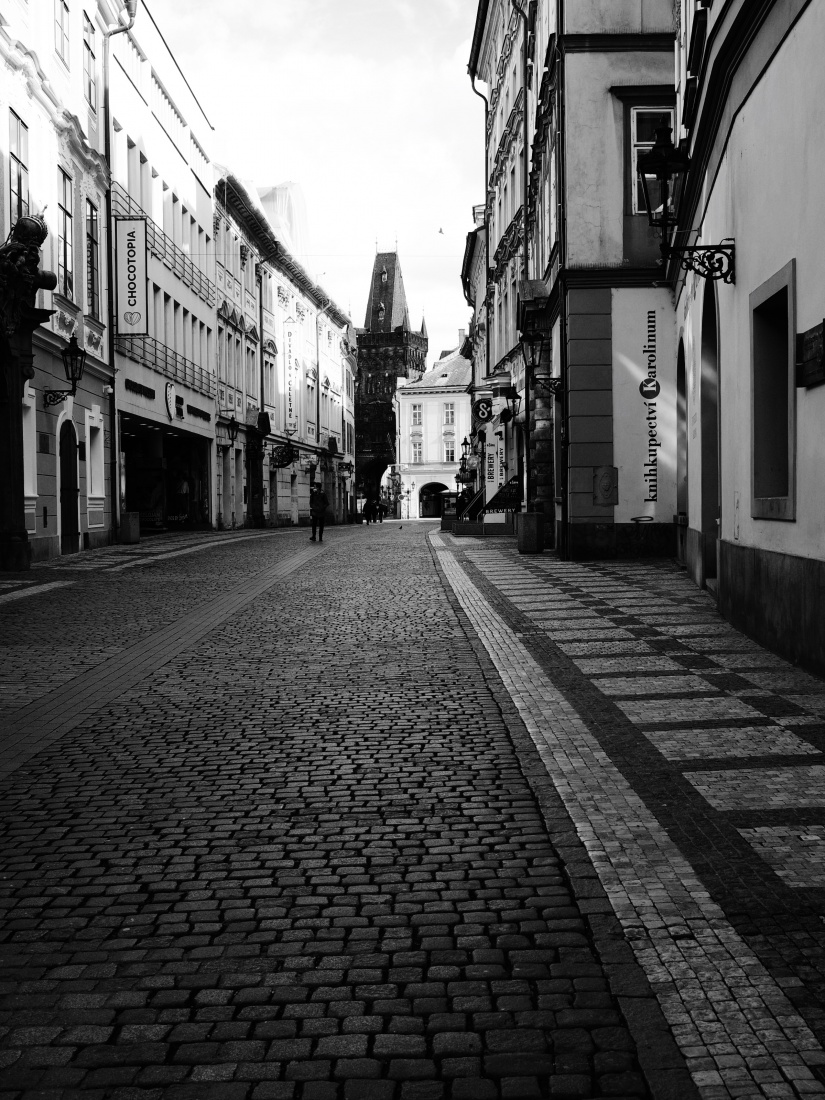 Looking down normally crowded Celetná street from the Old Town Square in the direction of the Powder Tower, one of the original gates to the Old Town, in the distance. Photo credit: Mark Baker 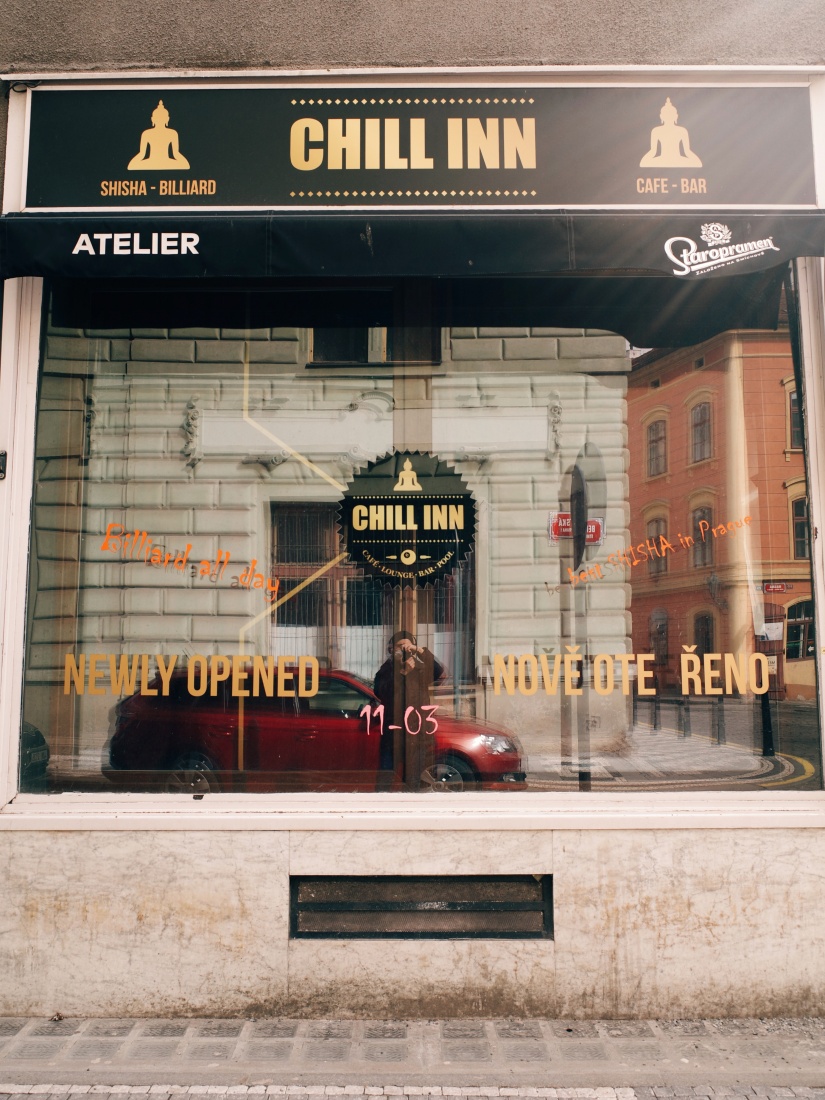 One of dozens of popular youth hostels that have closed down because of the restrictions and lack of customers. Many of these will come back, but some will close for good. Photo credit: Mark Baker 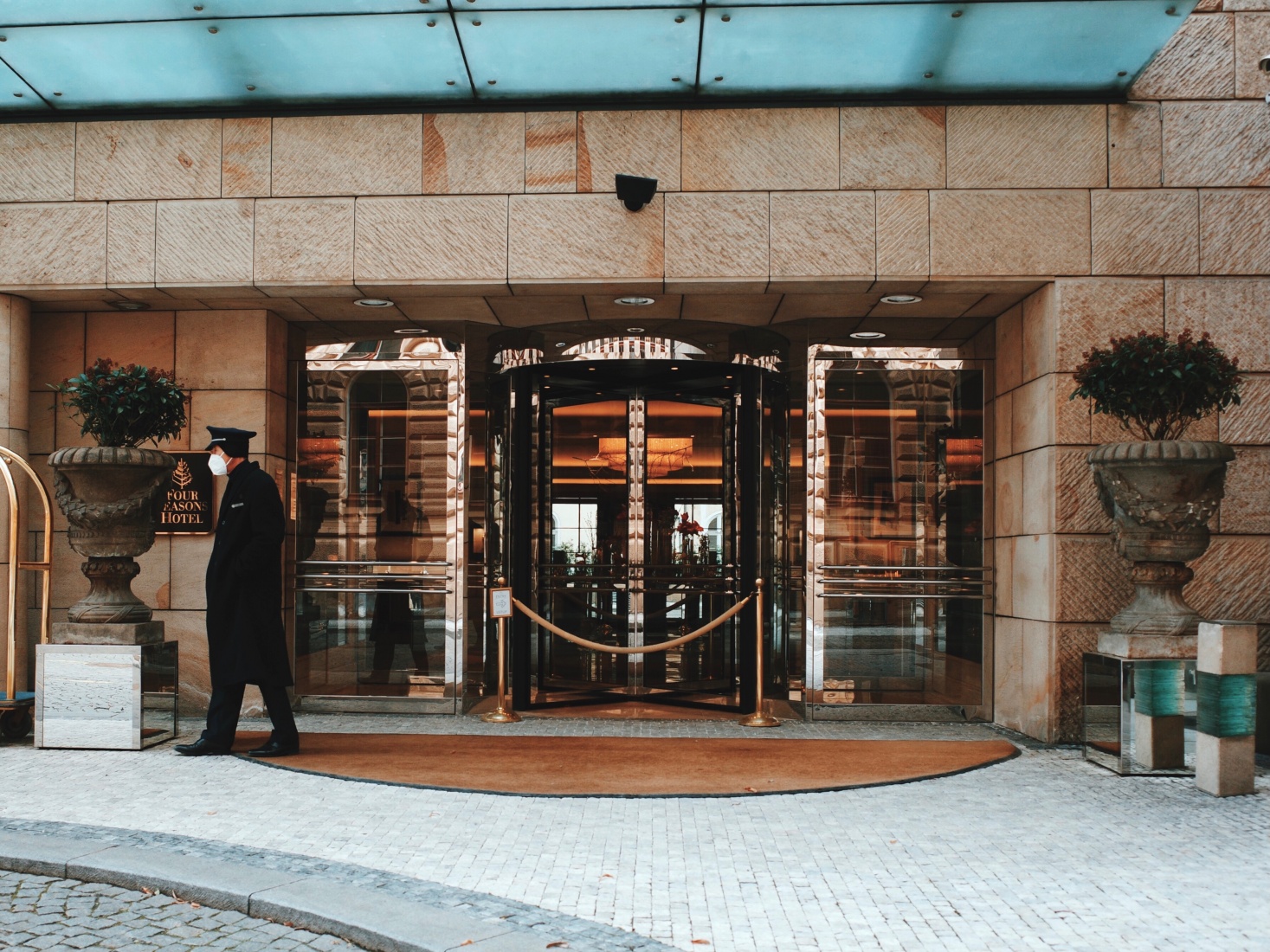 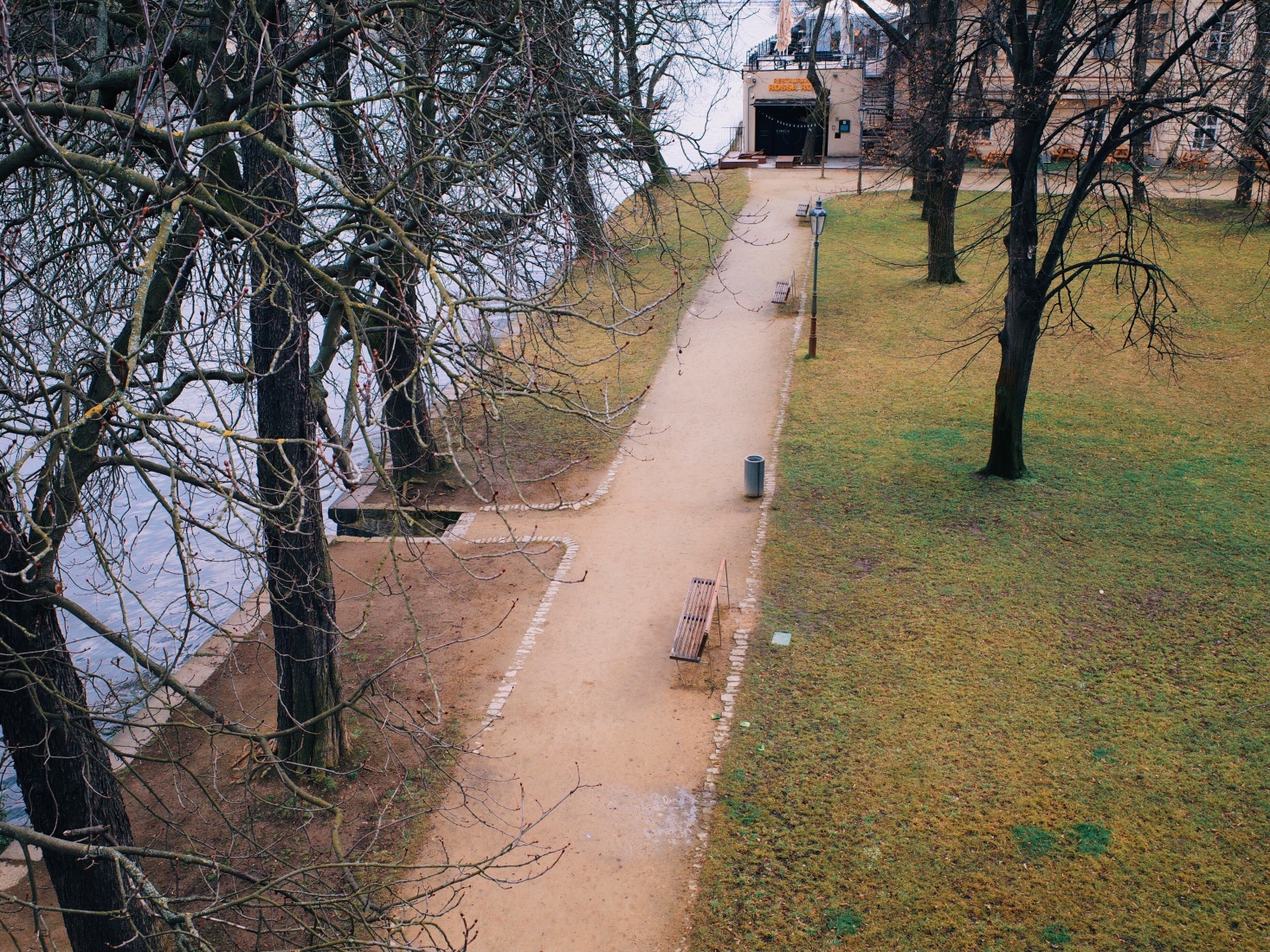 An empty row of benches along the eastern side of Střelecký Island, facing the National Theater. Photo credit: Mark Baker 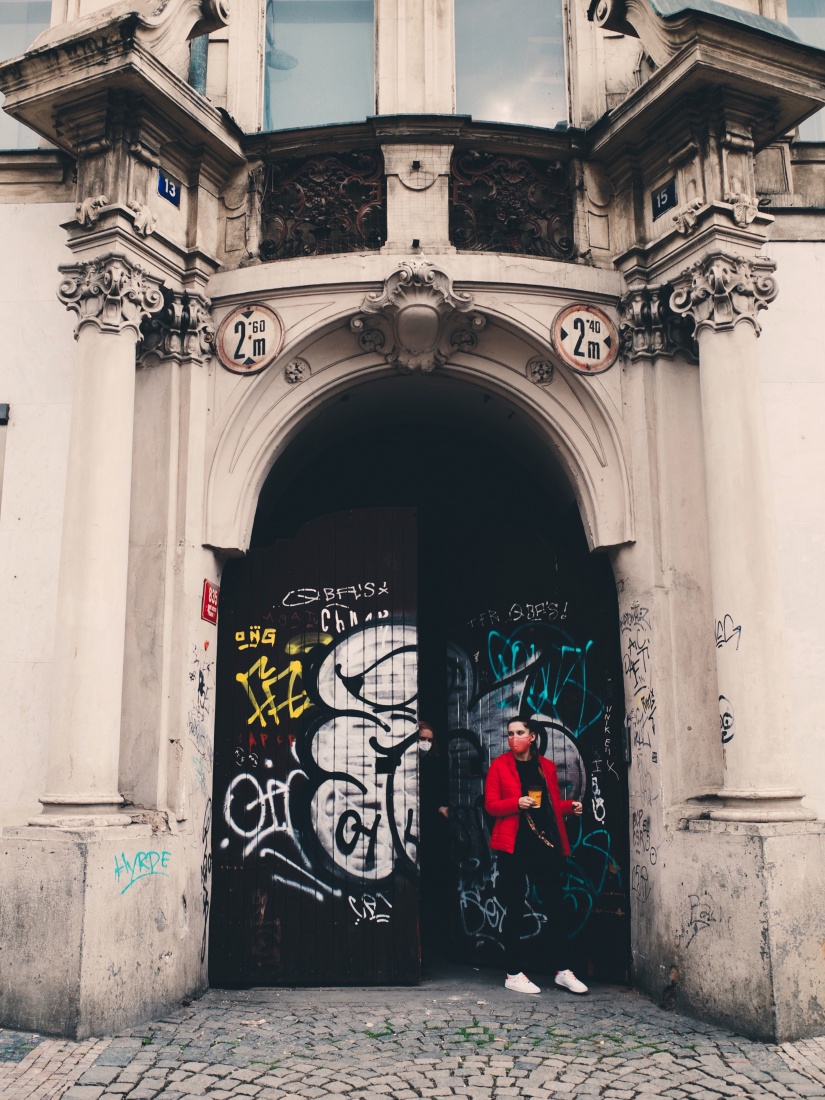 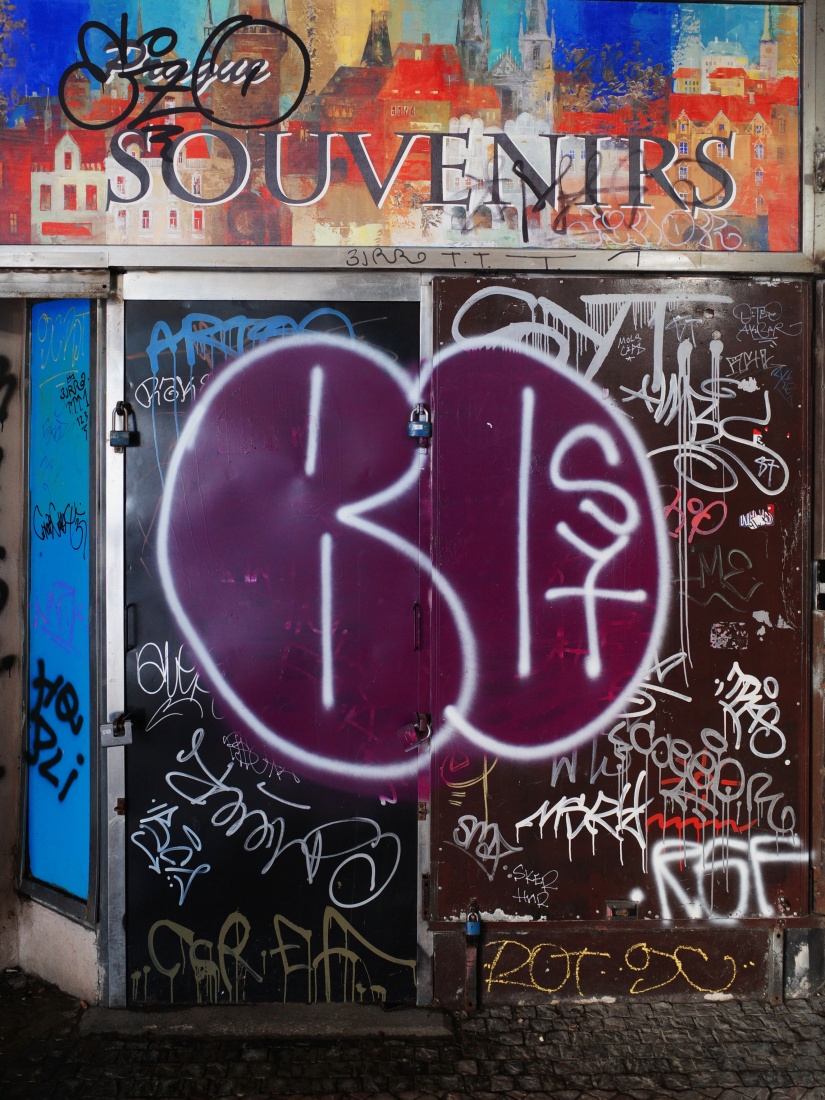 The doors of this shuttered souvenir shop near the Powder Tower in the Old Town are covered in spray paint (to be fair, though, this doorway has always been a graffiti magnet). Photo credit: Mark Baker