I've been writing about Romania off and on for more than 10 years, researching guidebooks for Lonely Planet and other travel publishers, as well as writing feature articles for newspapers and magazines. Over that time, as an American traveling in Romania, I've gotten myself into some strange and unexpected situations, but nothing comes close to the weekend I spent in the Romanian capital, Bucharest, with my girlfriend at the time in the spring of 1990.

Top Photo: The miners forcefully escort a woman out of Bucharest's central area. There was a near total breakdown of authority. The woman in the photo, Ioana-Izabela Odor, later became a symbol of the brutality of the miners. Photo by Andrei Iliescu
Posted in On The Road, Tales From The Past and tagged 1989, Bucharest, mineriada, miners, revolution, Romania, Timisoara.
Add a comment 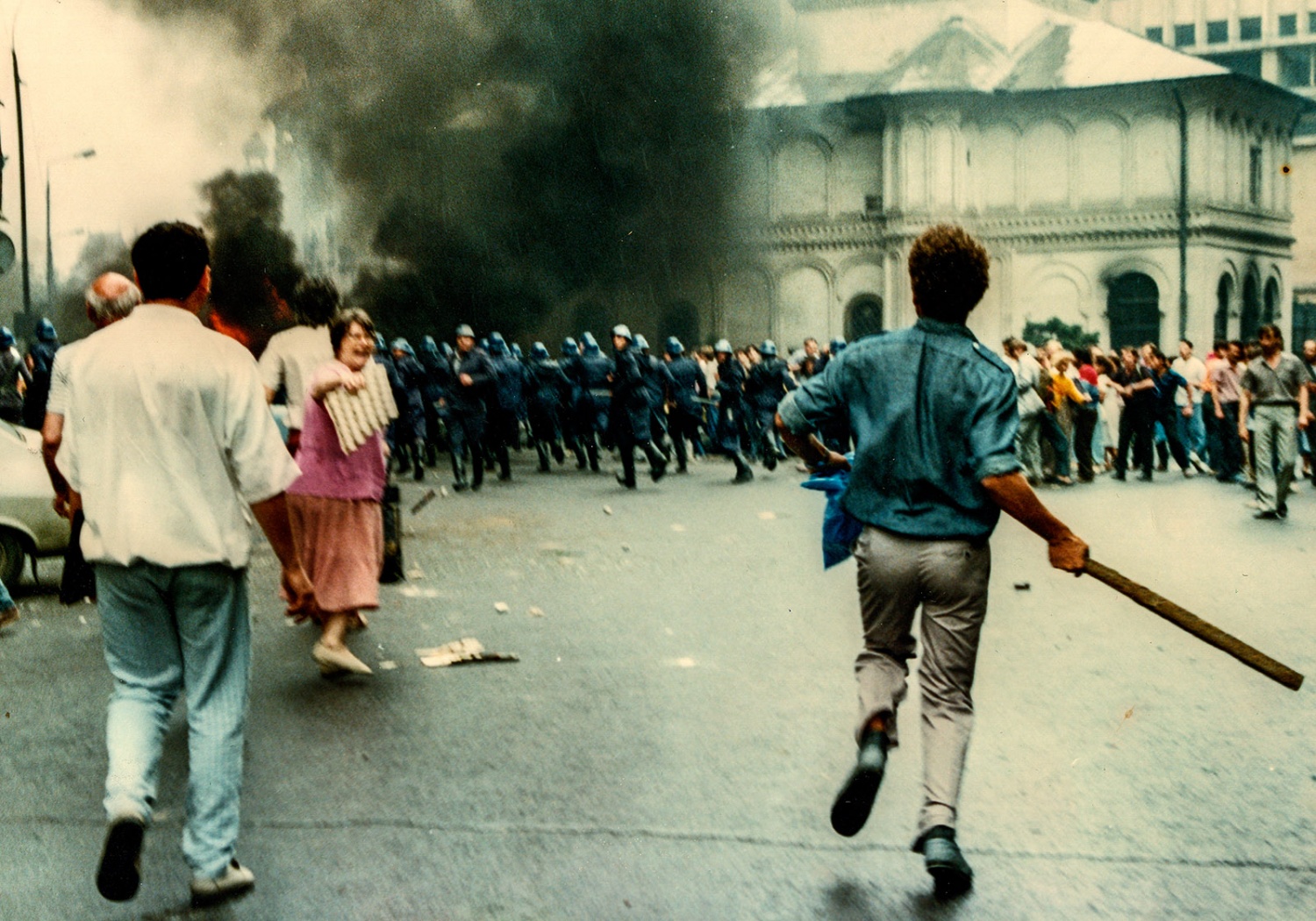 Pitched battles between demonstrating students on one side and the police (and miners) on the other. Bucharest June 1990. Photo by Andrei Iliescu 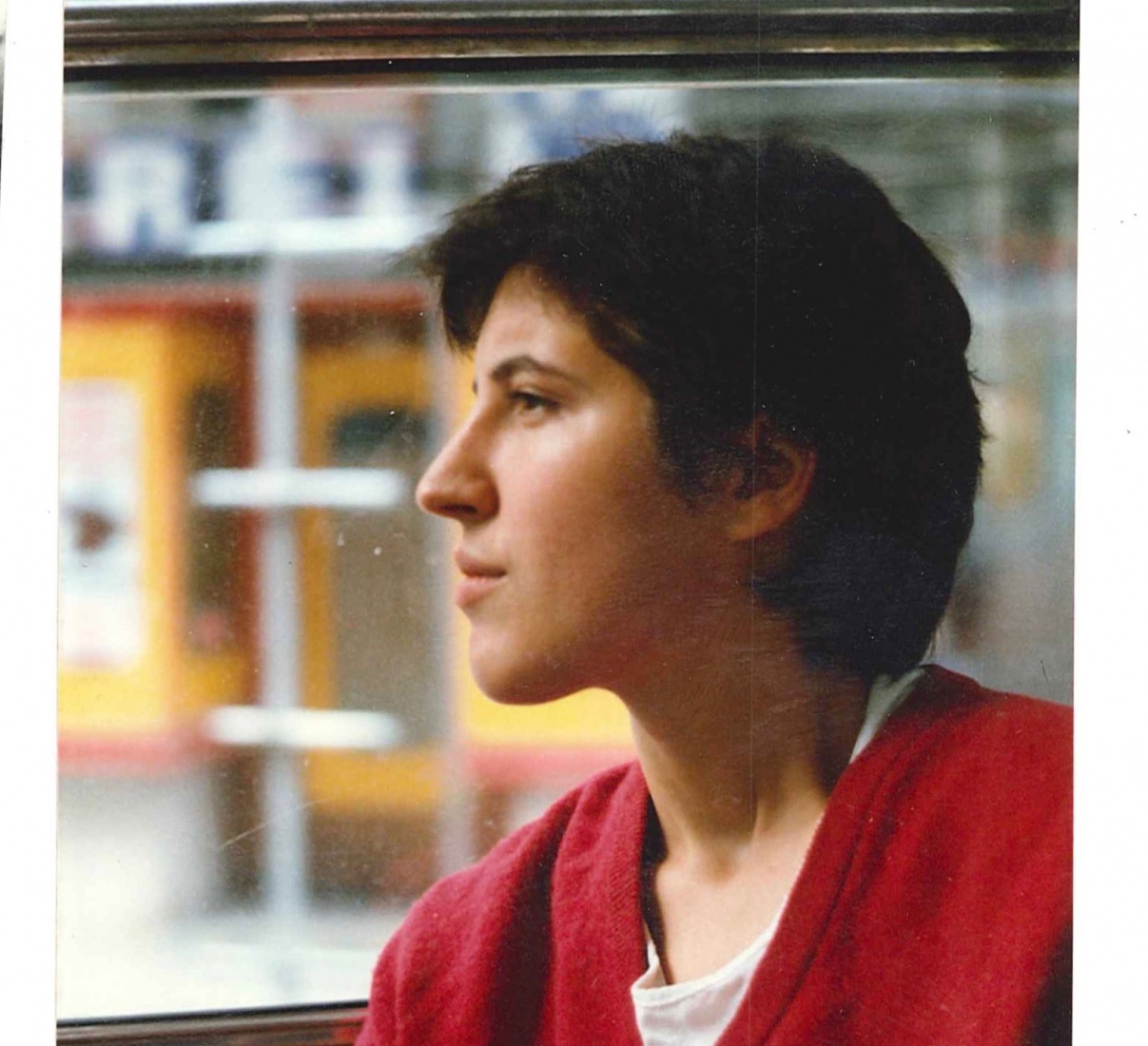 Delia, my co-traveler for that crazy weekend in Bucharest. Photo by Mark Baker.

One of my earliest trips to Romania took place years before I ever became a travel writer. It was 1990 and I was living in Vienna at the time.

I was working as a reporter for a small research and publishing company owned by Britain’s “The Economist” group called "Business International." My job was to analyze what was happening in Eastern Europe and to recommend how our readers – mainly large multinational corporations – could take advantage of the recent political upheavals.

I was the office’s “expert” on Czechoslovakia, though I was still pretty naïve at that time. The “Velvet Revolution” that overturned Communism in that country had taken place only a few months earlier, in November 1989, though I have to admit I'd largely failed to see it coming. Romania’s revolution a month later in December -- that led to the arrest and execution of dictator Nicolae Ceaușescu and his wife Elena -- was, if anything, even more dramatic and unanticipated.

Indeed, looking back on those days from 30 years ago now, almost no one had foreseen the domino-like fall of Communism throughout Eastern Europe in 1989. That fact imparted a sense of awe over the unfolding of history that we were all feeling.

By the spring of 1990, the whole region, including Romania, was now considered to be “safely democratic.” Indeed, the future was looking pretty good, and even the weather was starting to cooperate. My girlfriend at the time, Delia, suggested we take a trip somewhere to relax over a long weekend. We looked through a list of cheap flights from Vienna and opted for Romanian airline Tarom’s service to Bucharest.

It was a relatively exotic choice, as very few tourists were yet traveling to Romania. We reasoned that we had spent so much time writing about the anti-Communist revolutions that it was time to pay a visit to the region and see how they were progressing. Besides, we thought, Bucharest must be lovely in springtime. Our departure date was set for Wednesday, June 13.

We knew something had gone wrong the moment our plane touched down at Bucharest’s Otopeni airport around 10pm that evening. I don’t recall many non-Romanians being on the flight, and the border guard glanced at our foreign passports with a worried look. He asked us where we were staying and we told him we’d booked a room at the Intercontinental Hotel in the center. The rest of the dialogue went something like this:

Border control guy: “The Intercontinental? You cannot go there.”

Us: “Huh? Why not? We have a reservation there.”

Border control: “They are shooting there.”

Delia and I quickly figured out there was some type of armed skirmish underway in central Bucharest, though we had no idea what was happening. We quickly arranged alternate accommodation at what was then called the Park Hotel, outside the center. It was the start of what would turn out to be one of the oddest weekends of my life. 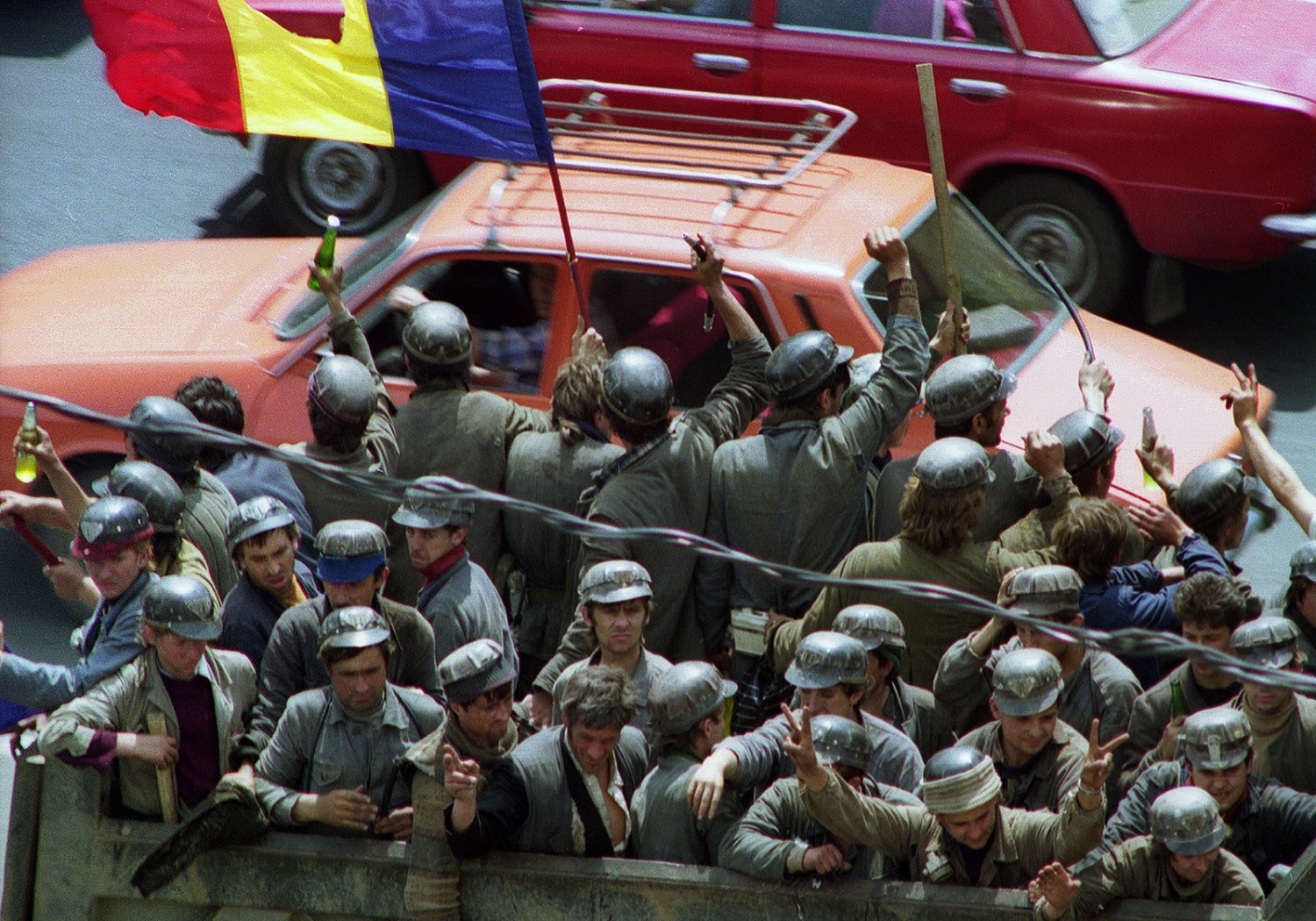 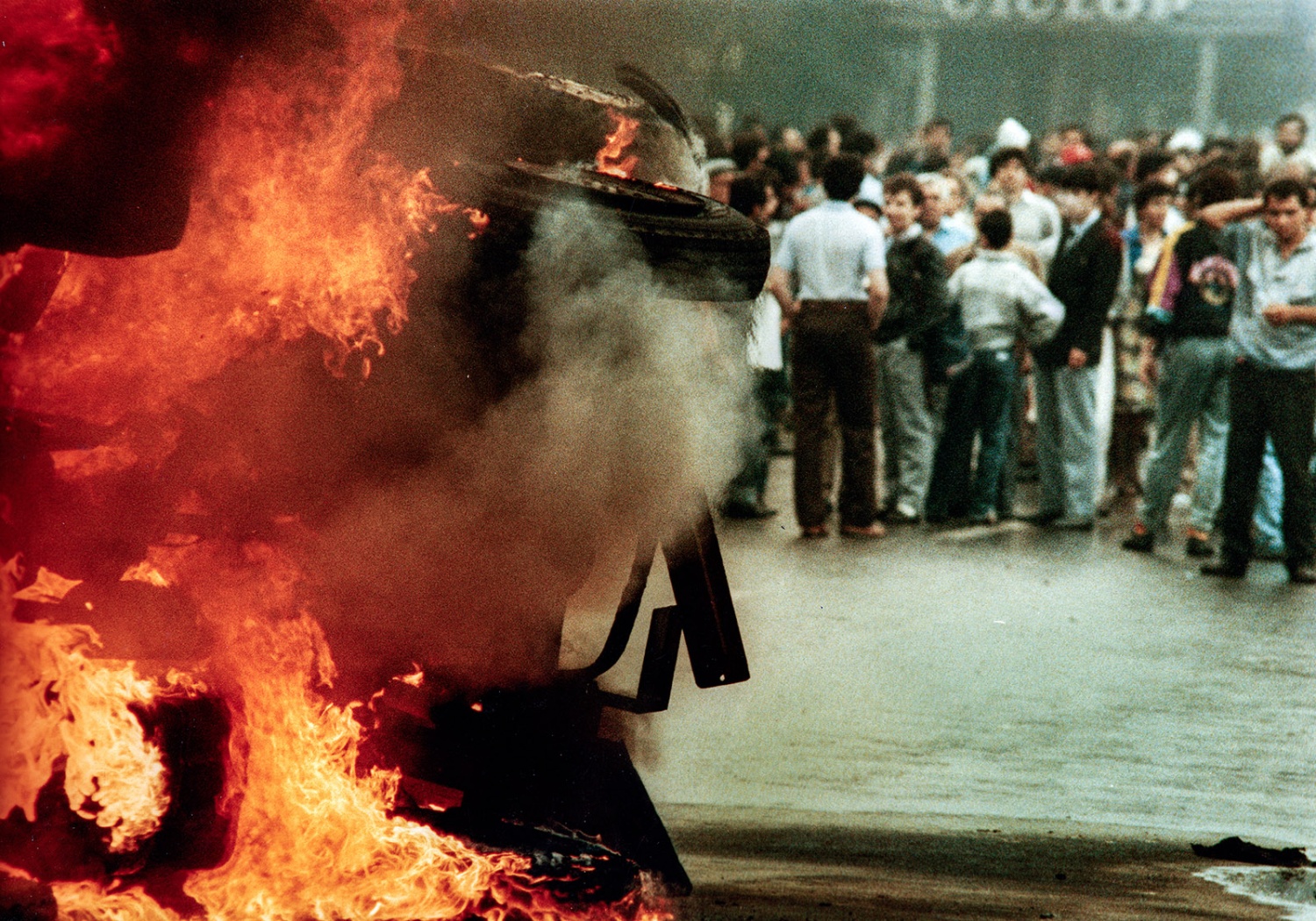 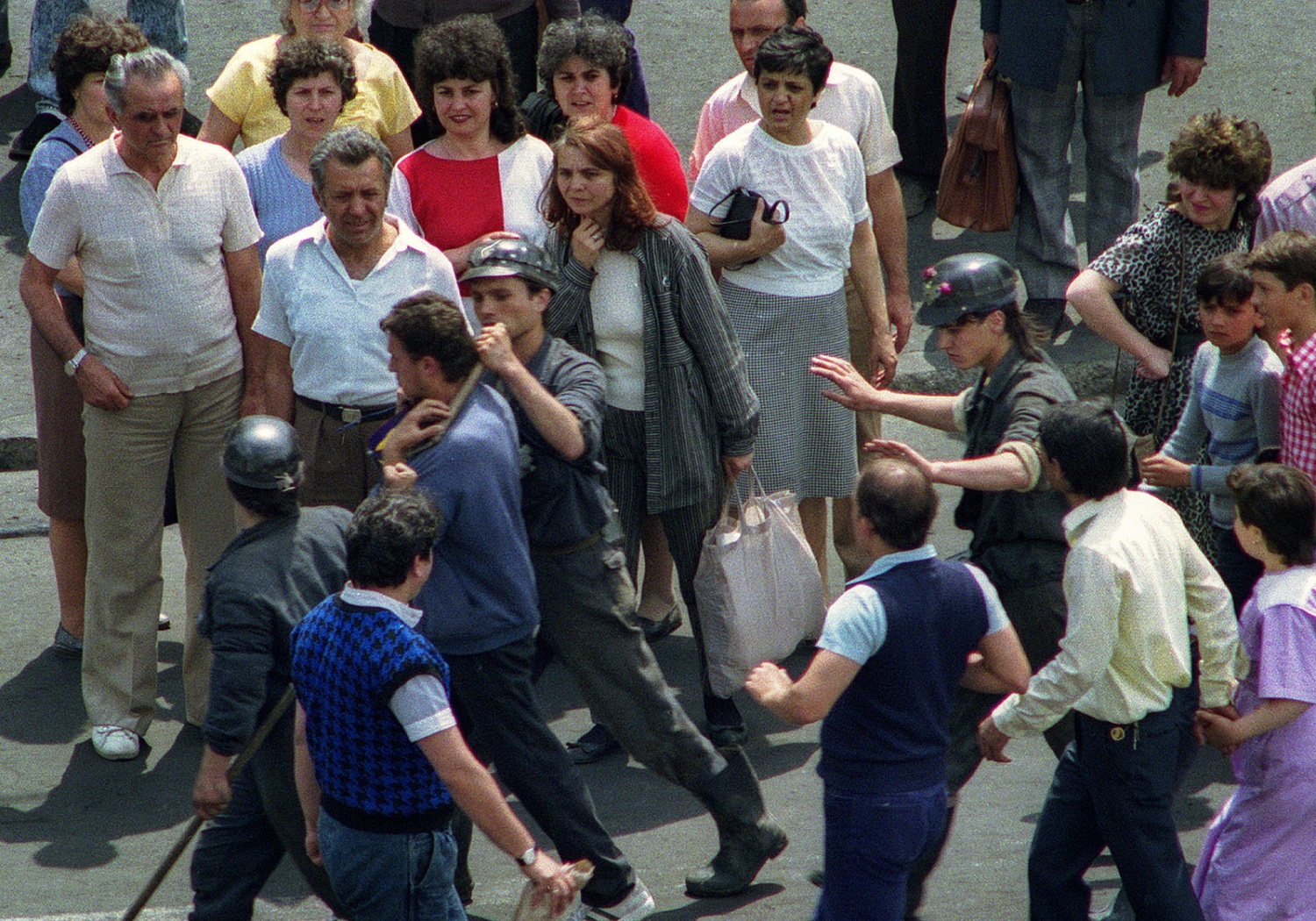 Over the next couple of days, we came to realize that we had blundered our way into what Romanians now call the “Mineriadă,” several days of brutal street violence that pitted the government and police against pro-democracy protesters and students unhappy over the pace of reform. The name refers to the hundreds (maybe thousands?) of coal miners from the faraway Jiu Valley whom the government had foolishly called in to knock some students’ heads around and assert control over the situation.

In the end, as many as 100 people may have been killed and several hundred wounded over that bloody weekend. There were even rumors that elements of the Securitate, the Romanian secret police, had infiltrated the miners. We had picked a great spot for our holiday.

The details are fuzzy now, many years later, though the highlights still stand out in my mind. That first morning, we walked into town from our hotel and passed through police lines near University Square -- the center of the action. The city was on edge as people awaited the arrival of the miners and anticipated what would happen when they got there. (You can see the drama that unfolded from the photos for this post provided by Andrei Iliescu, a Romanian news photographer who was working that weekend.)

I recall that there was blood pretty much everywhere and plenty of violence to witness. I saw students – many of whom looked a lot like me at the time -- get their heads clubbed in by miners and police. Others were shouting protest slogans in a language I didn’t understand.

After spending the morning surveying the carnage and dodging police truncheons, we walked across the city through crowds of cops and demonstrators to eat lunch at the famed “Hanu' lui Manuc” restaurant. Despite the war-zone setting, the restaurant was buzzing and the food surprisingly decent. There was a feeling of heightened anticipation and concern in the air, though no one appeared to be overly stressed. The waiters went about their business. I recall them being uncharacteristically attentive.

Over a plate of what was probably sarmale cu mămăligă (Romanian-style cabbage rolls and polenta), Delia and I discussed what to do next. We’d heard rumors that flights in and out of Bucharest that weekend were being cancelled, and it wasn’t clear we’d be able to fly out on Sunday to return to Vienna as we’d planned. 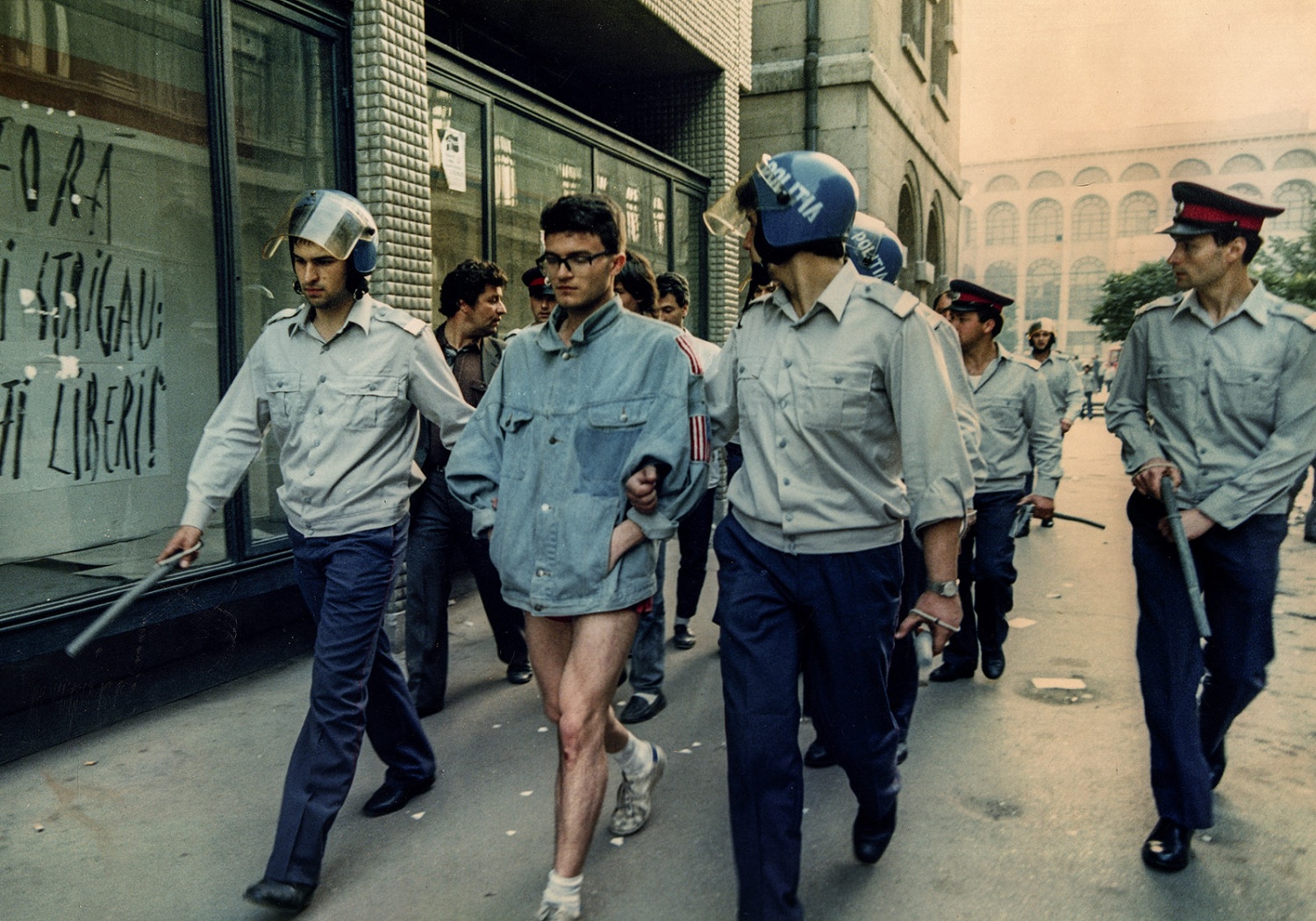 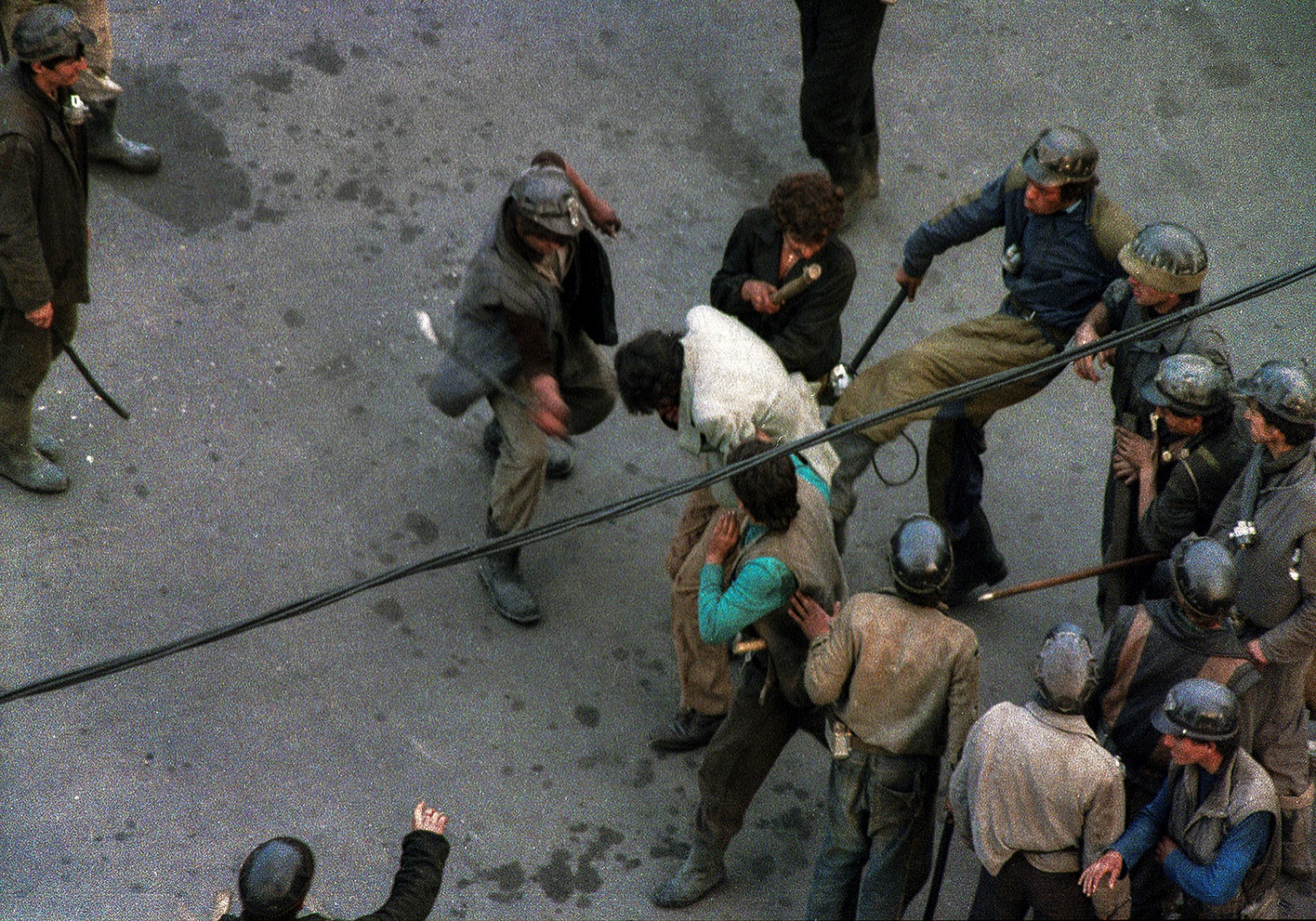 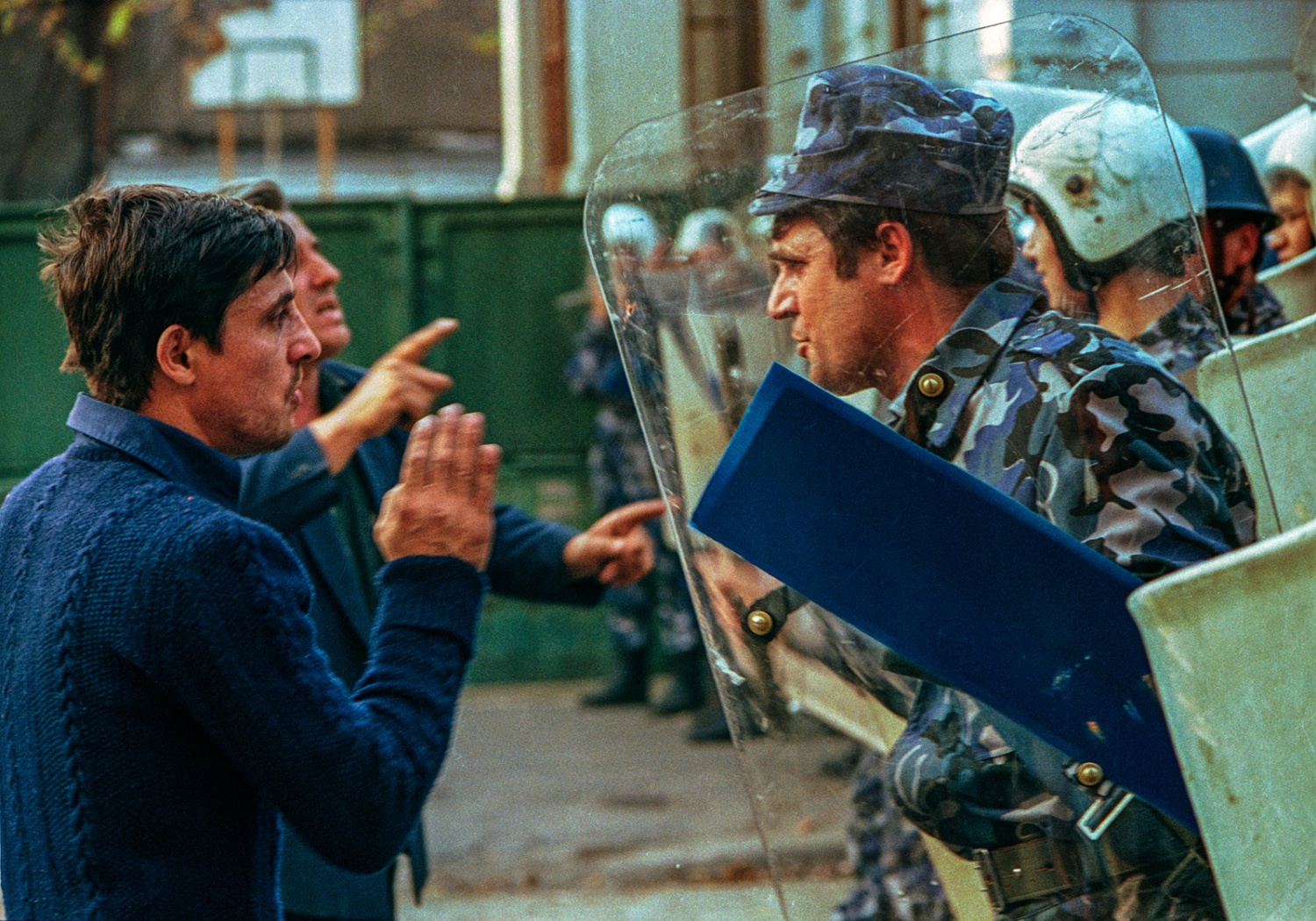 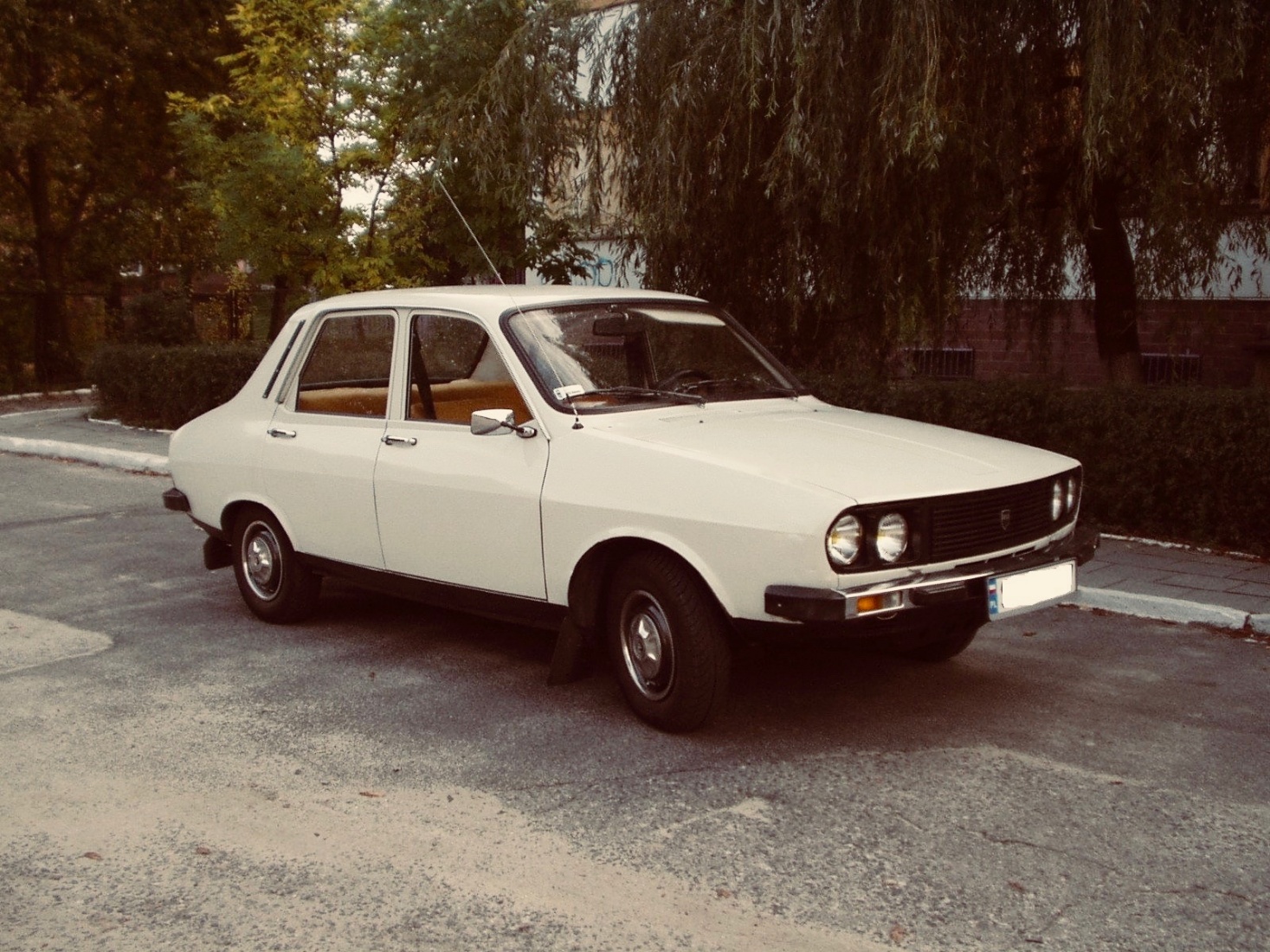 File photo of a vintage Dacia from around the time that Delia and I rented ours for the escape from Bucharest.

At about that point, we came up with the idea to rent a car and drive back. The plan was to take the car as far west as the Romanian border city of Timişoara, about 550 kilometers (340 miles) away, and then hop a train from there to Belgrade. Trains from Belgrade back to Vienna at the time were relatively frequent, and we knew once we were in (then relatively peaceful) Serbia, we’d find our way back home.

We found a taxi near University Square and asked the driver to take us to a nearby car-rental agency. We’d only driven a few hundred meters when a group of miners – dressed in greasepaint and holding lead pipes – stopped the taxi to ask for identification. Our driver rolled down his window and told the head miner that two foreigners were in the back seat and that they were leaving the scene. Imagine our surprise, then, when the head miner turned to us and asked – in very good English -- to see our passports. Maybe those rumors of the Securitate being involved weren’t so far-fetched after all?

The rest of the trip is a blur. The next morning, Friday, we set out in our newly hired Dacia 1310 en route to Timişoara (I posted a picture here of a car that looked a lot like ours). As anyone who’s ever done that drive can tell you, it’s no picnic. We stopped somewhere around the halfway point for the night and arrived in Timişoara on Saturday evening. Once in town, we paid our respects to the church of László Tőkés. He’s the dissident ethnic-Hungarian pastor who's credited with igniting the Romanian revolution in December 1989 that would ultimately cost Ceaușescu his job and his life. Afterward, we found a cheap hotel and settled in for the night.

On Sunday, we were up at the crack of dawn and bought two tickets for the early-morning train to Belgrade. The stars were in alignment on that leg of the journey. Once we arrived in the Serbian capital, the express train to Vienna was leaving in a couple of hours. We bought two tickets to Vienna with the last remaining dollars (or Austrian schillings) that we were carrying.

I can’t remember ever being so happy to be back in sleepy, boring, bourgeois Vienna as our train pulled into the old Südbahnhof on Sunday evening. Back in the office Monday morning, I poured over the front page of the “Financial Times,” reading up on all the violence taking place in faraway Bucharest.

(This story was originally published in 2017) 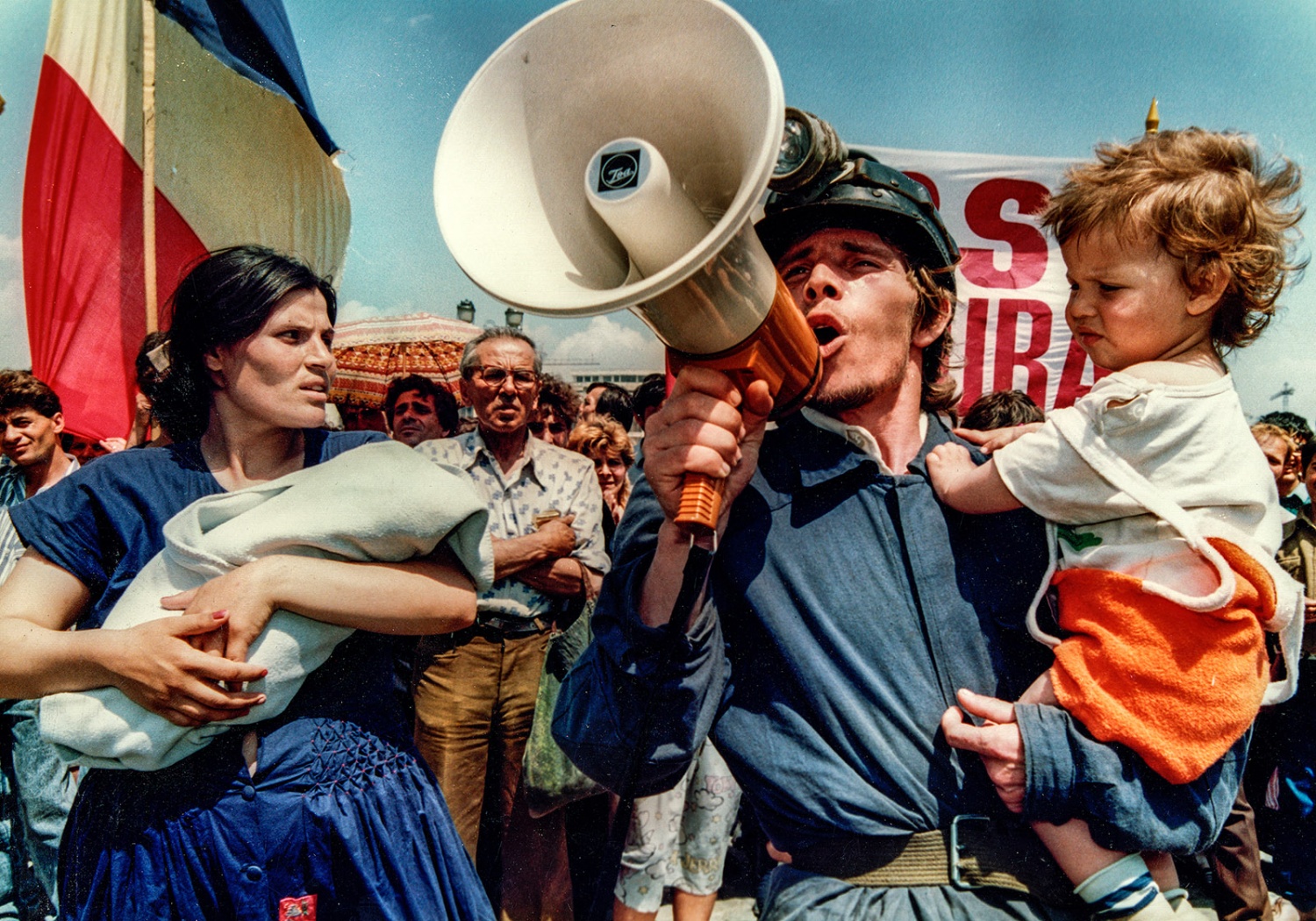 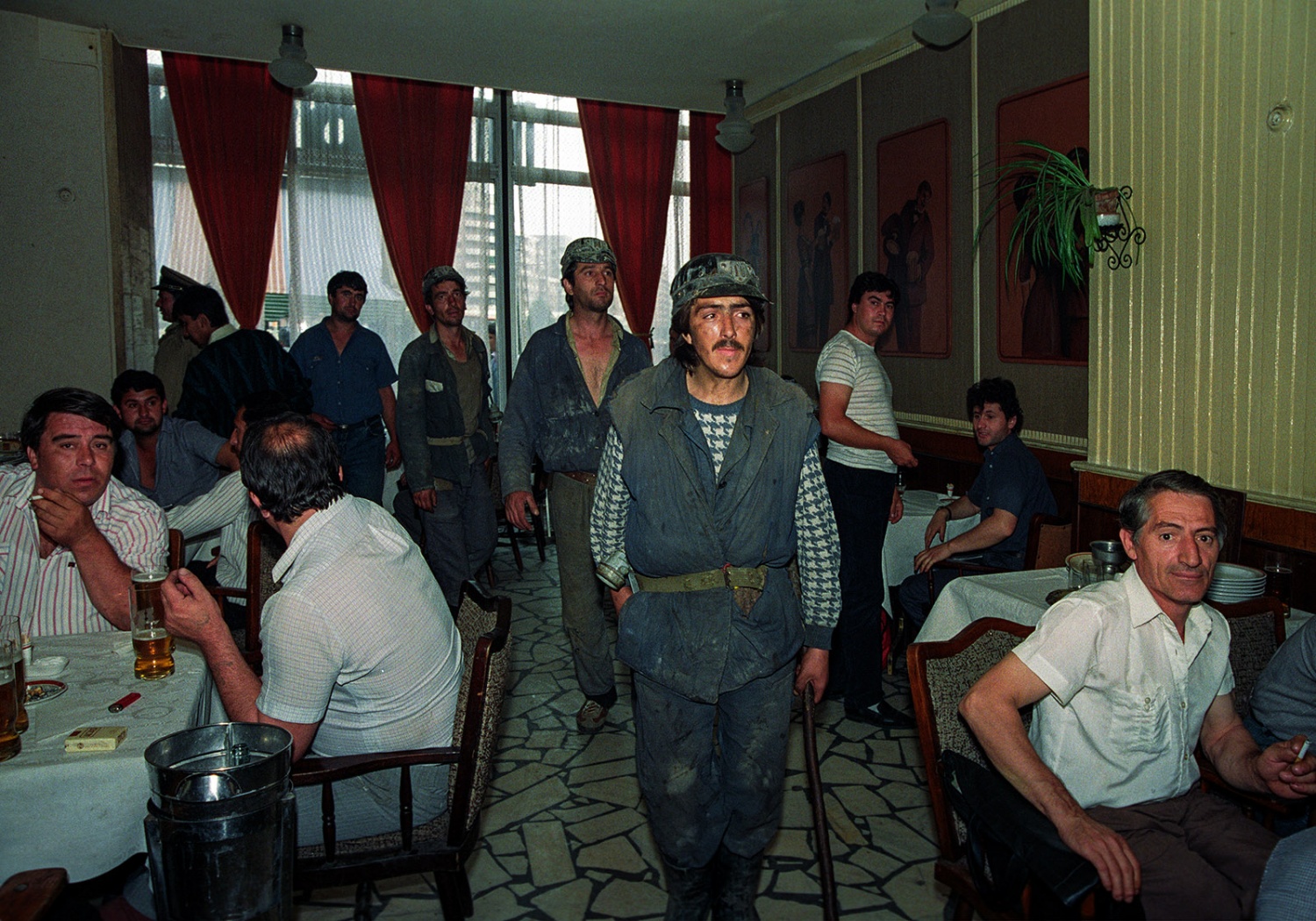 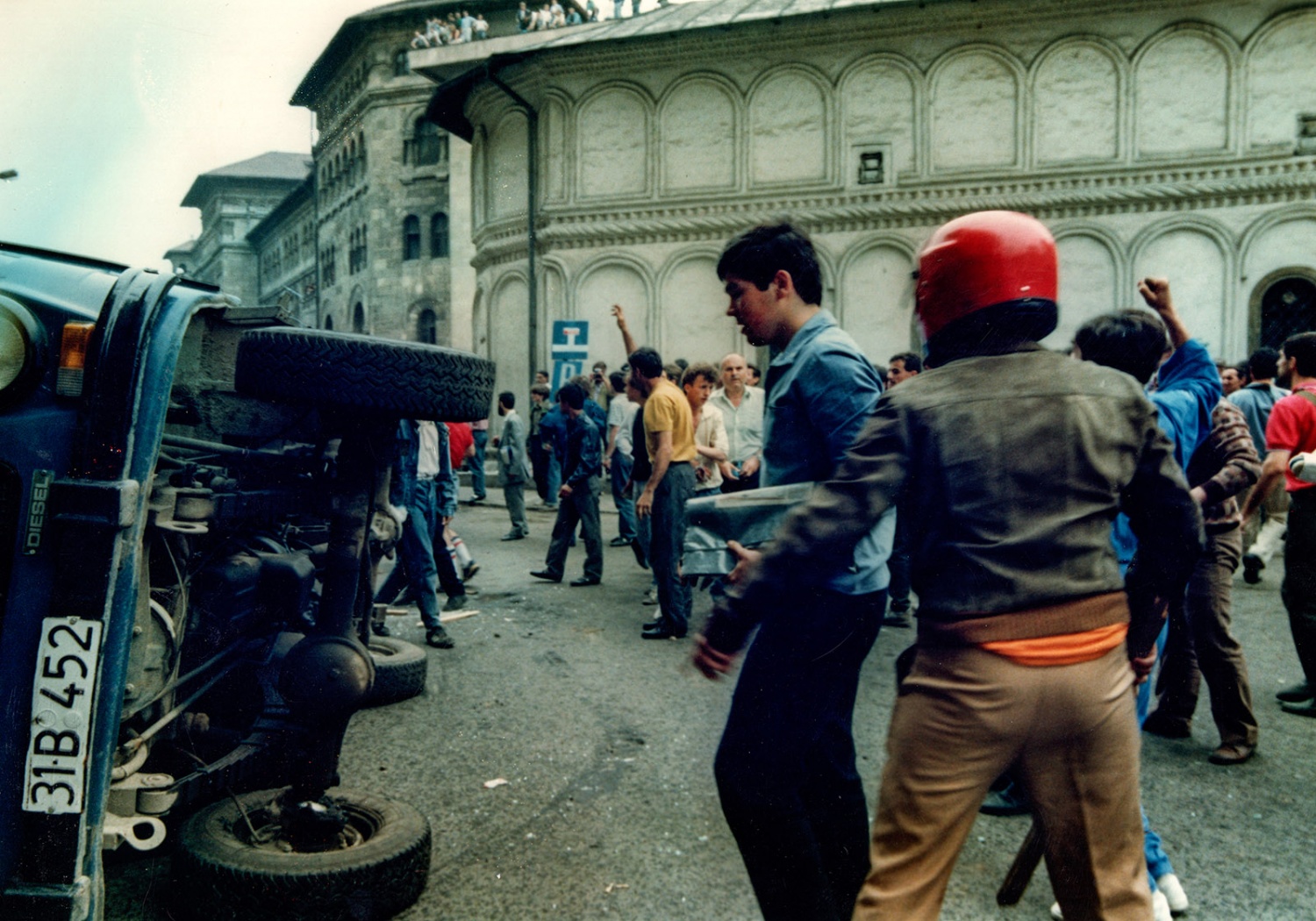 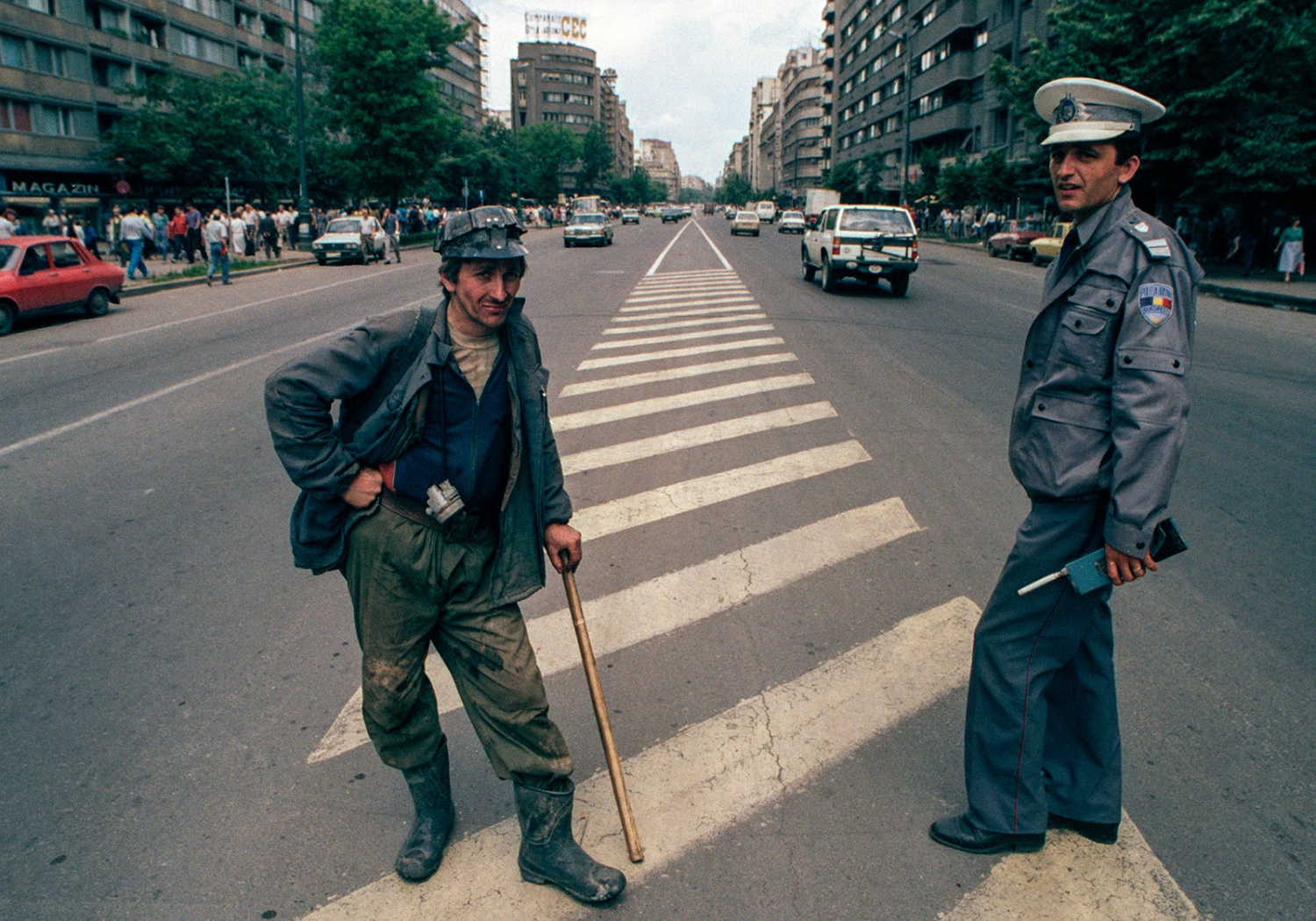 Posted in On The Road, Tales From The Past and tagged 1989, Bucharest, mineriada, miners, revolution, Romania, Timisoara.