The fall of communism, 30 years ago this year, brought a lot of great things to Prague, but one thing left out of the deal has been decent grocery stores. Sure, those old communist-run food outlets ("potraviny"), with their inedible canned-pork products and milk sold in plastic bags, are mostly gone, but the city remains hostage to a handful of mediocre foreign chains (I’m looking at you Kaufland, Billa and Albert). The Kaufland near me is a warehouse of bottled water, boxed dumpling mix and rotting onions. Of course, I’m exaggerating, but those brave Velvet Revolution protesters in 1989 weren’t shaking their keys for this.

When the upscale British retailer Marks & Spencer opened a small chain of food stores around town a few years ago, it changed my life. Each week, I drop a frighteningly high percentage of my income on their foods with their fancy labels. All the more ironic, then, when my beloved "Marks & Sparks" held me (briefly) in custody, as it were, a few weeks ago on suspicion of purloining a sirloin. Here's how it all went down: 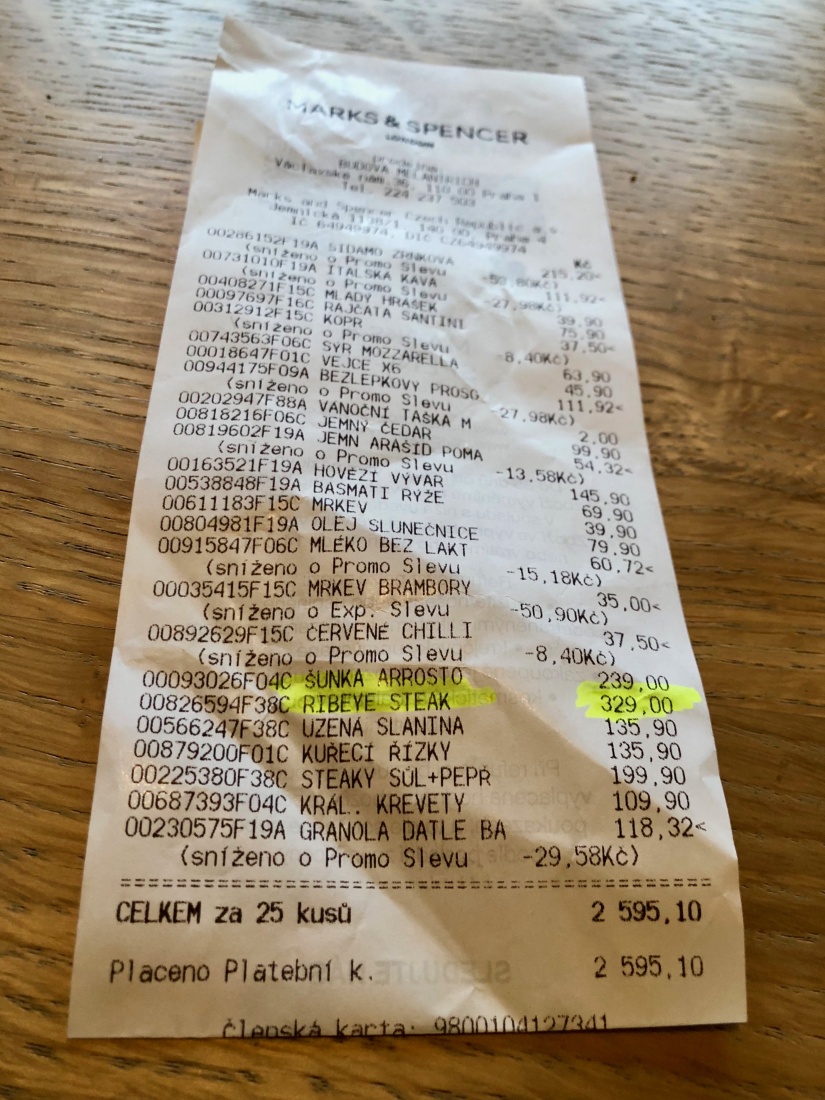 There’s the offending "Ribeye Steak" on the receipt. For those keeping score at home, the price, 329 crowns, is a not-insignificant $16 for a relatively small slab of meat. Photo by Mark Baker. 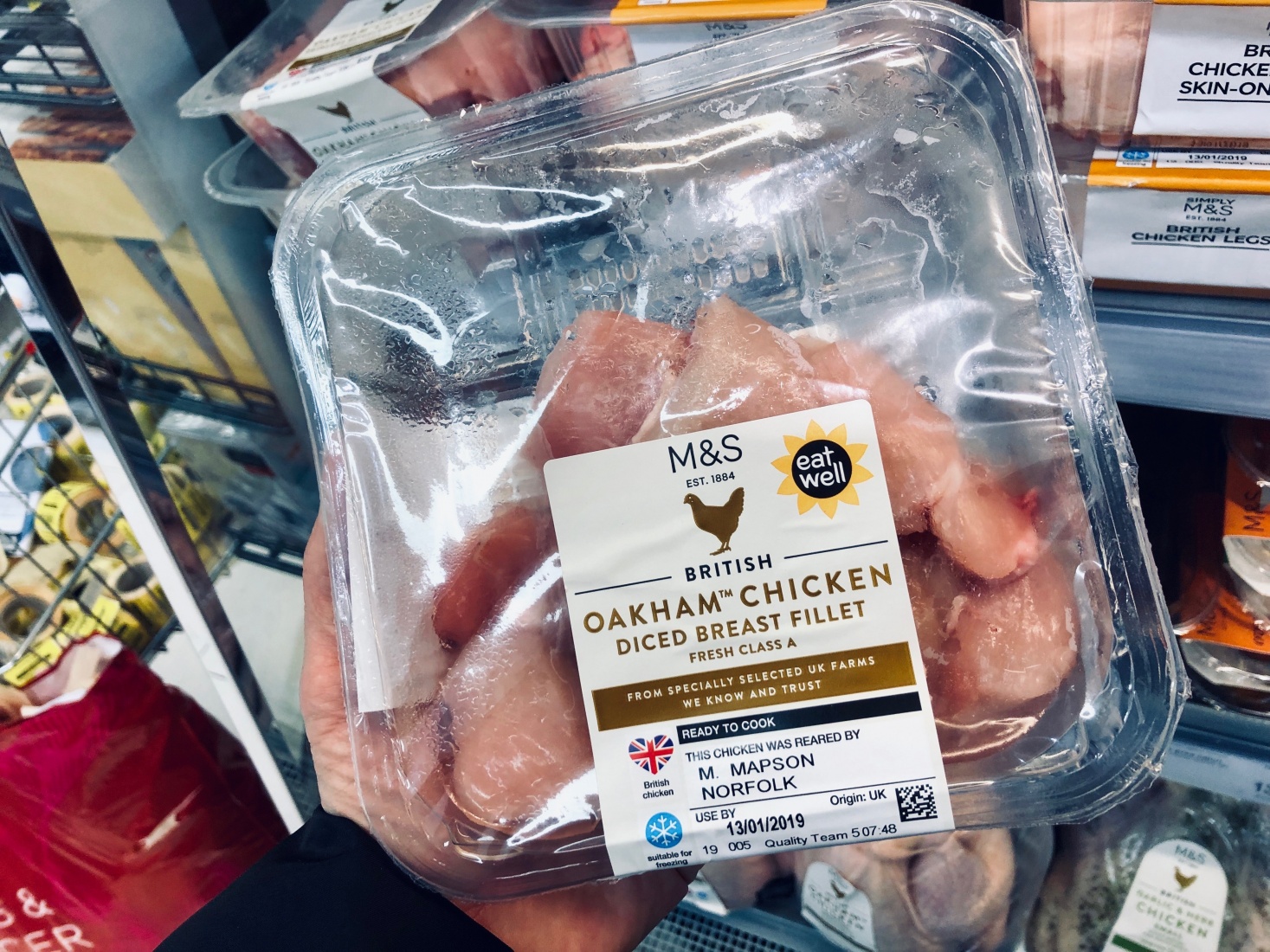 Beware chicken thieves :) Marks & Spencer obviously chips the chickens -- a fact I learned as the guards waved my chicken breast though the security barrier to see if it set off the alarm. Photo by Mark Baker.

It was a typical lazy Sunday afternoon. I was sitting in my apartment and thinking about dinner. I suddenly felt that familiar light-bulb moment:  “Hey, Marks & Spencer is open on Sunday,” my mind started telling me. “Why not head down to the Wenceslas Square branch and rustle up some grub?” Not a bad idea!

And so it was that I took the metro downtown, entered the store, grabbed a basket and proceeded to walk with lustful eyes through the shiny aisles. I was in one of those “to hell it with” moods where I simply stick anything into the basket that catches my eye without looking at the price. Some of that "Chunky Layered Moroccan Style Houmous"? Yep! How about a little "Sweet and Tender British Baby Beetroot"? You got it!

At Marks & Spencer those moods can be particularly dangerous. I can walk around my neighborhood Kaufland -- a culinary wasteland carved literally from the carcass of a disused public bus depot -- for an hour and still not wrack up a bill over 2,000 crowns (about $100). At M&S I can blow through $100 in 10 minutes. 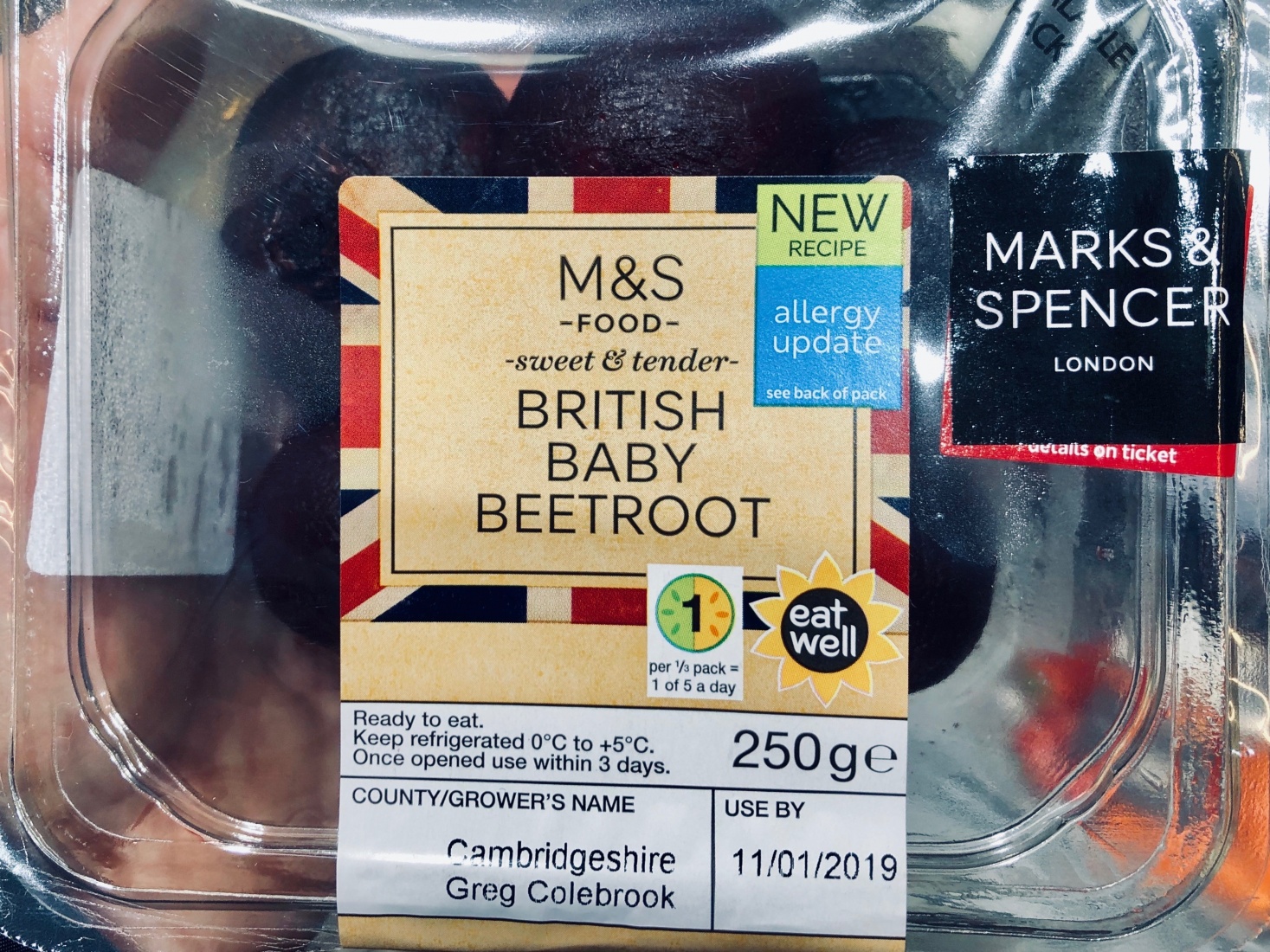 Where would my Prague life be without M&S British Baby Beetroot? Alas, I now realize they pay more attention to the beets than to the customers. Photo by Mark Baker. 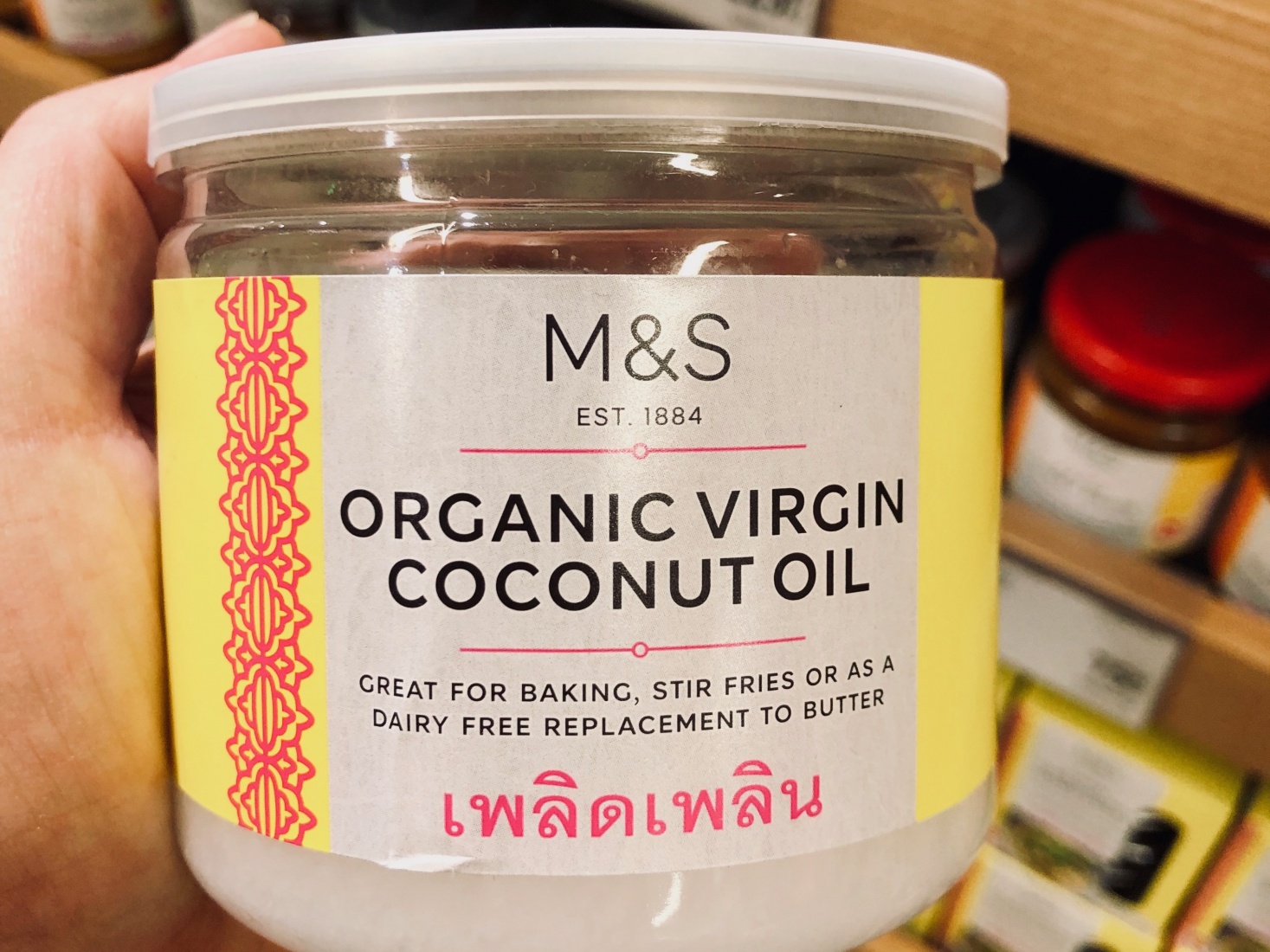 I confess, sometimes I walk around the store simply to gawk at the labels. They're so different from any other place in town. Photo by Mark Baker.

The first sign that everything was not going according to plan came as I brought my overstuffed basket to the register to pay. As anyone who’s ever shopped at one of our local Marks & Spencers knows, in addition to toting up the damage, the cashiers also meticulously pack your bags (as carefully as if they were sending off their six-year-old to his or her first day at school). This elaborate packing ritual is so mind blowingly over the top in Prague -- where it would never ordinarily occur to a cashier to help you pack -- that it almost justifies the higher prices all by itself.

I’d unfortunately brought my own bag -- a bright red “Kaufland” bag as it turns out -- with me on this trip. The cashier gave the bag (and me) the once over and was obviously not impressed. She told me she wouldn’t be able to pack my bag on this visit, and instead ran the items through the scanner and handed them back to me one-by-one. I wasn’t sure why she wouldn't do the packing thing, but this was no big deal. I was a little surprised, though, and so apparently was everyone else as they stood around staring. (I later learned this was for "hygiene" reasons when customers brings their own bags into the store -- okay got it!).

I paid the bill, placed the receipt at the top of the bag, and proceeded down the escalator to leave the store. I was already dreaming of what I was going to make from the bounty when the store’s blaring anti-theft alarm pulled me out of my reverie. Apparently, something in my bag had set the bells off. I stood there like a deer in the headlights not quite knowing whether to ignore it and keep walking or stop and wait on the guard.

I was pretty sure I hadn’t stolen anything, so I stood there to face the music. 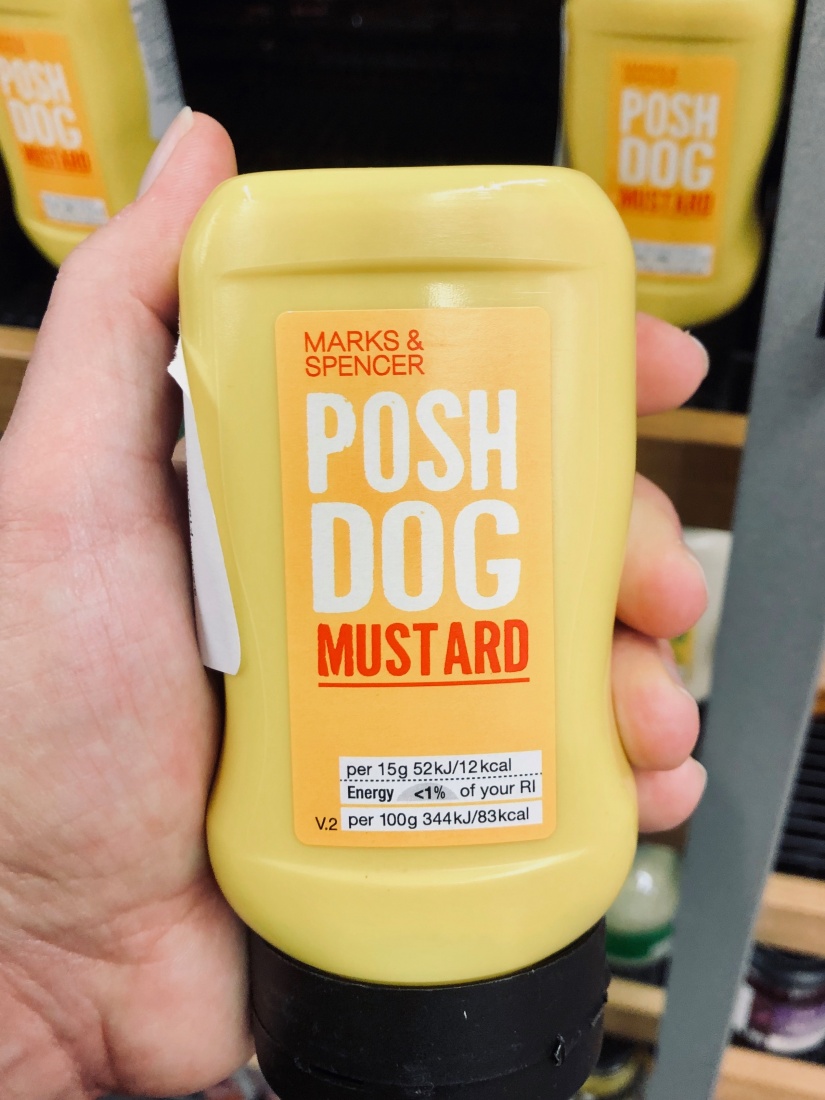 At Marks & Spencer, "Posh Dogs" go up against the lowly Czech párek (hot dog), and guess who wins? Photo by Mark Baker. 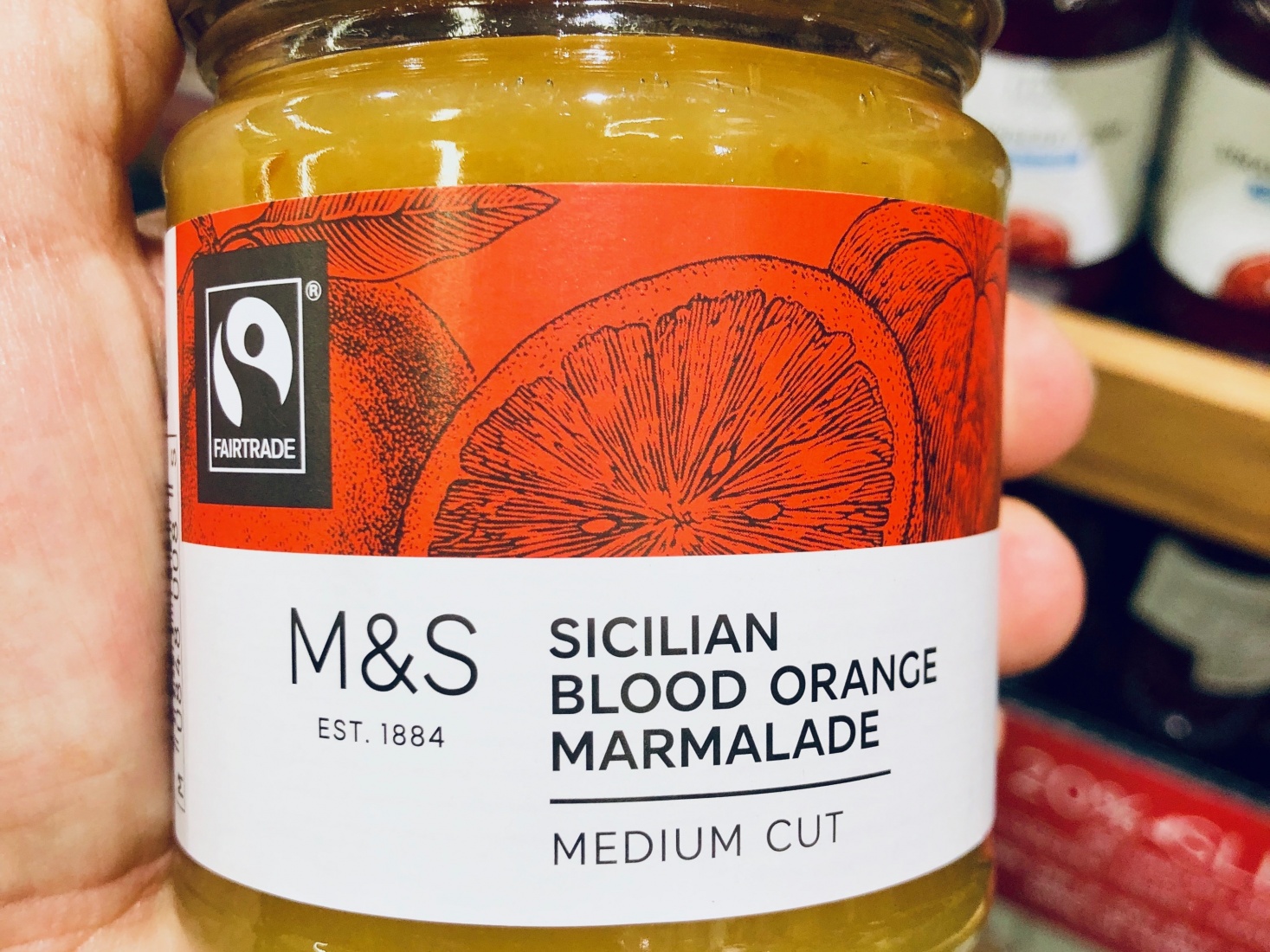 The prospect of "Sicilian blood" orange marmalade always makes me think of Mafia hits in Palermo for some reason. Photo by Mark Baker.

A few seconds later, I was surrounded by security guards, who greeted me politely but sternly. They then proceeded to extract and grope every item, one-by-one, in my bag. In my mind's eye, I can still see one of the guards pull out a chicken breast and pass it through the door to see if it set off the alarm (all clear!). A heads-up to any chicken thieves out there: They obviously chip the chickens.

Finally, after going through and testing everything, they located the problem. "Aha! The hovězí steak!" (a rib-eye actually). The cashier had apparently forgotten to remove an anti-theft chip stuck in the packaging (maybe she really did hate that Kaufland bag?)

One of the guards looked at me warily, “Now, let's see if it's on the receipt!,” he said. There were several items on that list and it took the guys a good fifteen minutes to go through it (again and again about 10 times in all). The main guard, probably somewhere in his late-50s or early-60s, kept having to adjust his glasses in order to read the small print. At this point, I started to feel a little bad for them. This can't be a fun job.

For some reason, the guards couldn’t find the steak on the list and I started to doubt too if it was actually there. (Maybe I really did steal a steak and just forgot?). It was probably the fact that it was marked on the receipt in English as "Ribeye Steak," but the actual item was labelled in Czech as "Hovězí Steak."

I wasn’t in any particular hurry and had no place to go, so I just stood there with an embarrassed, bemused look on my face. People coming in and leaving the store gave me the hard stare (Aha! A guilty shoplifter had gotten his just desserts!) Eyeball-shaming is an art form in this town -- like when you see someone get caught on the tram without a valid ticket. I'd have done exactly the same thing.

Finally, we all proceeded to the back room, where after another short wait the manager on duty could go through the receipt once again, item by item, with a fine-tooth comb. Ultimately, she found the steak on the list. “There it is! He paid for it!”

The guards quickly and efficiently returned the items, including the steak, to my bag (so this is what you have to do to get Marks & Spencer to pack your bags these days?) and wished me a pleasant day. After a delay of a little more than 30 minutes, I walked out of the store a free man. 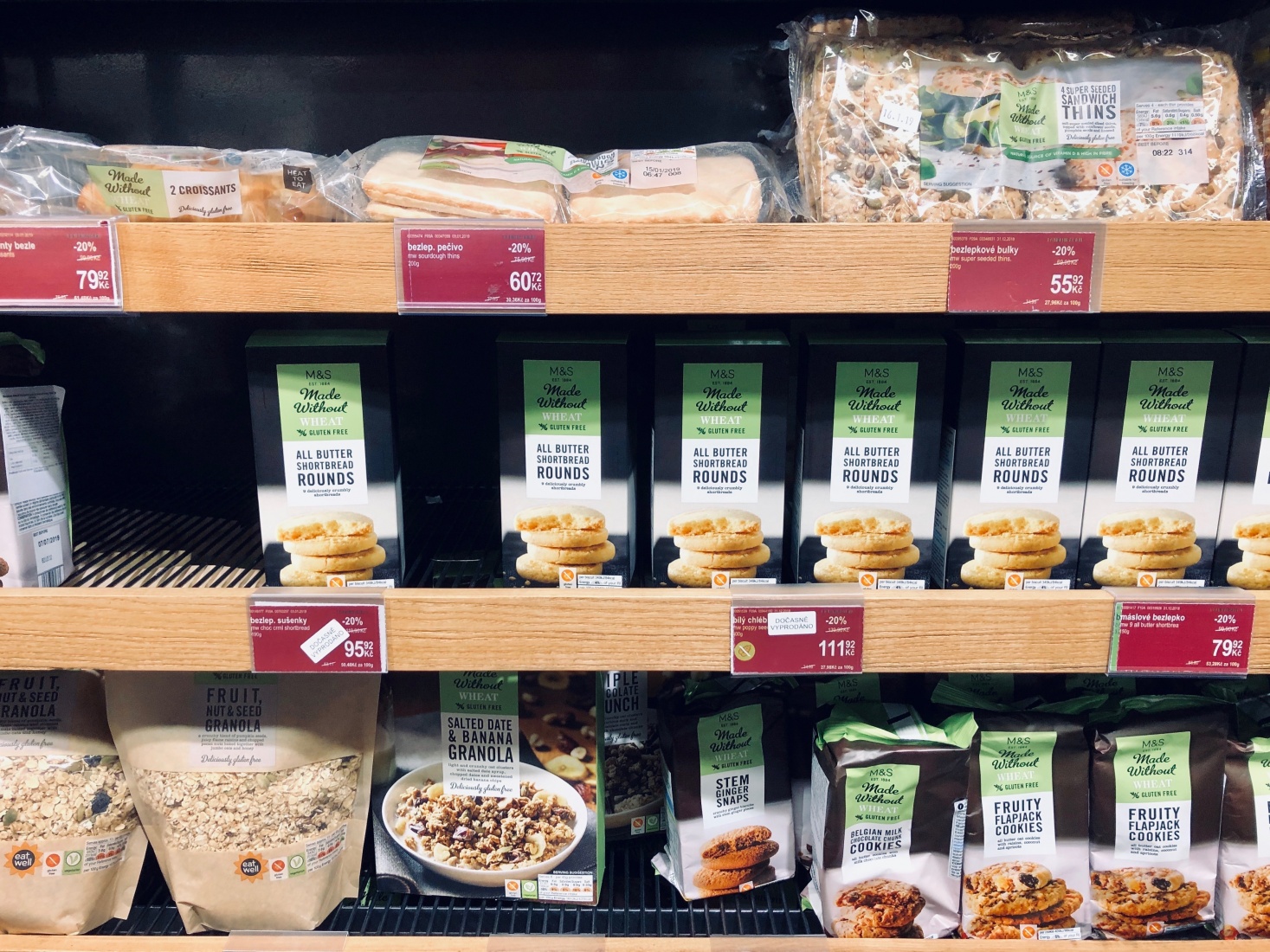 One of the big changes brought in by Marks & Spencer was to highlight gluten-free products. A loaf of GF bread costs 120 crowns ($6), three times the normal price, but hey it's the thought that counts! Photo by Mark Baker. 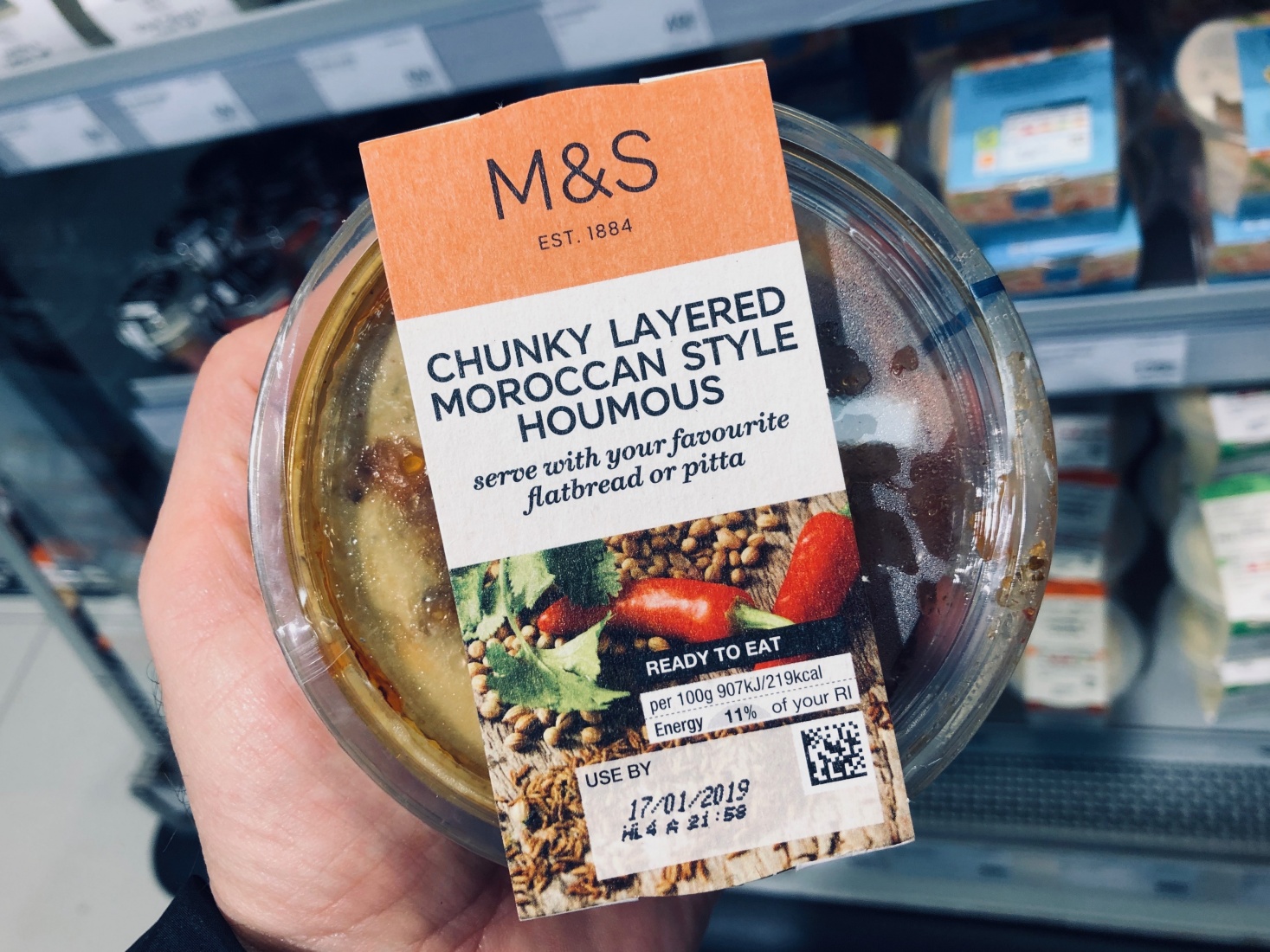 "Chunky”? “Layered”? "Moroccan-Style"?? Whoever writes the labels at Marks & Spencer obviously has never met an adjective he or she didn't like. And that's fine with me! Photo by Mark Baker.

All of this would have been quickly forgotten and never would have made it into my blog if it wasn’t for the rather cold, unsympathetic reply I got from a Marks & Spencer service rep, in response to a complaint email I sent the next day.

I made a resolution this year that I’m going to give feedback regularly when I feel something isn’t right. I’ll never write a nasty or angry letter, but simply state the facts as I see them and suggest ways I think a situation could have been better handled.

In my complaint, I pointed out I understood the need for security and the guards were professional and polite. I also pointed out, though, that I was a regular customer and had purchased over 2,500 crowns ($120 worth) of groceries on that particular trip. I wasn’t going to steal a piece of steak or a chicken breast.

I could have also added “BTW, I’m your greatest fan ever in Prague!” but I figured they’d find that out once they looked at my customer-loyalty card and saw the pathetically long string of purchases I'd made the past year. Well, anyway, I was disappointed by the response, part of which I include here:

“It's a shame the till didn't deactivate the security tag on your steak and I'm pleased to hear the staff in store were able to identify which item it was and remove the tag. I've spoken with the management team in store so they can look into the matter further and I'd like to assure you, they'll take appropriate action if they feel the highest level of service isn't being provided.”

Despite their assurances, that email left me under-assured. It was a modern, corporate take (30 years after the Velvet Revolution) on the classic, communist-era "bohužel" -- an all-too familiar Czech word that translates literally as "unfortunately," but often strikes the ears more like: "Hey dude, not our problem." At M&S, they obviously put more effort into those baby beetroots than they do customer emails.

No harm, no foul, right? I'd love to have gotten a little gift voucher and a cheerful "we value your business!" response, but the guards were just doing their job and didn't know me from Adam, as they say. And let's be real. Until the guys over at Kaufland step up their game, the good people at Marks & Spencer know very well I’ll be back for more of that Moroccan-style houmous -- and probably very soon!