Books have a special place in my heart – even if I don’t read as much as I used to. I put the blame on social media, but of course that's an excuse. As readers of this blog will know, I once co-owned a bookstore, The Globe, which was both a dream job and a bit of a nightmare (owning a business, even one you love, is no walk in the park). Bookstores play a huge part in the lives of cities (try thinking of a great city without also thinking of a great bookstore), yet the Internet appears to be slowly killing off this most civilizing of institutions.

Last year, I received a message that one of my favorite bookstores anywhere, and my candidate for the best English-language bookstore in Eastern Europe, Bucharest’s “Anthony Frost,” was closing for good after more than nine years in operation. Just another sad story, I thought. Yet, this tale appears to have had a sequel. On my most recent trip to Bucharest, I discovered that “Tony” had reopened, and the future looks brighter than anyone might have hoped.

Top Photo: A day in the life of a reborn bookshop. The counter at Cărturești & Friends -- the successor to one of Central & Eastern Europe's great English-language bookshops: Anthony Frost. Photo by Mark Baker.
Posted in Diversions, On The Road and tagged Anthony Frost, Books, bookstores, Bucharest, Carturesti, English books, literature, Romania.
Add a comment 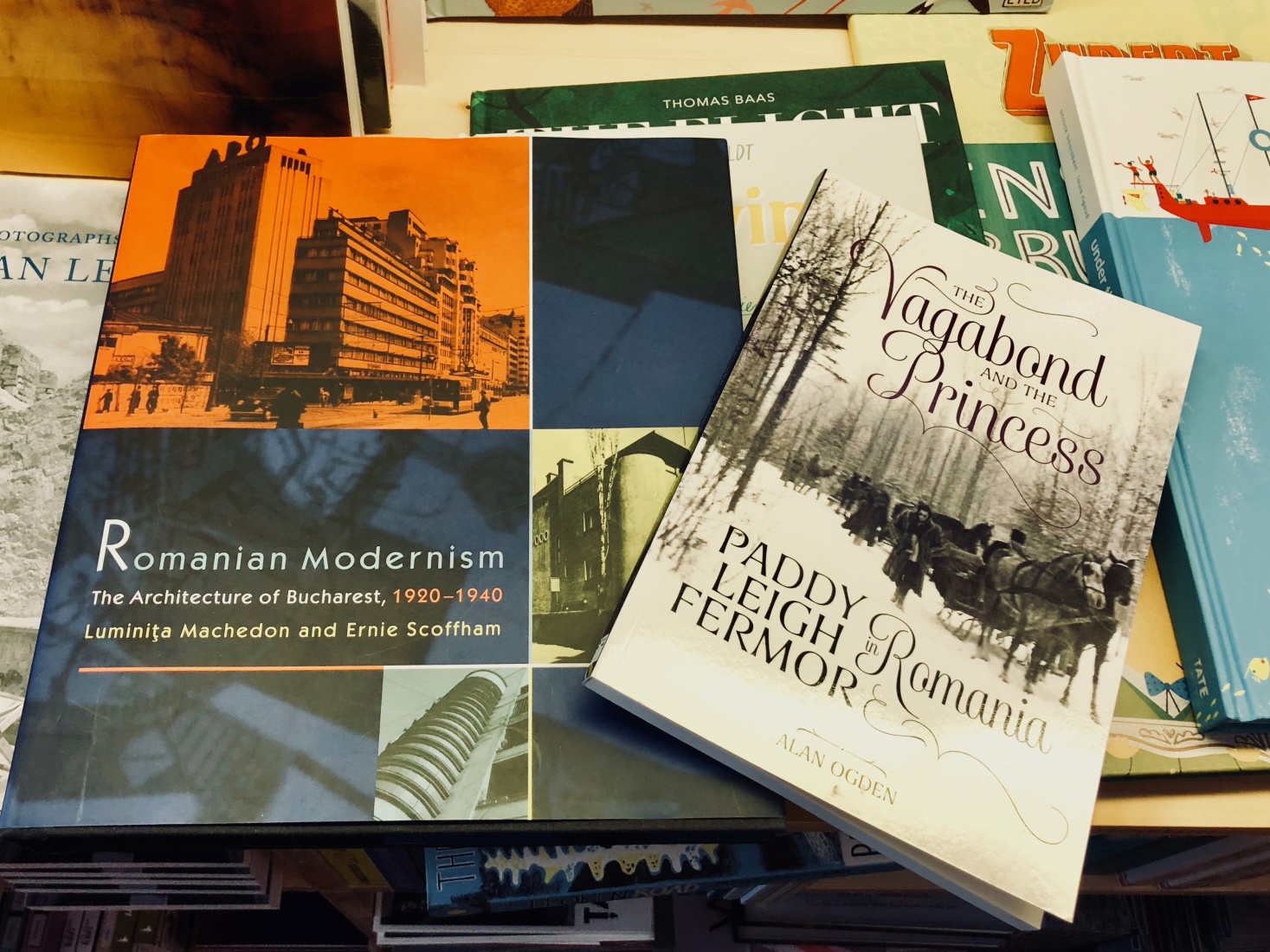 The joy of a good bookshop is never knowing what you're going to come out of there with. On this visit, a bit of Romanian Modernism and a tribute to Patrick Leigh Fermor's 'Between the Woods & the Water.' Photo by Mark Baker. 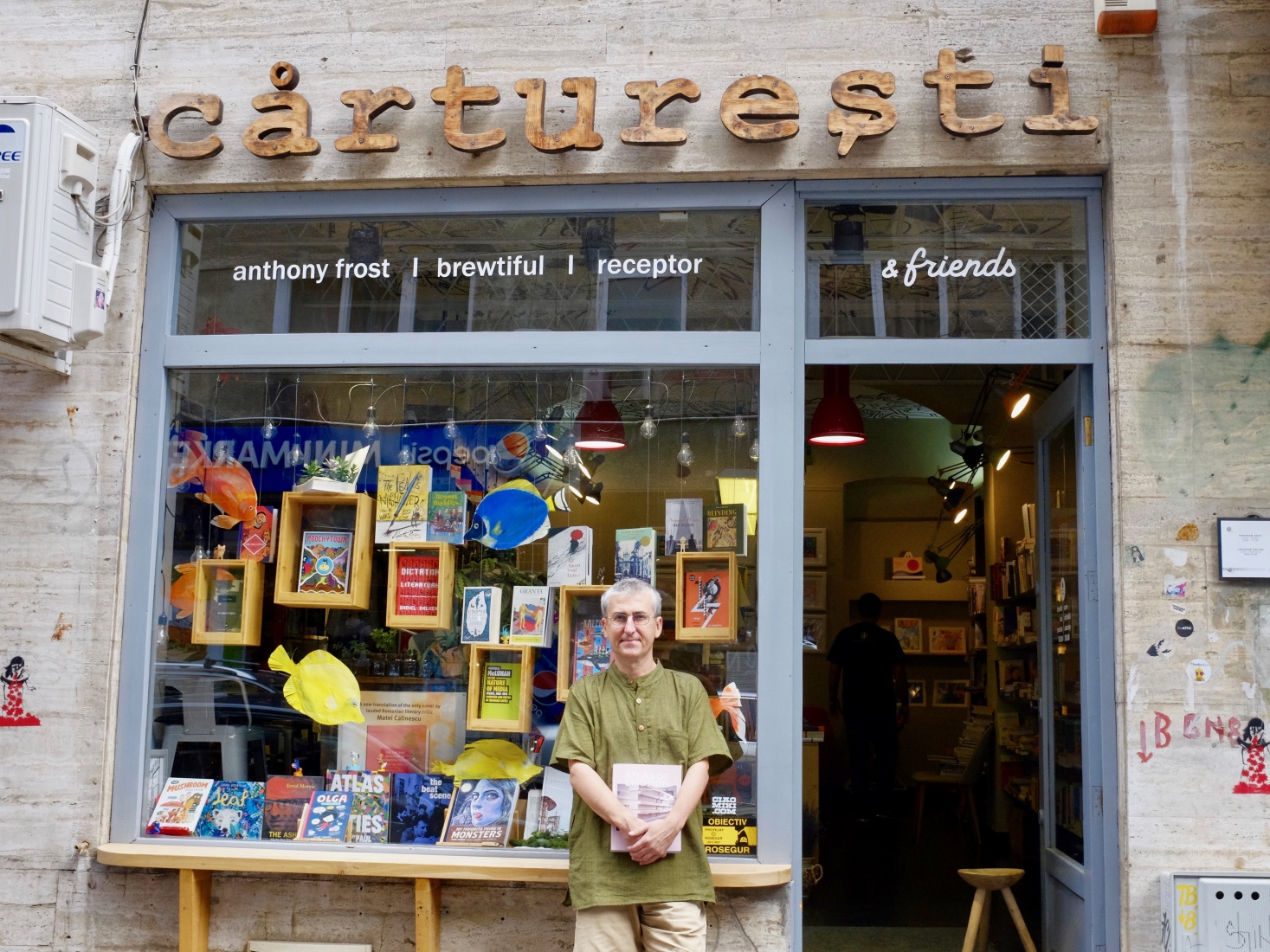 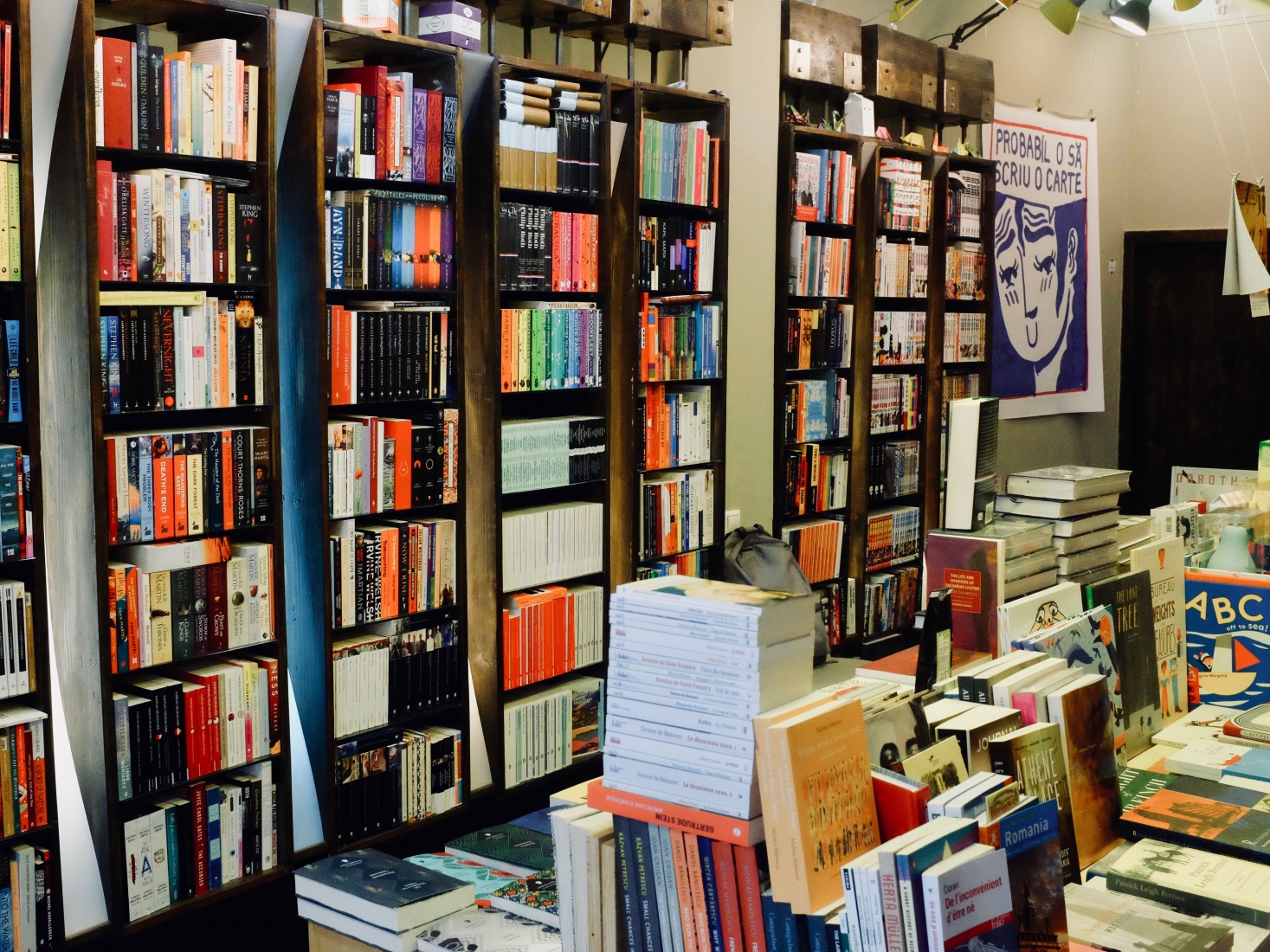 The interior bookshelves of the reborn Cărturești & Friends. Photo by Mark Baker.

After living in and traveling around Central & Eastern Europe for three decades, I’ve become very familiar with this side of the continent’s best bookstores – at least the best English-language ones. When I lived in Vienna in the late 1980s, Shakespeare & Co booksellers on Sterngasse was my oasis – a tether to the outside world at a time when the Austrian capital felt abandoned on the edge of the Iron Curtain (“next stop, Bratislava,” as we used to call it).

The fall of Communism in Eastern Europe in 1989 brought with it a new generation of English-language bookshops. In addition to our bookstore, “The Globe” in Prague, Budapest had its “Bestsellers” and Kraków its “Massolit Books & Café.” In the heyday of English bookstores – in the mid-'90s and early 2000s -- Prague had four or five decent ones: Big Ben, Anagram, Shakespeare & Sons, and Bookworm (only the Globe and Shakespeare & Sons are still standing). 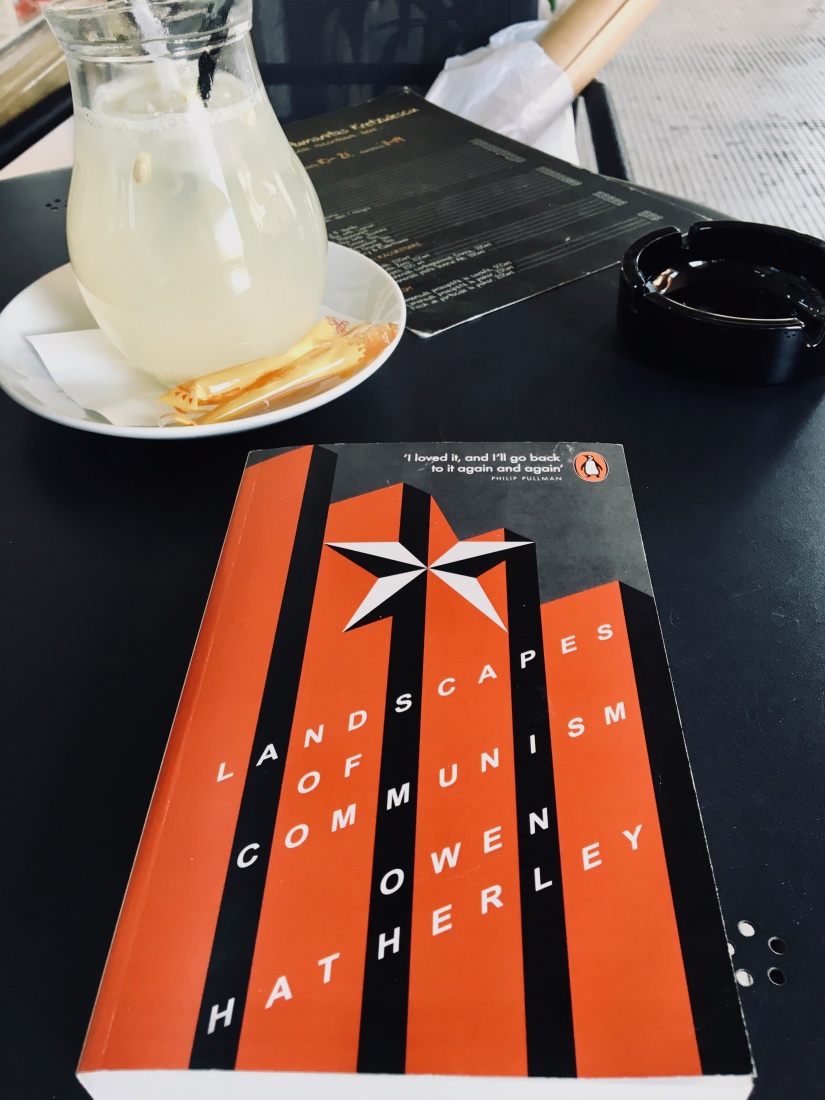 One of the pleasures of visiting Bucharest is relaxing over lemonade with an Anthony Frost find like the 'Landscapes of Communism.' Photo by Mark Baker. 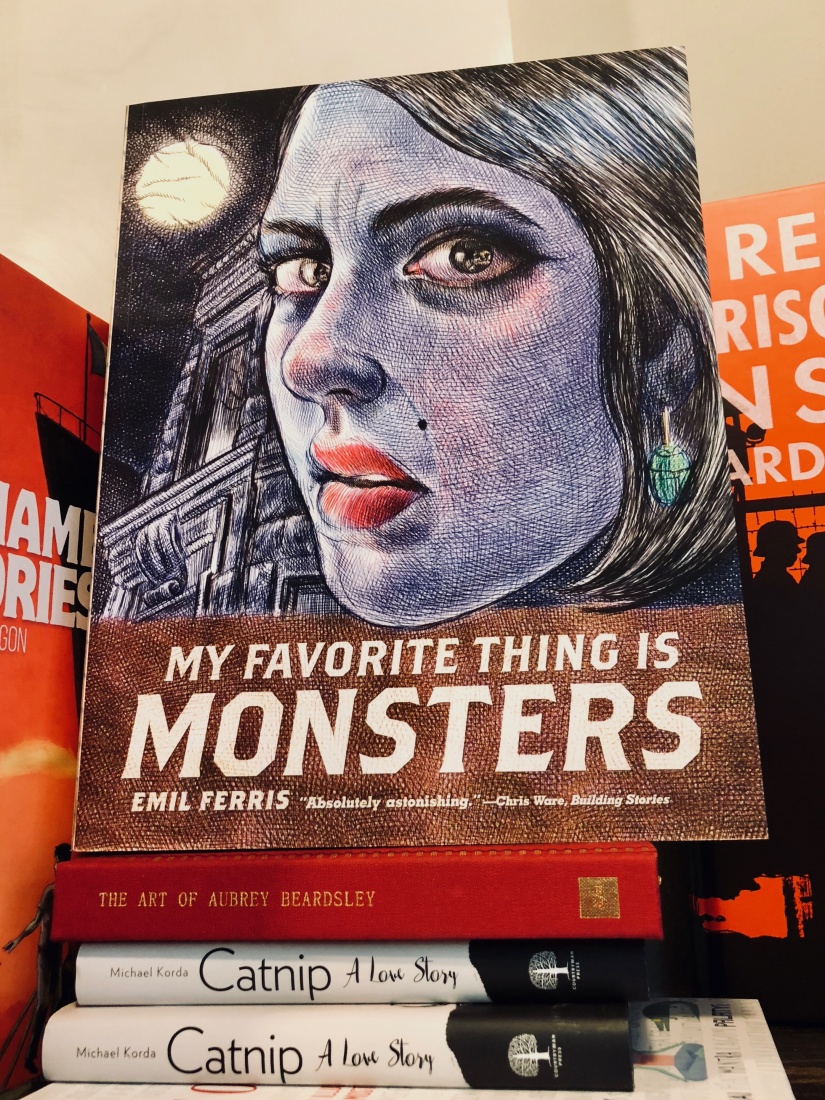 Not just high-brow fiction and nonfiction, but high-brow comics, such as the 2017 smash 'My Favorite Thing is Monsters.' Photo by Mark Baker. 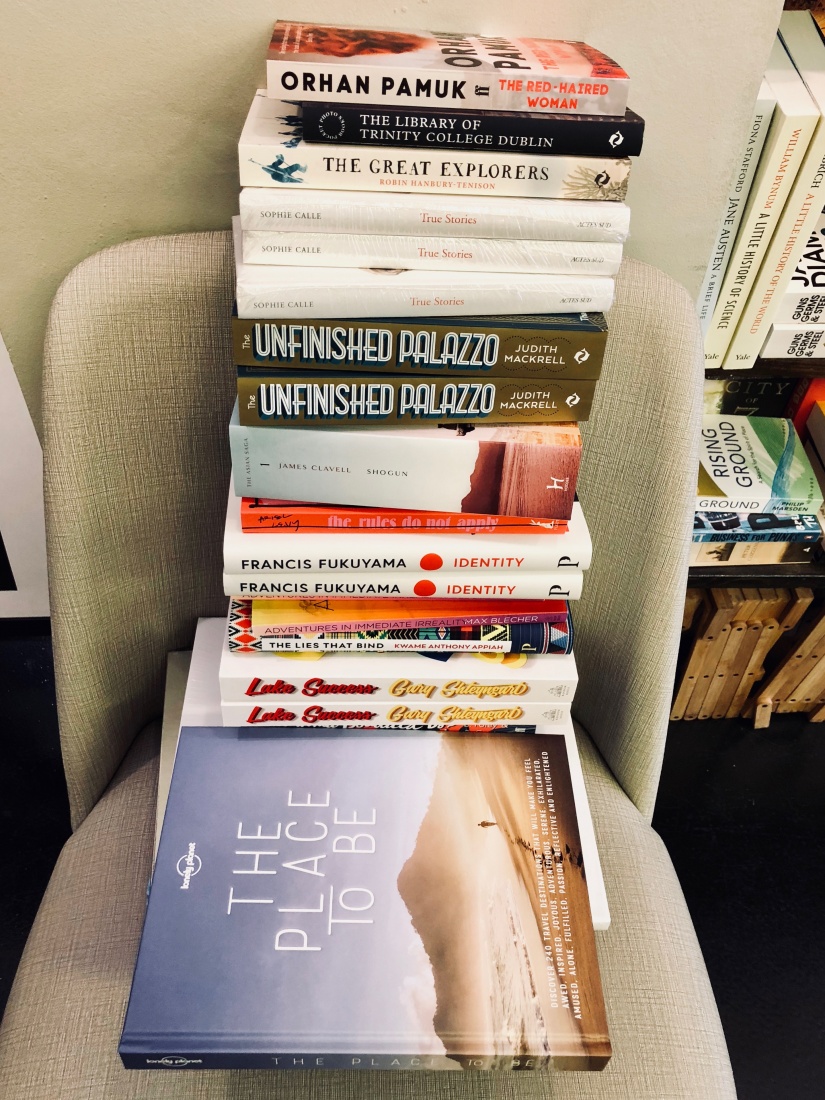 Books piled high on chairs, including -- I see -- a fetching coffee-table book published by none other than Lonely Planet. Photo by Mark Baker. 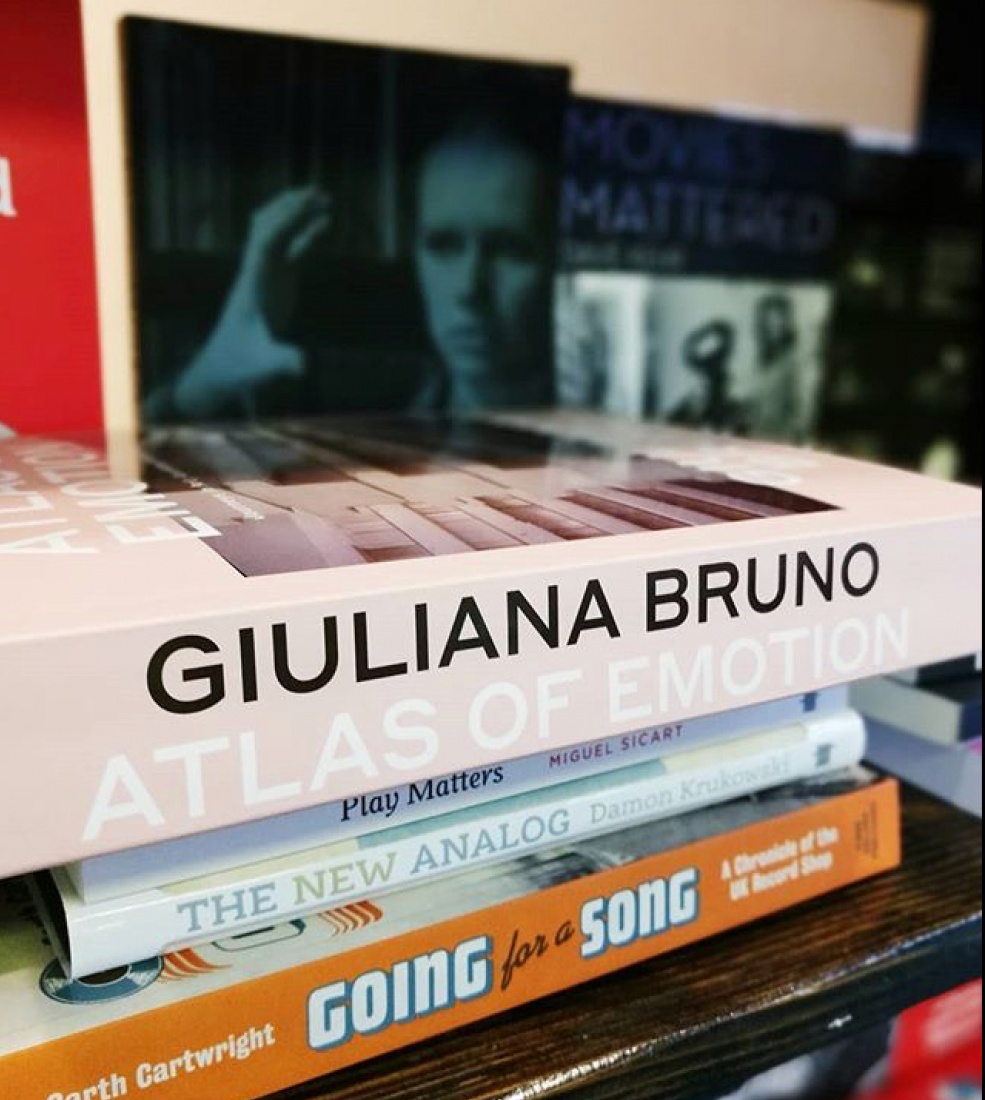 Where else in Bucharest are you going to find a copy of Giuliana Bruno's groundbreaking 'Atlas of Emotion'? Photo by Mark Baker.

Back then, English bookshops played several indispensable roles (and still do). They brought to their cities some of the best of world literature – and not just the Anglophonic stuff, but books from around the world that had been translated into English though not yet into the various national languages. For English-speaking visitors, they were the first ports of call for finding the best local writers in English translation.

Most importantly (at least in Central & Eastern Europe, after decades of Communist-era censorship), English bookshops played a symbolic role as well. Their very existence in places like Prague, Budapest and Kraków, was a thumb in the eye of the old regimes. Democracy seemed safe as long as formerly banned authors were still being openly sold and celebrated. 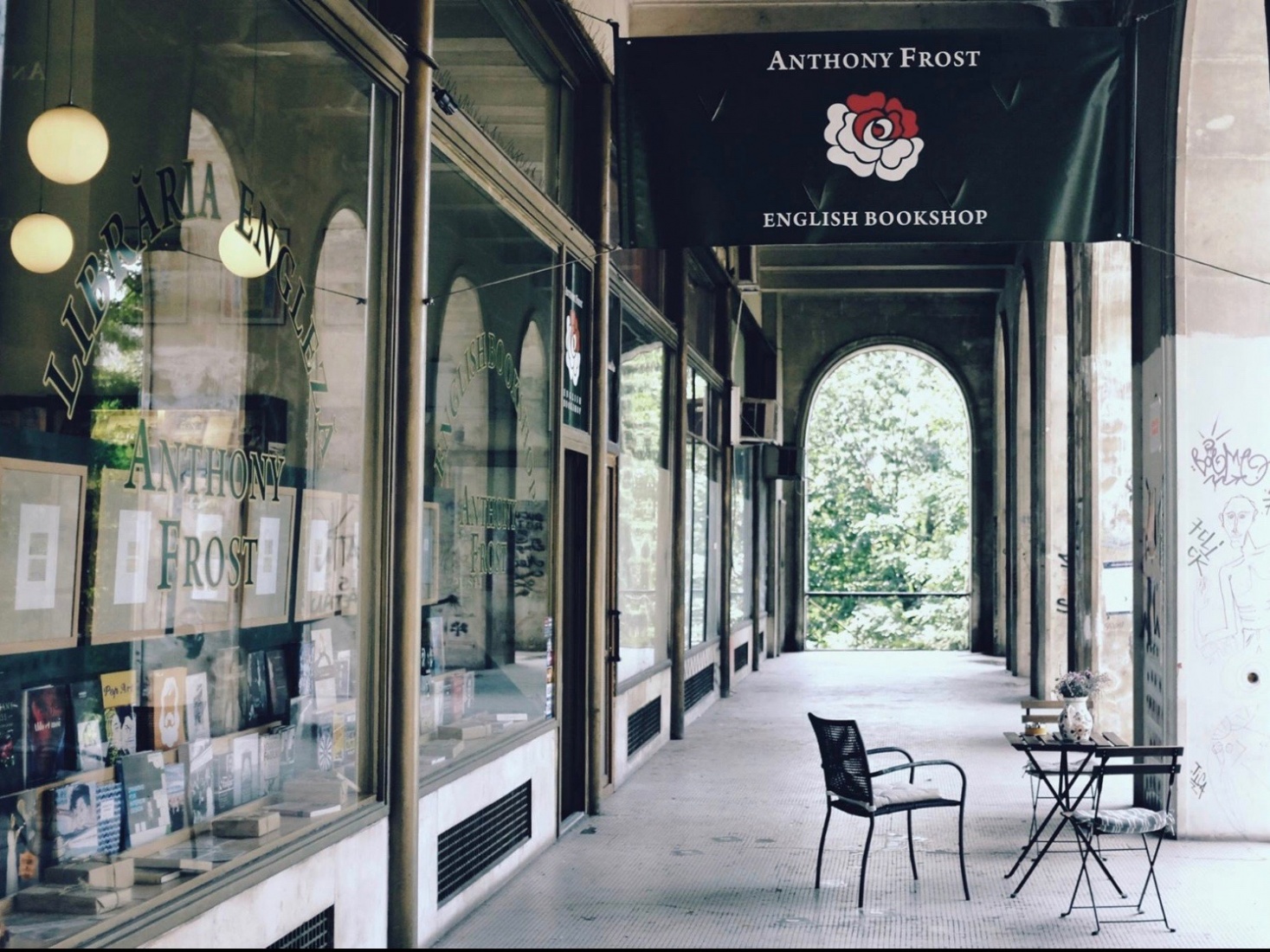 The former location of Anthony Frost was down a long, quiet covered passageway. Lovely to look at, but not great for a retail business. Photo by Mark Baker. 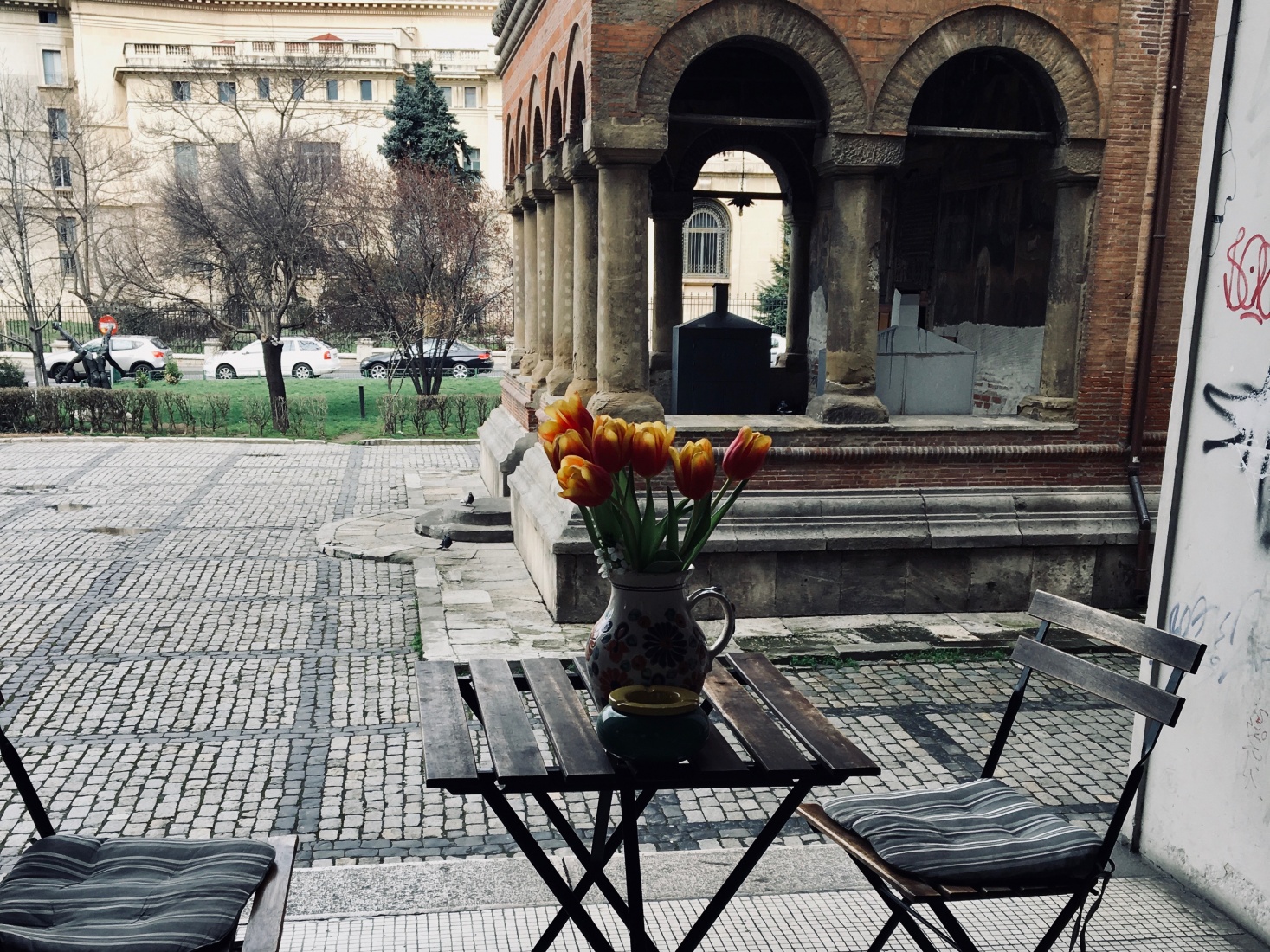 A view off the terrace of the original Anthony Frost location. Okay, this was a pretty nice place to sit and read. Photo by Mark Baker. 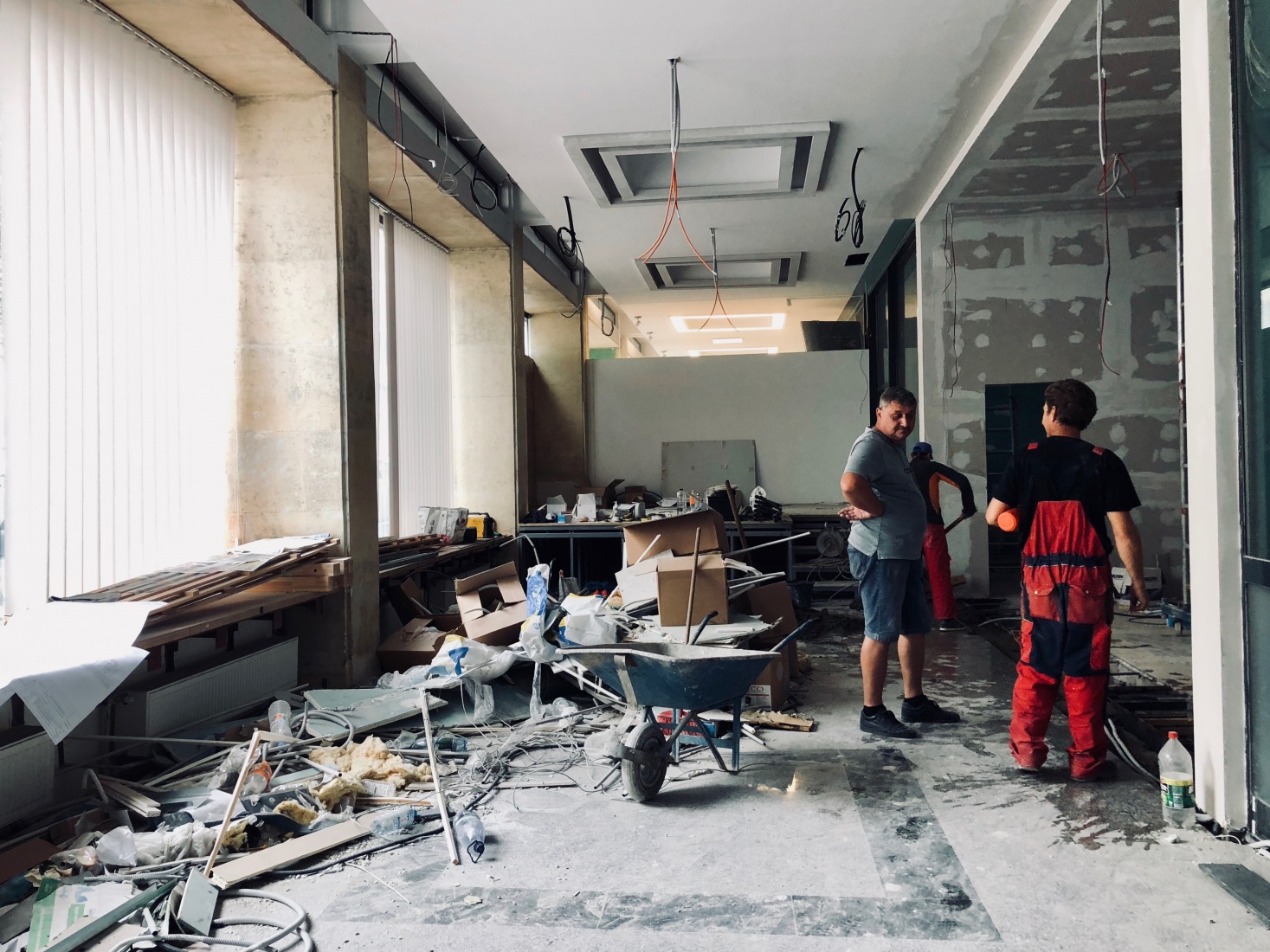 On my visit in September 2018, the location of what owner Vlad Niculescu hopes will be a brand new shop dedicated to urbanism and architecture. Photo by Mark Baker. 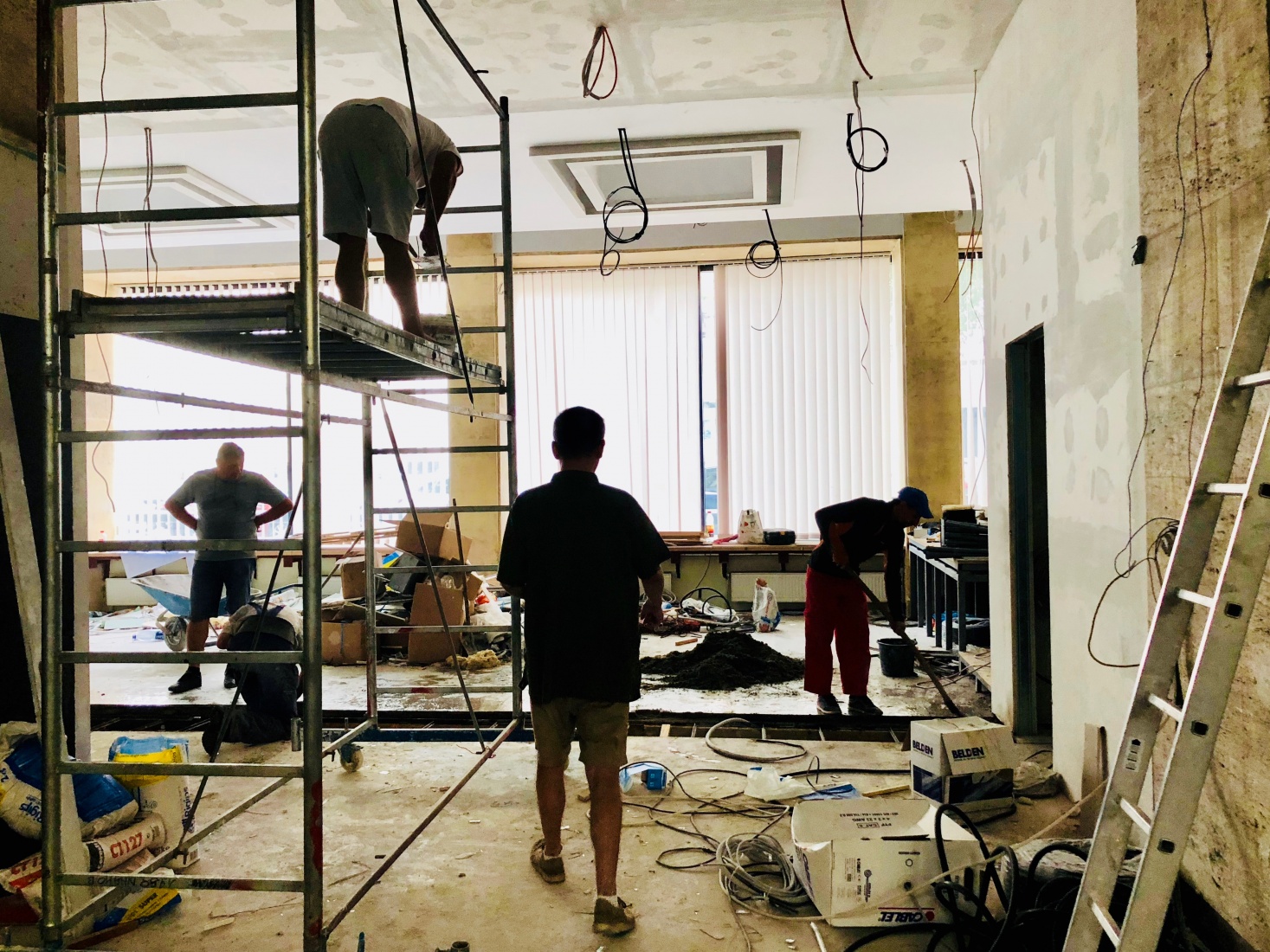 Work is well underway at the new bookstore for urbanism and architecture, just a stone's throw from Cărturești & Friends. Photo by Mark Baker.

Bucharest’s “Anthony Frost English Bookshop*” was late to the party – opening in 2007 – but thanks to the discriminating eye of owner Vlad Niculescu, it quickly established itself as arguably the region’s best English-language bookstore.

From the beginning, the odds were stacked against it. First, there was the overriding question of whether Bucharest residents would be willing to shell out for the relatively high cost of imported books (and in a foreign language to boot). Second, was the store’s initial location on a hidden terrace, well off of busy Calea Victoriei. Not many potential customers would wander down that alleyway in the hope of finding a great bookstore. Third, was simply Anthony Frost’s small size: just a couple of rooms with shelves that probably held fewer than 1,000 titles or so.

Still, on periodic visits over the years, while updating guidebooks for Lonely Planet or working on assignment for National Geographic, I’d find the store holding on -- if not exactly thriving. My meetings with Vlad were almost always the same: my sense of wonder that Bucharest could support such an amazing store mixed with his grim assessment of the bookselling trade plus a conviction that, well, what the hell, good literature deserved such a place.

Anthony Frost’s secret sauce was simply a collection of titles – the latest in high-brow fiction from London and New York, Romanian writers in English translation, hard-to-find books on Central European architecture, design and photography, and the best in current nonfiction – that fed the mind. It was the kind of bookstore that made you feel smarter just walking through the door.

Looking over my own bookshelf in Prague as I write this, I see a bunch of books and authors I might never have discovered without Anthony Frost. There’s Mihail Sebastian’s memoirs from Bucharest in the 1930s, just as corrosive anti-Semitism was creeping into the capital’s society life. There’s American journalist Rosa Goldschmidt Waldeck’s gripping “Athene Palace,” written from the lobby of the posh Bucharest hotel of the same name (still standing) during that fateful year of 1940 when Romania fell in firmly with Nazi Germany in World War II. I also see one of my favorite picture books of all-time: “The Seaside Architecture of Socialist Romania,” required reading for anyone trying to make sense of Romania’s chaotic Black Sea development. There are lots of others.

The bookshop’s story seemed to have come to a predictable end last year, when I received a message on Facebook from another Anthony Frost fan, whom I didn’t know, asking if I wanted to contribute to a collective online obit to the store. She had apparently seen my review of the shop in Lonely Planet and thought I’d want to take part.

I wasn't privy to all the details, but it seemed as if the Orthodox Church, which owned the building Vlad was renting from, had other plans for the site and wasn’t planning to renew the store’s lease. I wrote a small tribute to the bookstore (which I’ve included in a photo here) and figured, well, that was that.

I have to confess I was dreading my next trip to Bucharest a bit and wondering, selfishly, where in the future I’d find my own space in that sprawling city. Bucharest residents often proudly point to their city’s grand intellectual history – and all that “Paris of the East” stuff from the 1920s – but this particular aspect of the city isn’t always easy to locate (especially if you don’t speak Romanian). 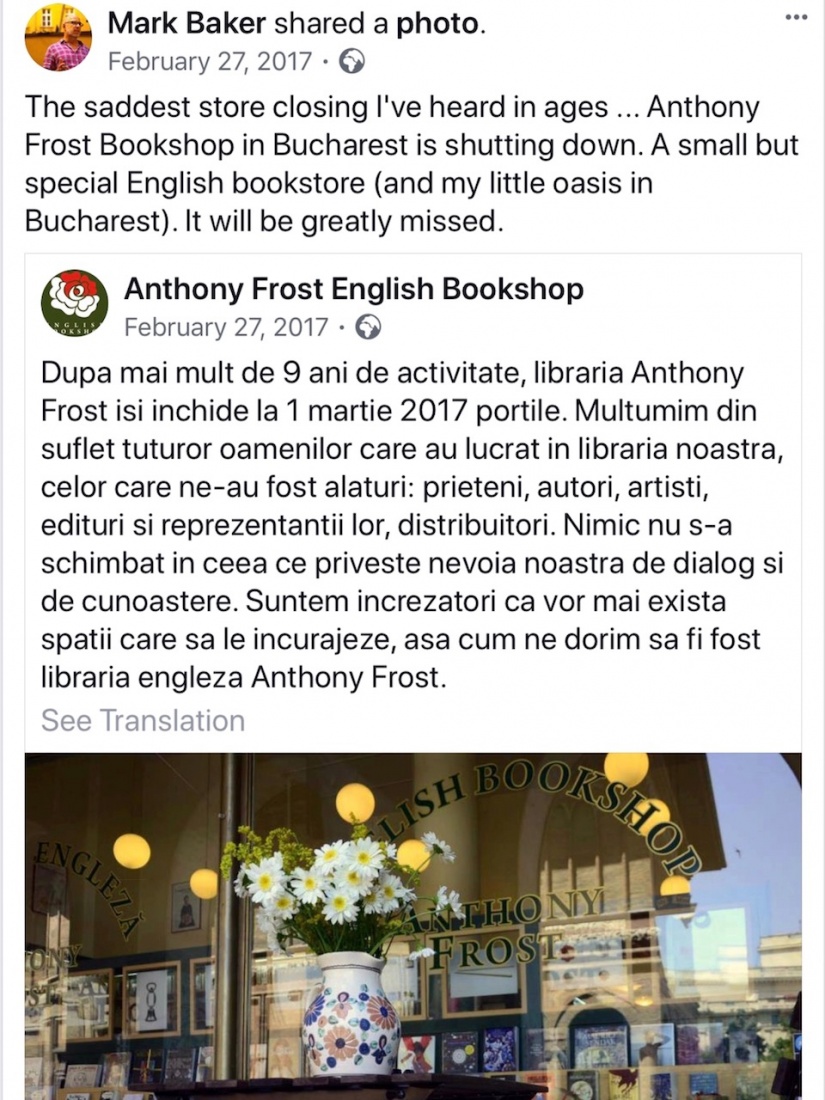 A screen grab of a short tribute I wrote to a collective online obit on the closing of the original 'Anthony Frost.'

From my office in Prague. Photo by Mark Baker.

As you know from the introduction, this tale has a happy ending. About 10 months after closing, the Romanian national bookstore chain, Cărturești, offered Vlad an alternative space to reopen as “Cărturești & Friends.” The new location, at Strada Edgar Quinet 9 (see map plot below), is not far from the city’s Historic Center – and much closer to the university and loads of potential book buyers.

On my most recent trip to Bucharest, in September, I popped in to say hello and check out the new digs. I found the same great books and a renewed sense of purpose. Vlad walked me over to another space down the street, where he’s planning to launch a separate bookstore venture to focus on urban studies, photography and architecture.

Once that opens, I know where I’ll be hanging out next time I’m in town.

Readers, when in Bucharest, be sure to drop by Cărturești & Friends and buy a book (or two).

*A side note on the name “Anthony Frost.” I’d always assumed the store was named after an obscure character in a Dickens’ novel or something that I'd never read. I finally worked up the nerve to ask Vlad where it came from. The answer: a late Englishman who came to Romania after the fall of Communism to help with Romanian orphans. Vlad describes him as one of the most beautiful human beings he’s ever met. MB