There are plenty of airline horror stories out there, so maybe it’s time to tell a happier tale of a trip where everything started out badly and through a quirk of fate, and the timely intervention a good-hearted gate agent, ended up going surprisingly well. My trip back to Prague from the U.S. last week was shaping up to be just another sad-sack story, as my flight was delayed at the very last minute and all of my carefully laid connections fell like dominoes. And then somehow the clouds parted and I was being offered cocktails and ushered into my own first-class compartment. And maybe it’s time, too, to single out Delta Airlines, a company with which I’ve had some trust issues in the past, for going -- on this flight at least -- above and beyond.

Top Photo: As the day unfolded and my flights were delayed and cancelled, little did I know I'd be wearing Delta One's coveted striped socks for the ride back to Prague. Photo by Mark Baker.
Posted in Diversions, On The Road and tagged airline, Delta Airlines, Delta One, flying, Travel, United States.
Add a comment 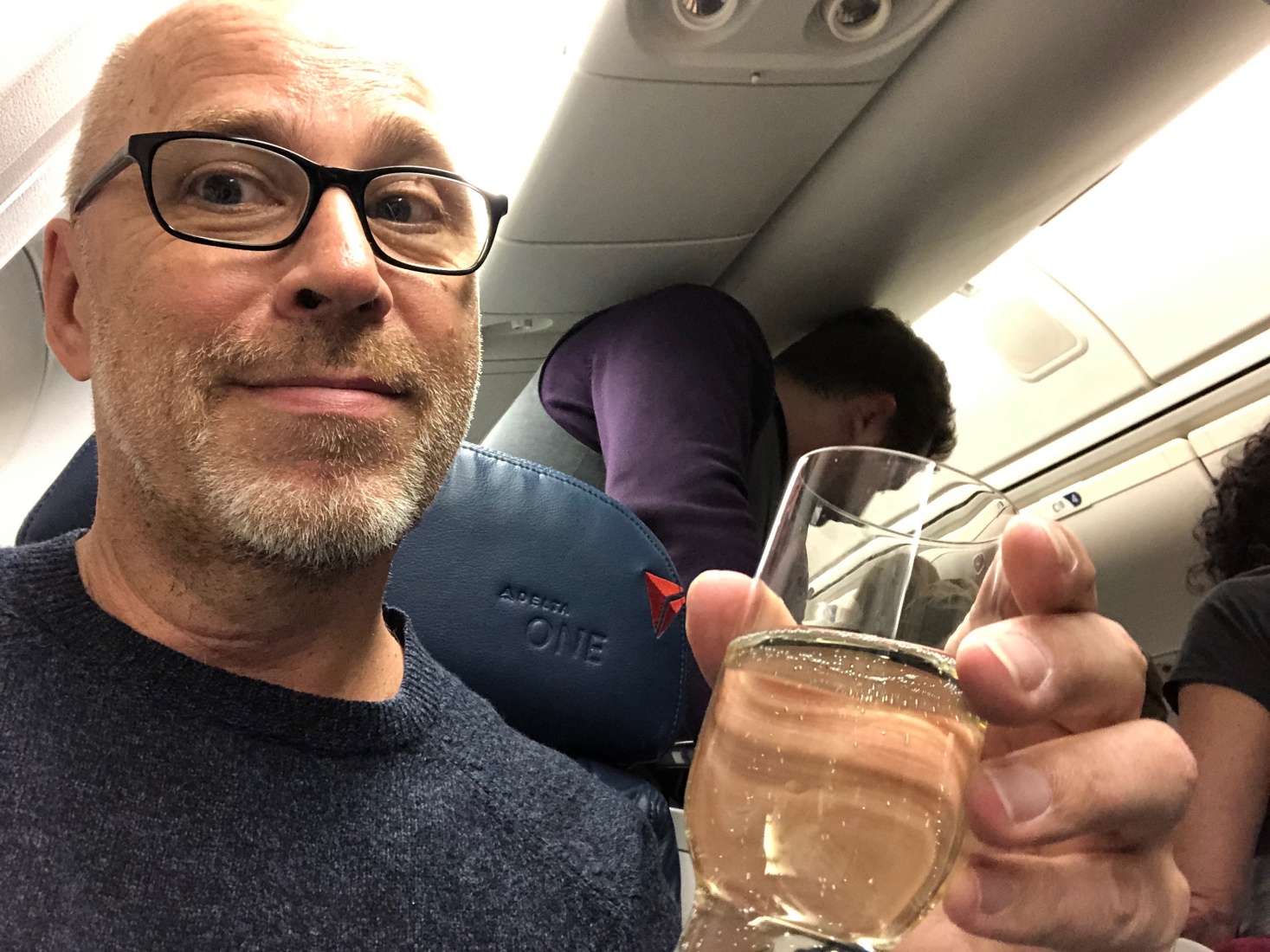 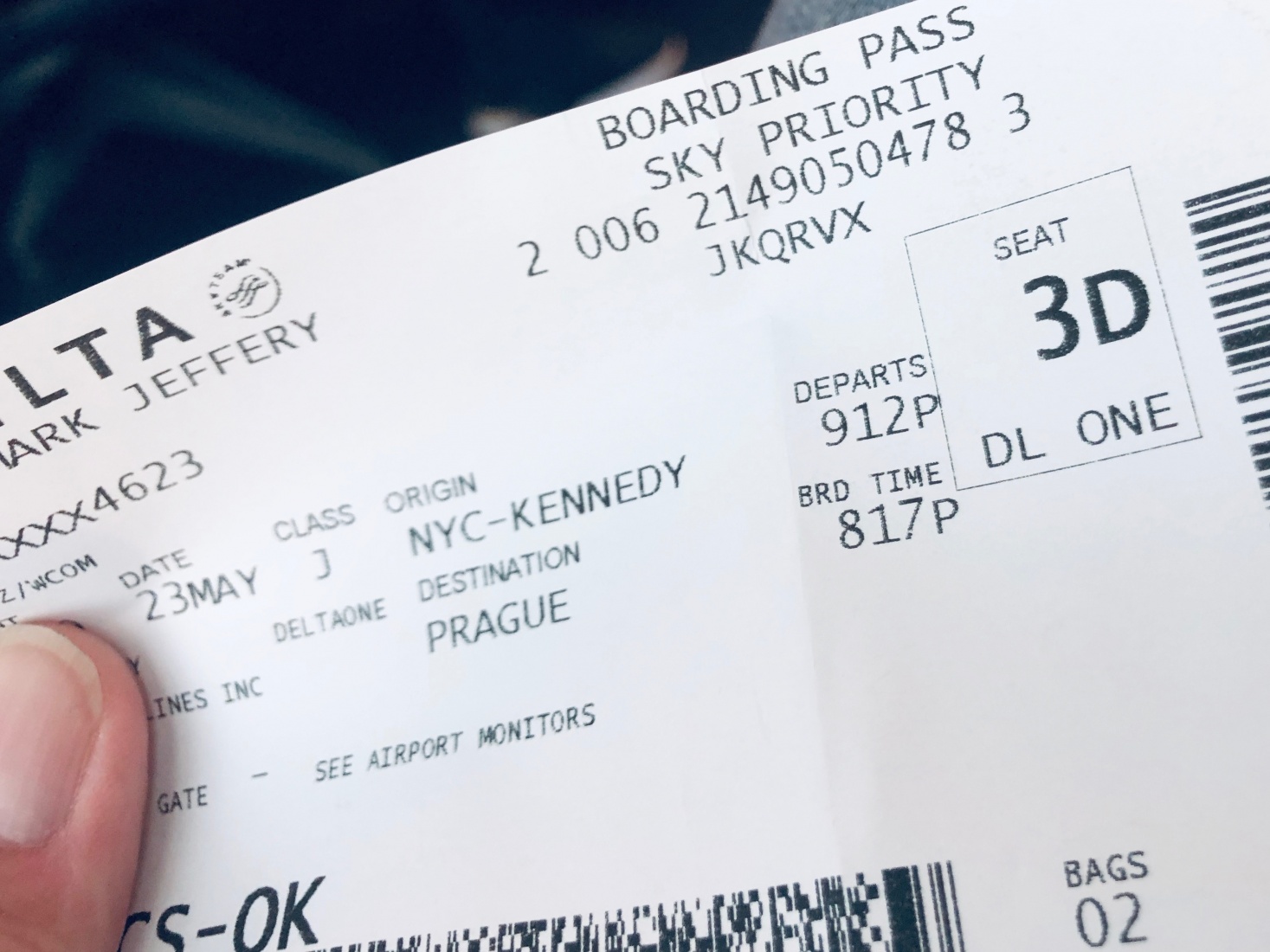 When I looked down at my boarding pass, I couldn't believe my eyes. The agent not only found me a window seat, he'd bumped me to the front of the plane. Photo by Mark Baker.

I've always had a kind of love/hate affair with Delta Airlines. As an American who lives in Prague and travels home at least twice a year, I’m dependent on Delta. They – together with their partners Air France and KLM – have what amounts to a monopoly on connections between the Czech Republic and the United States. Both United and American Airlines are trying to move in on Delta’s Prague turf (and hopefully that will lead someday to some price competition), but for the moment Delta’s connections to both Pittsburgh and Sarasota (the places I fly to most) are still the best on the market and likely to remain so for the foreseeable future.

In Delta’s defense, most of the time these flights go off without a hitch. The typical flight plan to the U.S. runs from Prague through Amsterdam and either to Atlanta or Detroit (for the last connecting flight). There are usually a few nervous moments en-route (an unexpected mechanical failure or bad weather or brutally long lines at passport control), but 90 percent of the time, or so, I manage to make the connections, and the bags arrive too (not always a given, but that’s been getting better lately as well). 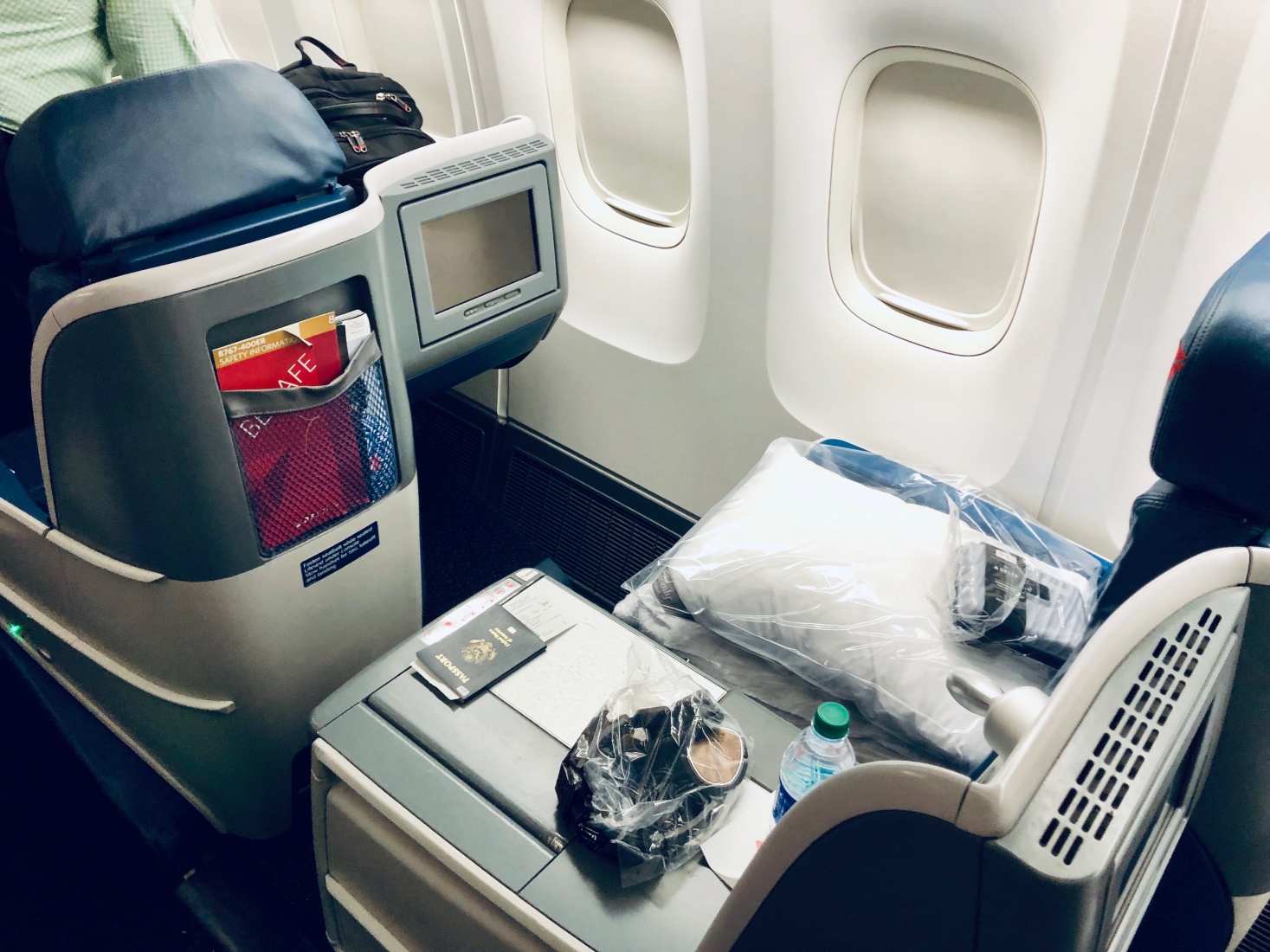 Instead of a middle-aisle seat on the red-eye to Paris, I'd have my own little nook, with a handy table to hold my cocktail, for a direct flight to Prague. Photo by Mark Baker. 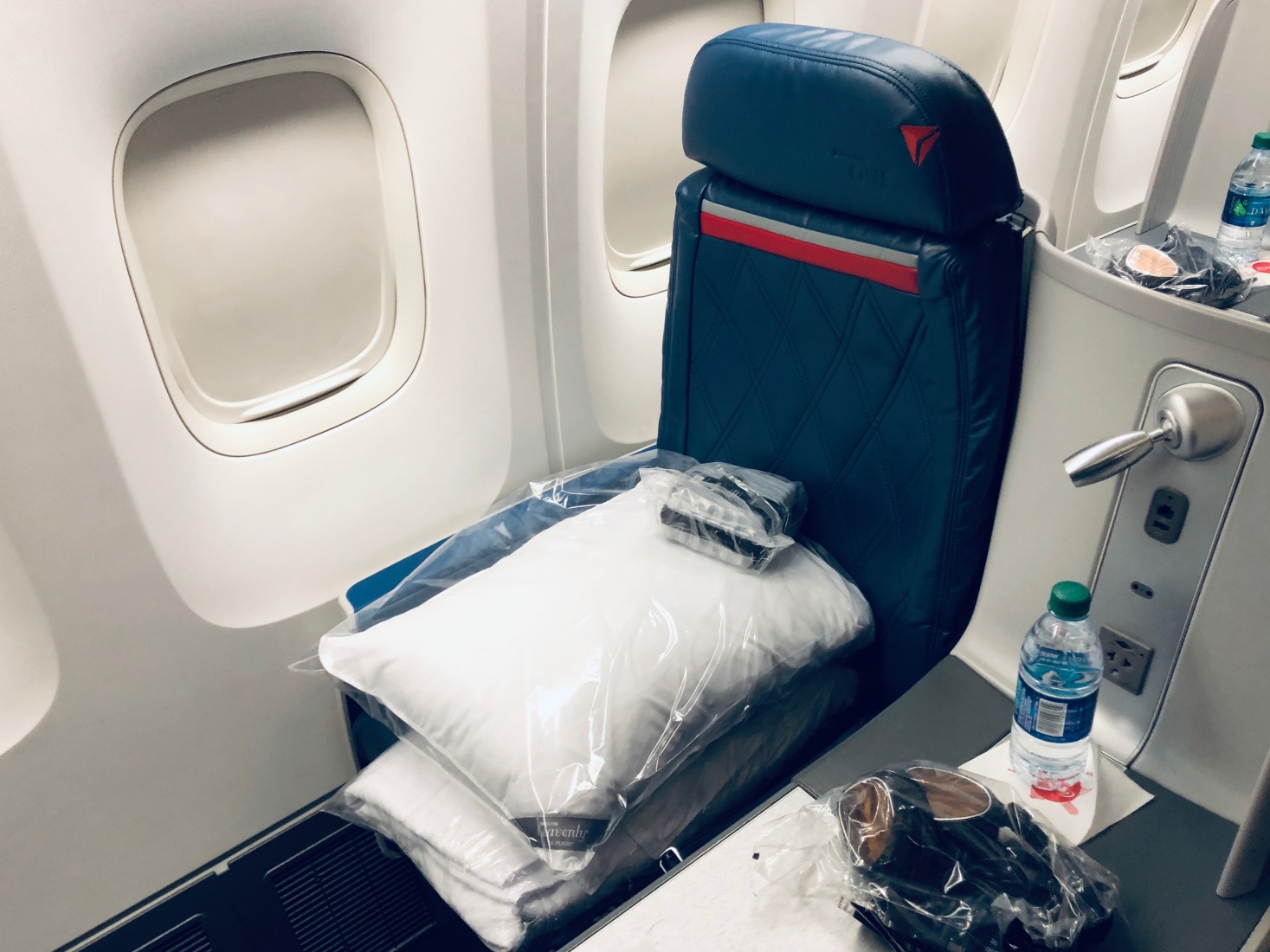 I was a happy camper when I walked over to seat 3D in Delta One with its reclining bed and big fluffy pillow. Photo by Mark Baker.

Of course, the hiccups can be legendary. On one Delta flight a couple of years ago (between New York and Paris) returning from the U.S., we’d made it all the way past Iceland and nearly to Ireland when the captain suddenly announced the plane would be turning back toward Canada to make an emergency landing at Gander AFB. I never learned why the plane went back (I am sure it was for a good reason), but on that particular night my parents had decided to stay up to monitor the flight online. They had a couple nervous moments as they watched the plane nearly reach its destination only to veer off at the last moment and head back for Canada. A hijacking? A terrorist act? Thankfully no. Just a typical night on an overseas flight.

Nothing will likely ever top my trip home for Christmas in 2017. My Delta flight from Amsterdam had just arrived on the tarmac in Atlanta when the entire airport lost electrical power. We sat on the runway for six hours (following a nine-hour flight) without any explanation of what was happening. Of course, it’s not entirely fair to blame Delta for a power failure they had nothing to do with. Still, it was clear the staff hadn’t been adequately trained to handle a disaster as foreseeable as a power failure. The ground staff had no idea what to do and disappeared into the woodwork just when passengers needed them most.

I wrote about that trip for my blog here, and I learned a valuable lesson from the whole thing: There’s no point in becoming upset by or even complaining about things that are outside of your control. On that trip, I simply settled in for the ride and everything turned out fine. Delta even comped my Atlanta hotel that night. 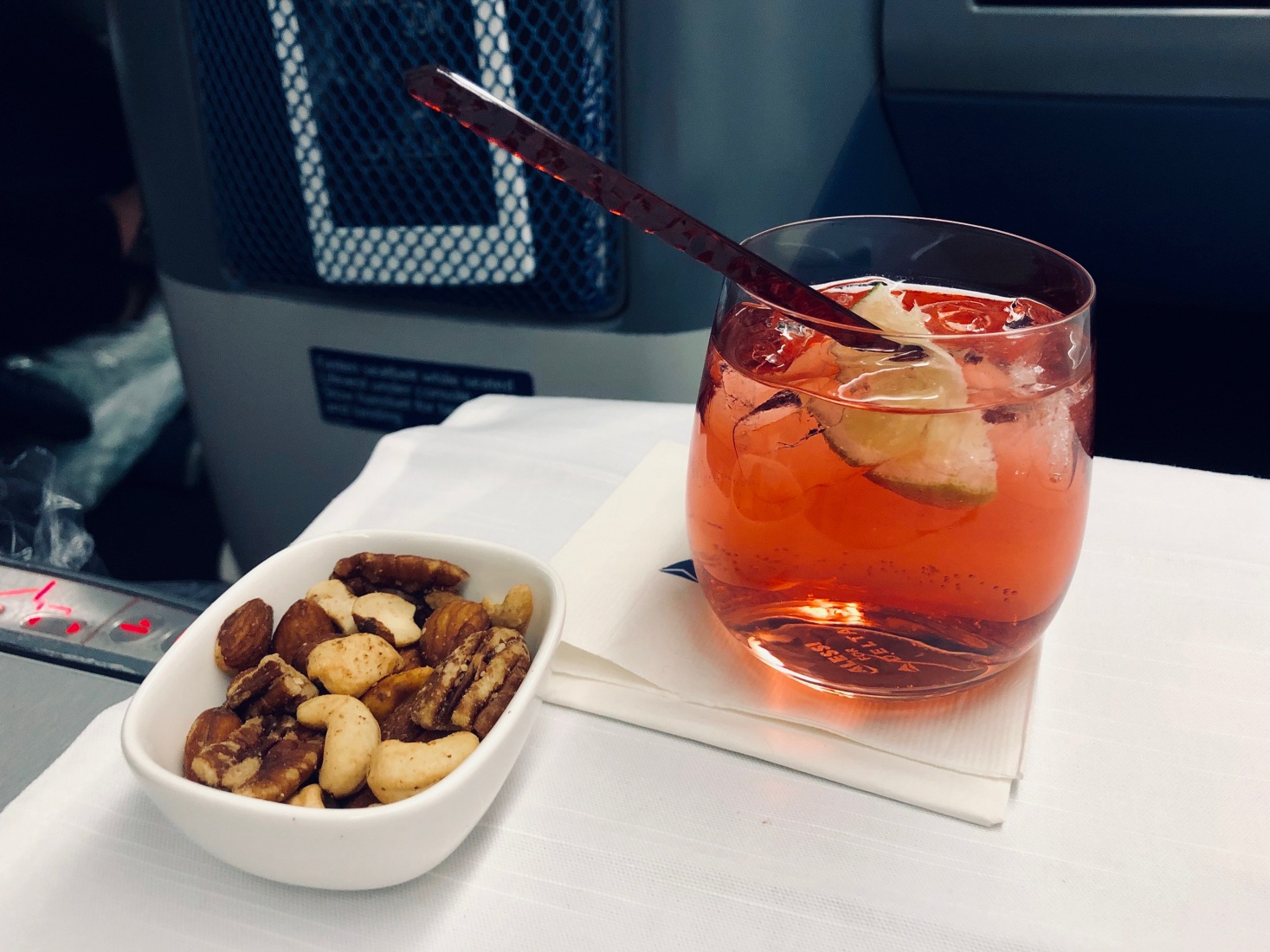 After all that uncertainty, I figured I deserved a little welcome cocktail. Photo by Mark Baker. 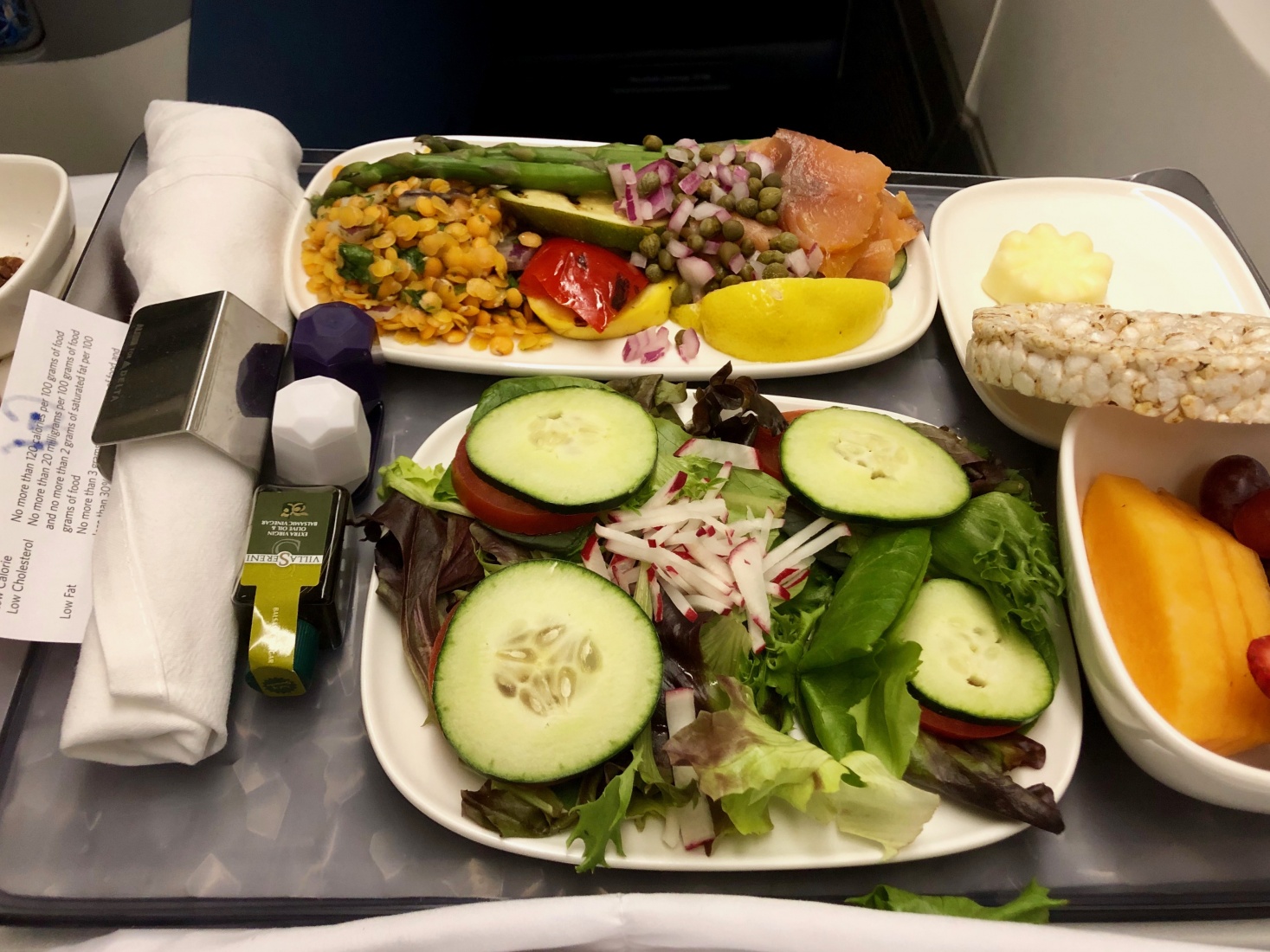 Believe it or not this was simply the salad course of my meal. Photo by Mark Baker.

All of this was far from my mind last week as my parents drove me down from Ohio to the Pittsburgh Airport to catch a Delta return flight to Prague (via New York’s JFK airport). I was wrapping up a seven-week stay in the U.S. to work on an travel-writing project for Lonely Planet. I’d managed to squeeze in a trip home and was in a good mood on the ride to the airport. To make things better, I’d booked a direct flight for the leg from JFK to Prague (there would be no bleary-eyed, early-morning connection in Paris or Amsterdam this time around). I’d even plunked down the extra cash for a "Delta Comfort+" ticket, which meant I’d get to board the plane early in New York.

Once in Pittsburgh, I said goodbye to my parents, checked in at the Delta counter, paid my excess baggage fee ($100 yikes!) and started walking toward the TSA security gate. The flight was still a couple of hours away and I had plenty of time. I could sense it was going to be a smooth trip.

And then my phone buzzed. It was my Delta app sending me a message. The flight from Pittsburgh to New York had been delayed by three hours and I wouldn’t be able to make the Prague connection. “Would you like to re-book?” the app cheerily asked. Arrgh.

Since I hadn’t gone through security yet, I hoofed it back to the Delta check-in counter to sort out my options. The woman behind the desk was sympathetic but couldn't do much to help. For such a big city, Pittsburgh has a surprisingly small airport. There aren’t a lot of flights (or re-booking options).

I kept reminding myself to stay positive and maintain my cool as I listened to her discuss my fate over the phone with another Delta agent. It wasn’t easy.

Desk agent (on the phone): “We could re-route him to (New York’s) LaGuardia and then he’d have to take the shuttle to JFK. He might just make that one.”

The voice inside my head: LaGuardia?? A fate worse than death.

“What about Boston? Could we fly him up there tonight and maybe get him over to Amsterdam? Oh, that one’s full too?”

Oh dear, this is getting complicated.

“What about Atlanta? Any seats left going across to Paris tonight? Looks like a tight connection, but would that one work?”

Tight connection in Paris. Is she out of her mind?

After 20 minutes, the agent put the phone down and gave me the bad news. Delta had just one option to get me to Europe that night: I’d fly over to JFK on the original delayed flight and then catch a red-eye to Paris Charles de Gaulle (CDG). Once in Paris, I’d have 50 minutes to make the flight to Prague. The bags may or may not make it. And, oh yeah, I’d have to forget that "Comfort+" thing too.

I nodded, thanked her for trying, and headed back to security. It was going to be a crazy night. 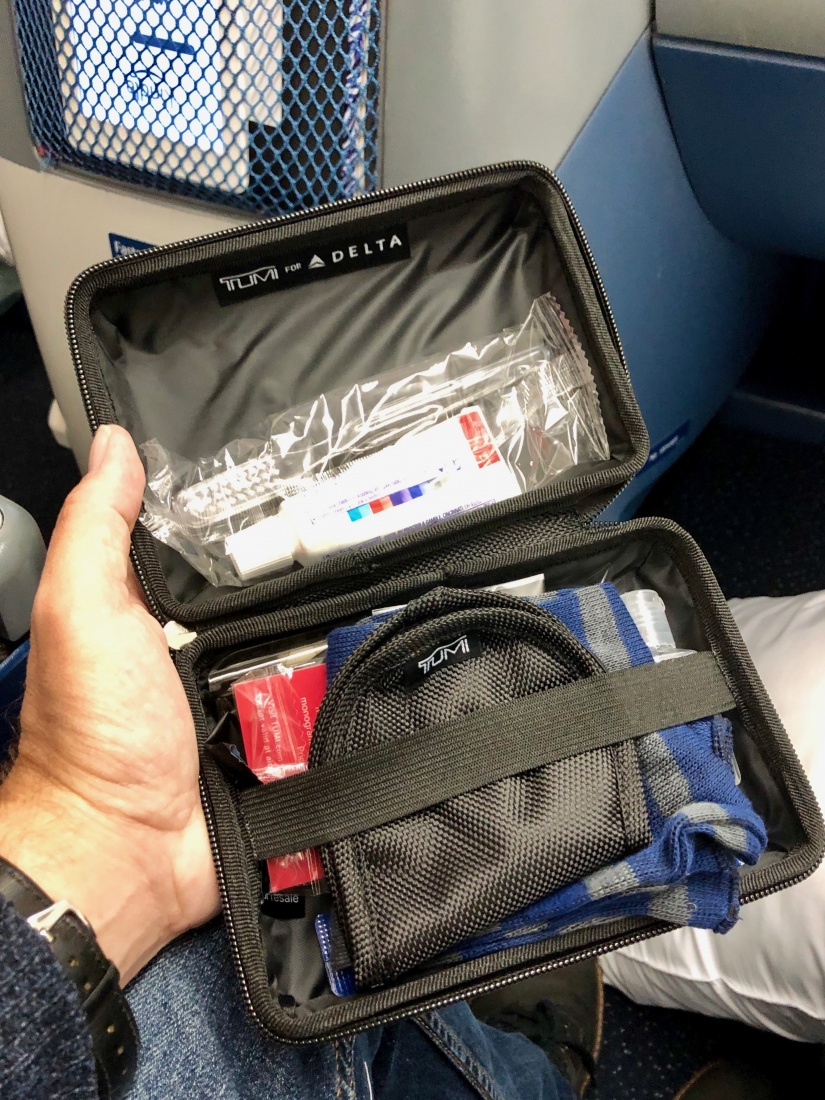 I liked the little toiletries kit they handed out on Delta One. Kudos for the comfy eye mask and the striped socks! Photo by Mark Baker. 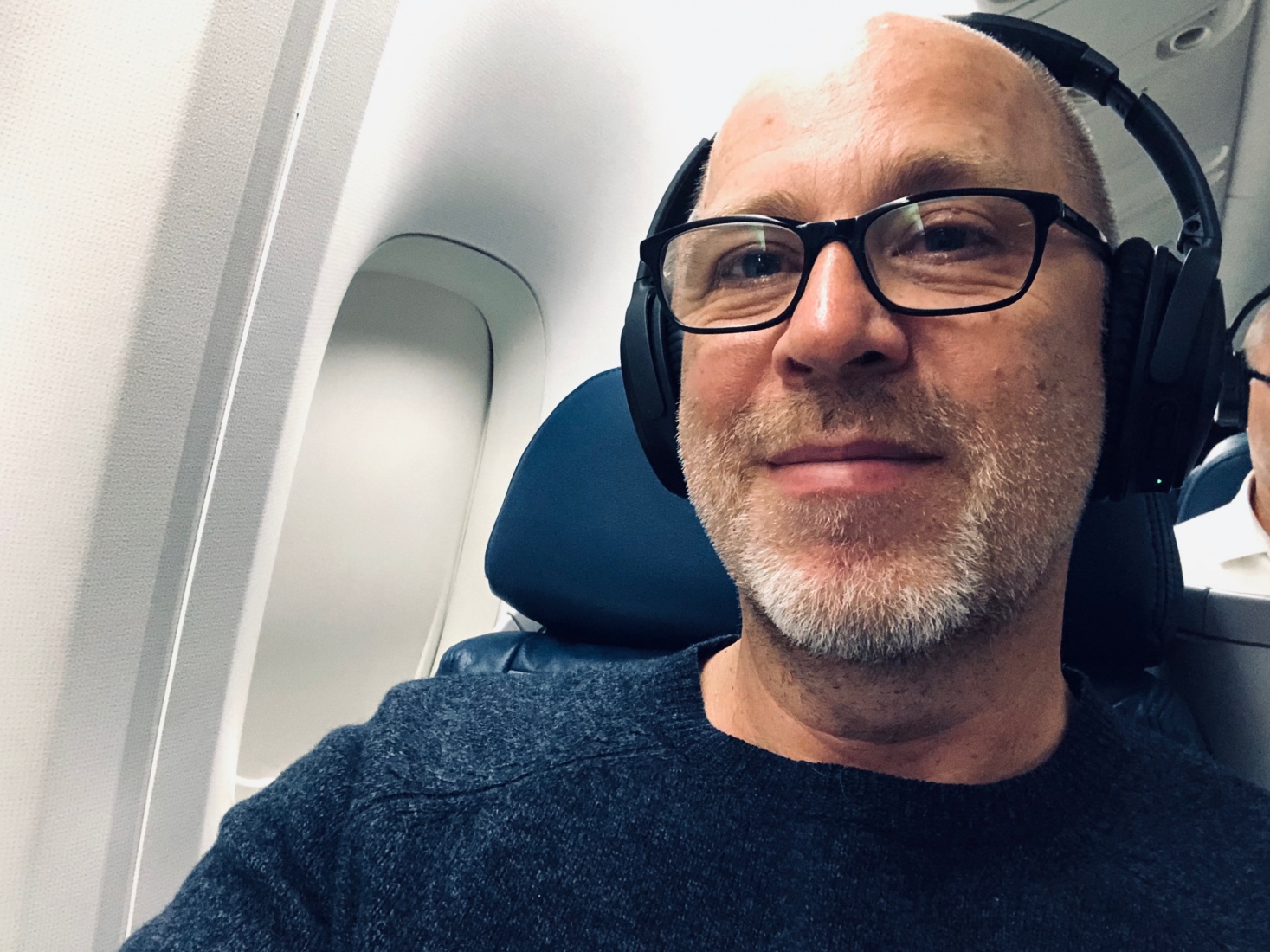 Settling in for a hop across the pond. I could get used to this. Photo by Mark Baker.

And that’s when everything started to turn around.

I entered the gate area for the delayed JFK flight and took a seat. My mind was still buzzing with ideas for how to get out of this, but I couldn’t come up with anything I thought might work.

Just as I was reconciling myself to the Paris flight, Delta miraculously reset the departure time on the board for the outbound Pittsburgh-JFK flight. It would still be delayed, but this time by only an hour (not three). That meant I could still make my original Prague connection if everything went smoothly from here.

I immediately got back in line to speak with another Delta rep, a gate agent named "Robbie." I was hoping he could simply cancel my new Paris ticket and restore my old Prague reservation, but I didn’t dare get my hopes up. I figured there was a good chance someone else had already nabbed my seat on the Prague flight and there may not be any room on the plane anyway.

Robbie turned out to be incredibly helpful. He took my request in stride and seemed determined to find something. As I’d feared, my old seat was gone, but after a few minutes of eyeing his screen, Robbie told me he’d found something else. He could get me onto the Prague flight, and he’d even been able to grab a window seat.

I was overjoyed. I told him I didn’t care about the seat. Anything at that point would beat the prospect of sprinting through Paris CDG at 7am just to miss a close connection.

He handed me my new boarding pass. I gave it a quick glance and then rubbed my eyes. It was indeed a window seat. What he didn't mention, though, was that he’d also bumped me up to first class.

Needless to say, it turned out to be an awesome flight. I'll let the photos tell the rest of the story. As a writer who normally travels on a very thin dime, I rarely allow myself any kind of real extravagance, and pretty much anything above economy remains out of my budget.

Maybe it’s time, though, for me to reassess my attitude toward Delta. After all, they’d clearly gone out of their way on this flight to do a flyer a good turn.