I was getting tired of my Netflix account here in Prague. I’m not much of a TV watcher (even during the Covid-19 lockdown), and I wasn’t using the service enough to justify the monthly fee. Then something amazing happened. The good people over at Czech Netflix started adding tons of Czech films (both old and new, and many with optional English subtitles) to the service. That was more than enough to get me to renew. It also gave me the opportunity to re-watch some old favorites and fill in the (many) embarrassing gaps.

And that’s provided the inspiration for this list of my "15 favorite" Czech films. The list is still weak on films of the past few years (I burned out on historical films, which have been all the rage here for a while) and it’s biased in favor of the bittersweet, black and white comedies of the 1960s’ Czech "New Wave.” With the Netflix trove, though, I’m sure I’ll find plenty of overlooked masterpieces and come back to refresh this list soon. Not everyone will have these films on their Netflix accounts, and not all the films here are available for streaming, but a little googling should turn up a subtitled copy somewhere. I’ve named the films in alphabetical order, according to their English titles (click on the title to bring up the IMDb page).

Top Photo: This still is from 'Closely Watched Trains,' one of the very first Czech films I ever saw. I was a grad student in New York and the film was part of a 'Contemporary Eastern European Culture' class. It's the story of the shenanigans at a small Czech railroad station during the German occupation of World War II. This is young Miloš (Václav Neckář), the naive station guard. Neckář, at the time the film was made, was also one of the country's biggest pop stars, as part of the 'Golden Kids' trio.
Posted in Diversions, Life In Prague and tagged Czech, film, Forman, Menzel, New Wave, Sverak.
Add a comment 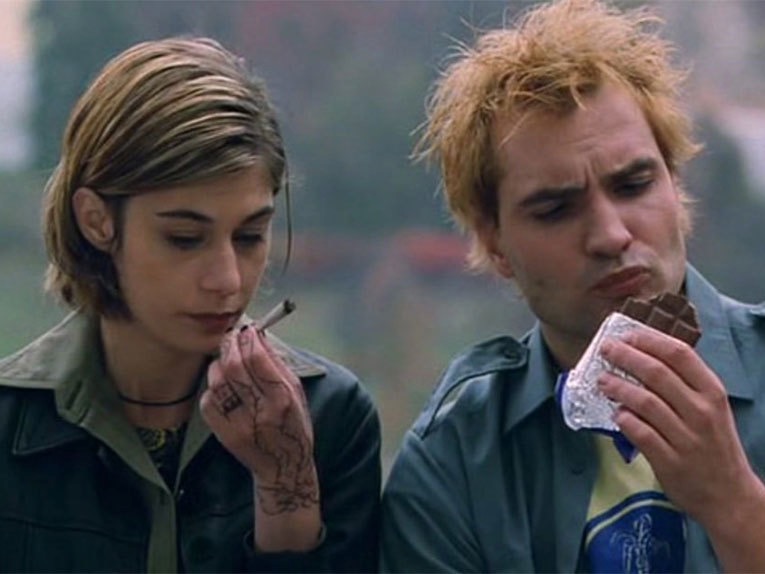 A screen-capture from 'Loners' (Samotáři); it was a breakout film for actor Jiří Macháček (right), who plays a very likeable stoner. Everyone's heart, though, fell for Labina Mitevska (left), a Macedonian actress, who at one point comically calls the Czech language 'cold' -- 'just like the people.' 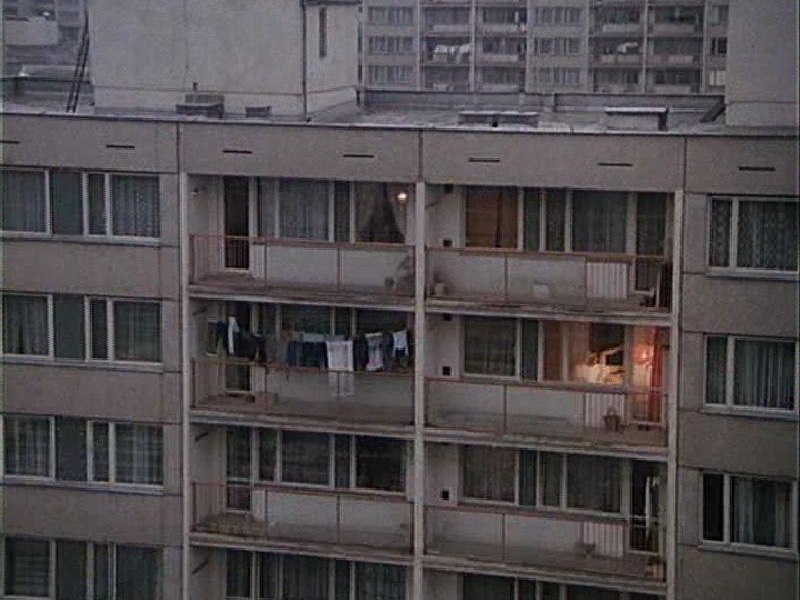 A scene from Věra Chytilová's groundbreaking 'Panel Story,' a critical look at the government's public-housing projects, and an intimate portrayal of the less-than-perfect lives of the new tenants.

Until the 1989 Velvet Revolution, this was the biggest Hollywood production to be filmed locally. Director Miloš Forman chose Prague for his Oscar-winning tale of composer Wolfgang Amadeus Mozart because it looked more like 18th-century "Vienna" than Vienna did. It didn’t hurt that Forman was able to film inside Prague's Estates Theater, where Don Giovanni premiered in 1787.

Vít Olmer’s dark, communist-era classic, while not a "great" film, nevertheless dared to take a hard look at corruption in communist Prague long before the Velvet Revolution was a twinkle in anyone's eye. The film was released and then banned and then released again, but was widely circulated underground on video. The film features arguably the best- (or worst-) ever use of a "Frankie Goes to Hollywood" soundtrack. As a personal aside, I once showed this film as part of a course on Central European culture I was teaching at Prague’s Anglo-American University. The only problem was that I'd forgotten how borderline-pornographic some of the scenes were. The students (and the teacher) were surprised (to say the least).

Czech director Jiří Menzel’s adaptation of Bohumil Hrabal’s comic World War II classic won an Oscar for Best Foreign Film in 1967 and put the Czech "New Wave" on international radar screens. Watch for the scene where young Miloš gently broaches the subject of premature ejaculation with an older woman while she lovingly strokes the neck of a goose. And no, I didn’t show this film as part of any university class.

This sad, funny story unfolds over the year leading up to the 1968 Warsaw Pact invasion and focuses on the lives of families who live in the same apartment block but who have radically differing political views. Czech directors have yet to make the definitive film about life under communism, but this attempt comes close. It’s since become an annual Christmas classic in many households. 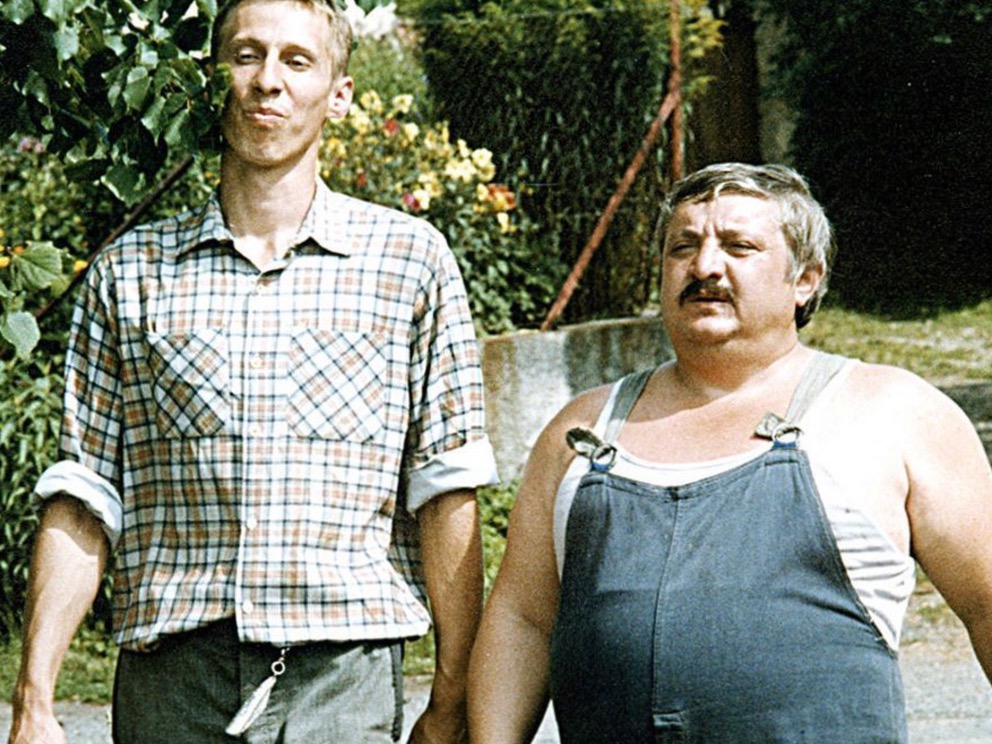 'My Sweet Little Village' is in many respects a buddy film. Otík (left, played by Hungarian actor János Bán) is a mentally challenged helper, always under the watchful, reluctant eye of his minder, Mr Pávek (right, played by the late Slovak actor, Marián Labuda). 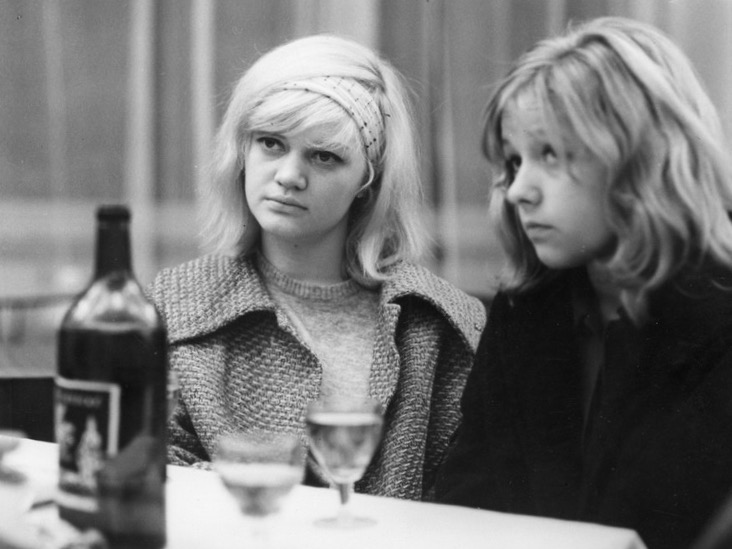 This still from the film 'Loves of a Blonde' is from the iconic and disastrous 'party' scene, when the factory manager where the girls work decides to invite some Russian soldiers over. That's the star of the film on the left, Hana Brejchová.

One of the better Czech documentaries from the post-Velvet Revolution years. Two local wags decide to fake the opening a new hypermarket, even handing out flyers promising the lowest prices ever, and then film the result. The ending is both predictable and sad; an allegory of the newly capitalist Czech Republic. The Czechs have been sold a bill of goods only to find out it’s all an illusion anyway.

Jan Hřebejk and Petr Jarchovský’s comic but unsparing view of the German World War II occupation and the Czechs who collaborated. The story concerns a couple who decide to hide a Jewish refugee in their house and the convoluted steps they need to take in order to conceal their actions – including publicly embracing the Nazis.

Czech films excel when it comes to smaller themes and slice-of-life stories that walk a fine line between comedy and something more serious. The talented father and son duo of Zdeněk and Jan Svěrák recreate the easy, eternal charm of earlier Czech films like “Loves of a Blonde” or “Closely Watched Trains” to tell the story of a group of unruly boys and their new taskmaster schoolteacher. It was shortlisted for an Oscar for Best Foreign Film in 1992 but didn’t win.

When director Jan Svěrák’s Oscar-winning tale of an aging Czech bachelor and a cute Russian kid first came out it was cheered for helping salvage the international rep of Czech films. I haven't watched it in a while (but it's on Netflix, so I will get to it again soon). My sense, though, is that it hasn't aged that well and is now seen as kind of syrupy. It's still worth a look for the sumptuous shots of what was intended to be pre-revolutionary Prague. I'm sure I will love it again once get a chance to re-watch it. 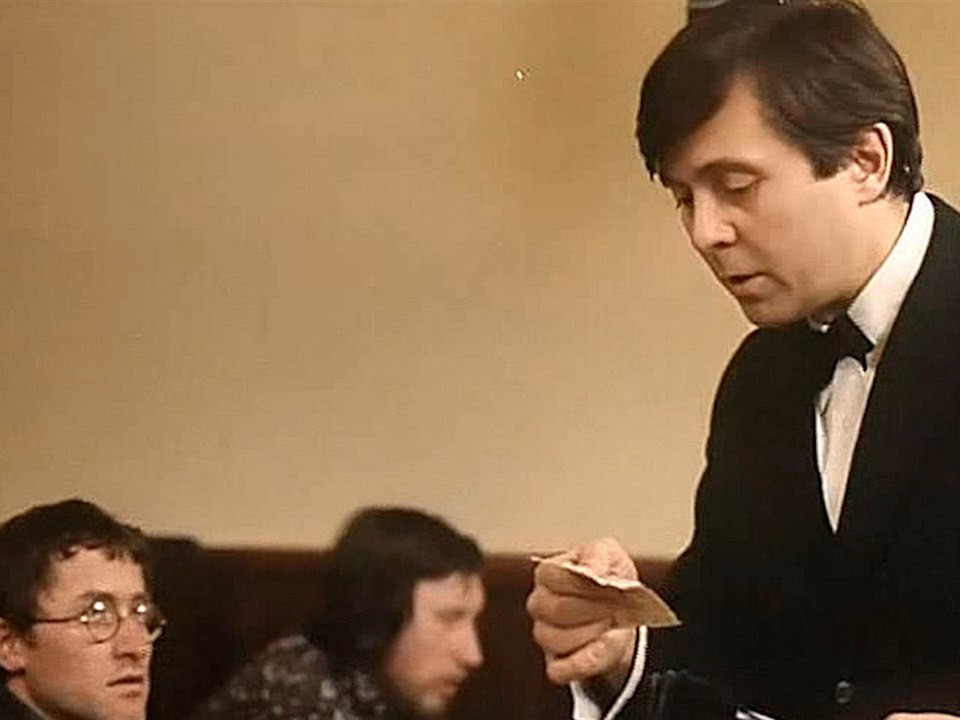 That's Dalibor (actor Josef Abrhám) posing as a waiter in a classic scene from 'Run, Waiter, Run!' (Vrchní, prchni!). The basic idea is that he asks customers to pay and then pockets the money, but the deception lands him in increasingly more complicated situations. 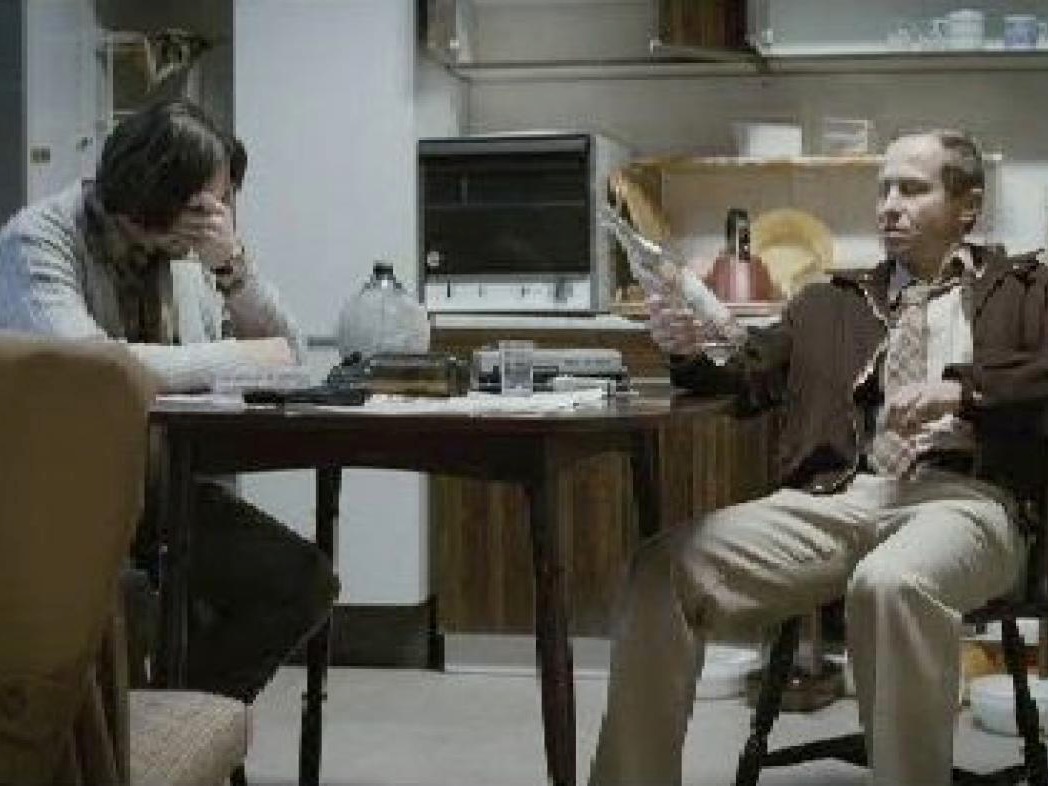 A hyper-realistic night of drinking from the dark and powerful 'Walking Too Fast' (Pouta). Angry StB agent Antonín Rusnák is seated to the right (played by actor Ondřej Malý). The film follows Rusnák's hate-filled descent into madness.

David Ondříček’s hugely influential film set the standard for the ensemble-driven, life-of-a-twenty-something chronicles that for a time became a staple of post-Velvet Revolution Czech cinema. I re-watched the film on Netflix a few weeks ago and found that it really caught something of the still-raw look, feel and mood of 1990s' Prague.

Miloš Forman’s bittersweet story of unrequited love between a naïve girl from a small factory town and her more sophisticated Prague crush. I consider this to be Forman’s finest film, effortlessly conveying both the innocence and the hopelessness of those gray days of the mid-1960s. You'll be hooked from the opening song, "Hooligan."

Maybe I’ll write a personal letter of thanks to Netflix for adding this beautiful film by director Jiří Menzel to their collection. I’d heard for years from Czech friends that I needed to give it a watch, but for some reason I avoided it. How good could a film about a “sweet little village” really be? Don’t make my mistake. It’s hysterically funny and highly moving, and a fitting successor to all those great films from two decades earlier. It’s firmly lodged on my "Top 10" best films ever list.

Director Věra Chytilová’s classic from communist times about young families who buy apartments in the new high-rise apartment blocks going up on the edges of town only to discover how poorly constructed they are -- and how the shiny, brand-new apartments don't always translate into shiny, brand-new lives. It’s mesmerizing from the opening shot on. 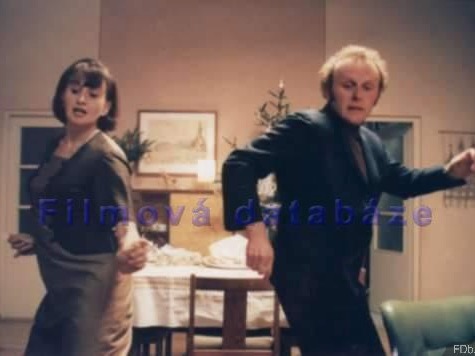 This is one of my all-time favorite scenes from the movie 'Cozy Dens' (Pelíšky). Actress Eva Holubová, a teacher looking for a husband to help raise her son, and Jaroslav Dušek, her collaborationist colleague at school, dance very awkwardly to Karel Gott's 'Trezor.' 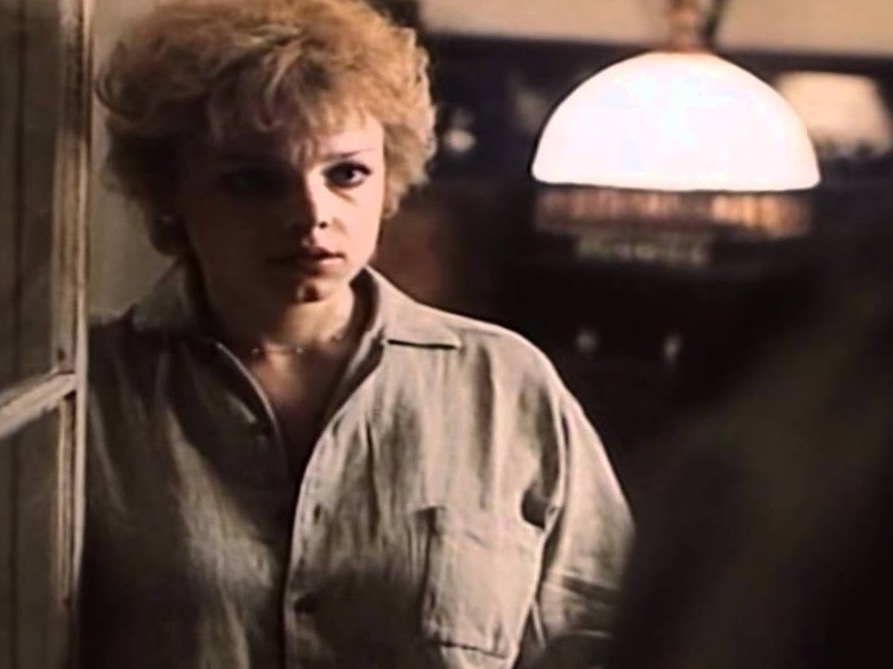 Eva (actress Veronika Jeníková) from the film 'Bony a Klíd.' It's an odd romp through the underworld of late-stage communist Prague. I'd forgotten about the scenes where she unbuttons her blouse and unveils a lot more than that when I screened the movie for a class of American university students. Hilarity ensued.

Popular slapstick comedy, a collaboration between director Ladislav Smoljak and writer Zdeněk Svěrák, tells the story of a sex-addicted bookstore manager who masquerades as a waiter in order to cheat restaurants and make ends meet (yes, that’s basically the plot). The film might offend if viewed purely through a #metoo lens (the main character is far from perfect), but it’s also very funny in spots. I laughed out loud a few weeks ago when I cued it up again on Netflix.

Hugely influential Czech road movie starring a young Anna Geislerová, who hitchhikes her way to hopeful freedom. The Ride captured something of the optimism and spirit of those early post-revolutionary years.

I’m embarrassed to admit I missed this movie when it debuted and won several Czech film awards. One of my criticisms of Czech period dramas generally is that they are often over-stylized: the actors are too glamorous, the settings too lush. This film, set in the gray, claustrophobic confines of 1982 Prague, gets the feel just right. The basic plot concerns a hardcore state security (StB) agent who’s determined to ruin the life of a dissident writer, but the story is much more about the officer’s meltdown when he fails to bend every character in the film to his will. Something about a cop self-destructing when he loses control felt very timely in our current social-justice moment.