I've associated Polish food with Christmas for many years. Though I was born in the American Midwest and have no Central European ancestry (that I know of, at least), my stepfather is Polish-American. From my teenage years on, Christmas Eve dinner in Ohio (see map, below) revolved around traditional Polish holiday dishes like mushroom soup (grzybowa), pierogi, and fried fish. I've come to really look forward to the annual feast. A couple weeks ago, Metro USA asked me to write a short article on popular Polish foods. It wasn't intended to be a holiday meal primer, per se, but I used the chance to wax lyric about some of my favorite end-of-the-year treats.

Top Photo: My parents' Christmas tree in Ohio has ornaments from both Prague (Praha) and Poland (Polska) -- reflecting where I live most of the time as well as my stepfather's ancestral home country. Photo by Mark Baker.
Posted in Diversions and tagged Christmas, dinner, fish, Food, holiday, home, pierogi, Polish.
Add a comment 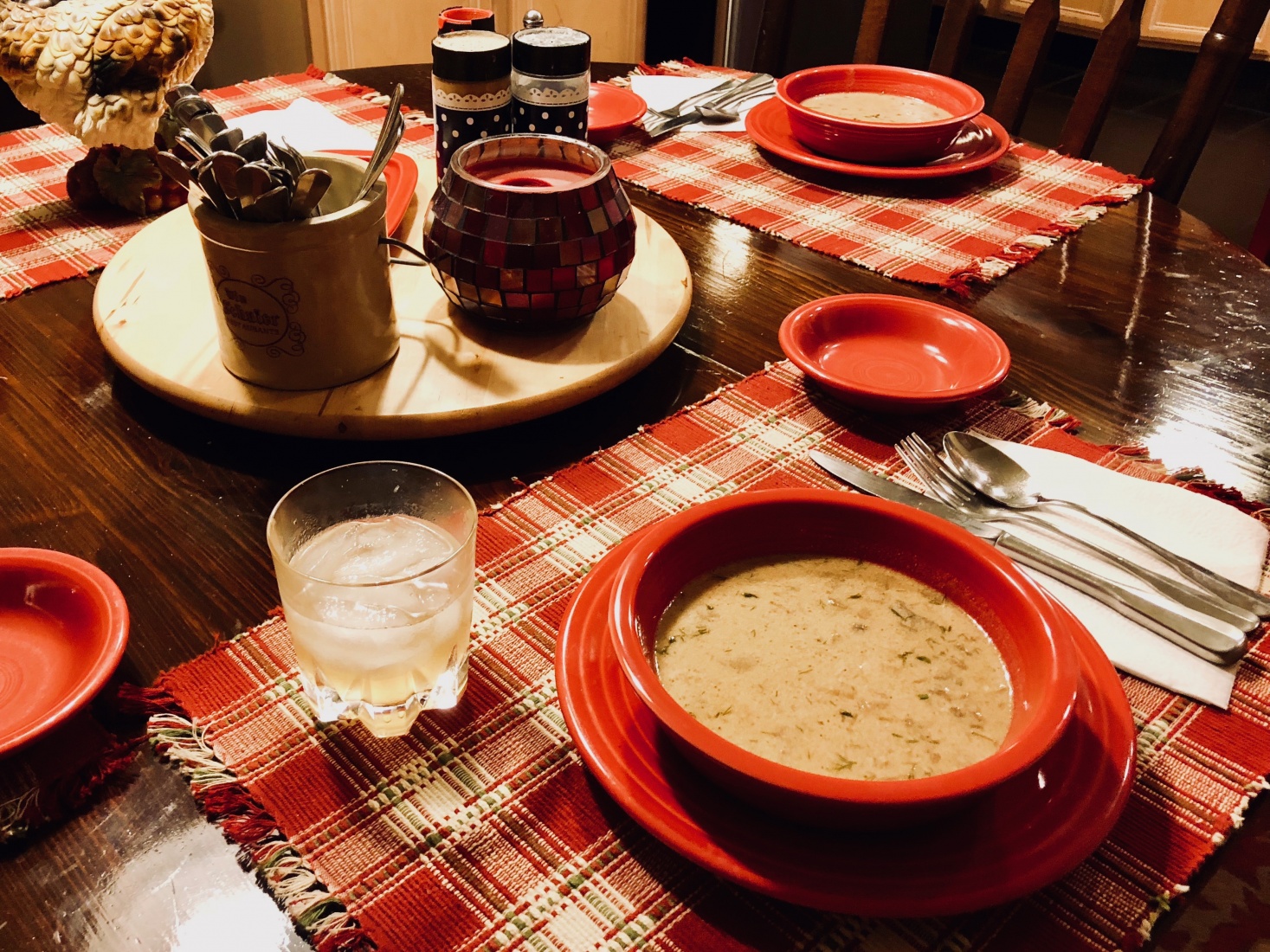 In Ohio, at least, people of Polish descent eat mushroom soup to start the Christmas Eve meal. This year, I was in charge and made a soup comprised of button mushroom, dried porcini, sour cream and dill. It was pretty good. The whiskey sour to the left of my bowl is optional (but highly recommended). Photo by Mark Baker. 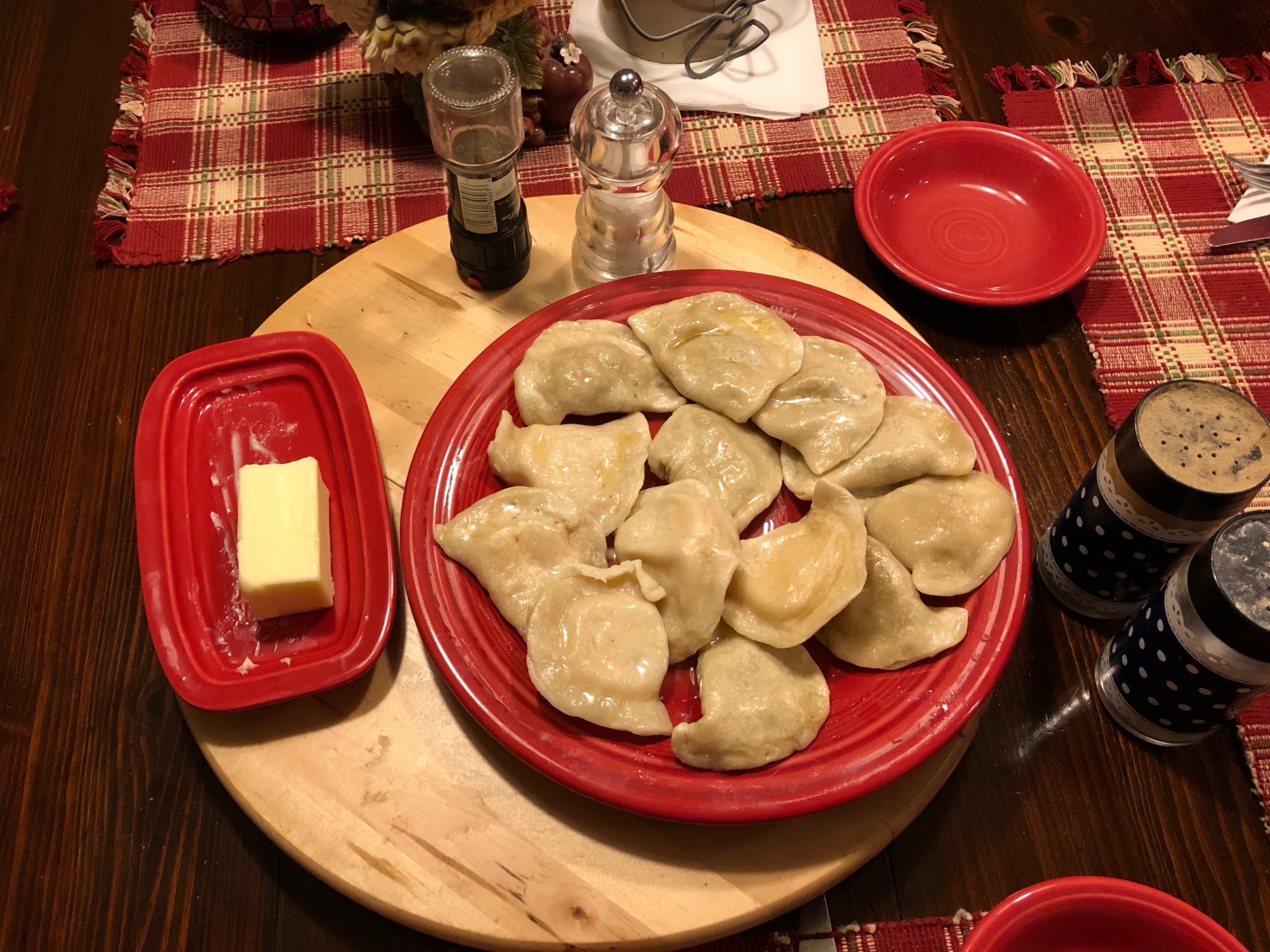 A plate of pierogi -- half of them stuffed with cabbage and half stuffed with potato. The stick of butter just sort of snuck into the shot somehow, though the pierogi are often cooked in butter before being brought to the table. Photo by Mark Baker.

Thanks to their popularity among Poland’s long-standing immigrant population, pierogi are as closely associated with Polish cuisine as pizza is to Italian. These are tiny dough pockets, traditionally stuffed with cottage cheese, potato, cabbage, or ground meat, and prepared either boiled or (occasionally) fried.

Pierogi are naturally delicious, but the key to their popularity is versatility, both in terms of what to stuff them with and when to eat them. They make a perfect between-meal snack or light lunch or dinner. They’re classic peasant fare, but also a staple (the meatless varieties, at least) at Christmas Eve dinners at Polish households everywhere (including my parents' place in Ohio). As for the stuffing, well, these days, just about anything goes. In addition to the classics, we’ve seen fruit fillings, mushrooms, cheeses, and even bison meat.

A comfort-food cousin to pierogi (and similar to Jewish latke), Polish placki are nearly as well known and just as delicious. The key to the perfect potato pancake is in the grating, and normally the finer the better. The grated potatoes are usually mixed with flour and egg, and flavored with onion or garlic. They’re fried to a crispy brown in a shallow layer of oil over the stove, and eaten – as a snack or side – with a shake of salt and dollop of sour cream. 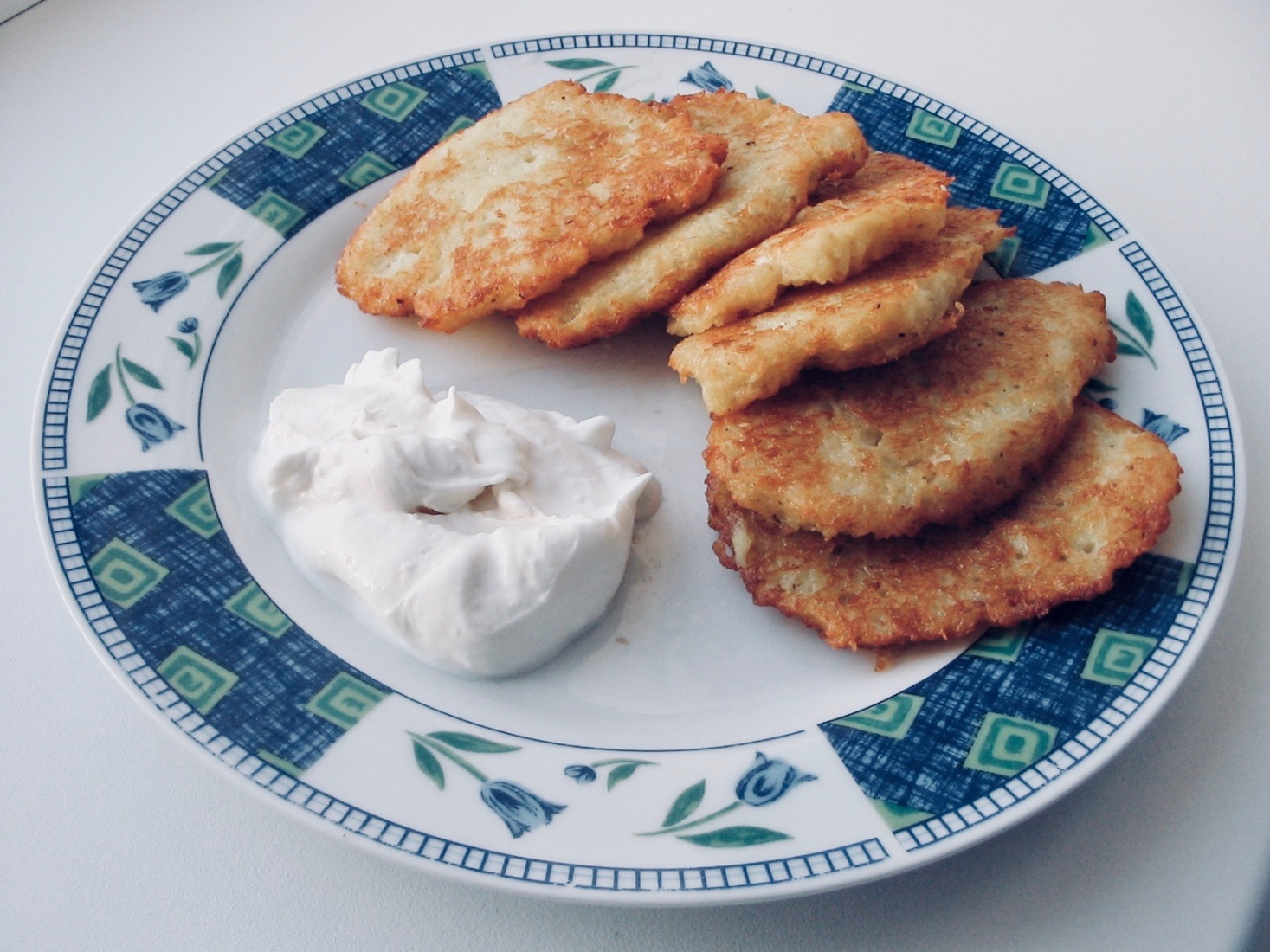 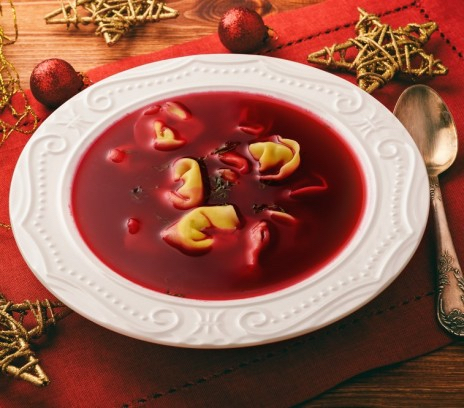 A bowl of Polish barszcz is typically thinner and clearer than the 'borscht' served in neighboring Ukraine and often, like here, served with a small pastry to add body. Photo credit: smakizycia.pl 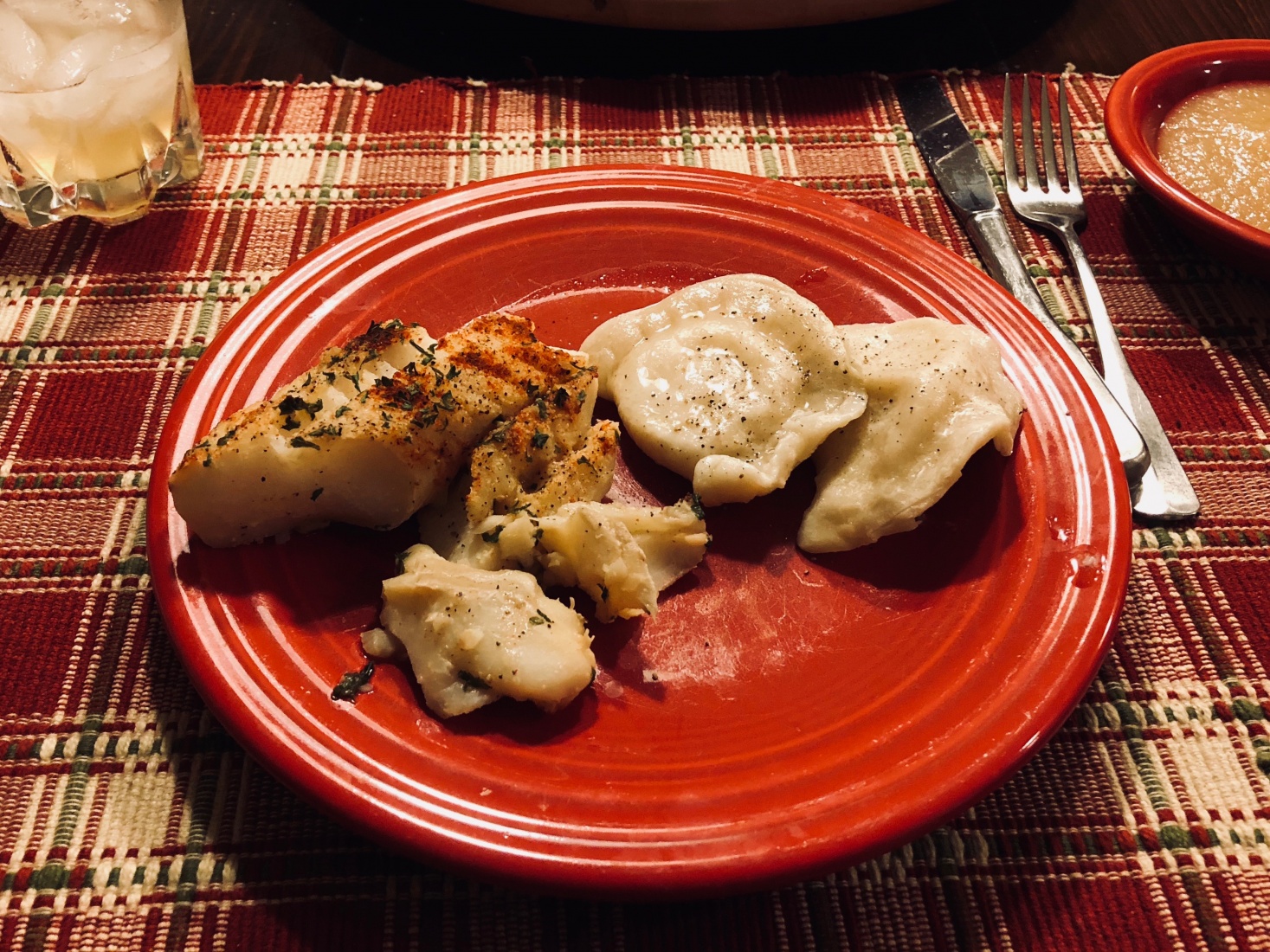 The main course for Christmas Eve is always fish. Normally, this is served fried, but this year we went for something a little different. Spiced and baked -- served here with a side of pierogi. Photo by Mark Baker.

Kiełbasa is another Polish word that’s entered the English language through the stomach. Poland has an infinite variety of sausages, and it would take a month to try them all. Traditionally, kiełbasa is made from pork meat, often spiked with garlic and pepper (and spices like marjoram or caraway seed), though beef and veal varieties are popular as well. Like pierogi, kiełbasa is another equal-opportunity delight – enjoyed both as the centerpiece of a special meal or served simply from a roadside stand as a mid-morning or after-work snack. At our house on Christmas day, the kiełbasa sits proudly on the main table next to the ham and roast beef.

Soups are an important part of every Polish meal, and there are as many Polish soups as days on the calendar. While we normally eat mushroom soup (grzybowa) for Christmas Eve dinner, the most popular Polish soup at Christmas and throughout the year is the sour beetroot concoction known nearly everywhere as borscht (and in Polish as barszcz). Every family has their own favorite way to eat barszcz, but unlike as in other Central European cultures where the soup is thickened with cream or flour, in Poland it’s almost always served as a clear, reddish broth. To make the soup more filling, the cook may serve it up with a side pastry stuffed with cabbage or meat, or add some tiny meat dumplings to the brew. 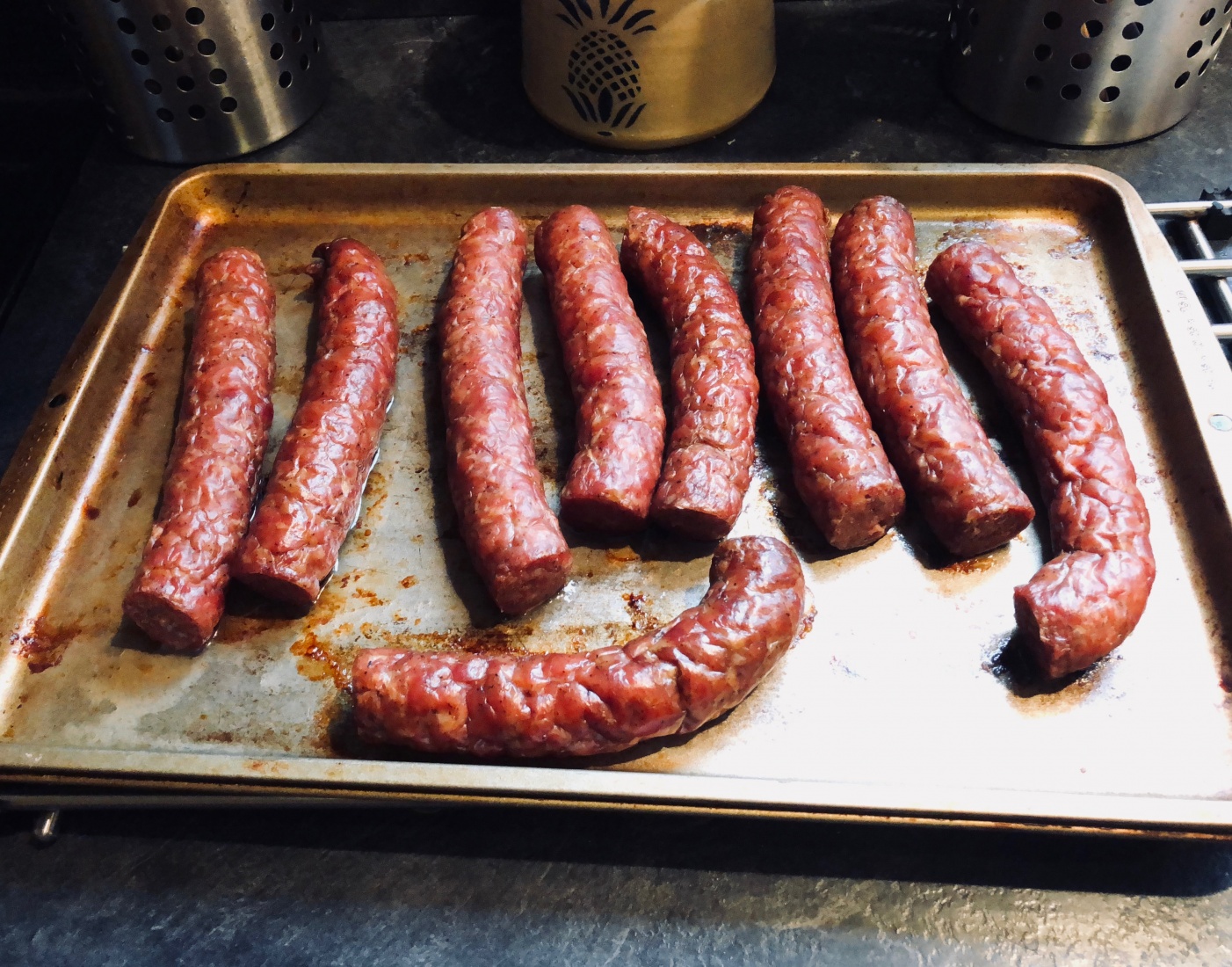 Kiełbasa, as a meat dish, isn't normally eaten on pious Christmas Eve, but rather saved for Christmas Day. My mother sort of warms it/cooks it in the oven the day before. It tastes much better than it looks here. Photo by Mark Baker. 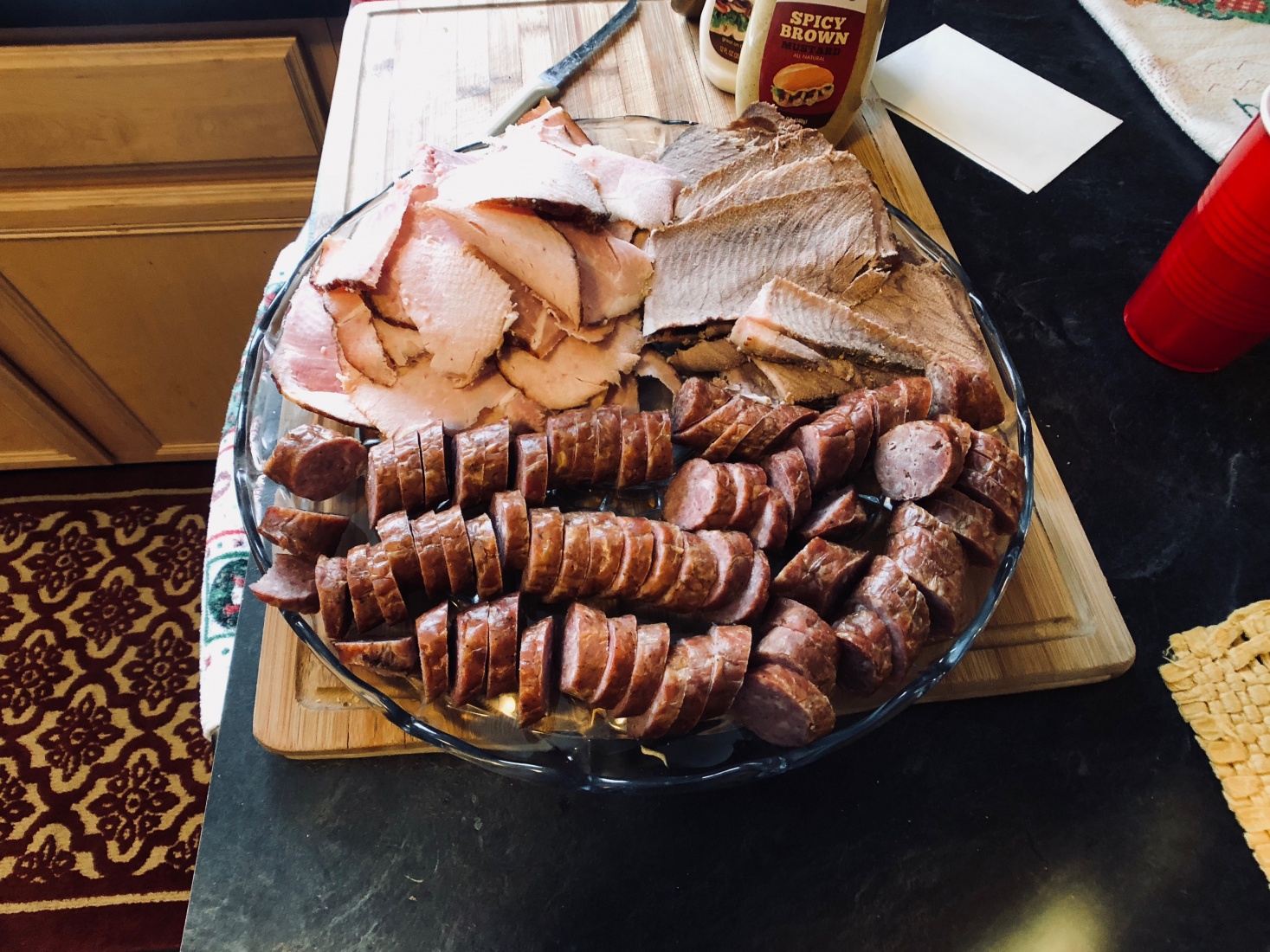 Slices of kiełbasa, alongside the roast beef and sliced ham. Meat is generally shunned on Christmas Eve, but embraced on Christmas Day. Photo by Mark Baker.

It’s no secret Poles love their wódka, and a bottle of high-octane spirit is a familiar sight on any Polish dining table. Vodka is normally drunk neat as a shot, and can be taken before, during, or after the meal. Outside of meal times, a gulp of vodka is normally followed up by a bite of pickle, bread, or herring.

For years, Poles mostly favored the clear, unflavored varieties, but these days fruit-infused and spiced vodkas are having something of a moment. Look out for vodkas flavored with lemon, cherry, pepper and, one of our recent favorites, quince (pigwa). An old standby, żubrówka (or ‘bison vodka’), is a rye-based distillation, uniquely flavored with a blade of bison grass from the country’s pristine Białowieża Forest. It makes a killer cocktail when mixed with apple juice.

The text here was drawn from a feature I wrote for Metro (US) on Polish food, called, appropriately enough, "The Absolute Best of Polish Eats." Find the story here.