(This story was originally written and posted in December 2017.)

My plan for this blog is to file new posts weekly, at the start of the week. Occasionally, though, I’ll post lighter or shorter stories throughout the week if something catches my eye. A few days ago, I visited the Kotva Department Store in Prague to take some photos and research a story on Communist-era architecture. As I meandered around the sprawling store, I walked into what appeared to be an unused display room off the 3rd floor. What I thought was an empty room, though, turned out to hold the strangest and possibly most challenging Christmas exhibition I’ve ever seen: “The Anarchist Cookie Shop.” 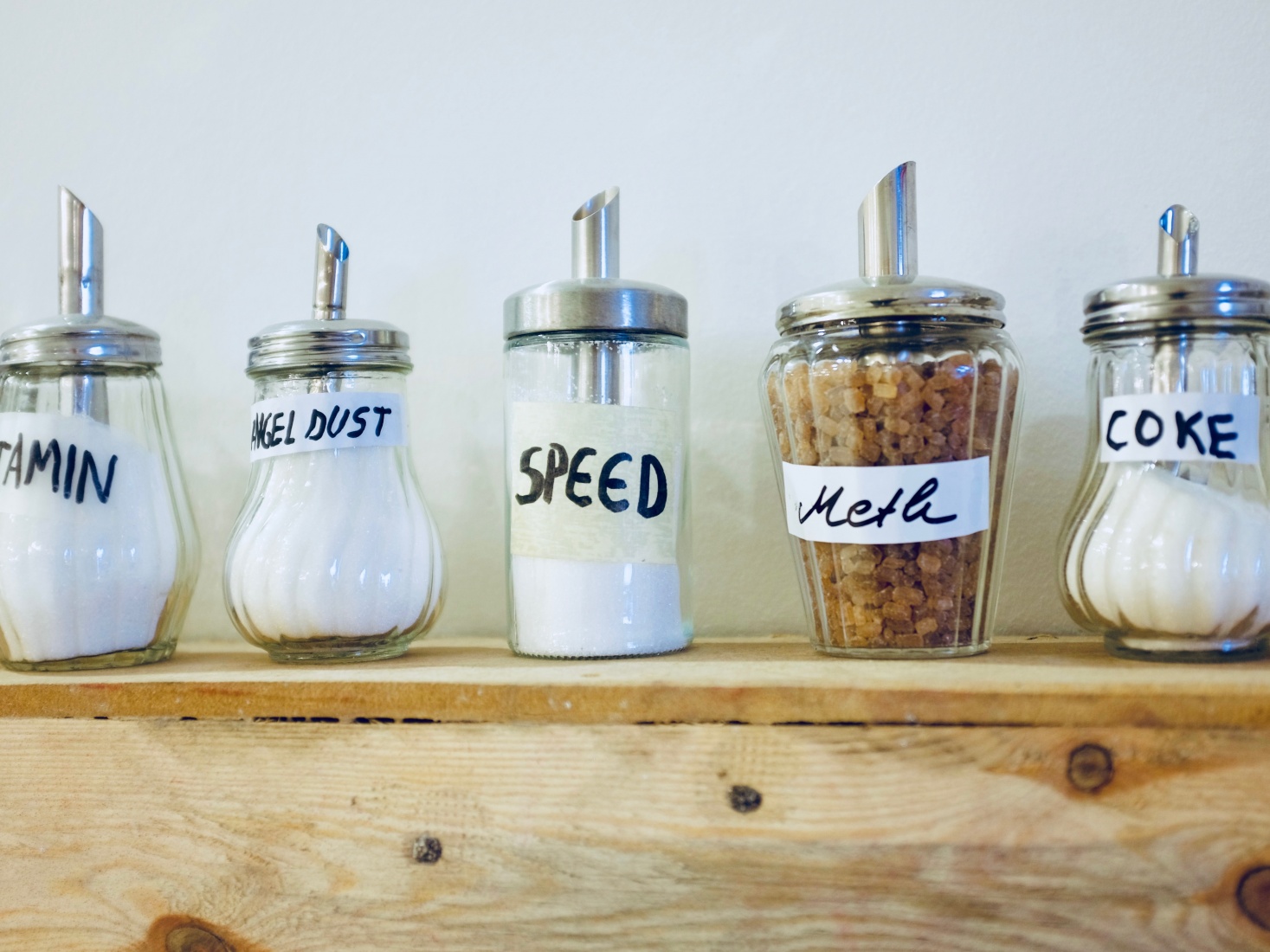 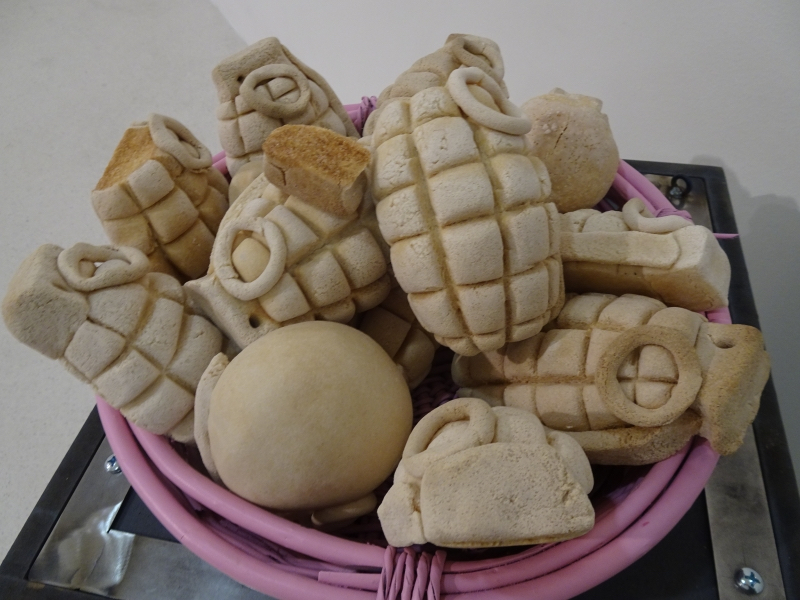 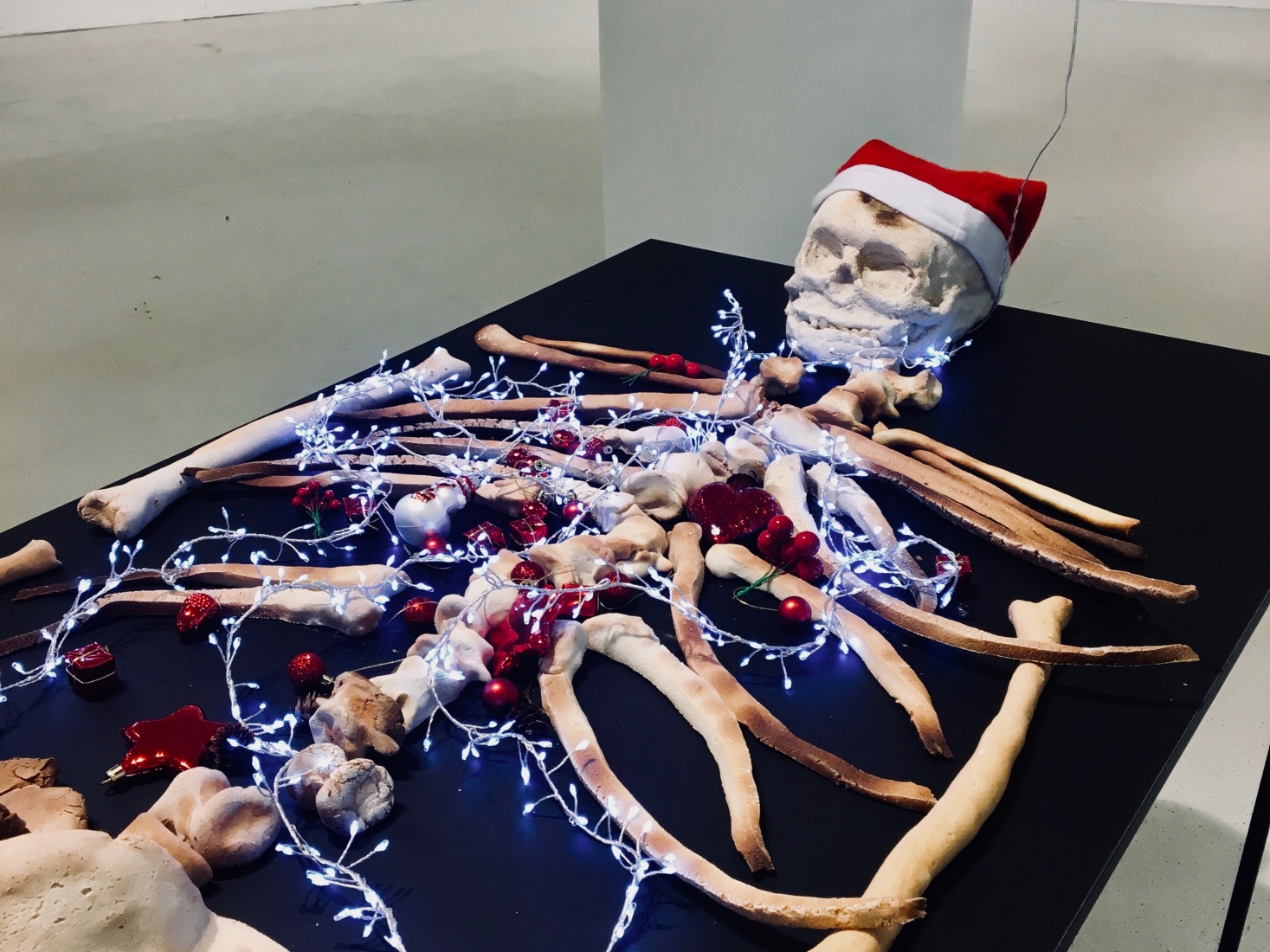 Santa's skeletal remains -- the victim perhaps of too many Christmas decorations?? Photo by Mark Baker. 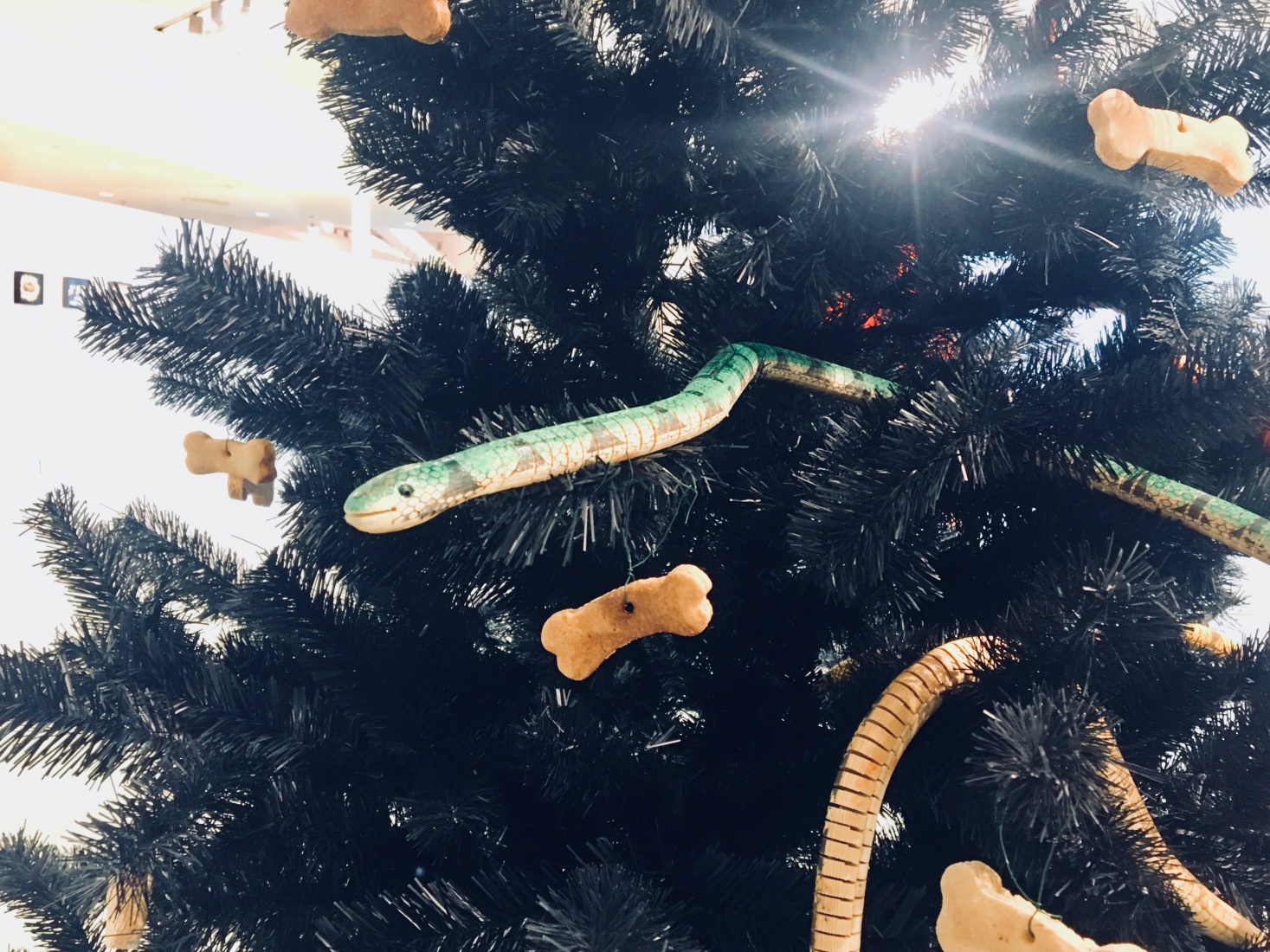 A snake slithers out of the beautifully decorated Christmas trees on display. Photo by Mark Baker.

I like the Christmas holidays as much as the next guy. It usually takes me a little while to warm up to the spirit, but once I’ve indulged in a couple of cups of hot wine on Prague’s Old Town Square by early December, I start to feel the festive mood. The November gloom suddenly lifts and, for a few weeks at least, I feel like a kid again.

The part about Christmas, though, that rarely cheers me up is the commercial side. I try to avoid stores and malls at any time of year. During Christmas, though, when shopping centers are stuffed with people -- and filled with phony, plastic tat and canned holiday music ("Have a Holly Jolly Christmas" is an earworm that actually hurts) -- I’d rather be anywhere else.

This is not a radical position. Everyone shares this sentiment, at least to a small extent. We also understand, I suppose, that department stores and businesses rely heavily on the end-of-the-year holidays for a substantial amount of their annual revenue, and we accept (and expect) the excessive over-hyping as part of the model.

So, imagine my surprise as I was walking around Prague's Kotva Department Store (see map plot, below) this past week and stumbled into an exhibition that not only refuses to indulge in the typically cheery, pre-Christmas bluster, but aggressively pushes back on it. 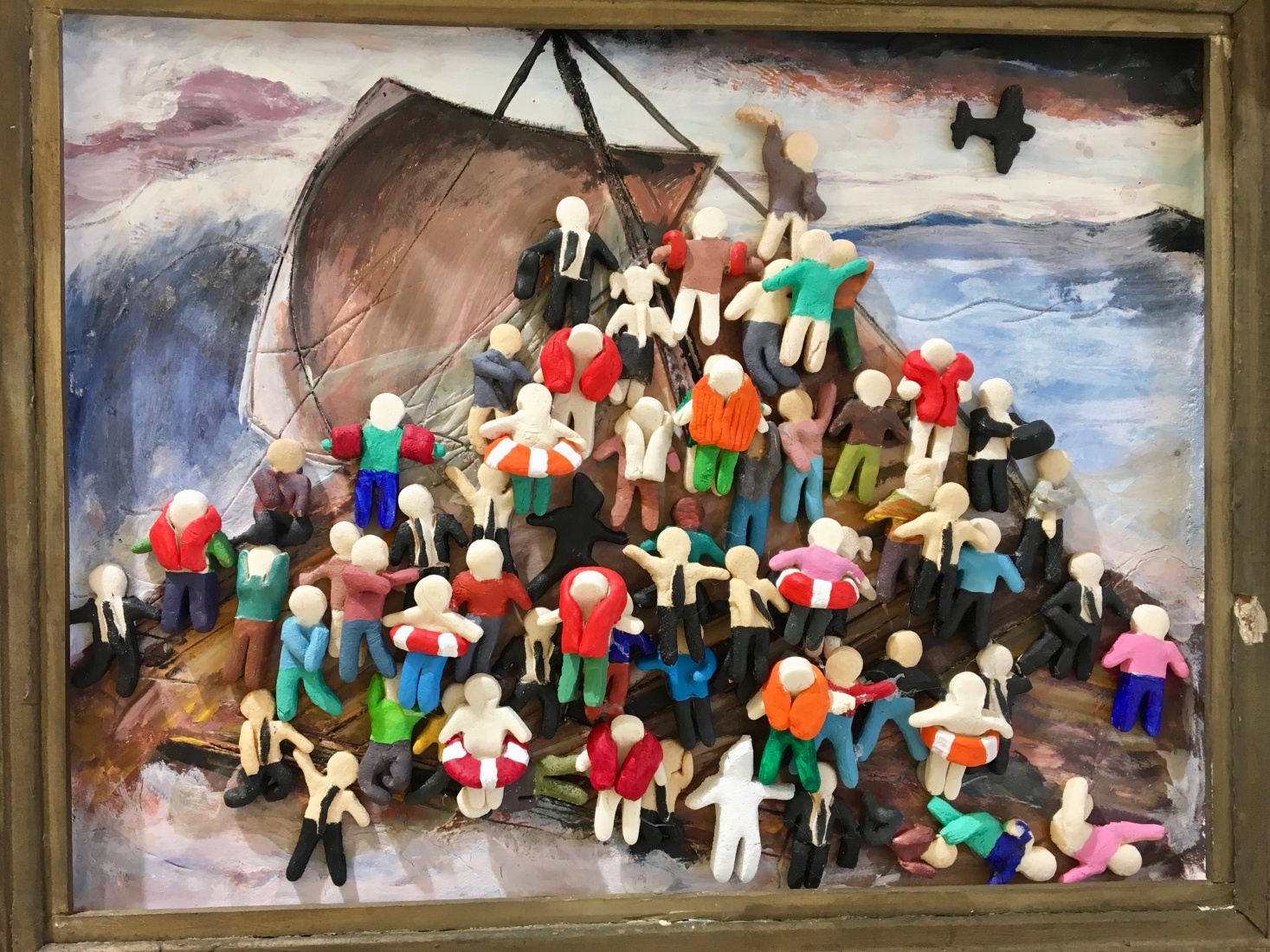 A familiar refugee photo theme, but this time the new arrivals appear to be Western tourists. Photo by Mark Baker. 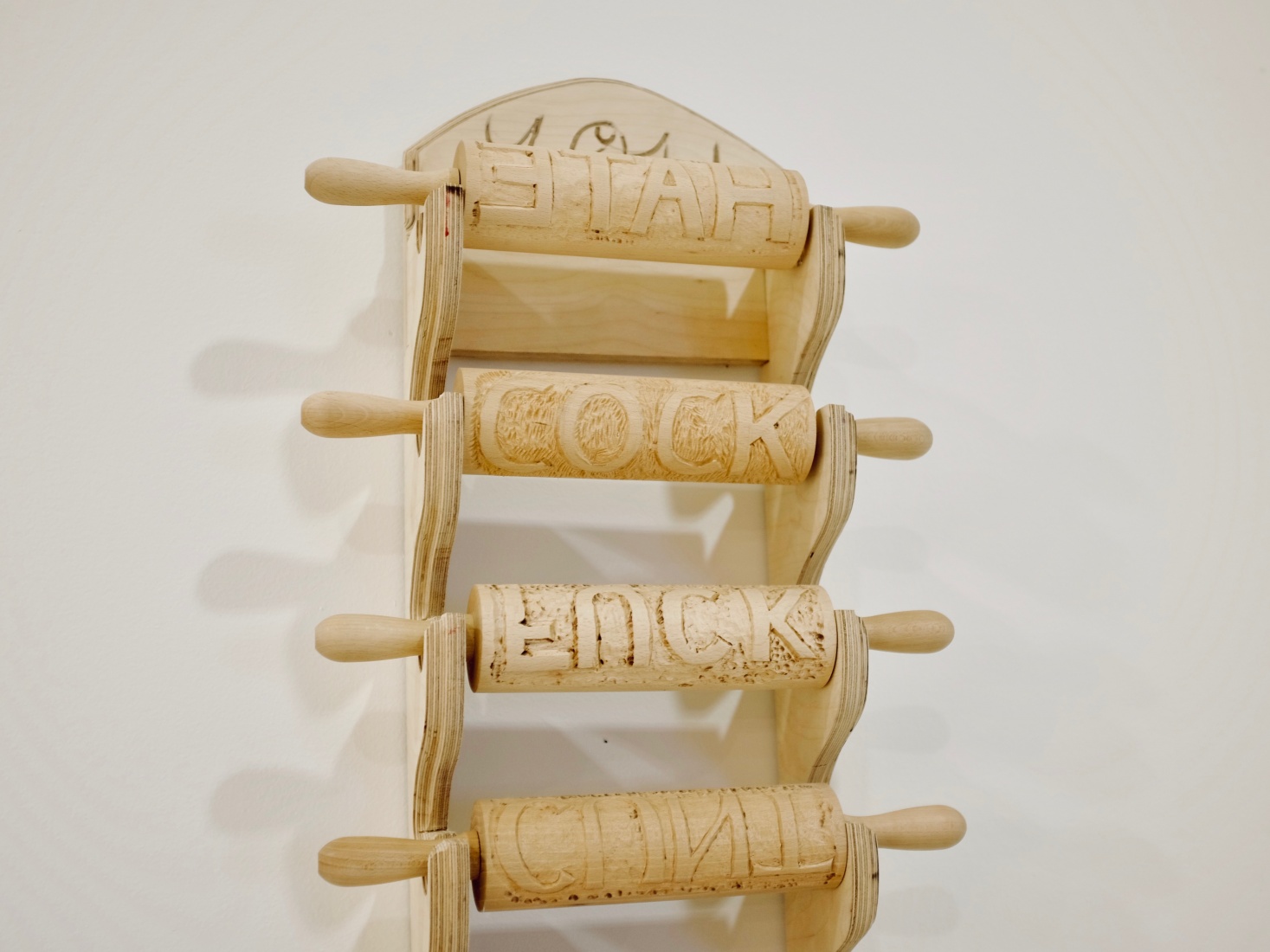 These are certainly not your mother's rolling pins. Photo by Mark Baker. 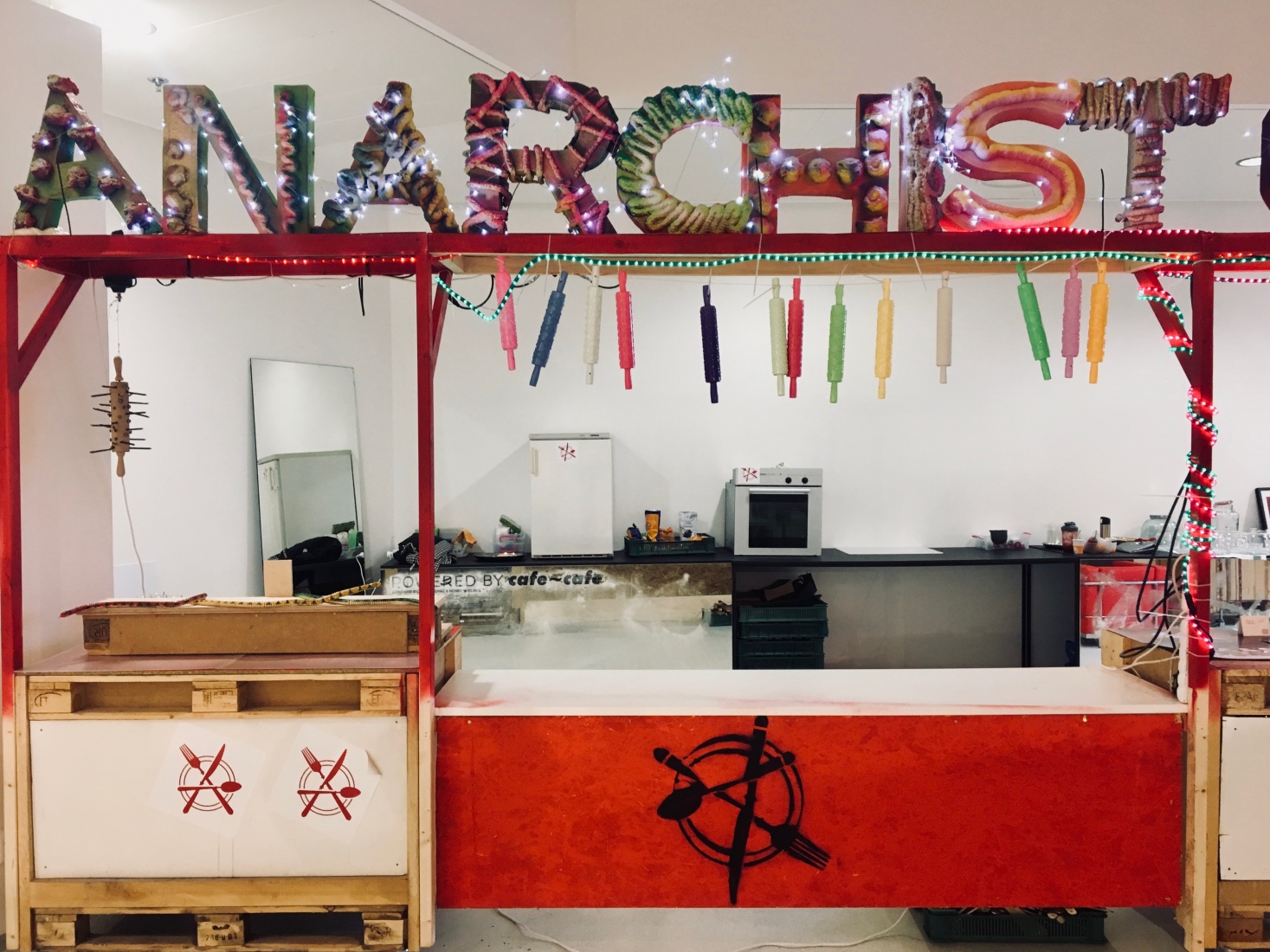 The Anarchist Cookie booth at Kotva, where you can learn about the exhibition and pick up some cookies to enjoy while you view the art. Photo by Mark Baker. 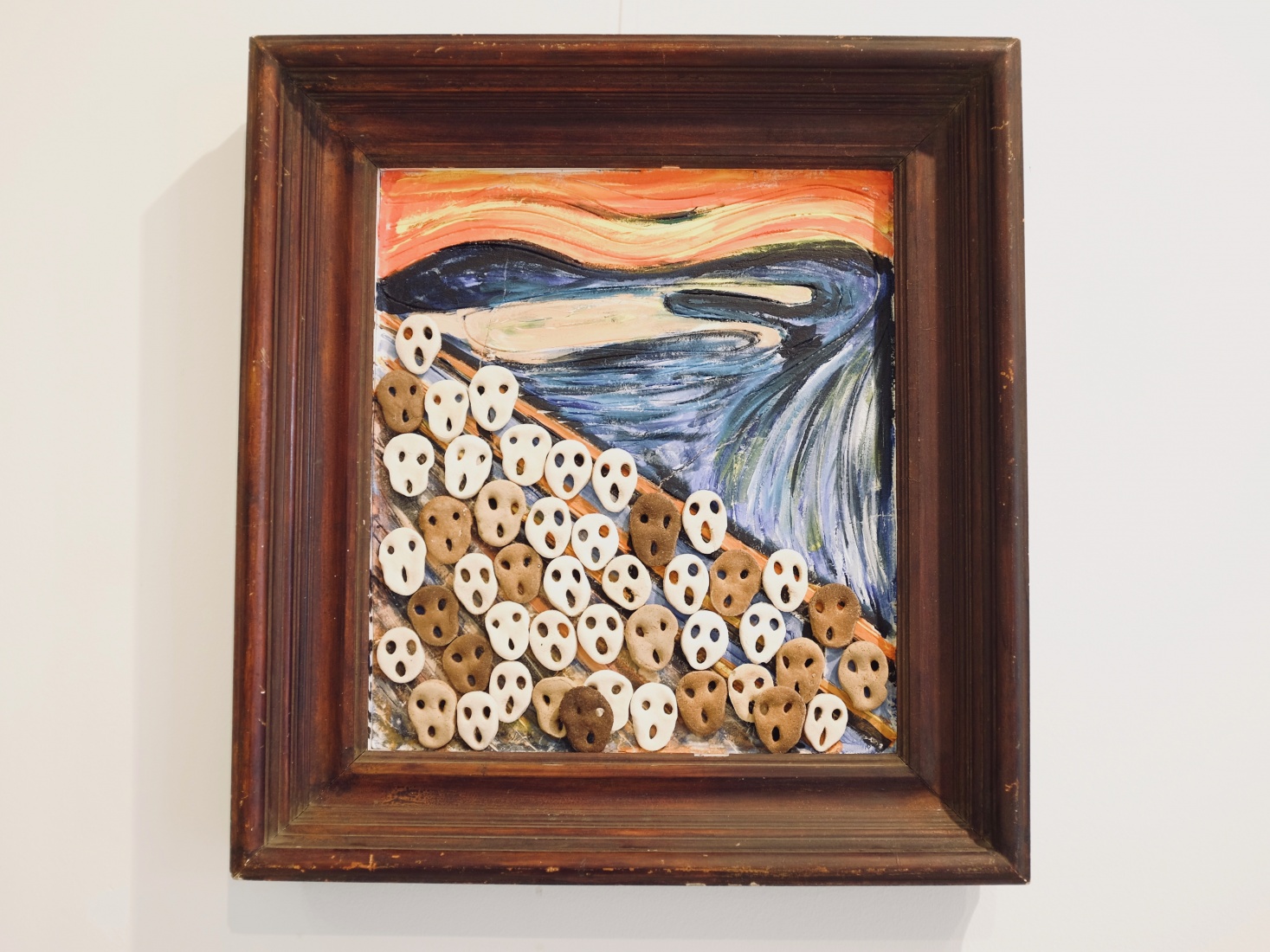 Edvard Munch is the inspiration for this cookie-lover crowd-pleaser. Photo by Mark Baker.

Czech-Canadian artist Marek Schovánek’s “The Anarchist Cookie Shop” is a kind of anti-Christmas holiday exhibition, where Christmas trees are presented upside-down and decorated with snakes and syringes. Santa’s skeleton lies in repose, his innards eaten away by holly berries and strings of Christmas bulbs. Christmas cookies (which you can get and eat on site) are shaped like guns and grenades; sugar itself is “crack cocaine.” And instead of the usual upbeat greetings like “Merry Christmas” or “Happy Holidays,” Christmas cards convey strings of words so profane I hesitate to list them on this blog.

Not all of the paintings, objects, and cookies on display deal with overtly holiday themes. Several reflect Schovánek’s preoccupation with wider societal ills like gun violence, overtourism and technology run amok.

I’ve posted a few of my own photos of the exhibition here to share the flavor. A respected Czech blogger on contemporary arts, Martin Fryč, also paid a visit. Here's a link to his commentary (in Czech) and photos. Some of the text below has been adapted from Fryč’s observations.

Schovánek is known locally for his non-traditional, in-your-face, shock-jock style. He developed the concept of "biscuit art" in 2012 in Slovenia on the occasion of Maribor holding the EU’s Cultural Capital that year (Schovánek’s exhibition was held in nearby Ptuj). The idea is to use cookies to visualize unresolved tensions in society, such as income inequality, protest culture and globalization – and where Christmas is concerned, over-commercialization. The cookie form, itself, is a parody of a parody, where viewers are transformed into consumers who are invited to consume art that highlights the ills of over-consumption (or something like that).

Whatever the idea, the effect for me was flabbergasting. Expecting to find a feel-good, department-store Christmas show, I was confronted instead by shocking images of guns and skeletons, and messages splayed on the walls like “Tourists Are Terrorists” and “Cull the Herd.”

It took a moment to process all of it, and then I burst out laughing.

Czechs are well known for having a dark, but richly ironic sense of humor. They relish in the opportunity to smash cherished myths and to prick oversized egos. The brilliance of Czech installation artist David Černý draws on this tradition. The Kotva exhibition pulls from the same nihilistic (or refreshing, depending on your point of view) cultural impulse. It's odd for a department store to lead the way, but our over-hyped, pre-Christmas shopping frenzy probably deserved to be taken down a peg or two.

Despite the big sign on the front of store, I noticed that Kotva’s  website didn't mention the exhibition. This plus the location of the show, at the back of the story in a little-used display area, leads me to wonder if perhaps not everyone at Kotva was entirely on board with the anti-holiday-shopping vibe of "Anarchist Cookies."

“Anarchist Cookies” is scheduled to run though January 6, 2018, at the Kotva Department Store, located in central Prague at Náměstí Republiky 8. It’s on the store’s 3rd floor, though housed off to the side and a little hard to find. The exhibition is open daily from 9am to 8pm, and free to enter. 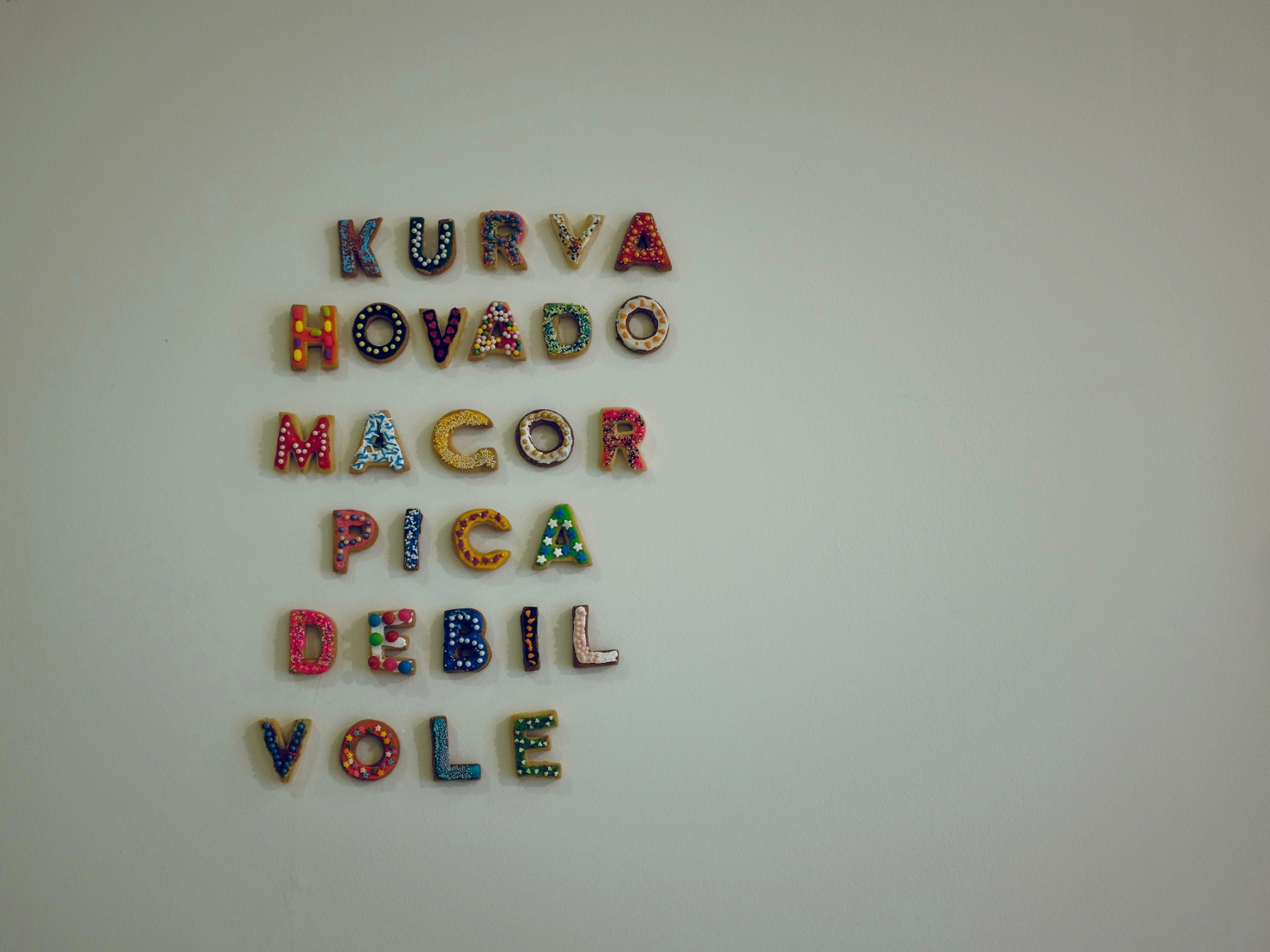 Words you're not likely to find in any decent Czech dictionary -- and I won't be translating them here. Merry Christmas! Photo by Mark Baker. 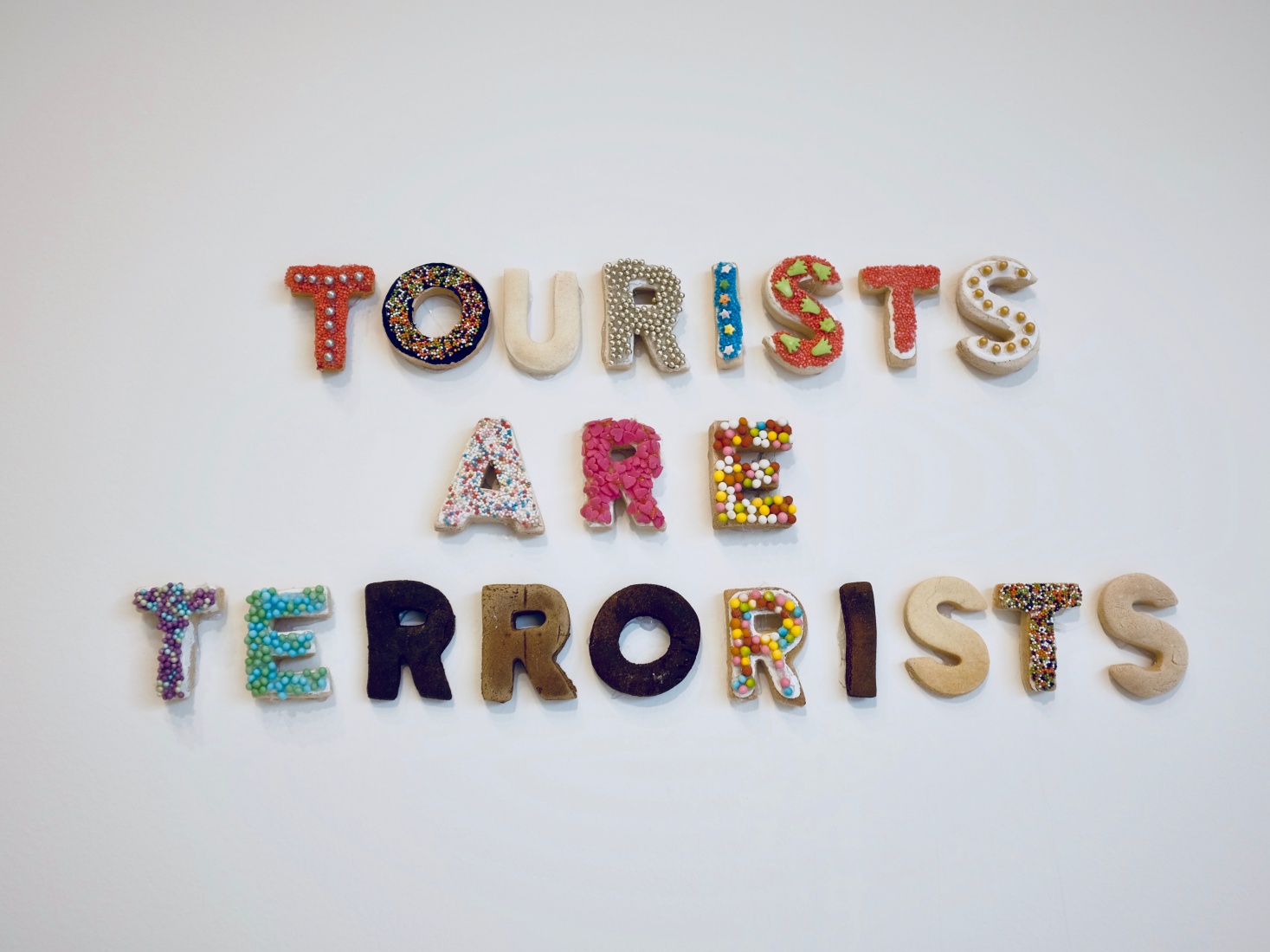 Tourism is never far from everyday consciousness in Prague, but this does seem to be an ill fit for a Christmas show. Photo by Mark Baker. 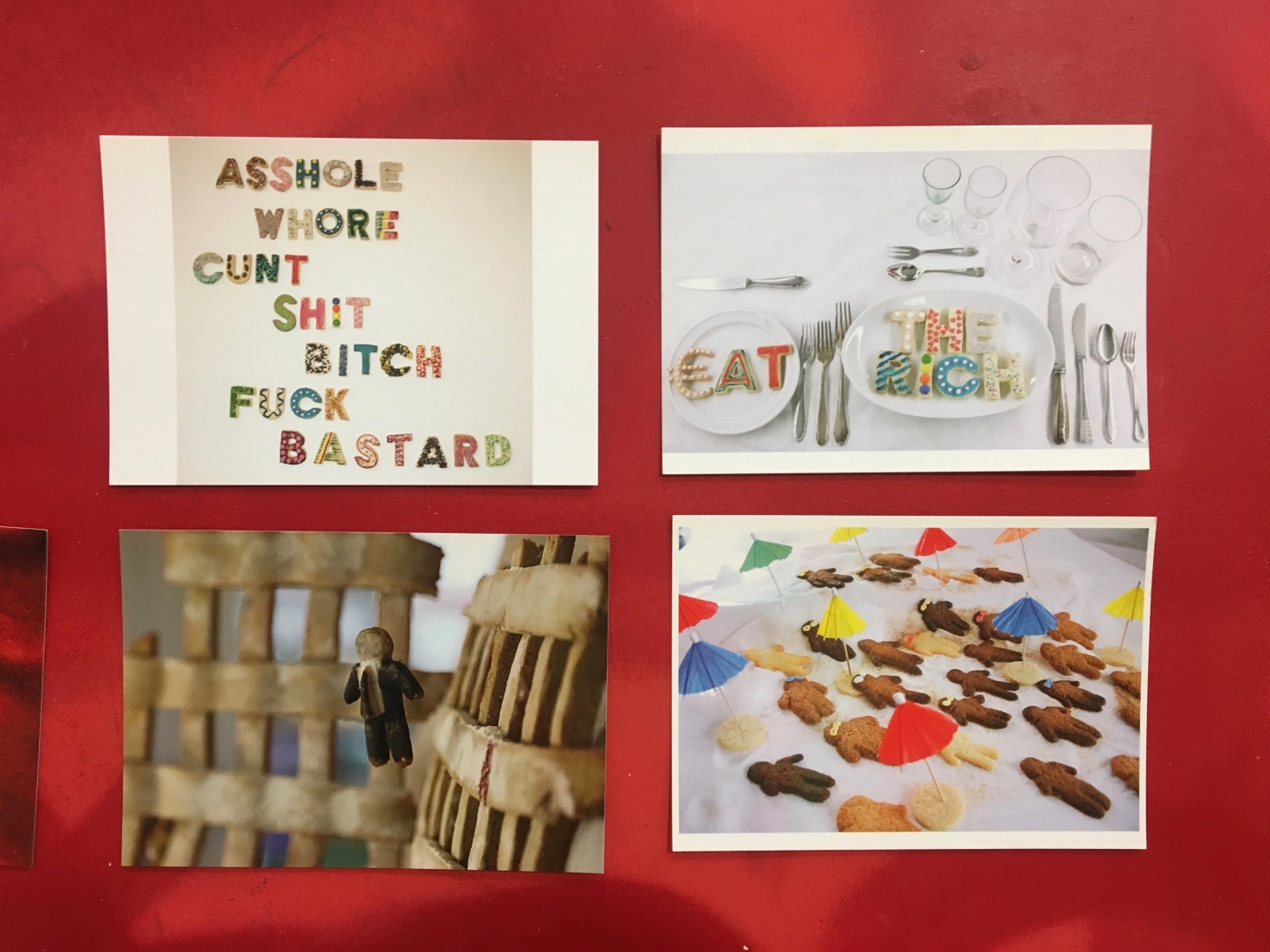 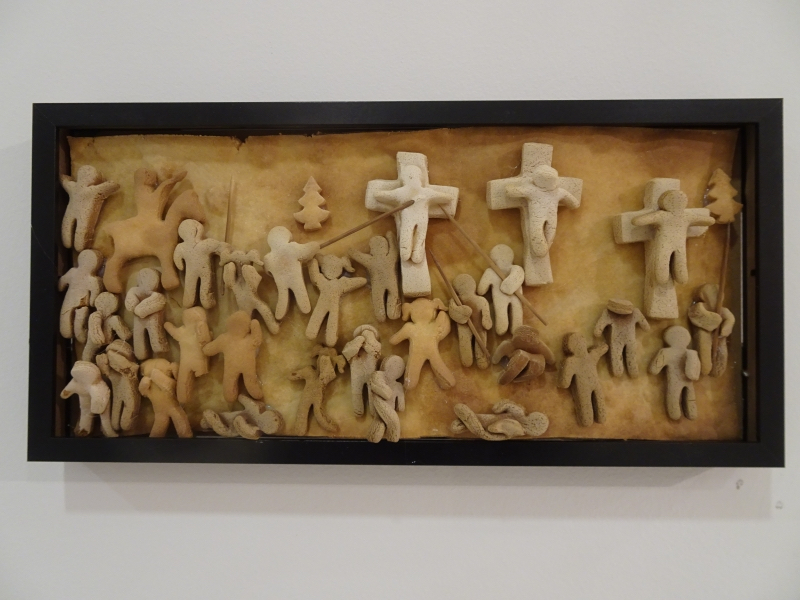 The commercialization of the Holy Lands appears to be the target here. Right? Photo credit: Martin Fryč.